~Bigger, Bolder but not Better~

It would have been easy and safe for developers, Dennaton Games, to just make Hotline Miami 2 a carbon copy of the brilliant Hotline Miami, but to their credit they didn’t take the easy route and do a copy and paste job, they tried to improve on the game going for a bigger more bolder game with much more focus on narrative, but sadly it doesn’t quite pay off. Hotline Miami 2 is still a super fun, fast paced, brutal action packed game but very poor level design, oversized maps and a confusing nonsense plot make your time with the game a very frustrating one.

When at its best Hotline Miami 2 is all about great small well designed maps laid out in such a way that allows for some serious fast and furious close quarters combat that gives players the freedom to tackle each stage in numerous ways, such as going in guns blazing, fighting like a man by sticking to fists while smashing doors in your enemies face or becoming a sword or knife wielding manic, slitting throats and cutting down anyone and anything in half that gets within your radius.

Don’t bring a knife to a gun fight!

That’s when the game is at its best but when the game strips you of that freedom the cracks in the game start to show and that’s when Hotline Miami 2 is at its very worse, they take away your freedom and force you to play a certain style. Some of the later levels when you control the army character easily has some of the worst level design in the game and there’s quite a lot of poor design to be found.

Levels are ridiculously oversized so much so that the camera won’t even be able to show all of the enemies at one given time which results in the player dying time after time to sniper fire halfway across the stage that you can’t even see, it’s annoying, frustrating and can’t be avoided very easily. It makes the game tedious to play because no matter how good you are, or if you’ve planned every move that will take place and perform the near perfect run its all very possible that it could go up in a cloud of smoke down to a simple tiny error not in your control. Well you do have a few tools to your disposal to help counter the annoying enemies. You can use the lock on system that targets your nearest enemy and you can quickly switch targets with the press of a button. It’s a must have as the shooting mechanics aren’t the best but it doesn’t work very well when under a lot of pressure, your other tool is the ability to seek out a further ahead view of the map, both are great additions.

Hotline Miami 2 takes place before and after the bloodbath in the first Hotline Miami, it spans between the year 1985 to 1991 as you get to take control of several new characters. Most of the characters have slight differences to their playstyle, for example you have Tony who is brutal with his fists and can kill anyone in one hit, the twins Alex and Ash, a deadly duo that you control as a single unit who combine together using a chainsaw and pistol. There’s many more you’ll play as but unfortunately you can’t choose your preference so the game lacks that variety and replayability that the first game has. This is because the game has a strong focus on telling a unique story following multiple characters and to do so the game had to sacrifice what made the first game so great. That’s why it’s so disappointing that the story is utter rubbish, that it’s so confusingly told you become bored and tedious of the narrative elements after each stage.

I need GUNS…lots of GUNS!!

It feels almost criminal that I’ve not yet mentioned the amazing 80s retro electronic soundtrack, that’s miles ahead of Hotline Miami. It suits the game perfectly, and it varies a lot from mellow and peaceful to darker tones that are faster and more serious. My personal favourite is from Act 2; 6th Scene called, Magic Sword – In the Face of Evil. I would literally sit there doing nothing as I turned the volume up and let the song consume my mind. Graphically there haven’t been any changes which is good because the game and its pixellated old school style is charming and has a lot of personality, seeing your body count on the floor as you finish a stage never gets old as you walk over the countless loss of life, some laid out from gunshots others curled up with lost limbs. The blood is very important in the game as you watch how it squirts and leaks from dead thugs you can’t help but think how brutal and sickening this would actually be if the game had more realistic graphics.

Overall Hotline Miami 2 fails to live up to the first game which came out of nowhere with an original idea, with an interesting and mysterious setting and back story. Yet it is still a highly satisfying game with seriously additive gameplay. It’s easy to turn your nose up at the game at first glance, that’s exactly what a relative of mine did when he saw me playing but after I gave him a go we were both surprised at how easy and fast he picked things up and how much he enjoyed the fun addicting combat, resulting in him downloading the game free via cross play. I hope they learn the lesson that if it’s not broke, don’t fix it. 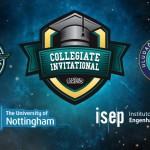 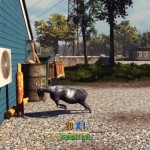 Goat Simulator heading to PS3 and PS4 in August

The 80’s soundtrack is a definite plus