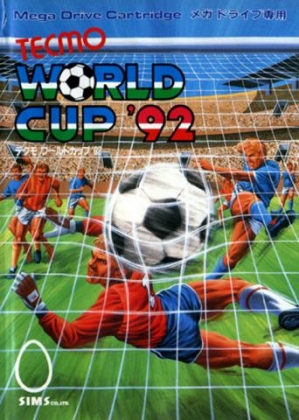 England actually had a pretty decent tournament this summer, reaching the Final of Euro 2020 before suffering a narrow defeat to Italy on penalties. The tournament itself got me energised to play some football games, leading to me heading back to the fourth gen in order to play some games I hadn’t previous played before. This led me to discovering Tecmo World Cup ’92 for the SEGA Mega Drive, and I decided to stick with it so that I could write about it this week. 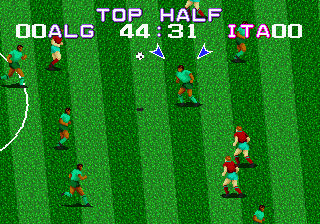 Tecmo World Cup ’92 is actually a port of an arcade game from 1990, back when the world was gripped with Soccer Fever during the dramatic World Cup held in Italy. The game received slightly above average scores, for the most part, with a lot of 6 out of 10s from a variety of different outlets. The SEGA Mega Drive/Genesis has its fair share of decent Football-Em-Ups, with the FIFA series and a port of ISS Deluxe being the main highlights. Tecmo World Cup ’92 focused a lot more on the arcade side of things rather than simulation, with it trying to be faithful to the arcade original. 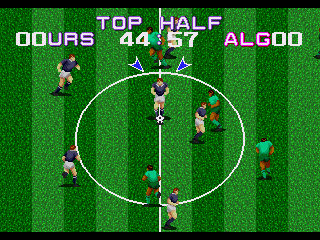 The arcade roots of Tecmo World Cup ’92 are markedly clear in the gameplay, with a two-button control scheme when you are both defending and on the attack. You can amend which buttons do what, but the default settings see the A and C Buttons used as pass and the B Button used as shoot when you are attacking, whilst A and C operate as tackle and B acts as switch player when you are trying to defend. The action is played as a quick clip, and it doesn’t seem possible to commit a foul, no matter how viciously you tackle an opposing player.

Those who like a touch more simulation and realism in their football games probably won’t enjoy that Tecmo World Cup ’92 goes for a more arcade-styled experience, but if you just want to stick a game on and get stuck right in, then the style being used here should likely be right up your alley. I found Tecmo World Cup ’92 to be pretty playable, although the difficulty can spike significantly the further into the game you get, leading to frustrating matches where you just get swarmed by opponents who promptly scythe you apart with vicious slide tackles.

I found scoring to be quite difficult, actually, as you don’t really have that much control over the direction and power of your shots. This often means that you kind of just have to “hit and hope” a lot of the time, with the goalkeepers seemingly having goal-stopping superpowers most of the time. It doesn’t help that sometimes your own keeper will gormlessly let a ball trundle past them like they’re Massimo Taibi with seemingly no rhyme or reason. I did have some joy by trying to fire the ball at the corner opposite to where the keeper was standing as if you were facing a certain way, it would hit a sweet spot that the keeper couldn’t reach, but it never really felt like anything other than chance. 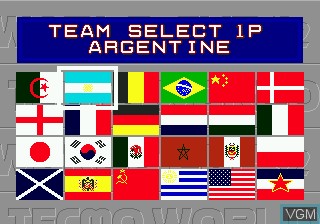 One of the oddest parts of Tecmo World Cup ’92 is that most of the teams don’t play in the correct kit colours, with teams like England playing in orange instead of white, whilst Hungary play in sky blue like Manchester City instead of their usual red. At first I thought this might be due to some kind of copyright issue, but then teams like Morocco play in their trademark red, and Brazil play in their traditional yellow shirts, so it might simply be a case of the people making the game not really knowing what everyone’s kit colour was and deciding to just take a stab and hope it was right.

The players themselves don’t have a lot of detail, but they look mostly fine and remind me a bit of the Centurion from Altered Beast in the way they run around, actually. We don’t really get much of a chance to see the stadiums, with every game being played on a generic looking pitch. Visually, Tecmo World Cup ’92 is pretty bog standard, but it does the job, for the most part, outside of the odd kit colour choices. There are better looking games from this era, but the visuals here are mostly fine, and they didn’t hamper my enjoyment of the game. 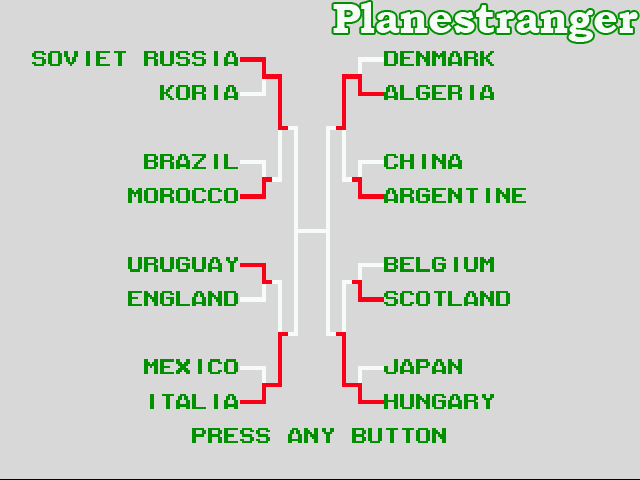 Outside of the standard ball kicking sound effects that you’d find in a football game, Tecmo World Cup ’92 has some musical tracks that play in the background whilst you are competing, and I have to say that I liked them. Beat Shige is apparently responsible for the music, and they’ve done a cracking job, to be honest. The songs have that classic retro feel to them, but they also don’t have that tinny feel that some Mega Drive soundtracks can sometimes be guilty of. The music is one area that Tecmo World Cup ’92 definitely shines. 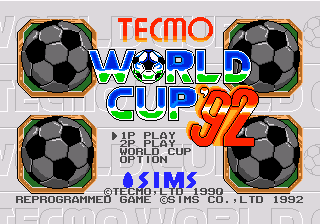 Outside of your standard 1-player and 2-player friendly games, the main meat of Tecmo World Cup ’92 is the World Cup tournament itself, which sees you try to finish high enough in your preliminary group before advancing to the knockout portion of the tournament. Back in 1990, the World Cup only had 24 teams, so you could finish 3rd in your group and still advance, which is something that can happen here as well. Strangely, I found that when I finished 4th in my group, I would always be eliminated, but if I finished 3rd or higher, then the 4th placed side would advance to the knockouts as well.

I’m sad to say that I never completed World Cup mode because the game just gets ludicrously difficult from the Quarter Finals onwards, with opposing teams cutting you to ribbons and your goalkeeper seemingly having half a flagon of ale before stumbling out onto the pitch. After a certain point, you just can’t make any headway, and the game kind of grinds to a halt. If the patient passing game is your preferred style of play, then you’ll probably hate the latter stages of Tecmo World Cup ’92. I don’t mind a game being hard so long as it’s still fun, but the World Cup mode crossed that line into just being a drag for me. If you like difficult games though, then you might like how stiff Tecmo World Cup ’92 gets from a difficulty perspective. 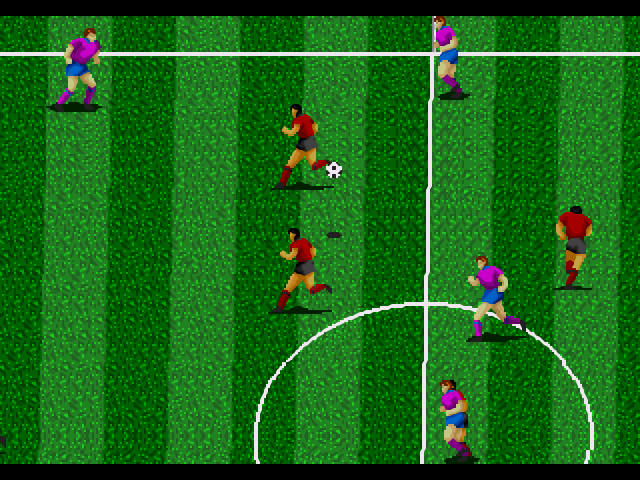 I’d have to say no, to be honest. Obviously, you shouldn’t emulate, and I would never suggest doing so, but it’d certainly be an easier way of playing this one considering that pretty much all the versions out on the market are for the Japanese Mega Drive, meaning you’ll need to import not just the game but the console as well, which is frankly just too much hassle for such a so-so arcade port such as Tecmo World Cup ’92. 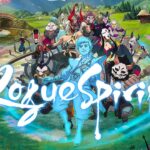 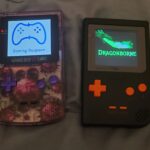