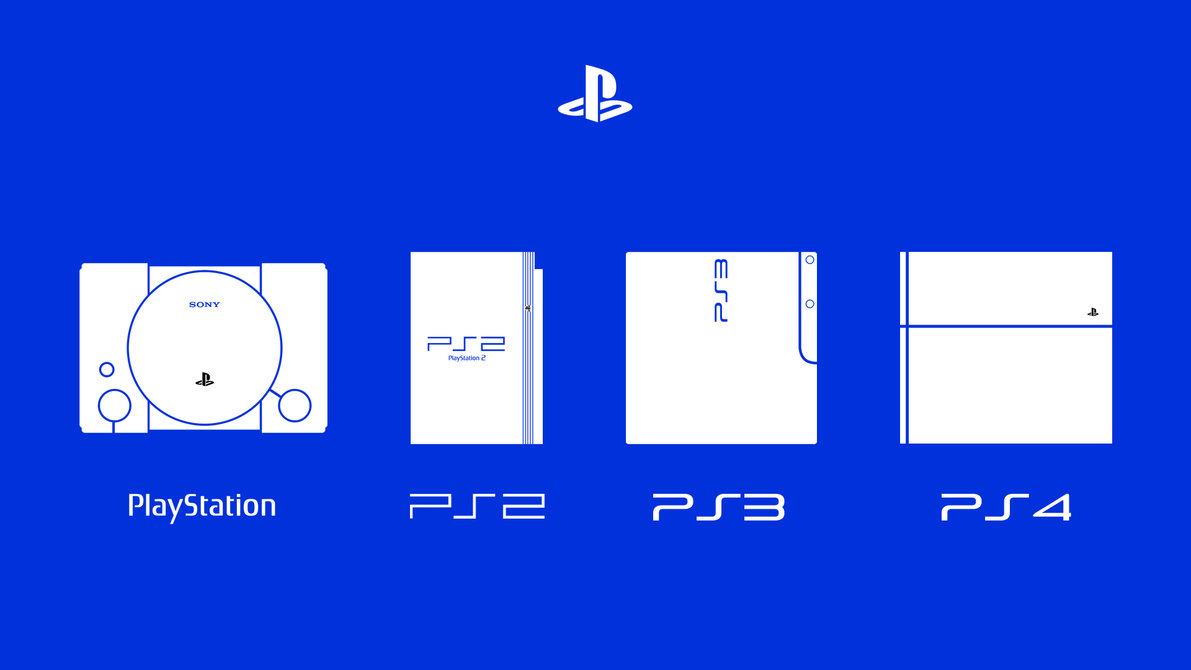 Welcome back everyone to my humble little feature, which is slowly but surely approaching the home stretch leading to the finish line. “D.G.M.’s Gaming Life Before Gaming Respawn Part 25” will focus on the Red Dead games, probably Rockstar’s most recognizable series of games, behind Grand Theft Auto, of course. I was never a huge fan of cowboys growing up, though the appeal of the Old West for me has increased in more recent years, particularly the theme of bounty hunting gunmen shooting up bad guys in the lawless West. That’s something both of the Red Dead games have in spades, though of course Red Dead Redemption is far superior in basically every respect. But let’s dispense with the comparisons and simply go over the two games individually, shall we? 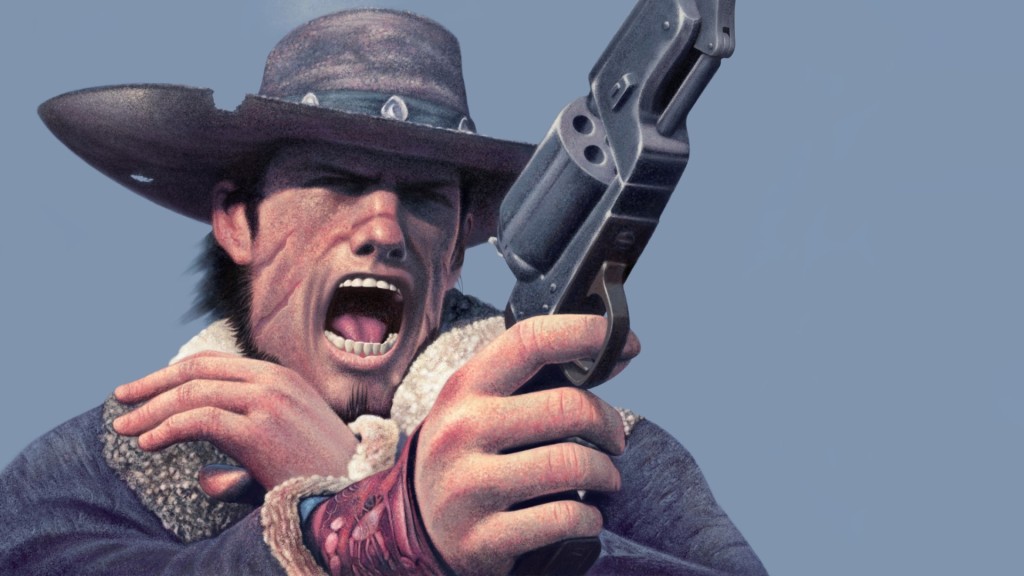 Even though this is the first game in the Red Dead series, it clearly has not earned nearly the same amount of attention as its spiritual successor Red Dead Redemption, for reasons that will soon become more apparent. Red Dead Revolver is a very linear, mission-based game taking place sometime in the 1880s, and you take on the role of the main protagonist Red Harlow, a bounty hunter who seeks to take his revenge upon the criminals who killed his father and mother when he was still just a boy. As Red, you will have access to a number of different firearms which are separated into three main categories: the sidearms consist of revolvers, the longer ranged weapons include rifles and shotguns, and there are even throwing weapons like knives, dynamite, flaming whiskey, and so on. Red controls well and is quite capable at doing away with the many enemies he encounters in each mission, and there are many of them.

A handful of the missions have you take control of other characters with their own weapons and skills: female rancher Annie Stoakes wields a rifle, gunslinger Jack Swift dual wields two revolvers with deadly effect, Red’s Native American cousin Shadow Wolf uses a bow and arrow, the Buffalo Soldier wields a powerful one-hit kill rifle, and one of the main villains, General Diego, has his own suped-up rifle as well. Playing as these other characters certainly helps keep things from getting too repetitive. Red is still the most versatile character given his wider selection of weapons, not to mention his “Dead Eye” skill that slows the game down and allows Red to place his shots on multiple enemies during shootouts. This function also comes into play when Red faces up to three enemies in these quick-draw duels where he must place more shots on his enemies before they land too many on him.

Generally speaking, this game isn’t too challenging, but certain parts can be quite frustrating. This one quick-draw duel in the last quarter of the game was the definition of cheap. Other missions where Red or one of the other main characters fights a bunch of enemies alongside a couple of NPC allies were extra annoying; letting even one of your allies die leads to a game over, which is harder to avoid than it sounds since these levels throw a huge number of enemies at you. Most of the enemies themselves are average, but certain boss characters sprinkled along the game offer stronger challenges. Some of these boss characters are overly exaggerated and almost cartoonish looking, like one heavily muscled dude who is somehow immune to bullets unless you hit him while he’s charging at you, a fat guy with a pig nose and a bunch of sticks of dynamite strapped around his body, and even a guy with an artillery cannon for an arm. This game definitely has a different and more over the top vibe compared to the game that followed it, that’s for sure. It’s a pretty fun game, but its linearity, plain story, occasionally cheap levels and challenges, and sometimes iffy hit detection keep this game from reaching the level of “exceptional”. Red Dead Revolver gets a score of 68%. 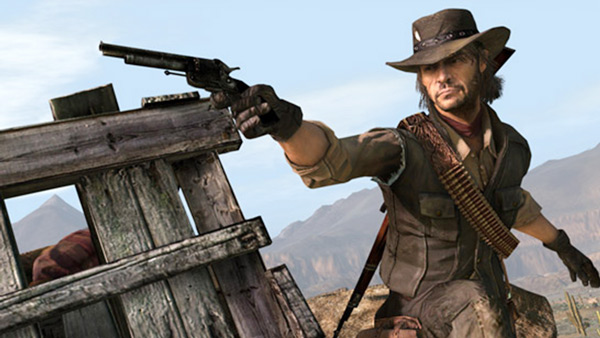 It’s no exaggeration when other gamers say that Red Dead Redemption is one of the best games ever made. I for one find it to be my favorite game from Rockstar, but that’s partly because I never got into the Grand Theft Auto games (never appealed to me). Red Dead Redemption is, for all intents and purposes, an Old West version of Grand Theft Auto, so instead of riding cars everywhere, you ride horses. But it’s also so much more than that. For one thing, the open world of Red Dead Redemption is enormous and is full of stuff to do. While most of it is empty desert or woodland, there are several towns and gang hideouts spread around, and even in the less populated areas there are treasures to find and wildlife to deal with, namely horses, wolves, cougars, bears, etc. And of course there are criminals to shoot all over the place and missing people to find in the many available side-missions.

Despite the sheer vastness of the open world, the graphics did not suffer from it. Other open world games on the PS3 that had considerably smaller maps like Infamous and Prototype still had noticeably inferior graphics when compared to those in Red Dead Redemption, which was impressive. Only the Batman Arkham series looked better, and the open world in those games were positively puny in comparison. The controls, while they took some getting used to and were occasionally unresponsive, worked well. Main character John Marston was capable of performing many actions like shooting enemies with pinpoint precision even while riding horses, and Red’s “Dead Eye” skill from the previous game returns as Marston’s skill as well. The mission variety is also pretty cool, with Marston taking part in shootouts, bounty hunting missions, rescue missions, sabotage missions, and more. And when you just want to pass the time, other activities like card games, arm wrestling, horseshoe throwing, watching “moving pictures”, and more can keep you busy for a good while.

The story, while seemingly very simple, is engrossing. The different characters Marston befriends and makes enemies of are as realistic as they can get, with characters flaws and endearing qualities aplenty. Marston is a respectable and seemingly pure of heart character, though as time goes by you discover he has a past that he can’t escape and still haunts him, yet he doesn’t give up on trying to make amends. Rockstar deserves all the accolades they’ve received for creating an Old West world which feels believable and has real, breathing people inhabiting it. Everything about this game just melds together perfectly: the drama, action, gameplay, missions, all of it is nearly flawless.

The DLC Undead Nightmare is also one of the best story-based DLCs (if not the best) I’ve played in any game to date. As Stephen has pointed out in his multiple lists revolving around zombie games, Undead Nightmare brings the zombie apocalypse to the Old West and succeeds with flying colors. While it is an alternate universe/what if scenario not directly tied in with the main game, most of the characters from the main game are featured and seeing how they react to the zombie apocalypse is quite amusing. The different types of zombie enemies on offer (both human and animal), along with a generous amount of missions available, make this DLC one for the history books and worth buying even if for some reason you’re not interested in the main game. I, of course, recommend both the main game and this DLC. The only negative opinions I have on the game are that it can get repetitive and it is quite drawn out, and the open world at times felt too big given how long it can take getting from one area to another. Still highly recommended. Red Dead Redemption gets a score of 95%.

So ends the Red Dead portion of my feature. Here’s hoping all these rumors of an upcoming Red Dead Redemption 2 are more than just conjecture, as I would certainly like to see another game set in this universe on current gen systems. While I feel it could have come a bit sooner, I’m just glad it appears to finally be making its way to us at last. However, I can’t help but wonder how Rockstar could possibly improve upon an already classic game. Making it too similar would not be ideal. Perhaps like in Grand Theft Auto V they’ll have multiple playable characters with hopefully unique skills/abilities to make the gameplay more exciting. Next week in Part 26 of “D.G.M.’s Gaming Life Before Gaming Respawn” I will discuss a rather random collection of movie-based games. Will they all suck, or will at least one of them prove to be surprisingly decent? Join me next week to find out, but in the meantime take a look at more of our site’s content to keep you busy:

Ian lets out his inner racer and burns some rubber in Trackmania Turbo, so see what he thinks about this game by checking out his review right here.

Michael has prepared a review for the remastered edition of République, which you can take a look at here.

Steve Gill reviews the remastered edition of Day of the Tentacle, a game that was apparently very popular back in the day that I somehow never heard of. If you’re like me and you want to get a good idea of what the hell this game is, or if you’ve played the game back in the day and want to know if the updated version is worth checking out, then take a look at the review here.

Alec, who clearly enjoys watching dudes beat the ever-loving crap out of each other in a most brutal fashion, takes a more hands-on approach by spending some time perfecting his MMA fighting skills in UFC 2. Check out his review of the game by elbowing or headbutting the link right here.

Ian also proves he’s a fan of generously proportioned females laying the smackdown on the forces of evil by partaking in a game that features those very same qualities called Nights of Azure. Find out how Ian rates this game by taking a look at his review here.

Finally, check out the latest in Stephen’s ever growing collection of lists focusing on zombie video games over here. 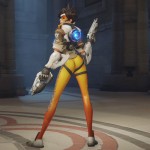 Sexualization in Video Games and Why People Should Stop Taking Offense 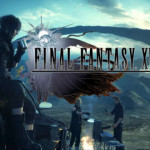