I come into this review from a slightly unusual position. I’m a massive fan of old school point-and-click adventures and I absolutely loved Maniac Mansion and the Monkey Island games (well the first two anyway), yet up until this point I’d never played the much-revered Day of the Tentacle. Oh I wanted to, but LucasArts never bothered with an Amiga conversion, and by the time I had my first PC it had long slipped my mind. Fast forward 23 years and I’m finally getting to play it, in shiny new remastered form. And I must say that I’m suitably impressed.

For those who, like me, never played the original or know little about it, DotT is Dave Grossman and Tim Schafer’s loose sequel to Ron Gilbert’s seminal Maniac Mansion, the 1987 point-and-click adventure that spawned the genre (which you can actually play in its entirety from a computer terminal within DotT). Set five years after the first game, mad scientist Dr. Fred Edison has once again been up to no good. The toxic sludge he’s been pumping into the river behind the mansion has transformed his bizarre creation, Purple Tentacle, into an evil genius intent on taking over the world – mwahahahahahaha! 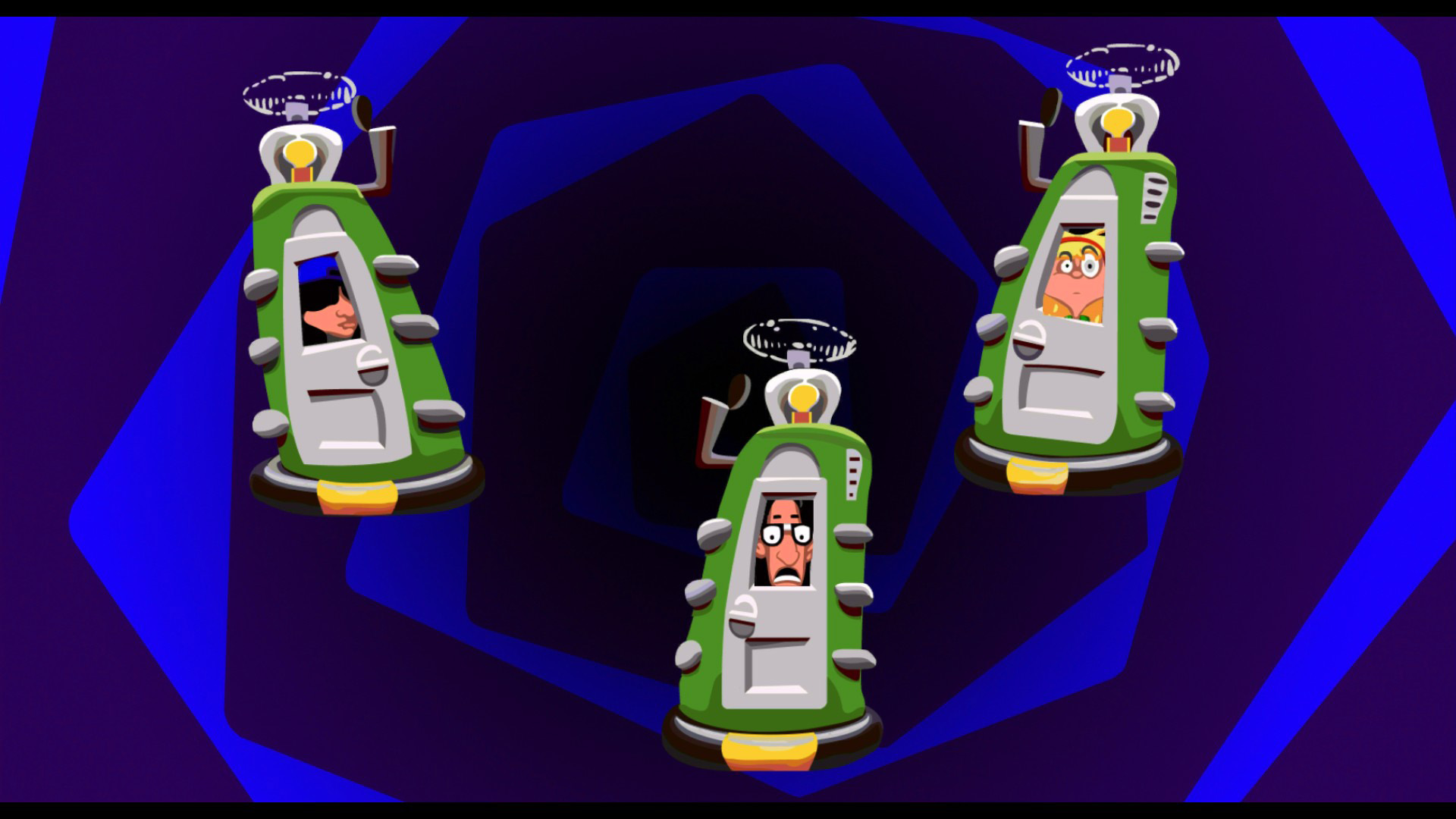 Naturally, the only solution is for Dr. Fred to send three misfit college kids back in time to the previous day to shut off the problem-causing Sludge-O-Matic. But alas, the giant imitation diamond powering Fred’s time machine isn’t up to the task so it all goes a bit wrong. Hippy-dippy medical student Laverne gets stuck in a distant future ruled over by Purple Tentacle and his minions. Metaller-dude Hoagie lands 200 years in the past, where the Founding Fathers just happen to be composing the US Constitution in the Edison family mansion. While super-nerd Bernard ends up right back in the present. So now the kids have to fix their Chron-O-Johns (yes, the time machines are portable toilets!), reunite in the present, and get back to thwarting the malevolent cow-tipping Purple Tentacle.

Clearly, this is a game that revels in its own absurdity, but that’s a large part of what makes it so much fun to play. Whereas the first game drew heavily on horror and B-movie clichés, DotT is like being thrown head first into a Loony Tunes cartoon. It’s brimming with silly humour, cartoon violence, slapstick, mild innuendo, daft logic, and lovingly-crafted Chuck Jones-style visuals (there’s even a nice Pepé Le Pew trope shoehorned into one of the puzzles).

The gags have aged surprisingly well. Yes, they can be a little hit and miss at times, but I laughed more than I groaned and I found myself examining everything and testing out all the dialogue options in order not to miss a single one – though I suspect many of the in-jokes will be totally lost on players unacquainted with Maniac Mansion and other LucasArts titles. And for a game made in 1993, the voice acting is just superb – in particular, the portrayal of George Washington as a demented egotist is simply hilarious. 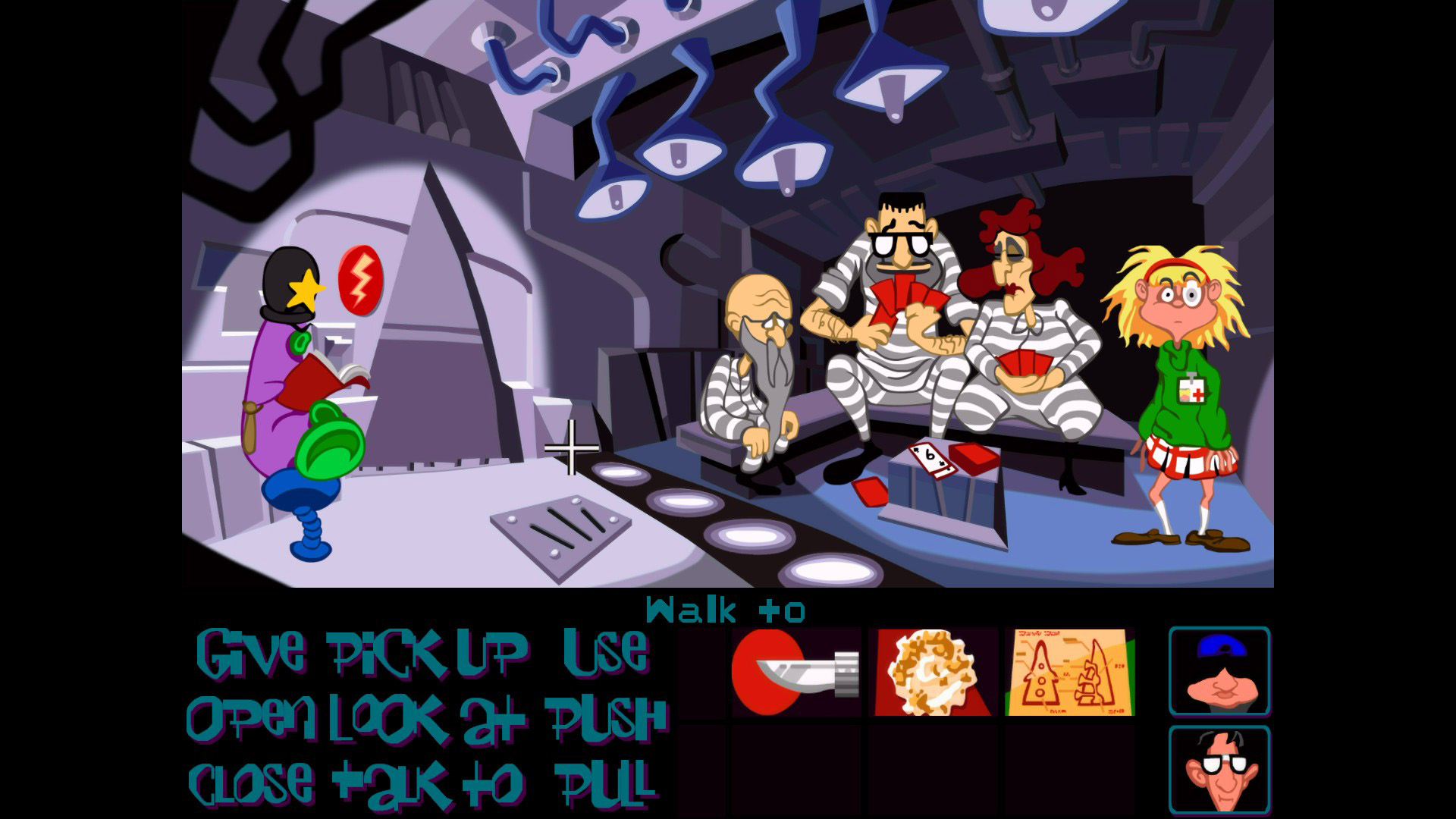 Design wise, DotT is nothing short of brilliant. Like other point-and-clicks, the gameplay largely revolves around solving a series of inventory puzzles. To arrive at the solutions, you need to thoroughly explore the locations, interact with various characters and acquire, combine and correctly utilise the necessary objects. Pretty standard stuff. But what sets DotT apart from its peers is the quality of its puzzles and how they cleverly interlink across three playable characters in three separate time zones.

Small inventory items can be flushed down the Chron-O-Johns, sending them hurtling through time and allowing the kids to share them instantly (well if you drag and drop on the inventory panel). Whereas other objects can be placed in specific locations to be collected in the future. And as you’d expect, messing with the past precipitates change in the future. It all makes for some pretty bonkers time paradoxes. For instance, one puzzle scenario sees you sending a design back through time to Hoagie and then passing it on to Betsy Ross, which results in the American flag becoming a windsock. Another sees you cheekily amending the US Constitution so that every household in the future ends up with a vacuum cleaner in its basement.

And whereas many adventure games are let down by the all too random nature of their puzzles, leaving you constantly second-guessing the intent of the designer, nearly all the ones in DotT have an appreciable logic to them (albeit a slightly twisted, cartoonish one) that can be readily deduced from all manner of clues, hints, and callbacks that the game smartly drops your way. As such, one of the most satisfying things about DotT is the numerous eureka moments when suddenly you twig at what a particular clue is getting at. 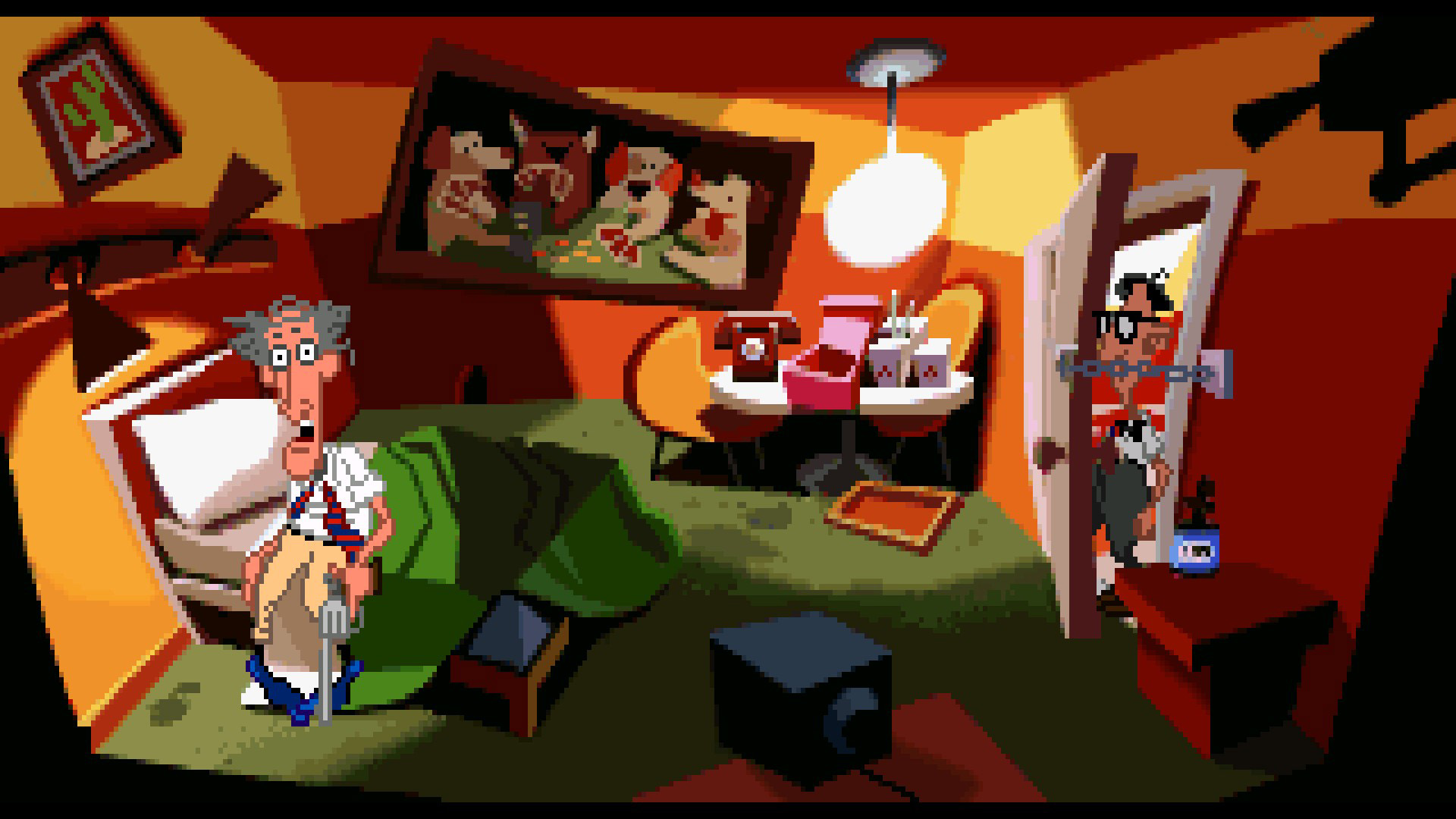 That said, it does require a certain familiarity with the LucasArts mindset, something newcomers to the genre might struggle with initially. And one or two puzzles did manage to frustrate. In particular, stealing the mouse toy from the cat. I knew roughly what I needed to do, but I couldn’t find the exact execution that the game demanded. After an hour or two of pondering and trying every single permutation that came to mind, I caved in and consulted a walkthrough. However, it was the only occasion I needed to do so.

In terms of the Double Fine Productions’ Day Of The Tentacle Remastered, it’s not bad but it didn’t exactly blow me away. The upscaled and slightly retouched graphics are a little bland and lacking in charm, and the low frame animations don’t look so good at higher resolutions. Whereas the updated music is a little over produced for my tastes. I also wasn’t too fussed about the optional developer’s commentary. It is vaguely interesting, but it’s simply far too obtrusive – it talks over the action, you can’t turn off the massive subtitles, and it’s not possible to pause or fast forward. Though I suppose it’s probably more suited to a second play through.

However, the concept art, which you unlock as you play, is a nice touch and I did appreciate the introduction of the contextual verb wheel. And unlike the awful The Secret of Monkey Island remaster, which managed to shit all over the beautiful artwork of a classic game, Double Fine have remained largely faithful to the original style. 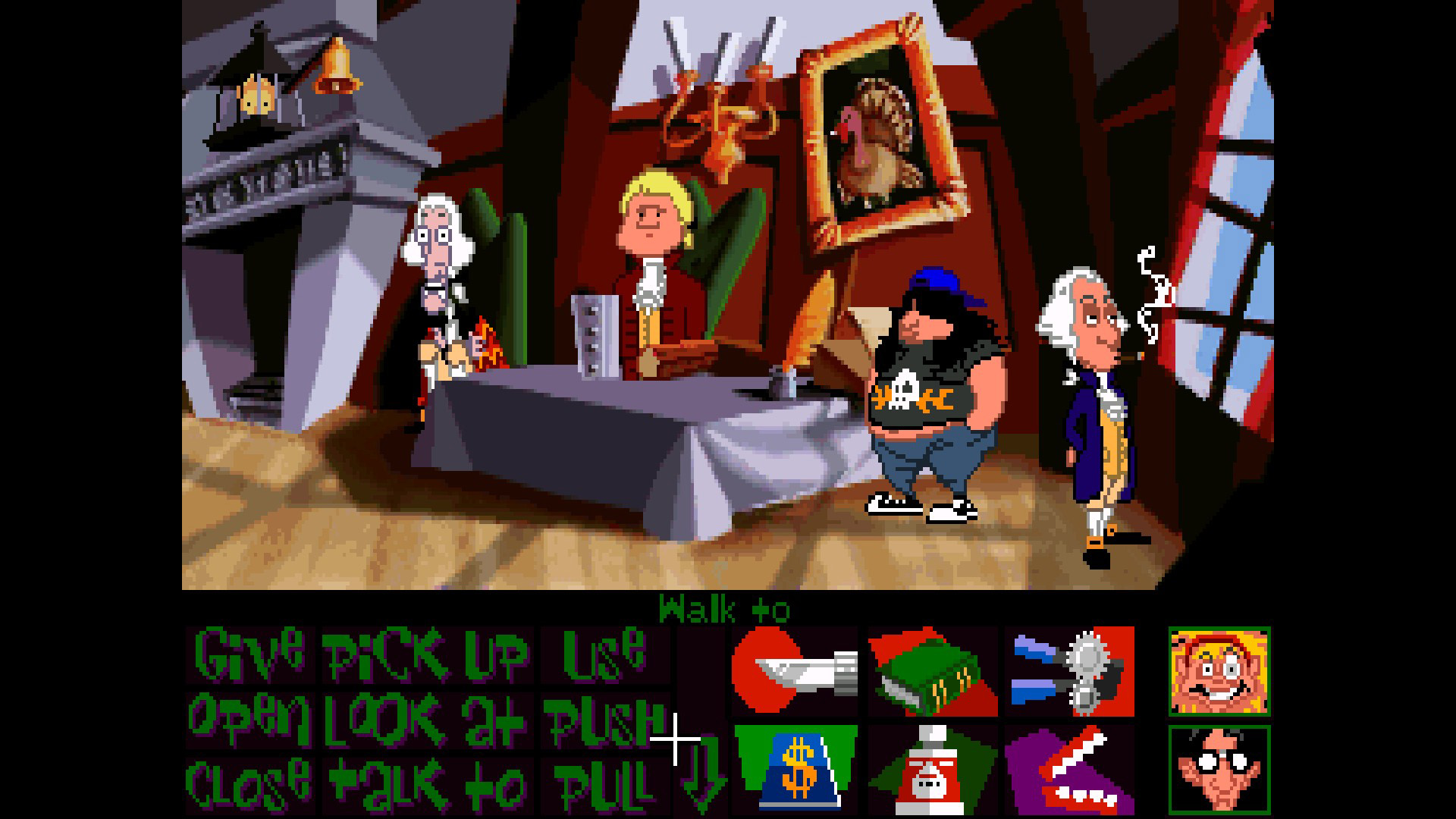 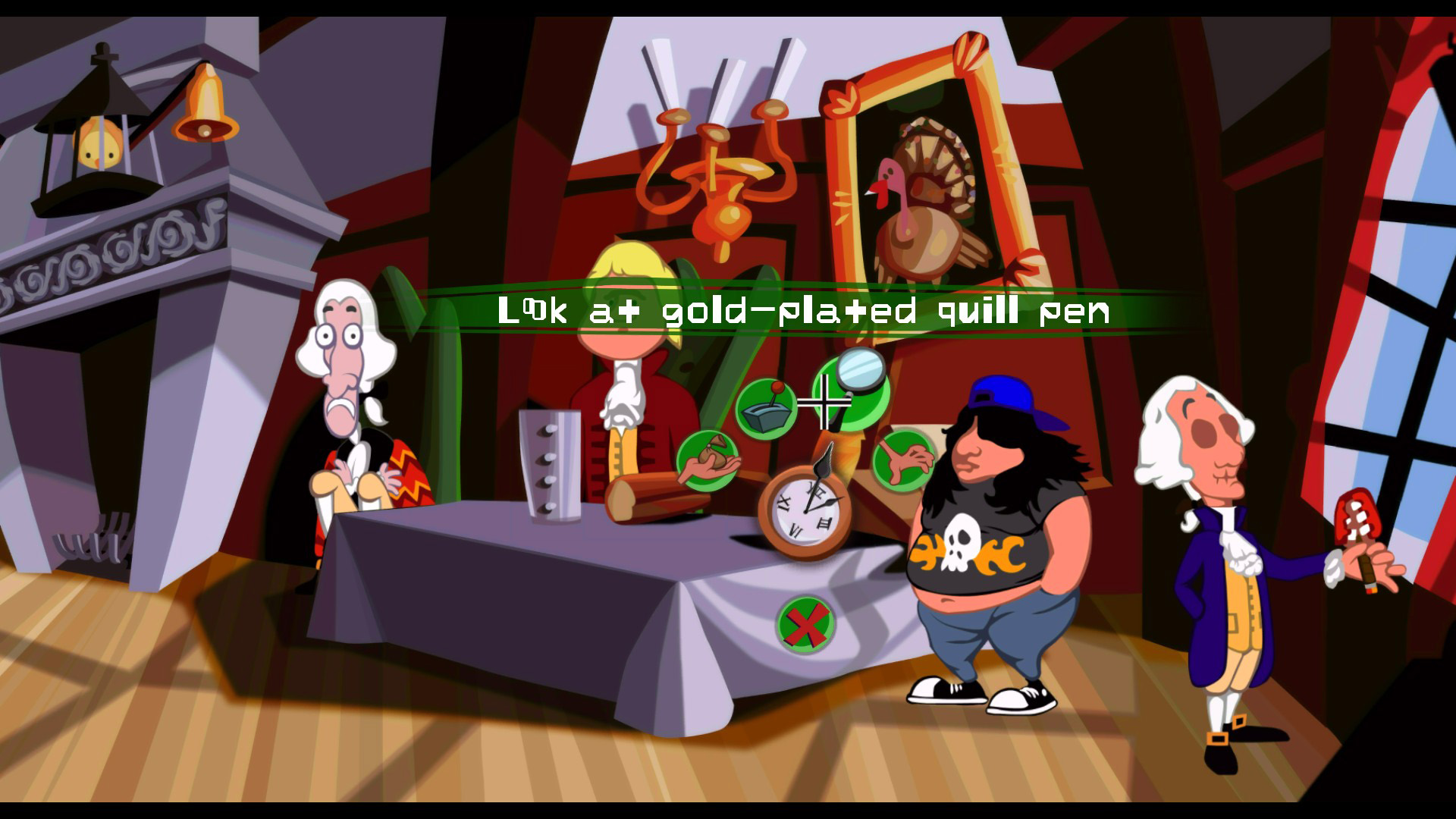 In its vanilla form, DotT is a point-and-click masterpiece that still holds up really well today. It’s intelligent, funny, endearingly eccentric, and highly entertaining. The art style is fantastic, the music and voice acting are brilliant, and it features some of the smartest and most satisfying puzzles of the genre. And I say all this as someone who didn’t play it the first time round. Admittedly, I wasn’t overly impressed with the updated music and visuals, but then again I don’t have a problem with playing old pixelated games. However, the beauty of the remastered version is that you can mix and match classic and remastered elements on the fly to suit your own tastes. And hopefully this edition will introduce a classic game to a whole new generation.

Day of the Tentacle’s biggest selling point, other than the nostalgia, is its humour. Much like Monkey Island before it there are a lot of situations that are likely to make you laugh as you play through the game, but there are just as many that are liable to make you tear your hair out.

Like a lot of 90s adventure games the logic for some of the puzzles is insane, especially a little later into the game when things start to get more complicated. While these puzzles never reach a point where you are likely to want to stop playing, you will probably reach for the universal hint system before the game is done.

The remaster has done a good job of bringing the visuals and music into the modern era. The game looks like a playable cartoon, with very sharp lines and bright colours throughout. The music has managed to keep the basic essence of the original themes, while bringing the actual quality of the music up a little which is very nice, especially considering the usual quality of music from that era.

Control wise there are a few updates.  You can now just click a button to switch between characters which is nice, and you can also scroll through your inventory with R1 and L1 to make it easier than shifting through all your items every five minutes. Instead of having all of your possible actions (look at, talk to, etc) displayed beneath the playing area you just tap square and it brings up a radial menu which really streamlines the entire game, and also lets the art work take up the full screen which is a nice change.

Having said all that don’t panic if you’re a purist who just wants to be able to play the original game on their modern consoles. The game comes with the ability to switch between render modes, changing the graphics and music back to the original style. Doing this also changes the gameplay, bringing back the list of actions at the bottom of the screen, and the need to scroll through your inventory manually to access items for different puzzles.

Overall as someone who never managed to finish the game in its original form it was nice to be able to play a much streamlined version on my TV, the new graphics and sounds work well and the controls are very easy to use. The addition of old school music and visuals for fans of the game is also a nice touch that helps this game feel like a remastering and a reboot at the same time.