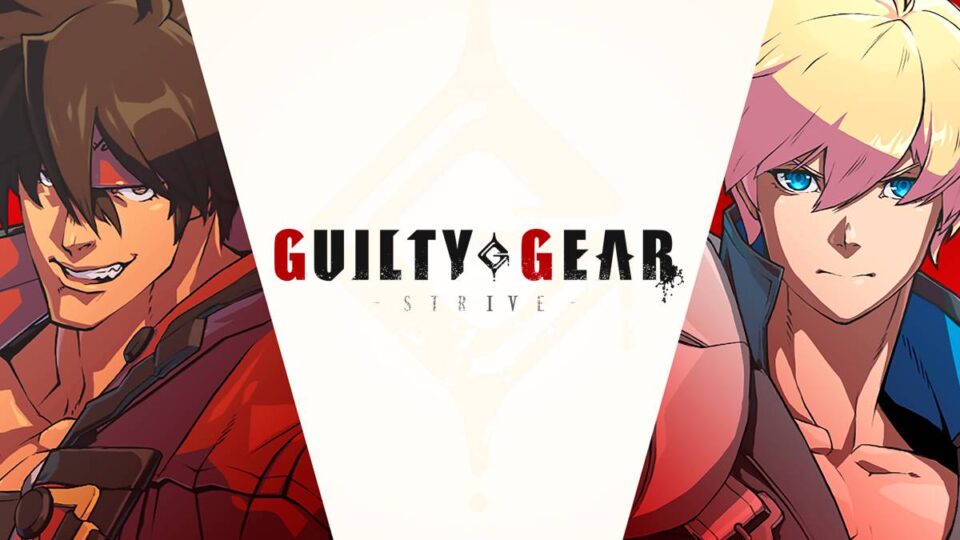 From leaps and bounds seems to be where legendary anime fighting guru’s Arc System Works are going. With every release they tend to just bring out better games with better mechanics, animations, style and substance, and it is no different with their ongoing series Guilty Gear. Now, it’s been around a while with the first game debuting on the PlayStation One and then hitting every console generation since however, I never hear my fighting game fan friends talking about it. It’s a notoriously complex series, but now with Guilty Gear – Strive –, Arc System Works have created not only one of the best anime fighting games around but one of the best of the genre.

Guilty Gear demands respect. To master the mechanics, you would have had to limber up them fingers and thumbs because performing the flashiest and more deadly manoeuvres would have taken some serious finger gymnastics. You’re more likely to end the first round with carpal tunnel. With Guilty Gear – Strive –, things have changed and for the better. It’s way more accessible now. Moves are simpler and easier to pull off, combos flow like running water, even as mechanical hulk Potemkin, you no longer need spaghetti fingers to whip out a devastating super move, bringing a sweet end to the little combo string. 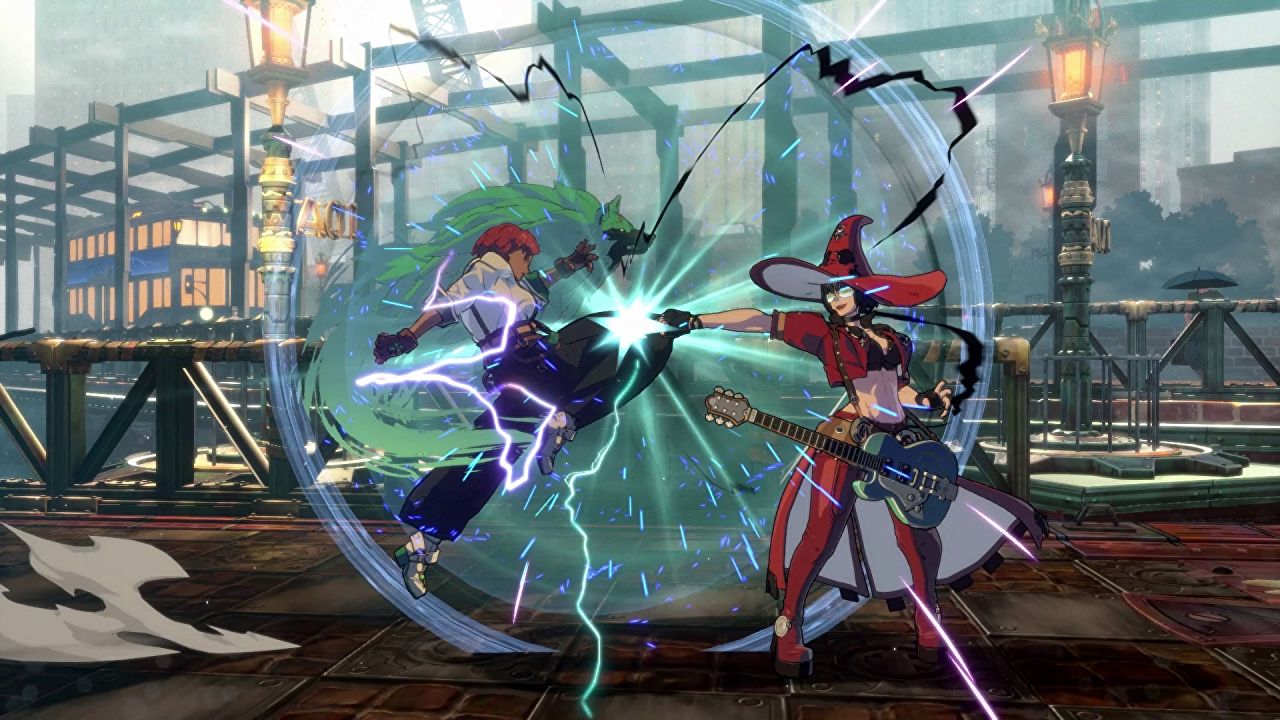 Unlike other fighting games, Guilty Gear -Strive -’s Story Mode involves nothing but story. Although I suggest learning the lore and the backgrounds of each character first, it won’t take you long to get a gist of what’s going on in Strive. Games like Mortal Kombat 11 and Street Fighter V mash their stories together in a series of cutscenes moulded together with playable fights. Guilty Gear doesn’t, you literally just sit back and watch. Think of it as an anime binge watch. It’s not a bad thing. We have a complex plot brought to life with stellar animations, heart pounding action scenes and excellent voice acting, although I would have liked an English dub, however. The story continues after the last game in the series, Guilty Gear Xrd REV 2. Badass merc, Sol Badguy, is after “That Man”, otherwise known as Asuka R. Kreutz, after he turned Sol into what is known as a Gear, a being artificially imbued with powers. It’s alright if you’re not familiar with Sol or “That Man” because the official Guilty Gear website has plenty of material to bring you up to speed. 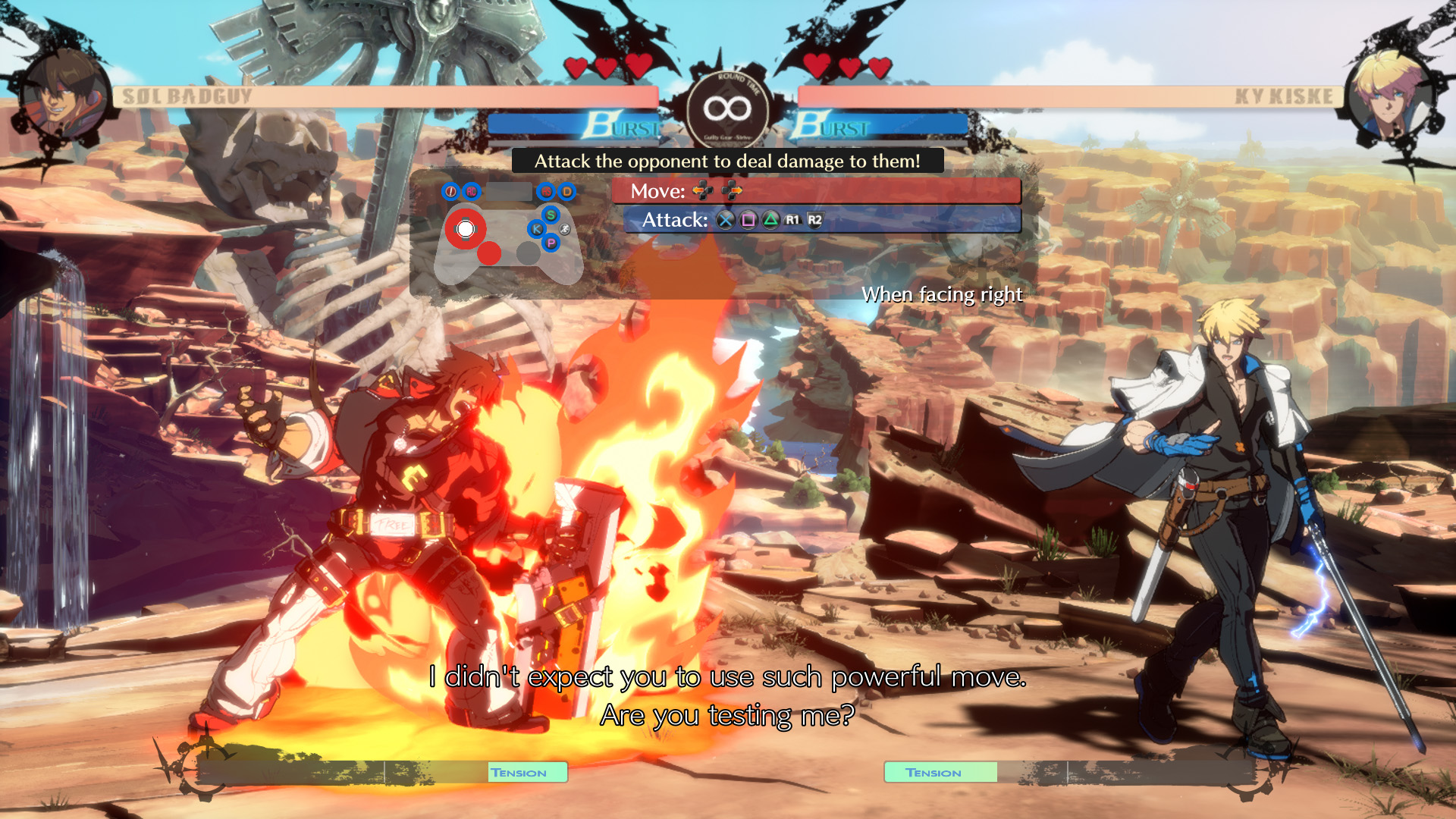 Strive has a smaller cast than previous titles, but they are incredibly diverse. Of course, Sol Badguy and his huge mechanical sword complete with fire powers makes him an easy main for newcomers with his mixture of long and short range attacks and massive area of effect special attacks. My personal favourite, Chipp Zanuff, makes a return with his elbow blade and incredible speed. Chaining combos with him is a blast thanks to his quickness and ability to jump in and out of danger in a flash. Aforementioned hulkster, Potemkin, is slow but powerful and has a move that uses his whole body as an unblockable weapon…nah, I’m kidding, he just falls forward. Strive has a couple of newbies too. Vampire samurai Nagoriyuki has huge screen presence and is able to activate a bloodlust mode when dealing out enough damage, which turns his katana red and allows him to unleash new, more devastating moves, and Giovanna, with her spirit companion wolf, is able to rush in with a quick beatdown. Even the crazy doctor, Faust, makes a return with his creepy persona and weird but effective move set.

The animation during the actual fighting is absolutely mind-blowing. It shows how far Arc System Works have come to create something as excellent as this during gameplay. Firstly, every fight starts off with the two combatants entering the arena before exchanging a phrase, but then the camera zooms out in a single, smooth motion, allowing the fight to commence without a single break in shot. It is a sight to behold, and even though I had watched them a fair few times before, I found myself letting them play out before each match purely because of how brilliantly animated they are. The same goes for the end of the match. The camera zooms into your character without breaking shot as they knock out their winning animation, it is outstanding. During matches, the action is constantly fast and frantic, and the screen is almost always filled with effects. Knock out a combo, and you’ll see how many hits you got in with a huge number appearing behind your character; counter a move, and the word “COUNTER” appears behind the characters across the entire screen with a temporary pause in the action, which really makes countering a move a huge event. Then there is the new wall break mechanic. Pummelling your opponent against the edge of the stage allows you to gradually crack the edge of the screen, and finishing a combo will cause it to shatter, activating a special stage transition animation that inflicts extra damage. This is on every stage too. And then there are the super moves, absolute jaw-dropping assaults on the senses for sure, and it’s all backed up with some awesome hard rock and metal tunes that give every fight that extra crunch. 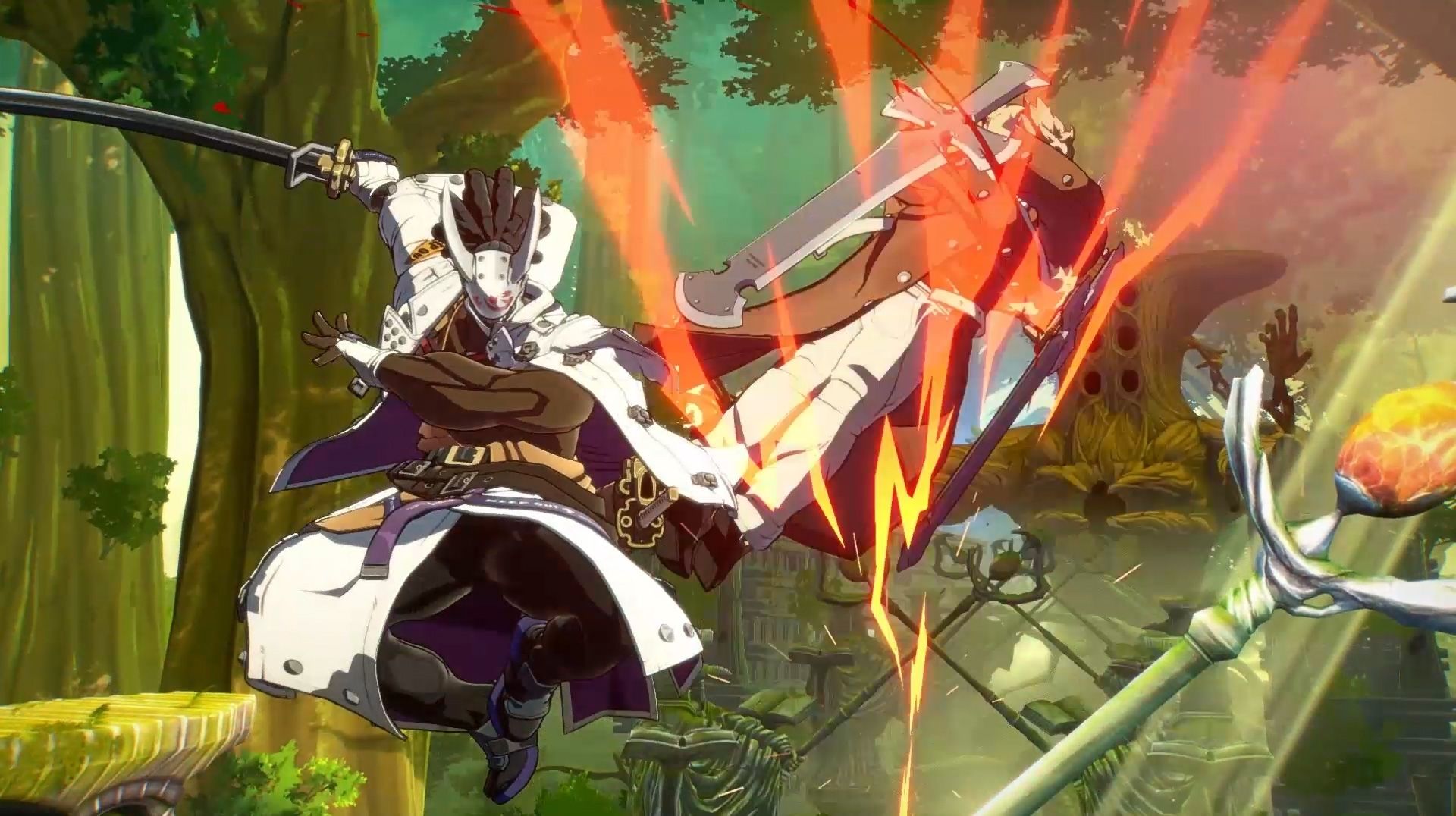 There is enough content to keep you playing here. Strive’s Arcade Mode features special interactions between characters, depending on which character you play as, which keeps each playthrough interesting without it just being one fight after another. My playthrough with Chipp gave me a shock when I lost a round and May came in to assist me in a 2-on-1 battle. The Arcade Mode also chooses the difficulty automatically for you depending on your performance. There’s also a Survival Mode and a tutorial to get you to grips with the fundamentals and also a Mission Mode to show what you’ve learned.

Online is impressive. The rolled back net code meant minimal lag and latency issues during the tensest of fights. I had hardly any problems playing online; it wasn’t perfect by any means as not everyone has great internet, but I felt the game kept the action flowing as best it could, and I’ve had some great bouts so far. Getting into fights is the most interesting part, however. You create a pixelated avatar who then roams around a hotel looking for other potential opponents. People after a fight stand on one of the many pedestals with swords drawn, and it’s up to you whether or not you want to approach them to duel. Loot boxes are here in the form of a fishing spot, but don’t worry as they just unlock art, music and the likes. 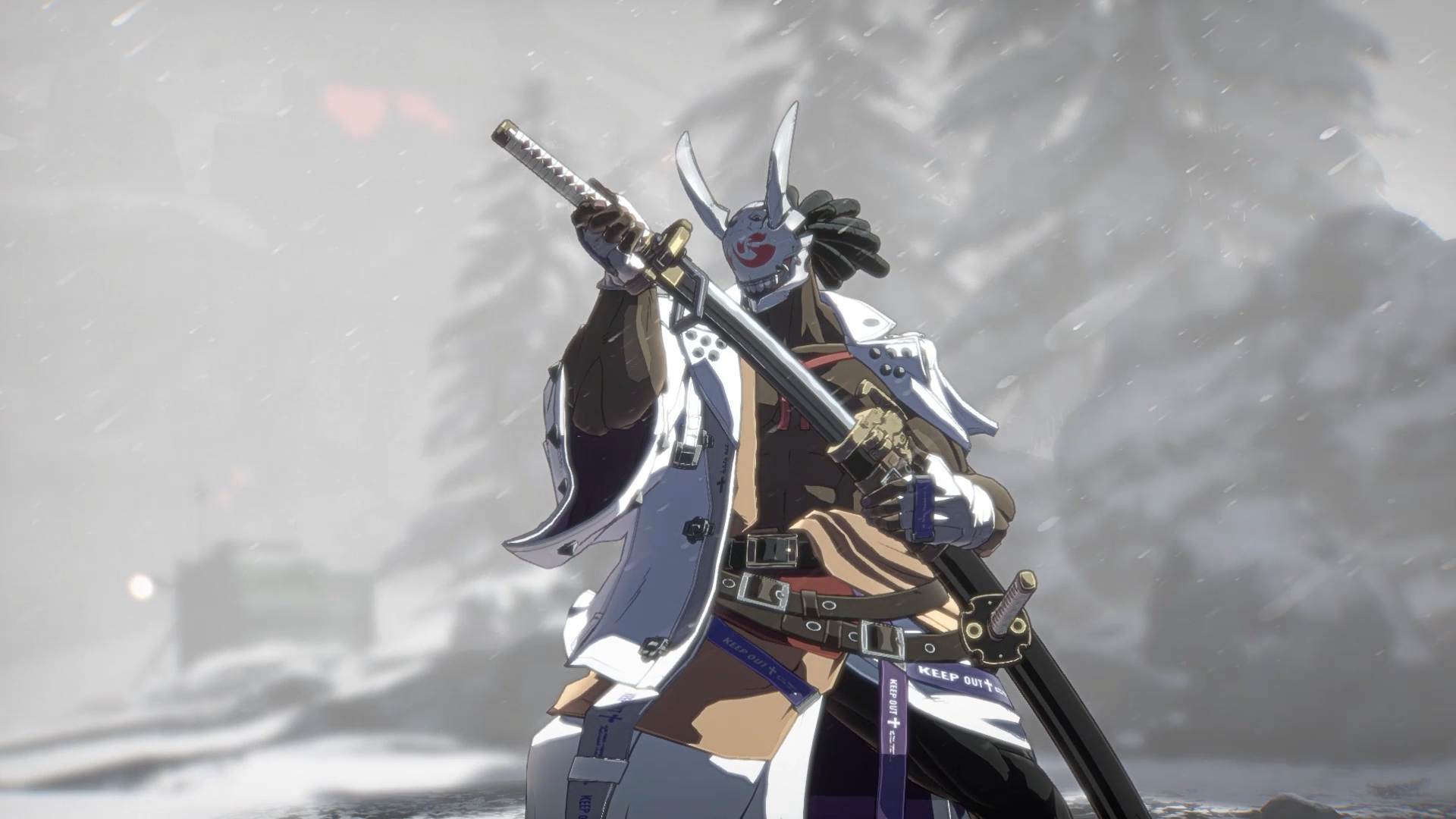 I can’t stop playing Guilty Gear – Strive –. The simpler mechanics, animation that needs to be seen to be believed, the soundtrack, a smooth net code and the diverse cast are but a few reasons why Guilty Gear -Strive – is one of the best, if not the best, anime fighting games in existence. 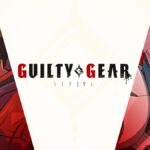 Gaming Respawn’s copy of Guilty Gear – Strive – was provided by the publisher. 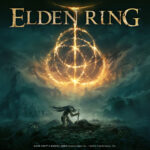