Capcom has a lot to answer for. Their ever popular Street Fighter series has been the subject of many arguments between myself and my peers. From Street Fighter 2 on the SNES all the way to last generation’s Street Fighter 4, the now refined 2-dimensional fighting mechanics have come a long way and have since become the centre piece of many gatherings with my friends. We have come far since our favorite wandering warrior, Ryu, delivered that fateful Dragon Punch to the towering, eye patch wearing Sagat. Sure, there has been iteration after iteration of previous Street Fighter games released to whet our brawling appetites. “Super” and “Ultra” releases improved on things and gave us a bigger, more balanced roster, but Street Fighter fans get more excited when a brand new Street Fighter game is on the way.

Street Fighter V, one of the most anticipated fighting games of recent years, is finally upon us. It’s familiar 2D fighting gameplay is once again easy to learn but hard to master. Ryu and Ken’s “Hadouken’s” and “Shoryuken’s” are a welcome return, however they fight differently now than they have in the past, bringing with them a refreshing sense of uniqueness. This isn’t the only change Capcom have made. The biggest change is evident from the main menu, or lack thereof. Street Fighter V is bare bones with little emphasis on single player content. Although Capcom have promised that this would be rectified in March, the lack of an engaging story mode and a Classic Arcade mode is truly missed. Instead, what we have is a seemingly rushed story mode which, while it tells each fighter’s reason to fight through a nicely drawn slideshow separated by 3 or 4 fights, it can easily be completed in half an hour. Chun-Li continues to look for her father’s killer, Ryu still wants to be the best warrior in the world, and Ken still thrives to beat his long time rival; each story is intriguing but over far too quickly. 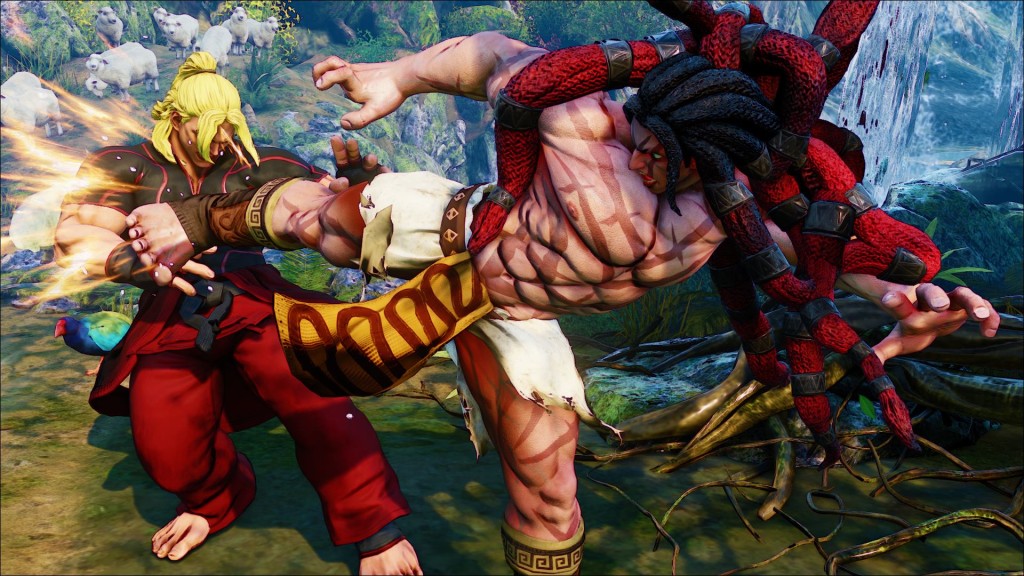 The focus of the entire game seems to be online and offline multiplayer with Versus mode for offline play and 2 online modes for over-the-airwaves showdowns. These consist of Casual Match and Ranked Match, each of which will pit you against a fellow Street Fighter combatant fairly quickly depending on the status of Capcom’s servers. They have impressed me so far as I have never waited for longer than a minute. You can also actively search for players as you play. Casual is just a straight up fight without consequences for losing, however Ranked matches earn you LP or League Points which determines your fighting level.

The familiar Street Fighter fundamentals are more refined this time around. There are 16 available characters each with their own strengths and weaknesses. Veterans Ryu, Ken, Zangief, Chun-Li, and M.Bison join returning Dhalsim, Karin, Birdie, and Rainbow Mika, and newcomers Rashid, Laura, F.A.N.G., and Necali. It’s an excellently balanced motley crew mixing quick but weak with the slow but strong. It takes time and practice learning your favorite character, especially if you intend to compete online as the rock, paper, scissors style of gameplay is a necessity to master.

EX moves have been replaced by the V-Gauge which can be used in a variety of different ways unique to each character. Once filled, by pressing the strong punch and strong kick buttons simultaneously, you can activate your chosen character’s V-Trigger. Ryu enters a mode which makes his punches and special moves stronger, the clawed Spaniard Vega has a quick claw attack, and Birdie has numerous amusing ones such as eating and dropping a banana skin or slowly rolling a soda can across the screen. These V-Trigger abilities can turn the tide of the fight in a heartbeat along with V-Skills and V-Reversals. These use sections of the gauge to unleash powered up versions of a special move or parry and counter your opponents moves. I learned to love the V-Gauge. It saved my skin more often than not and added an interesting tactical element to all of Street Fighter V’s epic sized battles. 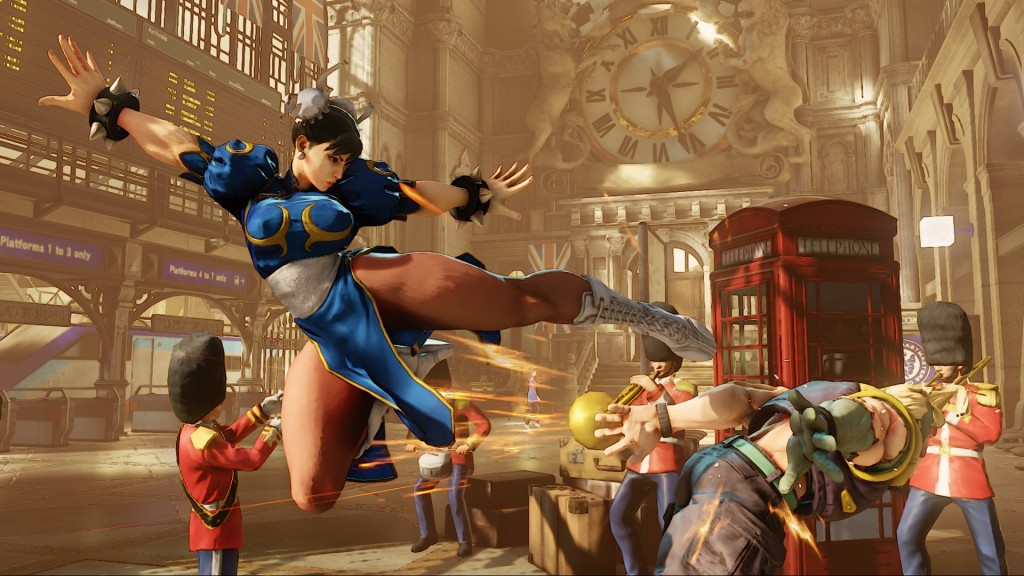 Super moves have now be changed to Critical Arts. These are untouched as a whole, but man do they look slick. Each character now only has one instead of having the choice of a few in past games. Still requiring the familiar combination of 2 quarter circles and a punch or kick button, Critical Arts seriously pack a punch and can be an ideally explosive end to a tough battle. Thankfully, the Critical Gauge doesn’t empty between rounds, so you will always have the opportunity to perform it during a match, although they are easy to block but connect and there’s a good third of your opponent’s health gone in one single move.

Street Fighter V is the best looking fighter around with every fighter brimming with little touches that add a smidgen of realism to them, such as scrapes of padding coming off of Ryu’s gloves or the way Karin’s plaited hair flows. Dhalsim and Bison are noticeably older this time around, with the Indian shaman sporting a huge grey beard and a glimpse of grey hair visible under Bison’s hat. Capcom have sexualized the females in Street Fighter V with their *ahem* assets emphasised, this may impress the male audience, but it takes the toughness away from the female fighters. Laura is a Brazilian badass, but the fact her bosoms are in your face takes her fierceness away visually. As a whole though, the entire game looks beautiful.