Just like the corrupted space core from Portal 2, I’m a sucker for anything that’s even remotely connected to space. So much so that when a love interest of mine told me we needed some space, I was positively thrilled! Just have a look at my Steam Library, it’s filled with the latest and greatest titles from that place no one can hear you scream from: Kerbal Space Program, Space Engineers, FTL, and even the ‘less space, but still in space’ games like Dead Space and Lifeless Planet. Now, what happens when you hand over ‘space’ to the developers from Paradox Interactive, known for evil game series such as Crusader Kings, Hearts of Iron, and Europe Universalis? You get Stellaris, the grand strategy game set in space that laughs at medieval plots, spits in the face of coalitions, and mocks world wars, because in this title you get to rule nothing less than the galaxy. 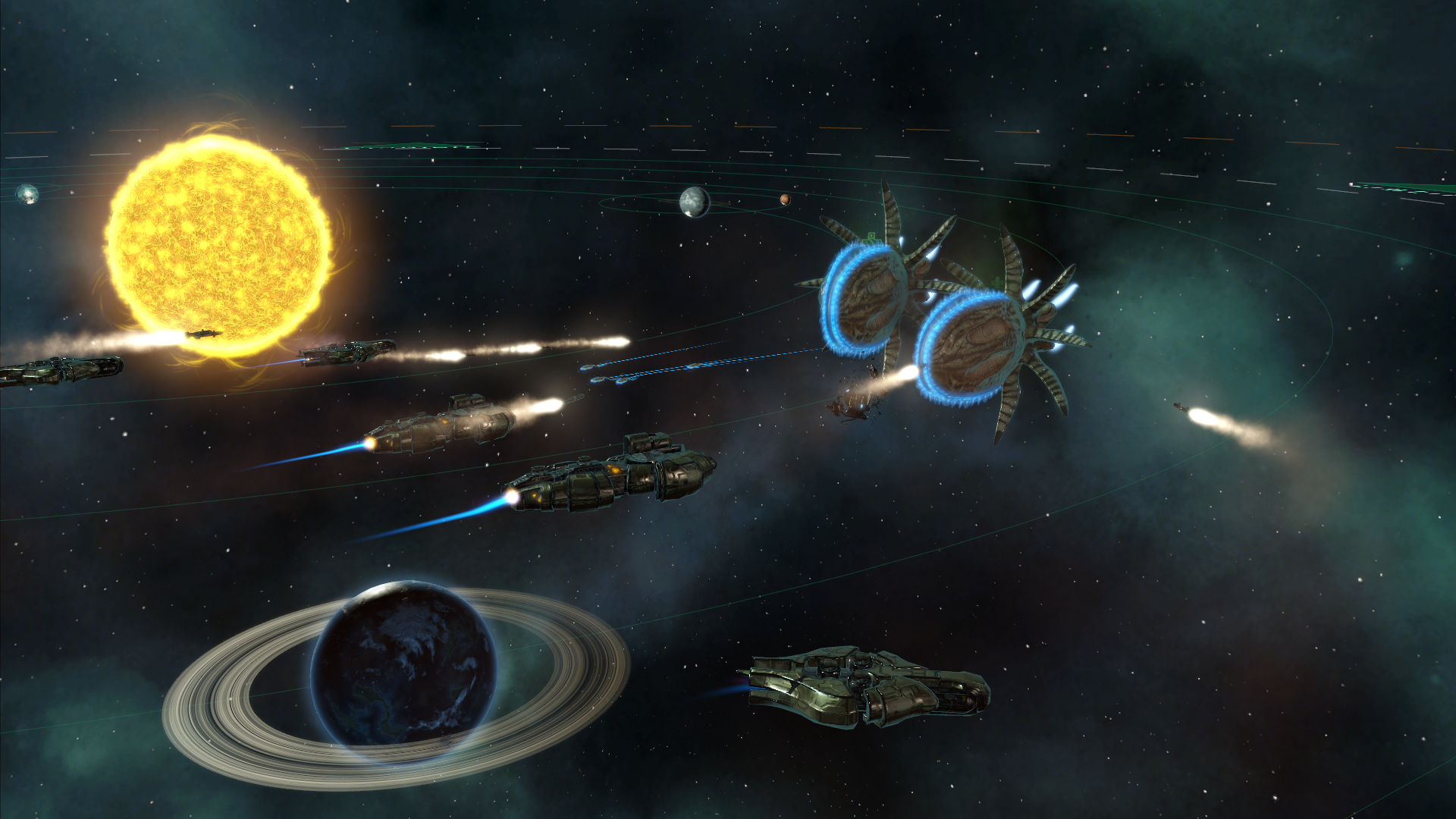 Talking about Stellaris is as hard as it is playing the game, because unless you’re playing with other people in a multiplayer match, no two games will be the same. You’ll get to experience new species, new solar systems, and even completely new galaxies every time you open up a new game on this very impressive piece of software. Are you jealous of the computer’s ability to regenerate scenarios for you? Why not one-up them by creating your very own species, ranging from nomadic mushrooms to a trading arachnid species all the way to evil and warmongering kitties? The game starts you off gentle, your species just started grasping the basics of space travel and through easy and informative hints, the game guides you in building your empire whichever way you’d like it. All of this sounds like a fun experience, but it can really turn into the Event Horizon of video games, where the unknown horrors of space reign terror on you and your people. I’m counting my lucky stars (eheheh) that my peaceful kitty empire hasn’t had to endure the endgame disasters such as your robot servants rising up against you or even being sent back to the stone age where you’re left to chase laser pointers from more advanced species.

By now it’s no secret that I really like Stellaris, it’s the grand strategy space game I always wanted, it’s easy enough where you can jump straight into but hard enough that even after 50 hours you’re still finding new challenges and problems to solve. It’s the game I wanted Beyond Earth to be. What the game does really well is guide you from sending your first ship to Jupiter, encountering actual UFOs for the first time all the way up to colonizing several solar systems. You feel like the actual ruler of your empire, trying to guide your people through these ever changing times. You’ll be faced with dilemmas such as ‘should I research sentient AI so I can have ‘robobuddies’ and risk having them rise up against me?’, or ‘should I spend more of my precious research on better, sweeter vegetables?’. A lot of the game won’t be available to you right from the get go, everything will slowly be explained to you so you know how to do most things step by step. You’ll start off with basic resources and later be exposed to new technologies and resources, something that is paced surprisingly well. Never did I feel like I couldn’t keep up with the game. 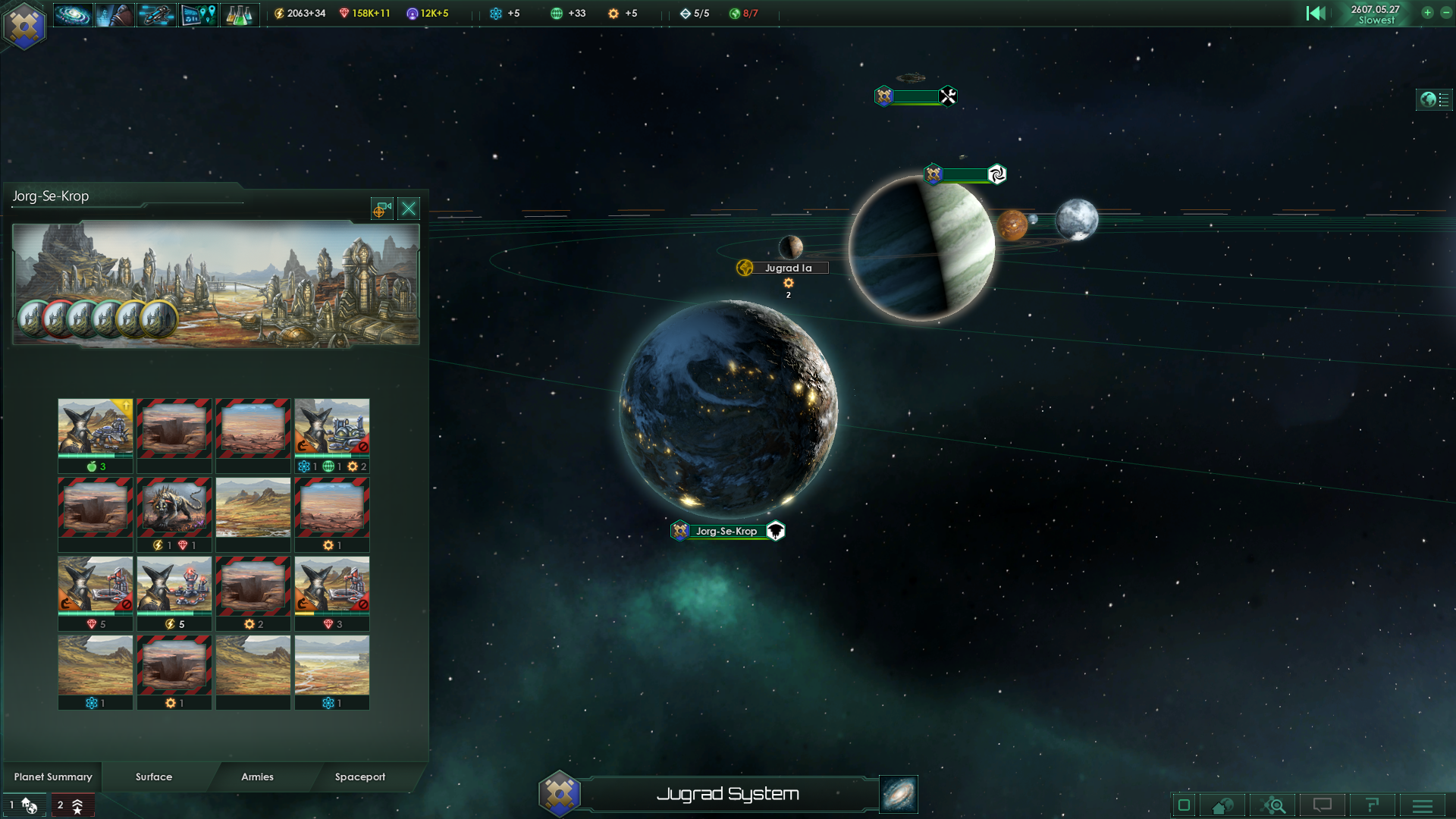 Now, despite me being a bonafide Paradox fan, I can still see where this title still has its rough edges. As I’ve mentioned before, the game does a great job of teaching you how to play as you go, sadly it seems to lose interest in teaching you new things in the later stages of the game, and after a while you’re back in familiar Paradox territory. There are features out there somewhere in space, but you have no clue how to work with and sometimes even find them. I had this issue with sectors, a vital part of the game that hands over some of your empire’s control to the AI so you can focus on more urgent matters such as ‘what will I do with all these new slaves from this empire I just conquered?’. That feature was hidden away at the top of the government menu, something the friendly tutorial robot had failed to mention before.

Paradox games, whilst being incredibly time consuming and fun, are also known for being foundations which are going to be built upon. You can expect a wide range of downloadable content to be made available and, possibly, turn this game into a classic just like Crusader Kings 2 and Europe Universalis 4. I’ve seen people call this a more accessible and entry level Paradox title, and while I agree with this, don’t for any second think that this game won’t suck you in for hundreds of hours even without the promised DLC. Whichever way you lean towards on the ‘DLC is evil- DLC is needed to support the developers’ scale, Stellaris is a rock solid game in its own right. It does the sci-fi feel of iconic series such as Star Trek extremely well, and it has features that make it one of the more interesting sci-fi titles out there. The species you start with isn’t the species you’ll end the game with. You’ll be able to change their traits, and leaving some of your population isolated in a far corner of the galaxy might leave them open to changes of their own.

The overall package that Stellaris brings is impressive, it’s new, shiny, easy to use, and above all it understands the sci-fi from popular culture really well. And while the game might not cater do the ‘hardest of hardcore’ sci-fi fans and grand strategy enthusiasts, this piece of software is sure to deliver one of the most memorable experiences once Paradox have fully fleshed out what the future of this title is going to be. One thing is for sure though, if you ever wanted to rule the galaxy without being overwhelmed by stats, sliders, and trade routes right from the getgo, this is the game that’s going to seduce you with its easy to learn, hard to master philosophy and hundreds of hours worth of gameplay that’s hidden behind the the box.