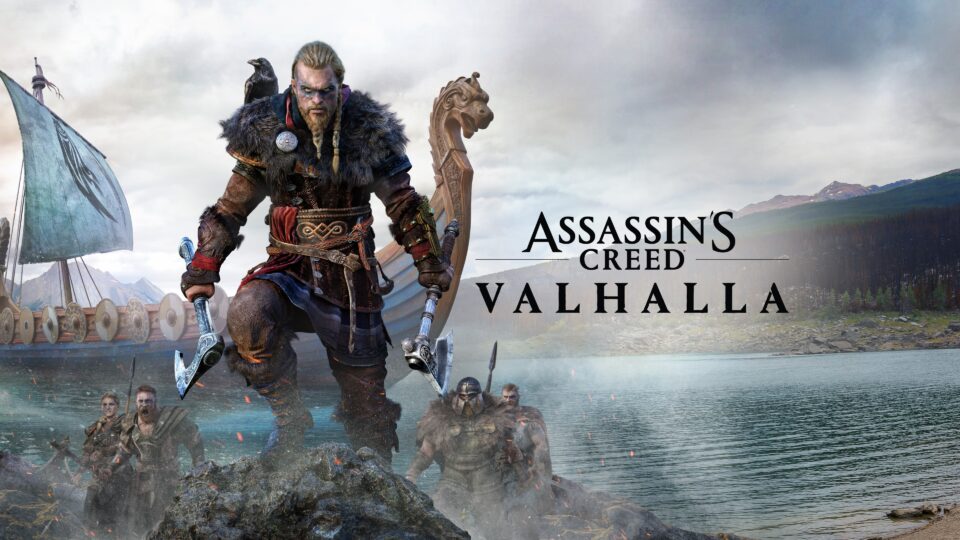 There’s a sense of déjà vu beginning this new console generation in the same way I did the last. Seven years ago, it was Edward Kenway and his swashbuckling pirate crew sailing the high seas. Now, it’s Eivor and his/her Viking crew sailing the high seas in search of a new home. Whilst the initial premise is not all that different, the series has evolved a lot since then. In its twelfth entry, Assassin’s Creed: Valhalla takes players to the era of the Vikings in 873 A.D. 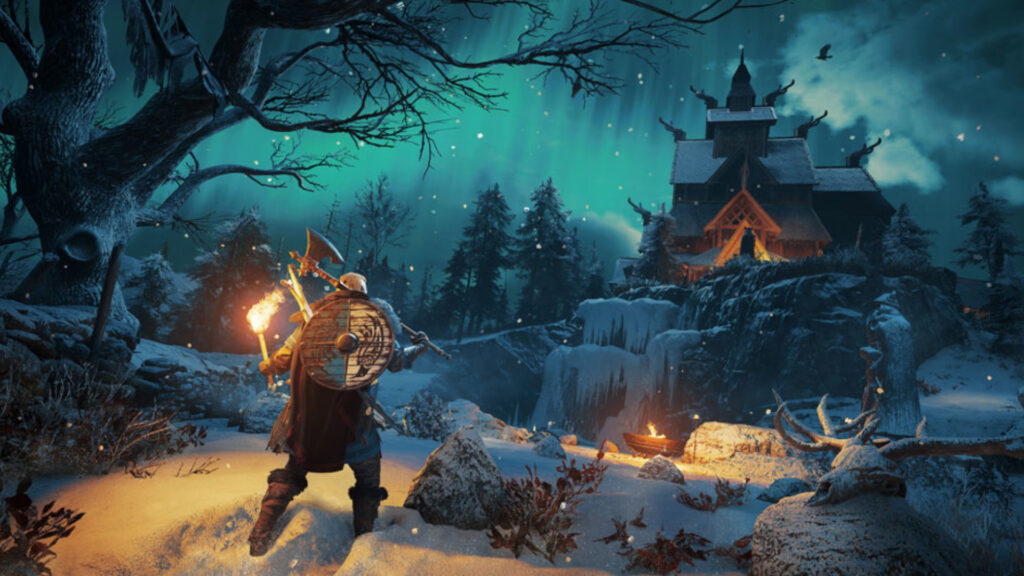 The game opens in the snowy, mountainous country of Norway. Here we get Eivor’s prologue that will set up his/her backstory before embarking to greener pastures in England. Staying on the beaten path, the prologue probably wouldn’t last more than two hours, I’d estimate, though I’m not able to say for sure as I found myself giving into the lure to explore the optional mysteries and activities of the land. It’s completely optional, but doing so will enrich you in this country and its culture.

Anyone who’s so much as watched a trailer for Assassin’s Creed: Valhalla will know the premise is to leave this country and raid England to make a new home. But I would encourage people to do as I did: play a game of flyting in a nearby settlement, find some hidden artefacts, uncover mysteries of the land. Immerse yourself in the country before leaving it. You can always return at any time, but for me, it was important to get a sense of Eivor’s homeland to understand his/her decision to leave it behind.

When you do choose to leave it, as you inevitably must, the sprawling Anglo-Saxon England opens up to you. For the most part, Valhalla picks up where the previous two entries, Assassin’s Creed: Origins and Assassin’s Creed: Odyssey, left off. For now, gone are the days where Assassin’s Creed games were contained to one big city. Origins adopted a more The Witcher 3: Wild Hunt-style approach with an open-world RPG. In fact, there’s even a cheeky reference to Geralt’s adventure within a side-quest in Valhalla called “The Mild Hunt”. 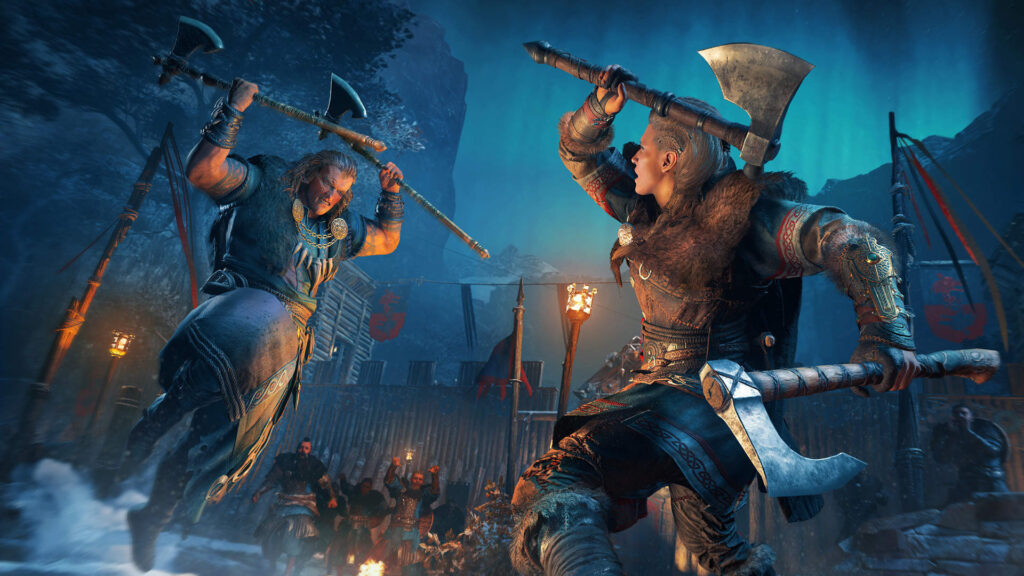 Now, this new approach has caused some division amongst long-term fans. After all, changing any long-running franchise so drastically will inevitably displease the purists. Though others argue when you start getting into the double digits on entries in a series, it’s about time the formula is changed. Personally, I completely understood the change, even as a long-time fan. The series needed to evolve. But that doesn’t mean there weren’t any kinks to work out.

The world in the two previous entries, Origins and Odyssey, sometimes felt big for the sake of being big. There were, of course, optional side missions along the way, there was just something about the world that didn’t feel alive. On top of that, it didn’t help that Odyssey forced players to grind XP in order to progress the story. All in all, whilst the latest two entries have entertained me for a while, I never really held an affinity for them the way I did the older games.

Well, Valhalla does away with these two issues, and frankly, I haven’t been able to put it down. Valhalla seems to cut through that open-world padding and delivers a more straightforward narrative path. But the surrounding areas feel alive enough to entice you into exploring the world, even with it being optional. For me, it’s the best blend we’ve seen yet between balancing the new open-world style with the nostalgia of the past entries.

Once you leave for England, you can naturally expect to be taking part in raiding other settlements there. After all, this was part and parcel of the Viking life. Raiding is not only a fun activity thanks to how well detailed every aspect of a raid is executed but also due to the fact that it’s all but necessary to upgrade your own settlement. Raiding and pillaging gives the player resources that can then in turn be used to upgrade your home settlement. Another gameplay layer that comes into play here is where you decide to upgrade first, whether that be your stables, your docks, or other features. 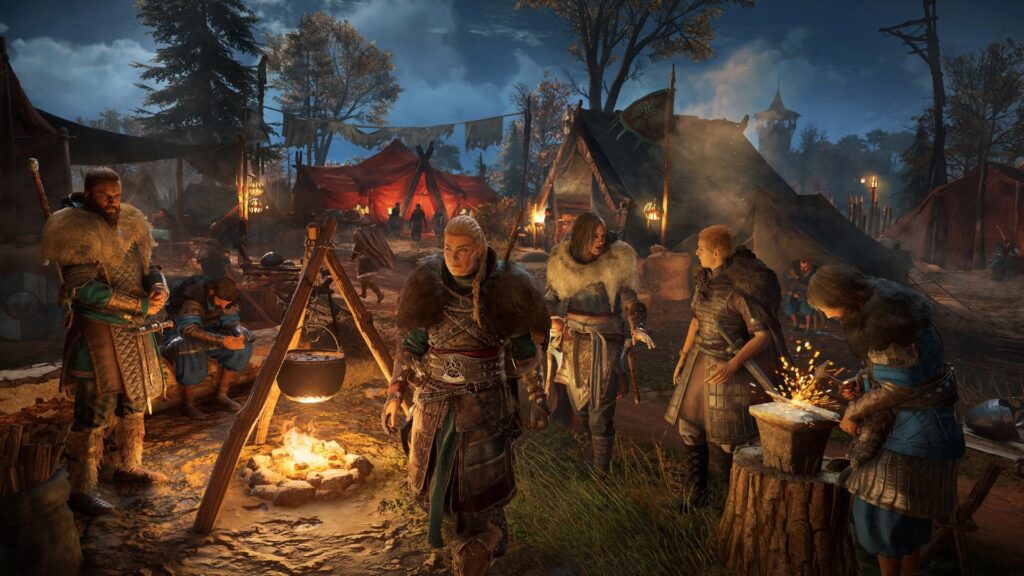 I don’t want to delve too much into the story to prevent any spoilers, but what I can say is that the writing is top notch and better than any other Assassin’s Creed game I can remember over the last few years. Every region you come across has its own trouble and turmoil, but eventually these all come together in an overarching story that makes it ever more satisfying. In your travels across the various regions of England, you’ll be forging new alliances or making new enemies as you go. Alliances are crucial to boosting the standing of your clan, the Raven Clan.

It’s not all big stakes stuff though, there are plenty of charming and quirky side activities to spend time in. The amalgamation of an interesting world, Norse mythology, and discovering the myths and legends of Olde England make for a richer experience than the last two open-world RPG-style Assassin’s Creed games managed. I found myself taking prolonged breaks between times I played Odyssey, but I haven’t experienced that with Valhalla, it’s an expertly crafted world that I continue to want to explore.

Of course, an Assassin’s Creed game lives and dies by its gameplay. The combat in Valhalla is mostly similar to Odyssey, but we now have a stamina bar. The stamina bar is the backbone of the combat gameplay in Valhalla. Blocking, dodging, and missing attacks all consume stamina. Therefore, skill and accuracy are rewarded in this new system. The combat is brutal, rewarding, and every bit the Viking dream. The only downside I can think of is the dodge rolling is too quick and covers too far a distance, making it feel very unrealistic.

Thankfully, Valhalla takes a return to series’ roots with more emphasis on stealth and assassination gameplay too. It feels like a blend of old and new, which will strike a nice chord with both sides, the fans who yearn for nostalgia and the ones who yearn for something fresh. Though, you are a Viking, so if you want to go in brutishly, by all means, you can. 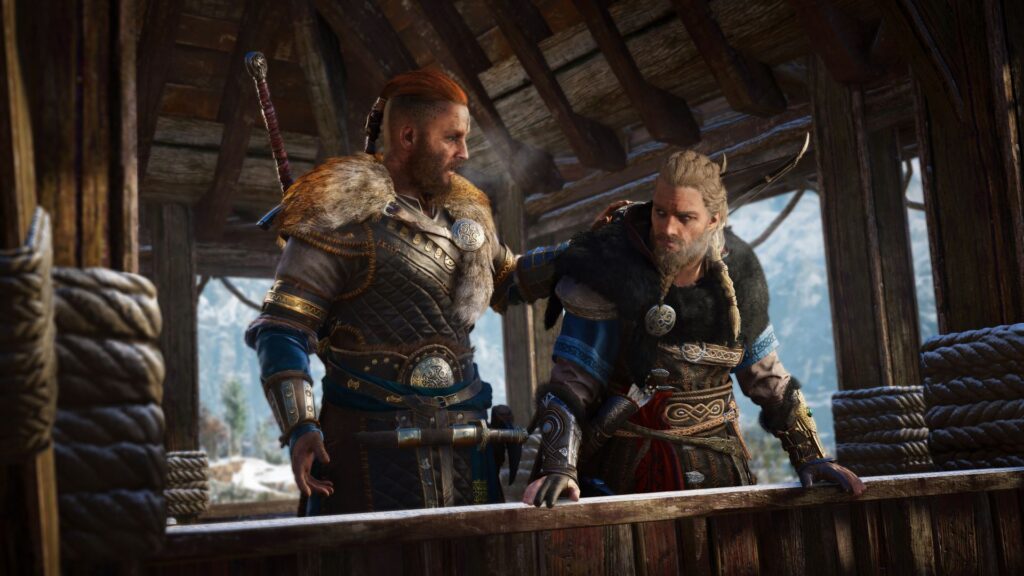 Like Odyssey before it, Valhalla also gives players the choice between playing as a male or female, though the choice is far simpler this time as you’ll play as a male or female version of the same character, Eivor. Dialogue can be different, however, depending on which one you play as, especially the more crude dialogue. You can change gender whenever you want, so you’re never locked into your initial choice.

There’s also a third option: let the Animus decide. This is pretty much a best of both worlds option. The Animus will represent the stronger female or male memory-stream, depending on its current strength. In this choice, you’ll primarily play as female Eivor. She’s a great character with an amazing character model, but I couldn’t always get on with her voice acting, it sometimes felt forced in a way to sound almost manly, and something about it just felt a little off at times.

Graphically, Valhalla is the most impressive entry to date. Even on a base PS4, the game is simply beautiful. Though it’s the next gen consoles where you’ll get the truly optimal version. On Xbox Series X and PS5, Valhalla runs up to 4K resolution and 60FPS, as well as featuring a range of graphical enhancements. Moreover, the benefit of SSD technology means Valhalla will load much faster on next-gen machines too. Rest assured, if you’re still on old-gen machines, the game is very well optimised and looks great. 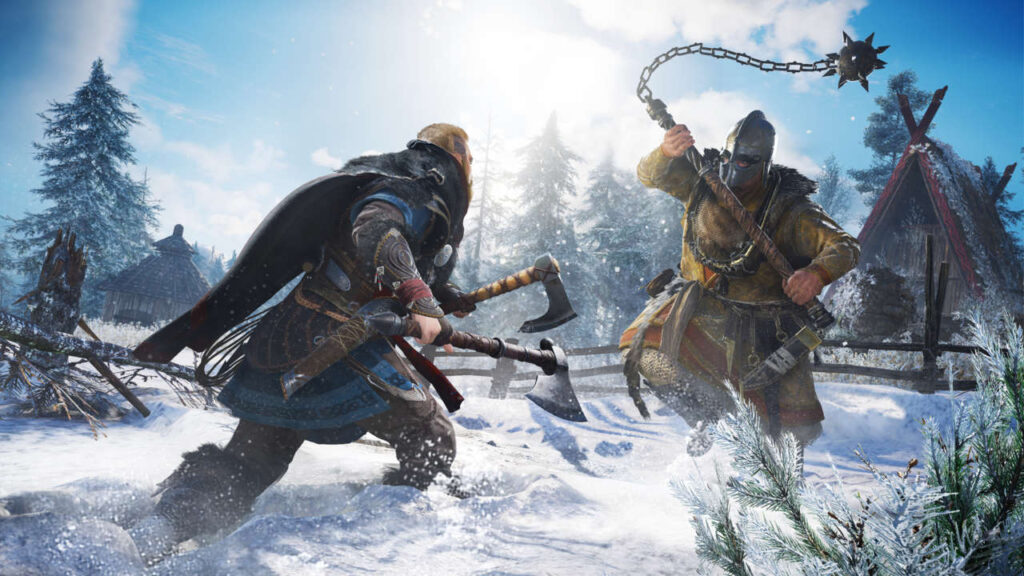 All in all, Valhalla is the best game yet in the new open-world RPG style-Assassin’s Creed games. The world is lively, lush and entices one to explore beyond the narrative path. Though if you wish to just focus on the narrative path, you can do that. Unlike Odyssey, there’s no grinding XP before being able to embark on the next mainline mission. That being said, let yourself explore the country, the culture, the quirky characters, the drinking games or witty exchanges; your experience in Valhalla will be greatly enriched by doing so.

I started this review speaking of my sense of déjà vu with Valhalla, and that’s truer now than before I embarked on my Viking adventure. That’s because this is also my favourite Assassin’s Creed game since I played Assassin’s Creed IV: Black Flag at the start of the last generation. For Assassin’s Creed fans old or new, Valhalla strikes a near-perfect balance appeasing the wants of both. 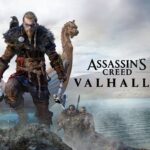 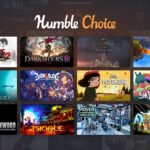 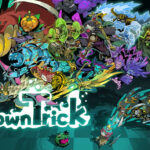