Assassin’s Creed has grown up. From an ambitious stealth series to a full-fledged role-playing game, this hugely popular series has overcome its shortcomings and criticisms and has come to this, Assassin’s Creed: Odyssey, the latest entry to the much beloved franchise. After the success of last year’s entry, Assassin’s Creed: Origins, developers and publishers Ubisoft have taken its framework, polished it up further to an immaculate sheen, and given us a bigger game than that before it. There’s no sugar coating here, Assassin’s Creed: Odyssey may well be the best RPG we’ve seen since The Witcher 3: Wild Hunt. 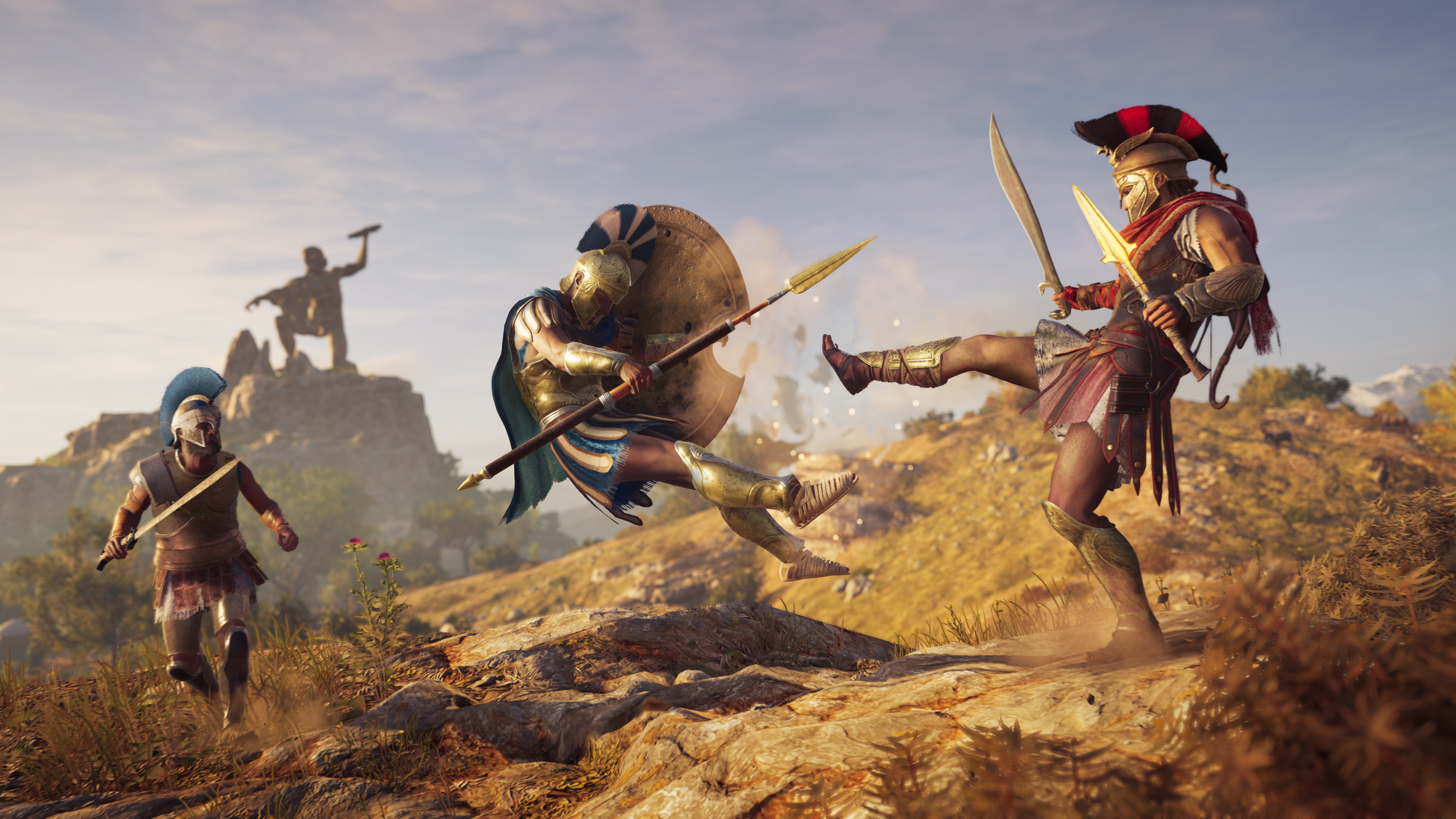 Players of Odyssey will feel like they have been plucked from the pyramid laden landscape of Ancient Egypt and dropped smack bang in the middle of the Aegean Sea. You play as either Alexios or Kassandra, descendants of the great King Leonidas, when your hunt for any trace of your family places you in the middle of an all-out war between Athens and Sparta. Whether you play as either protagonist, the story remains the same. Odyssey has some fine writing here, and what’s new to the series is branching conversations. You’re now able to choose how you respond to the many colourful characters Odyssey is littered with, with different outcomes that eventually lead to different endings to the story, again, an Assassin’s Creed first. Alexios and Kassandra may be the best protagonists since Assassin’s Creed 2’s Ezio Auditore in terms of personality, and this time it’s your choice as to how people may perceive them in the game world. 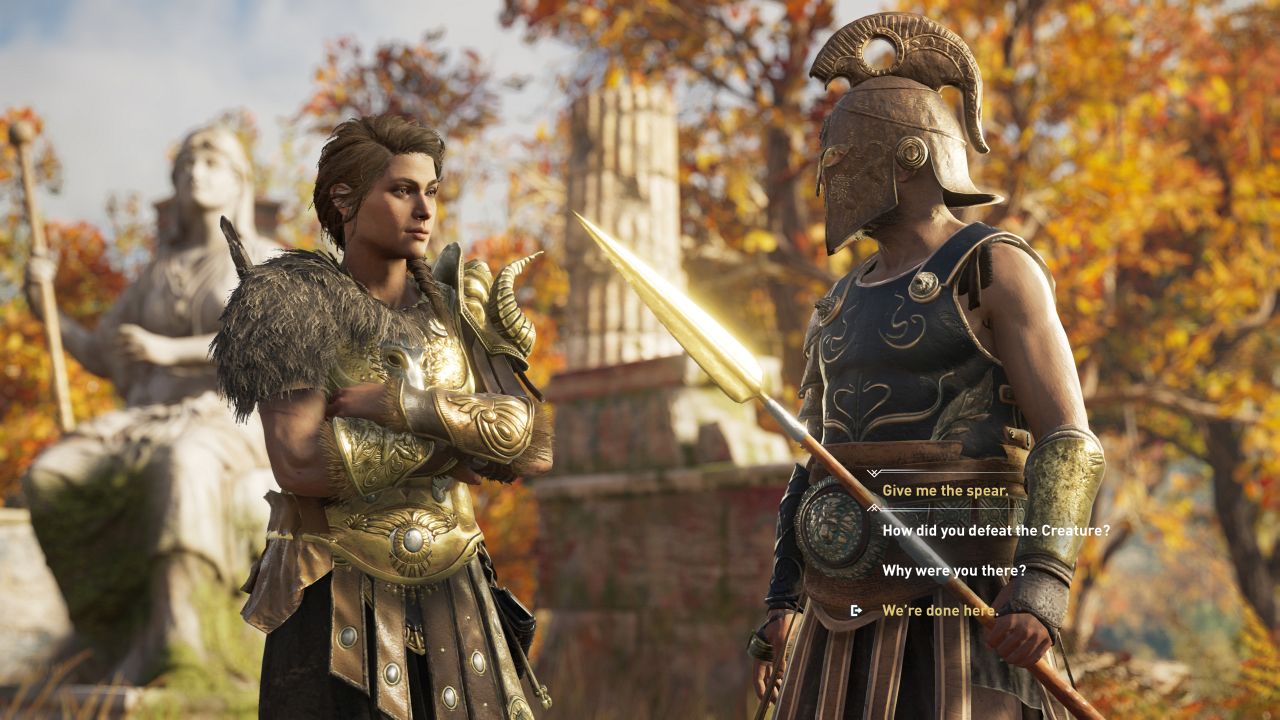 Odyssey takes everything from Origins and makes it bigger, better and easier. The awkward and frustrating traversal seen in older Assassin’s Creed games is now a spec on the horizon. Traversal here is finely tuned and a blissful experience. Ancient Greece is a rocky place that our heroes seem to be able to climb flawlessly. You never stop to think how they can climb cliff sides and 100-foot high statues so easily, you’re having too much fun to do that. Greece is massive, so there’s no room for the traversal system of old, and what’s more, you gain your trusty steed very early on too. Greece is littered with towns, villages, temples and monoliths to explore. This is the biggest Assassin’s Creed world yet, and Ubisoft have not left any stone unturned here; the place is a beautiful landscape with mysteries around every corner. I stopped by a small lake before realising there was an underwater temple for me to search for valuable loot, and once I’d gotten it and was on my way back to the surface, I was ambushed by 3 sharks. Quite the tense moment.

The Dark Souls-like combat from Origins remains intact here with a few tweaks to make it more interesting and so much more fun. Either protagonist has some fantastic fighting skills at their disposal, but now they can unlock special abilities to use whilst fighting. Skills such as the iconic Spartan Kick, made famous from the movie 300, can be unlocked and assigned to one of the face buttons, which in turn can be activated at any time by holding the shoulder button and pressing the appointed face button. These moves can be unleashed effortlessly and make for some truly special moments. The bigger guys, such as hulking bosses and the new type of Greek police force called Mercenaries, take some studying before you’ll be able to use these moves on them. You cannot just tap away for an easy victory, enemies have unblockable attacks they can unleash at will, which come with visual warnings. The only way to avoid getting hit is by rolling out of the way. The combat is fast and fluid as you look for openings to use your weapon of choice against your enemy. Fighting is tenser when 2 or more enemies are after your blood simultaneously. Target switching is easy and quick, allowing you to manage any crowds of goons, and it is key to surviving Odyssey’s new large-scale Conquest battles. 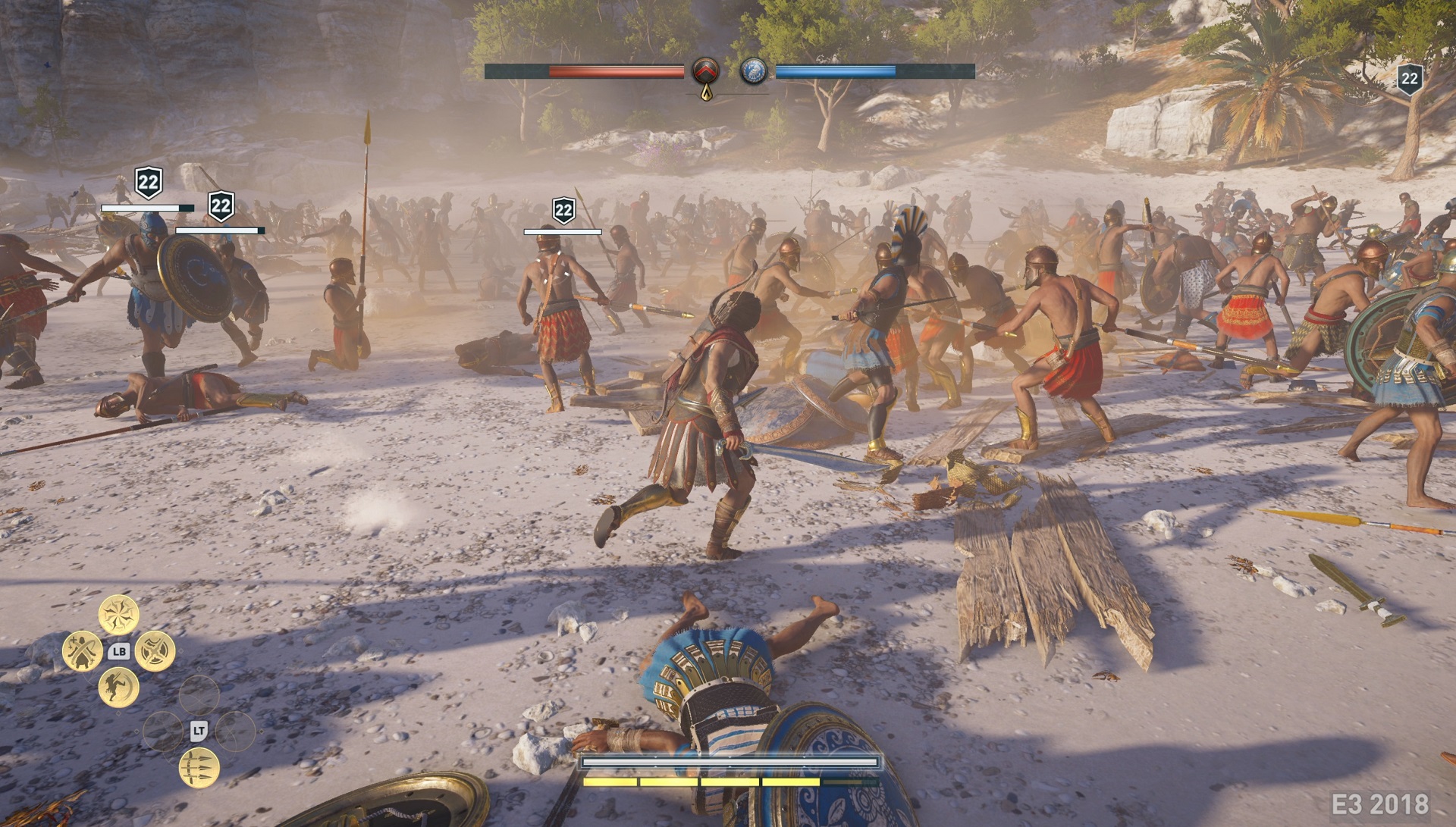 Whichever hero you choose, both have new skill trees with brand-new, as well as returning, skills to unlock. This time, the skills are separated into three categories, each of which has their own strength number. Upgrading skills in the Hunter tree makes your ranged combat strength more powerful, Assassin makes your stealth attacks more brutal and Warrior increases your proficiency in combat. Managing these is essential to success in any situation that arises in Odyssey. Stealth is a much more viable option here, this is an Assassin’s Creed game after all, and it is fantastic. Crouching in tall grass and waiting for your time to strike down unsuspecting guards is serious fun. You also have a companion to aid you, Ikaros, your pet eagle, who flies overhead and can be called upon to assess your surroundings, marking patrolling guards or highlighting loot chests, and he can swoop down to assist in combat too or help hunt animals. This feature returns from Origins again, but it feels so seamless here. The aforementioned unlockable skills can be used in stealth situations too, such as using King Leonidas’ spear to throw at enemies to make for a sort of ranged stealth attack. This felt a lot like the shadow stealth attack seen in Middle-earth: Shadow of War, and using it never got old.

Odyssey puts you in the middle of a war, so there are new things to consider when taking on missions and quests. Special types of missions such as burning war supplies can decrease the forces of either side when completing which, when decreased to a low level, means you can hit the Leader without much resistance. We’ve seen this type of mechanic before in games such as Ghost Recon: Wildlands, which requires you to gain Intel by doing missions before going after a boss. It increases Odyssey’s scale, making you feel like a cog in a massive machine. It also pads out the game without missions feeling like padding as you do feel like you are truly making a difference. This is helped by the game’s superb voice acting and mocap work. 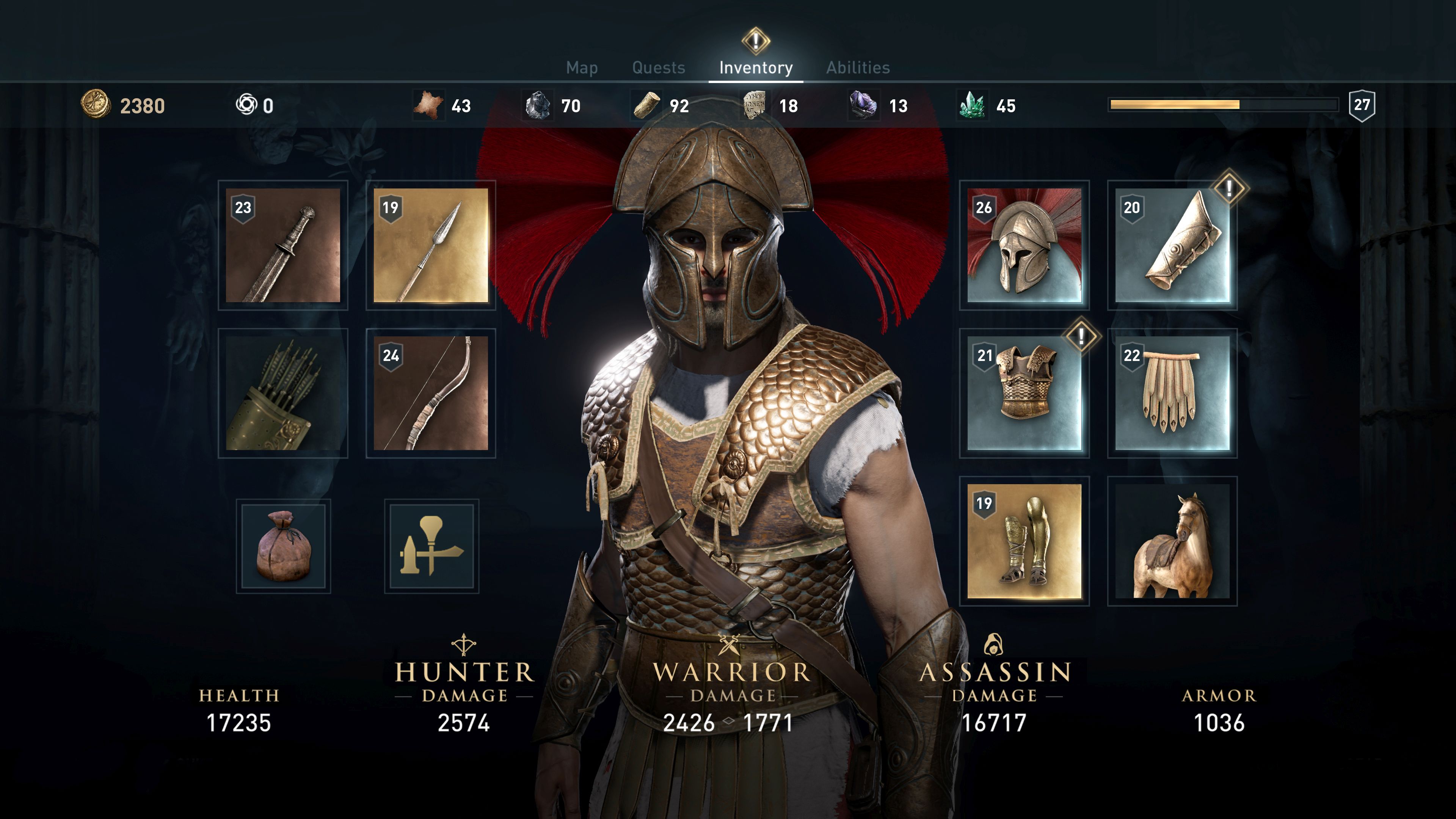 Fans of Black Flag can rejoice to know that sailing is back in full form. After the completion of Chapter 1, you’ll be in full control of your own ship and crew, and with it you can become an Ancient Greek pirate of the Aegean Sea. Naval combat is back, and boarding ships is here too, and it’s just as incredibly fun as you can remember. Now imagine Spartan kicking an Athenian goon into the waters below, making them shark food; good times. Your ship and crew can be managed too. Upgrading the ship’s hull, armaments, making your crew look better and recruiting lieutenants can all be managed with ease. 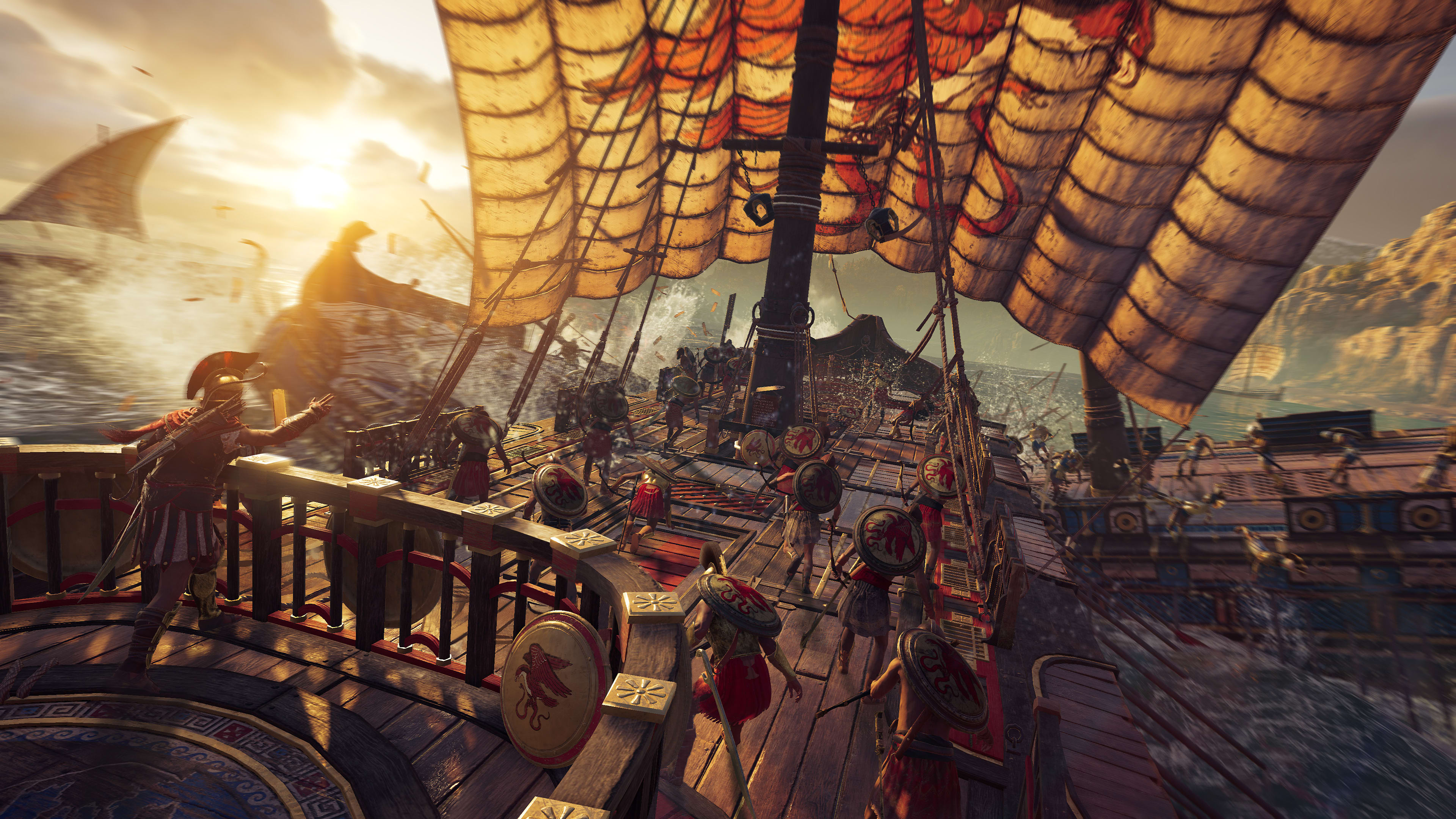 Odyssey’s visuals are truly stunning. From the sun-kissed rocky landscapes and forestry of Phokis to the blood-soaked beaches of Megaris, each location is beautifully crafted with breath-taking detail. This is also part of my one and only criticism with Assassin’s Creed: Odyssey. Although not as often as with Origins, there are graphical hiccups that are tough to ignore. Things like NPCs seemingly standing on air, horses that disappear into walls and weird glitching can occur at times, but although it’s worth mentioning, it doesn’t hinder the overall experience. It’s still a gorgeous game. 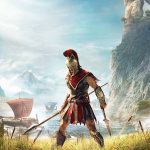 Assassin’s Creed: Odyssey is the biggest and best title the series has ever known. With the deep plot and abundance of equally deep side missions, it’s the best role-playing experience since we last took the reins as Geralt of Rivia, and that is no mean feat. 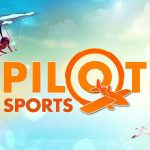 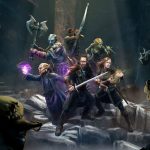