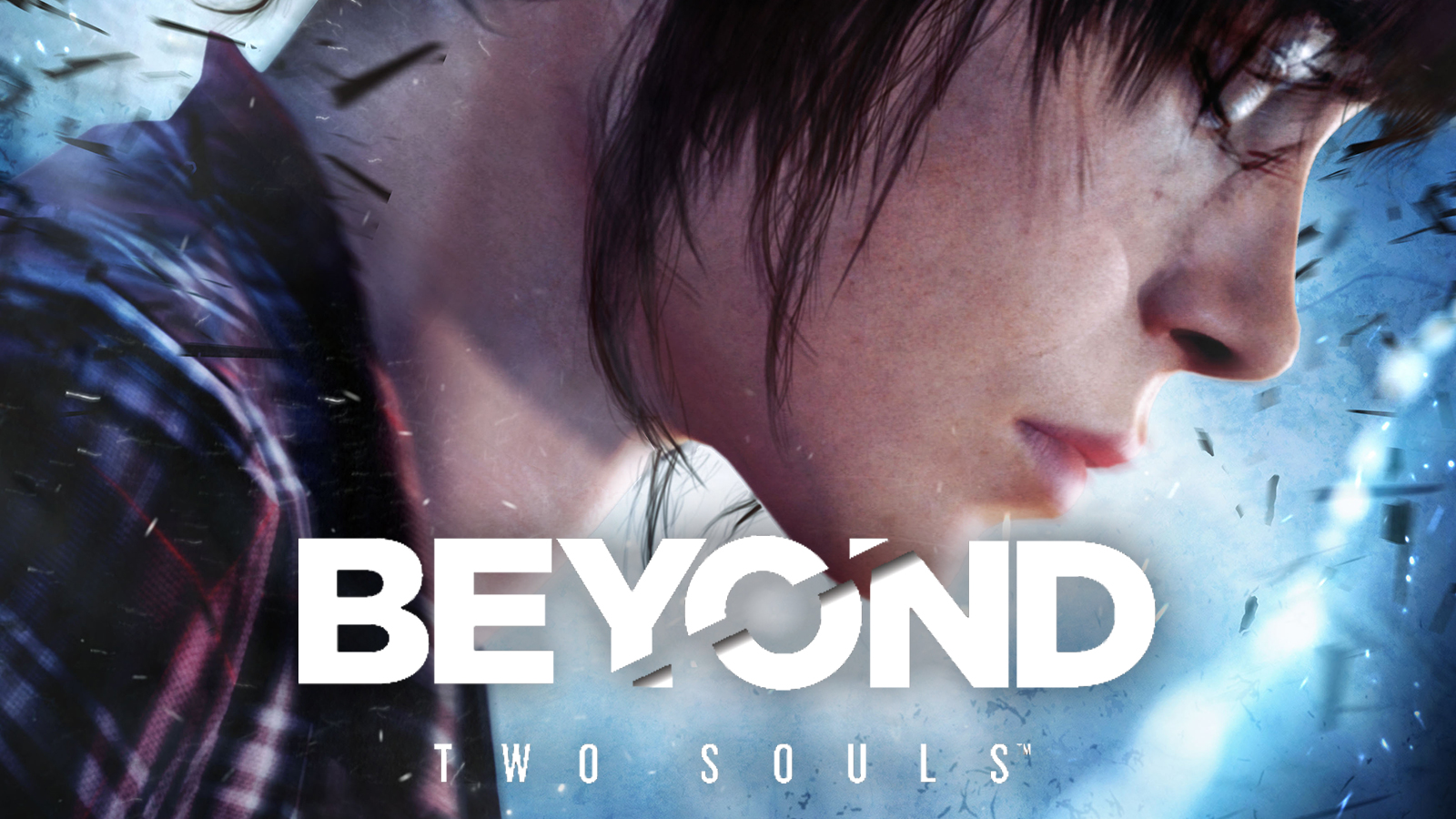 Beyond: Two Souls is an action-adventure interactive decision-based video game. It was originally released for PlayStation 3 on 8th October 2013. Later, it was released for PlayStation 4 on 24th November 2015. It is now available to play on PC via Epic Games Store, released on 22nd July 2019. Beyond: Two Souls was developed by Quantic Dream. They also had a hand in publishing the game alongside Sony Computer Entertainment. Quantic Dream have a huge history of creating amazing stories because they focus around interactive decision-based cinematic games.

A Story of Souls

Beyond: Two Souls stars Ellen Page and Willem Dafoe. Ellen Page plays a young and extremely special girl named Jodie. She is tied to an entity from another world/reality named Aiden. Willem Dafoe plays a scientist named Nathan who takes custody of Jodie to test her abilities and learn about her connection with Aiden. Throughout the story of Beyond: Two Souls, you will make decisions for Jodie and Aiden to determine what happens next. Everything you decide affects the way the story pans out. 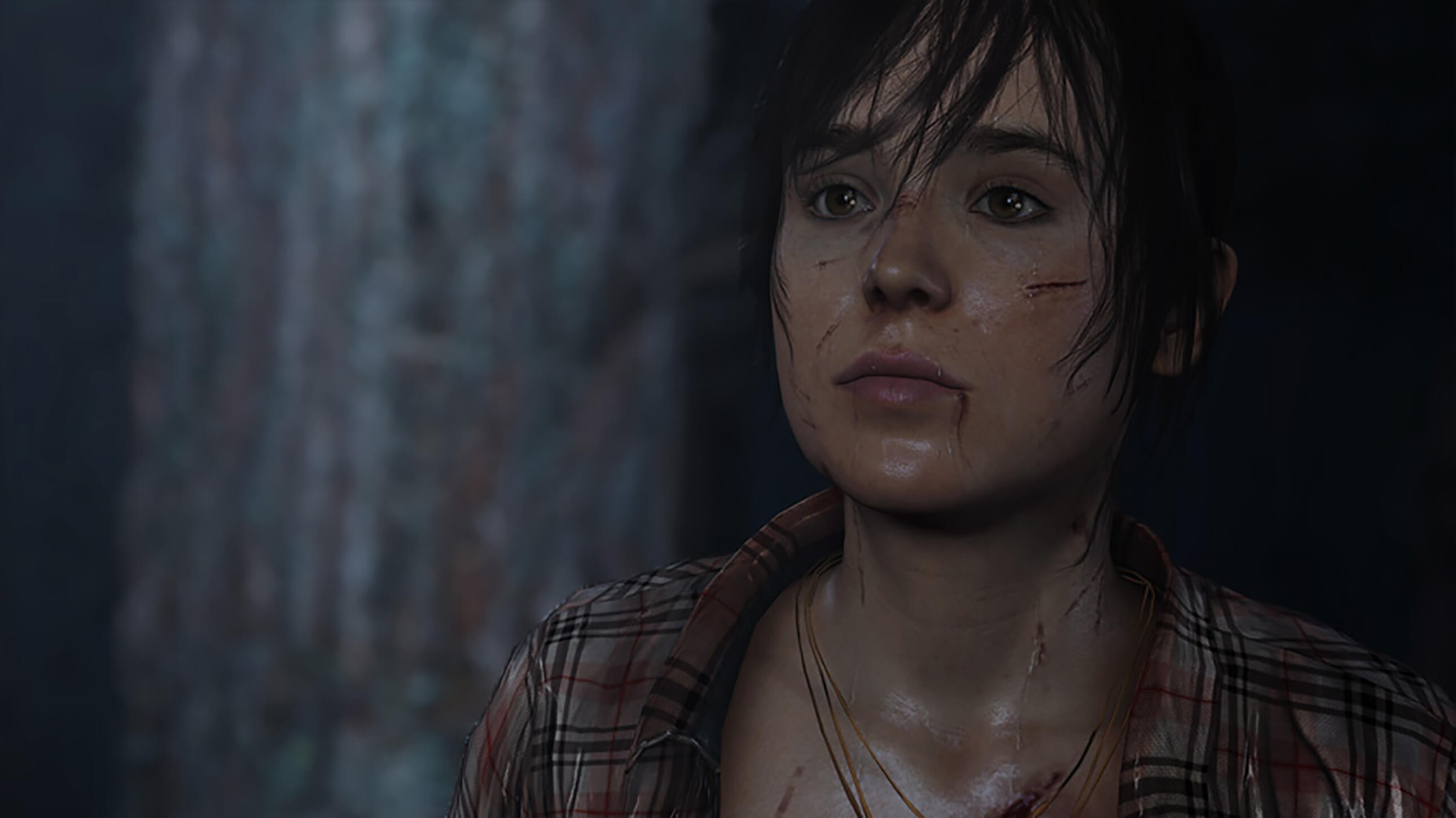 The game is split into chapters that vary in length, and they all cover key points of Jodie’s life. When playing the game on PC, you can decide whether to play the game in the way it was when originally released or to play a remixed version. In the game’s original version, you jump between different time periods in Jodie’s life. One minute you will be controlling Jodie as a child, then the next you will control her as an adult; you’re basically jumping back and forth in time. In the remixed version, you will play the game from Jodie’s childhood straight through to adulthood.

The key selling point for Beyond: Two Souls is the story. The bond between Jodie and Aiden is indescribable. Of course, there are moments where Jodie hates Aiden, like when Aiden gets a bit out of control or just won’t listen to Jodie. There are also some beautiful moments where you can see that Jodie really needs him. They take down their enemies together, both human and monster alike. As they struggle to survive, they become reliant on each other. Without giving anything away, there is a reason why they are so close. The whole story acts as an emotional rollercoaster with many twists, turns, ups and downs. 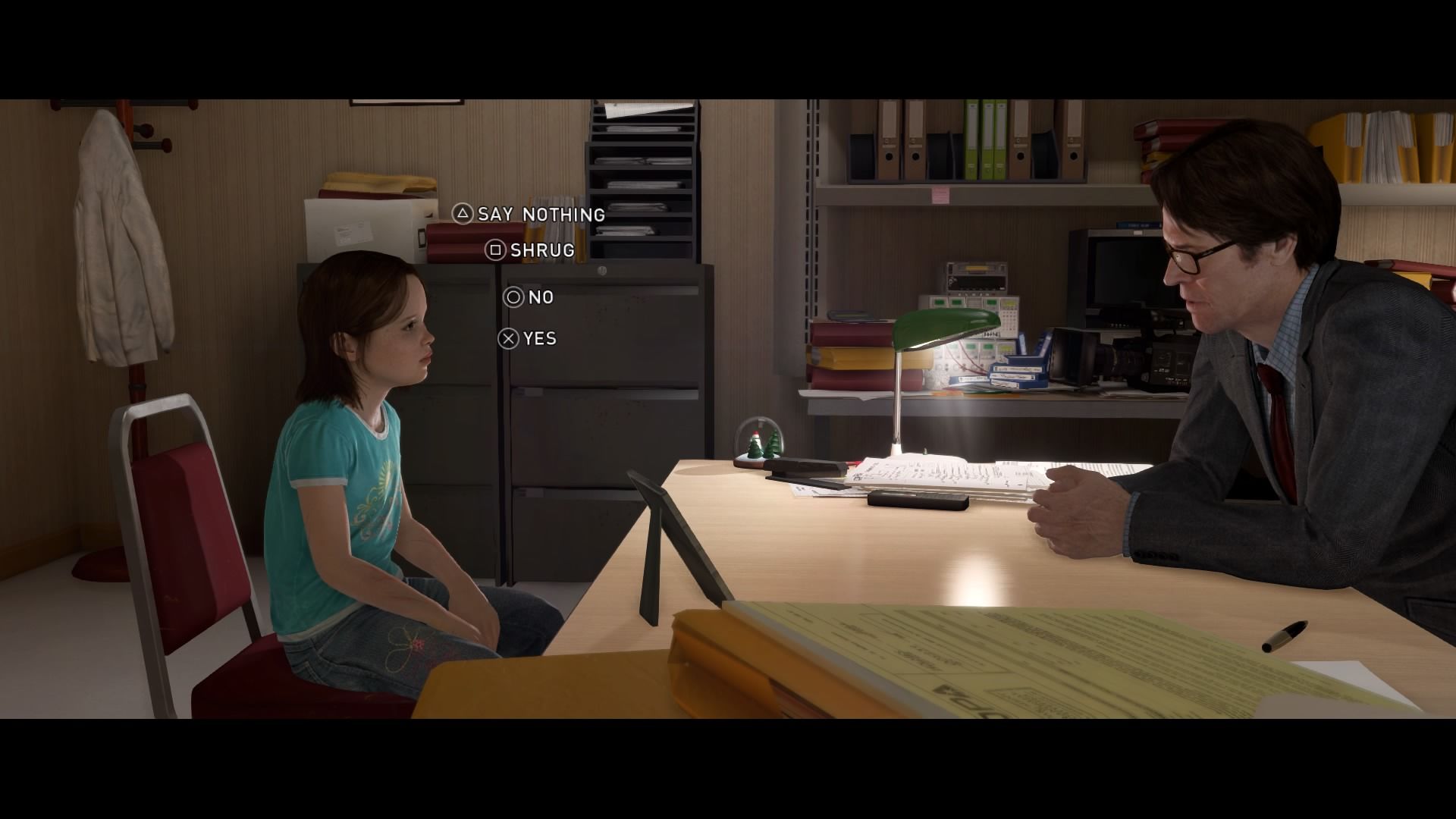 To be completely honest, playing Beyond: Two Souls on the PC is my first time playing it ever. I hadn’t played it when it was originally released on PlayStation 3, nor did play it when it was later released on PlayStation 4. I am sure that the game would have been much easier to play on console. The most difficult thing I found with playing the game on PC is getting used to the control system.

Thankfully, you can alter the controls and assign them to whichever buttons you like for your keyboard. The only thing you can’t alter are the mouse controls. I struggled to use the mouse when playing. There are certain movements in the game that require the use of a mouse, and they are not easy movements to make. I can imagine that these movements would have been done by using the analog stick for a console controller. Unfortunately, a mouse doesn’t provide the same fluidity for movement, and it meant that I struggled to make them work. 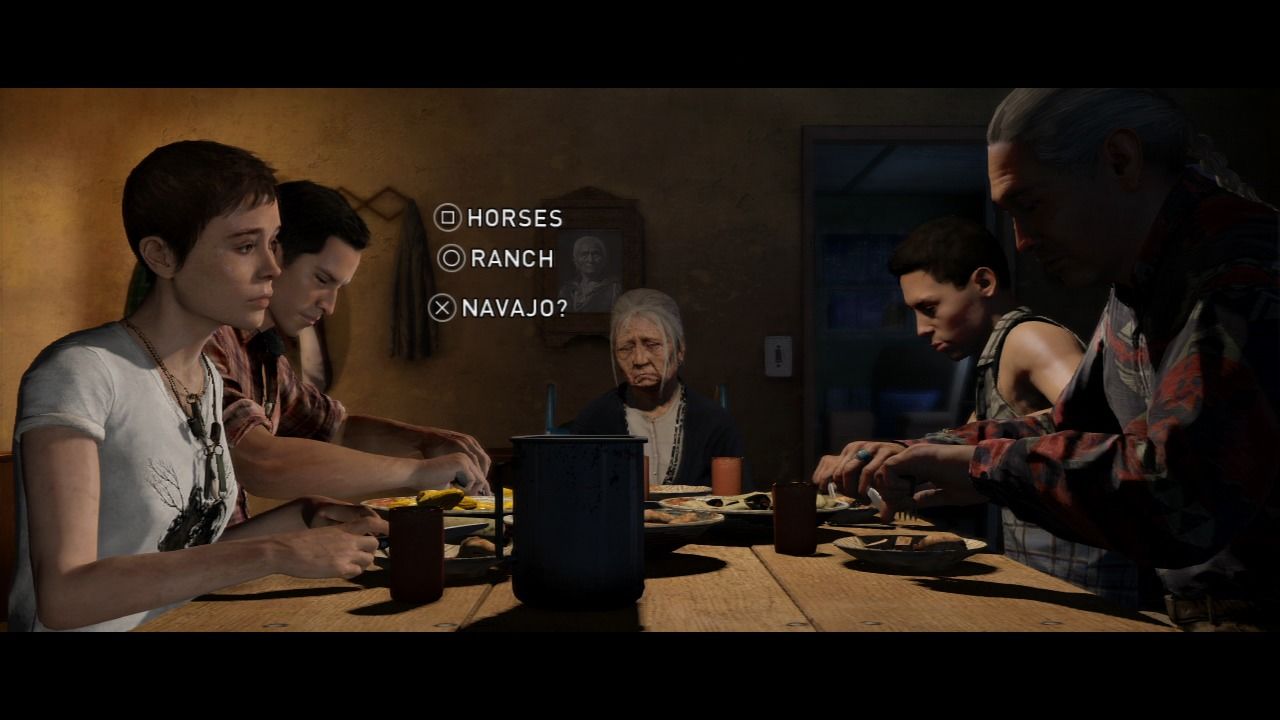 Beyond: Two Souls has a way of making you feel completely immersed and invested in the story. With Quantic Dream’s newest games, like Detroit: Become Human, this is done through its amazing graphics. Beyond: Two Souls don’t quite meet the same graphical standards, so I think the main reason that the game keeps you hooked is because of how unique and creative the story is.

You can tell by playing Beyond: Two Souls that it is a bit of an older game. One issue lies with the graphics of the characters’ facial expressions. There are times where they will be upset or angry, but you can’t really take them seriously because of the poor facial graphics. This kind of breaks the game’s immersion. With that being said, you can tell straightaway that Jodie and Nathan are being played by Ellen and Willem, respectively. They also still make a huge impact because you will feel emotionally invested. I can safely say I felt every emotion that Jodie felt in the game whilst I was playing. I cried with her, laughed with her, got angry with her and got scared with her. 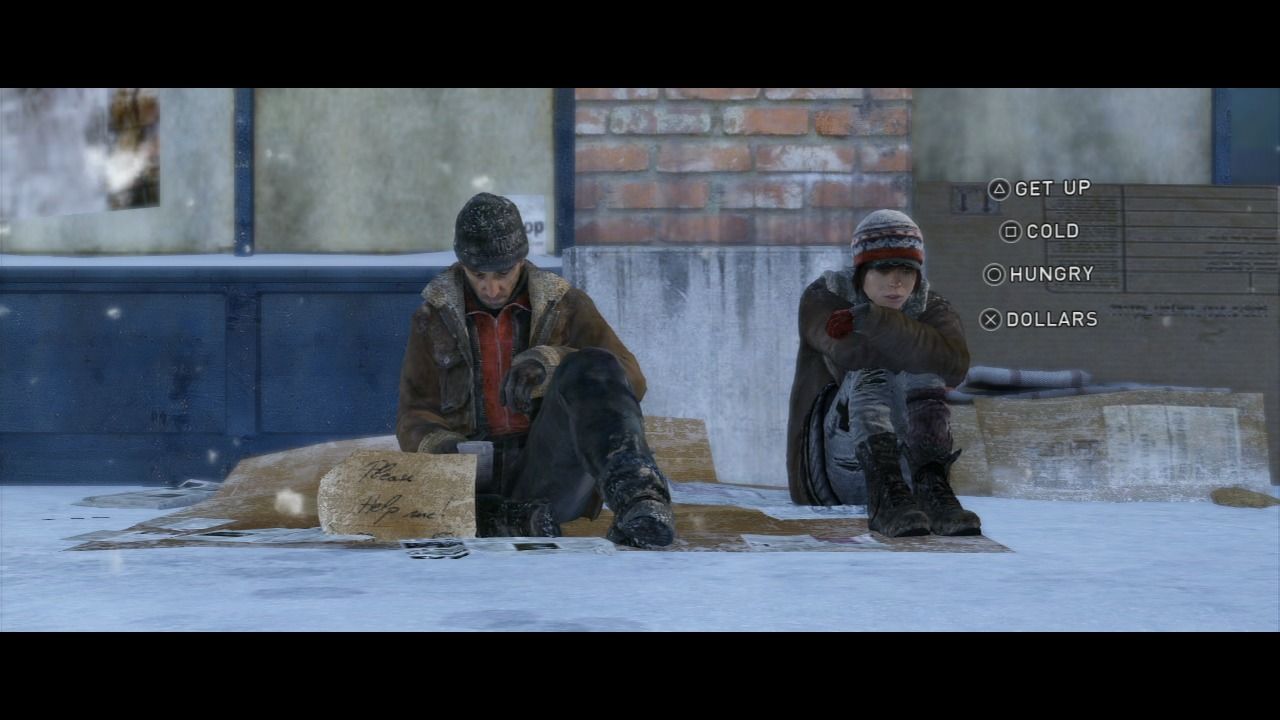 Beyond: Two Souls is clearly an amazing game. The question is, “Does it work on PC?” The answer is, “Yes”. I am so glad to have played Beyond: Two Souls on PC because I probably wouldn’t have played it at all if I didn’t play it on PC. The game has a beautiful, creative and immersive story. There are some small issues with the control system being adapted to PC, and the graphics don’t quite meet today’s standards because the game is quite old, as I have mentioned. However, I think that would just be nitpicking at issues that aren’t very big deals. 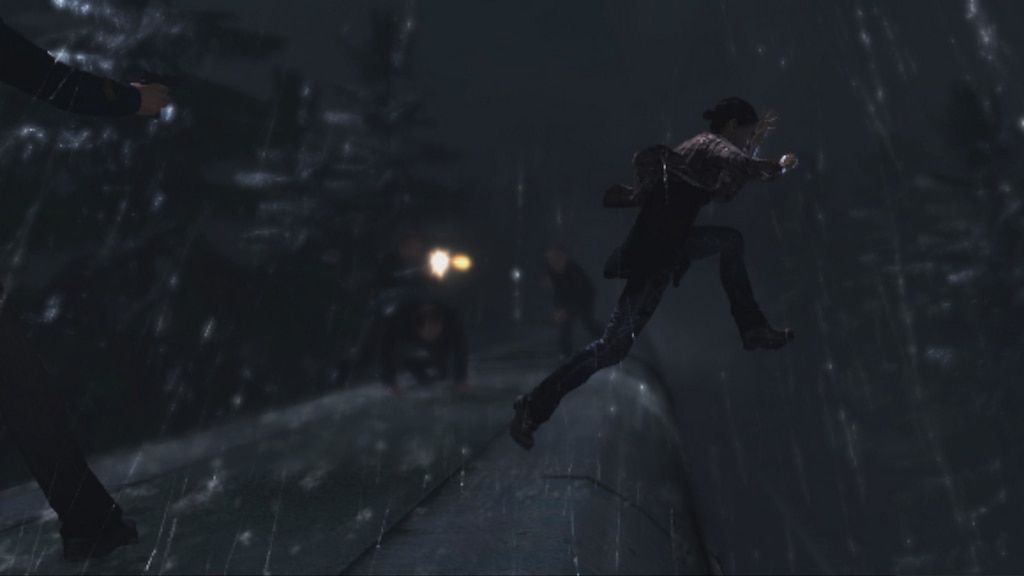 I would definitely recommend this game to anyone that loves a great story because there were also no loading or glitching issues. The game had the decision-making and cinematic parts that make Quantic Dream’s games so amazing, but it also has a lot of action and freedom to go wherever you want. You get a fair amount of exploration with the gameplay, which a lot of new decision-based games don’t offer. 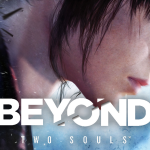 Beyond: Two Souls tells the beautiful story of Jodie and Aiden. Jodie is an extremely special young girl who is tied to an entity from another world named Aiden. The game has some very small issues regarding the control system, but it makes up for this with an amazing, emotional rollercoaster of a story. Ellen Page and Willem Dafoe star in this creative and immersive game that has recently been released for PC via Epic Games Store. 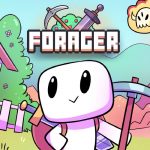 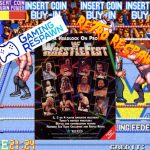