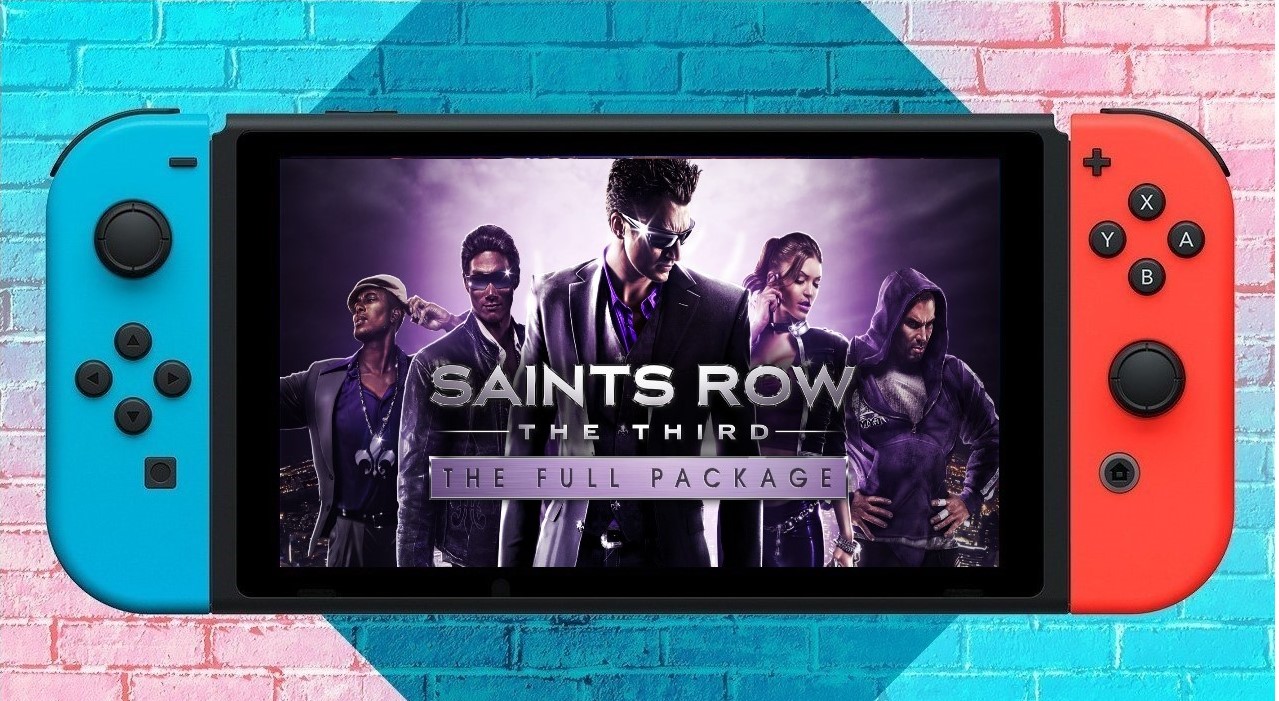 I have to admit that I have a soft spot in my heart for Saints Row: The Third. The third game in the series did what it needed to do to stand out from Grand Theft Auto: be different. Saints Row 2 was a gritty, realistic take on the open world formula. It was pretty much trying to be GTA, except with a different name. Then came Saints Row: The Third, which took an over-the-top take on the open world genre and created a genuinely funny, unique open world game. Now eight years later, Nintendo’s audience is finally getting the chance to play a Saints Row game on Nintendo Switch. The game is still as crazy as ever, and being able to play it anywhere on Switch adds value to the title. It may not be the definitive version of the game we were hoping for, but Saints Row: The Third- The Full Package is a must buy for Switch owners. 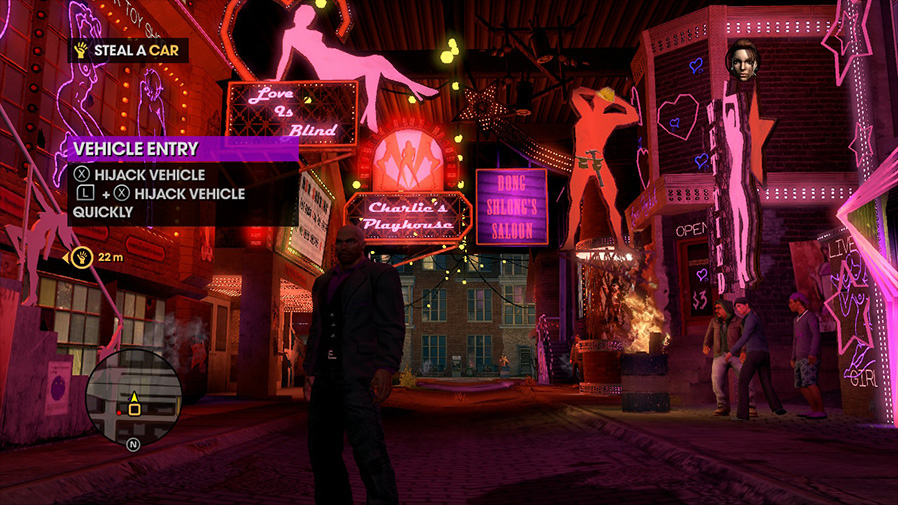 As I mentioned above, Saints Row 3 (or The Third) is not a brand new game. Developed by Volition in 2011 and released on PS3, Xbox 360, and PC, Saints Row: The Third sees players control The Boss, a player- created character that leads the Third Streets Saints gang in a turf war against three rival gangs to take control of the fictional city of Steelport. Saints Row: The Third- The Full Package takes the original game, plus all the DLC content, and combines it together into one, well, full package on Switch. It should be noted that despite saying “All previous DLC is included”, the Switch version is missing 2 DLC packs that were cheat packs. Basically, these DLC packs provided cheats that allowed players to break the game even more, so they were left out for obvious reasons.

One of the things Saints Row: The Third does so well is incentivize its open world. So many open world games have lots of things to do in their open world but never feel like there’s much of a reason to do so. Why do this escort mission when it only earns me 200XP? Why follow this one NPC around undetected, only to gain a skill point for my sneak ability? It’s an issue with most open world games, but Saints Row: The Third gives incentives for completing missions in its world. Completing sidemissions will earn you either money or respect. Money can get you territory control, weapons, upgrades, buildings and business. Respect works a lot like experience points, letting you unlock new abilities, such as “infinite sprint” and “no fall damage.” Everything in the game rewards you, from near collisions while driving to running down the street naked, they all earn you respect. There’s even an ability to steal people’s money just by walking into them. The game rewards you for doing just about anything in its world. I am still playing Saints Row: The Third daily on Switch for this reason. The sidemissions reward me and make me want to play more. 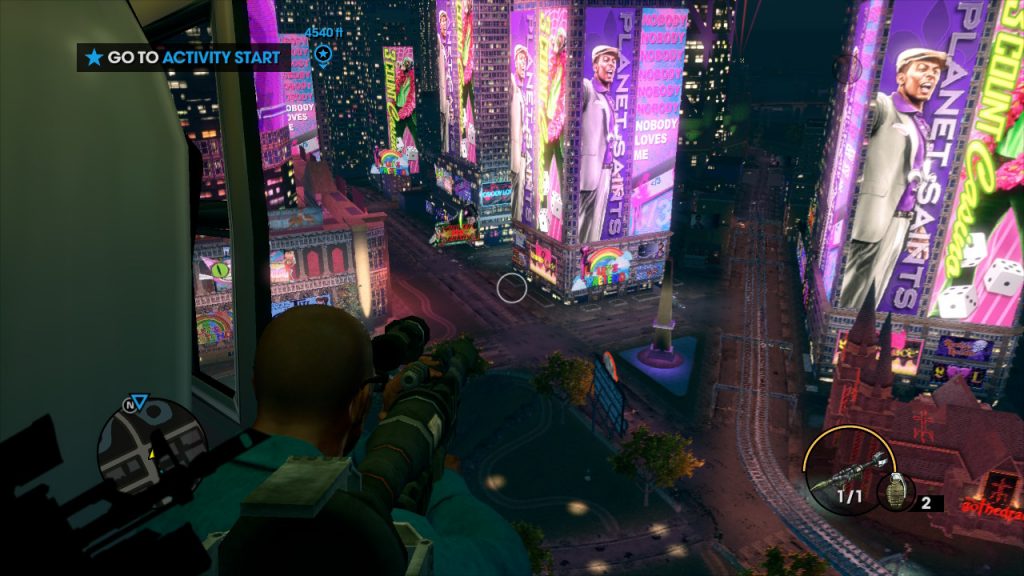 Another thing about Saints Row: The Third I love is, well, the game style. Saints Row: The Third isn’t going for realism. It’s not trying to be ultra realistic, it’s purposely going for over-the-top, crazy, stupid, funny action. It’s what makes it my favorite Saints Row game. It finds the right balance between still wanting to be like GTA (like Saints Row 2) while not going so over-the-top and ridiculous like the superhero characters of Saints Row 4. There’s something funny and very oddly satisfying about beating a person to death with a giant, purple dildo. There’s something ridiculous but, again, satisfying about doing an entire sidemission where you’re a rag-doll throwing yourself in front of cars to earn money. Saints Row: The Third doesn’t take itself seriously, and I love it. Sure, some of the jokes are a bit dated in 2019 (to be fair, they were slightly dated in 2011). Sure, characters swear in the game simply for the sake of swearing. Yet none of those things take anything away from Saints Row: The Third. It’s a great time and a game you can sink many, many hours into.

On Nintendo Switch, Saints Row: The Third really shines for a few reasons. First, there’s no game like it on the platform. For some odd reason, there’s no Grand Theft Auto on the platform, meaning Saints Row: The Third occupies a space all for itself. For people looking for that type of game on Switch, Saints Row fits perfectly. Second, like most games on Switch, being able to play the game anywhere has a huge appeal. The game’s sidemissions are bite-sized enough for the quick pick up and play style of the Switch. It’s the type of game you don’t have to focus your attention on completely and yet still have a fun time playing around in its world. Third, the game has built in co-op (both locally and online), which makes the Switch version a lot of fun to play with a friend in the same room. It’s a small detail, but it’s one that is incredibly satisfying. 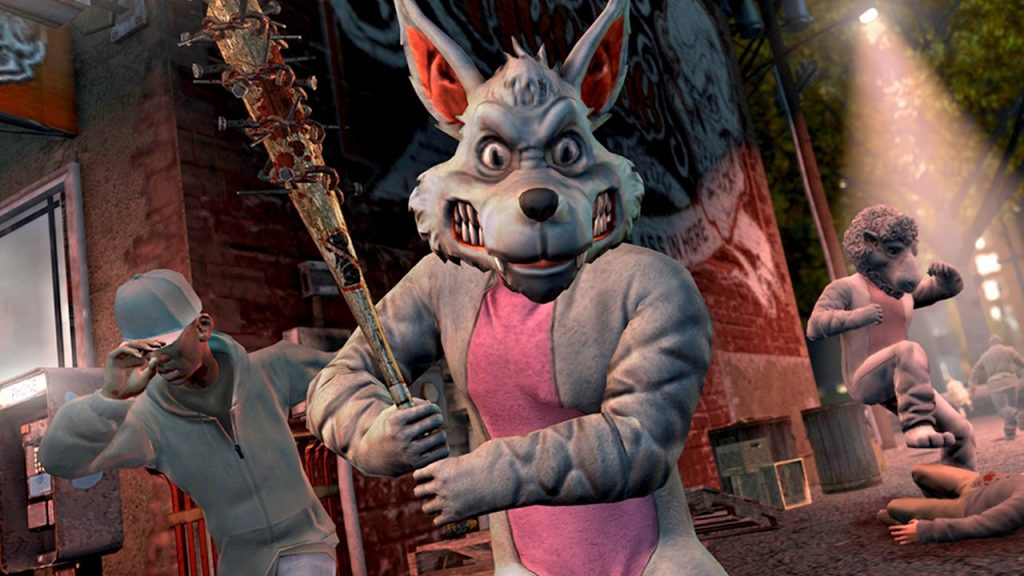 The thing about Saints Row: The Third on Switch is that it looks and feels like a game from 2011. Gunplay is a little off, there’s no way to duck behind cover and enemy hit boxes are…inconsistent at best. Most of those things I don’t take as a really big deal because this is a port of that game, not a remaster. While I’d like for those things to be fixed or adjusted, I can’t really complain with a straightforward port. Yet that brings me to my biggest issue with Saints Row: The Third on Switch. This game has been around for eight years. EIGHT YEARS. There has been plenty of time for adjustments to be made to the title. There was even an opportunity to have the Switch version be the very best version of the game. Some work could have been done to improve the visuals, the gameplay, checkpoint issues, anything. Yet literally nothing was done to the game. It is an exact copy of the 2011 game with all the DLC. Nothing was changed. On one hand, that’s okay because I’m getting exactly the game I remembered. Yet we’ve seen this happen over and over again with Switch ports. Developers don’t do much to the game beyond what seems like a simply copy and paste. Yes, a lot of time was spent by the developers bringing the title to Switch. However, with eight years of input and data, you’d think the developers would have taken something from that information and improved the game. Not this time.

Another thing that needs to be mentioned is performance issues. I want to point out in my 26 hours of play time with the game, I have not run into most of these issues; however, a number of people have, so I’m bringing them out to you. For some people, the game runs at a fairly poor frame rate. To be fair, the game never ran at a good frame rate originally, but a number of people are having this issue on Switch. Frame rate will drop down into the 10s and then randomly jump up to the mid 40/50s. The issue is apparently made worse if you play the game in docked mode, where people have reported major issues with frame rate, audio sync, and resolution issues. There’s also an issue with input lag, which is an issue I faced when I first played the game. For some reason, there’s noticeable input lag when driving or shooting a gun. It takes a while to move, and it’s not as responsive as it needs to be. I found that changing the settings and turning the sensitivity up to max helped this issue out greatly. I reached out to the developers of the game who told me many of these issues are currently being worked on in a new update. Overall, I didn’t run into most of the issues listed above, so it didn’t have a great effect on my experience with the game.

NOTE: The game was announced to have support for voice chat via the Nintendo Switch Online app. This feature has not been implemented yet for use in the game. The developers say that it is being added in “real soon.” 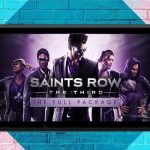 Saints Row: The Third- The Full Package on Nintendo Switch is an insanely over the top game you must play. Its unique take on the open world formula is funny, absurd and refreshing. It's a genuinely fun experience to play in an open world that actually rewards you for being in it, and its fun take on gameplay makes you want to keep playing more. Even better, the Full Package version of Switch provides all the previous DLC into one great package. Unfortunately, what you get here is a straightforward port of the 2011 game, meaning some of the issues the game had then are still present. There are also some issues people have with frame rate, resolution, and input lag problems on Switch (something I didn't experience much of in my time with the game). Saints Row: The Third is the perfect game for people looking for a crazy, open world adventure on Switch! 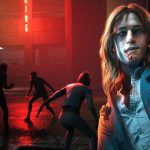 Players Will Get Choice of Clans in Vampire: The Masquerade- Bloodlines 2 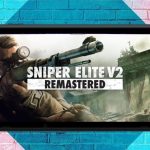