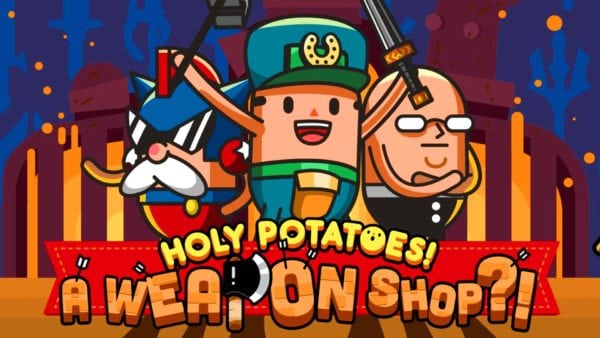 Holy Potatoes! A Weapon Shop?! is truly a unique game, as its title suggests. It’s a game that doesn’t take itself seriously and is well aware of the absurd concept of a potato running a weapon shop. Yet the fact the game doesn’t take itself seriously is part of the fun. It’s a simple, joyful game that is perfectly suited for the Nintendo Switch. It’s a game you can spend just a couple of minutes with or take a deep dive in for hours of fun. Don’t let the wacky title or look of the game stop you from playing a spud-tastic game. 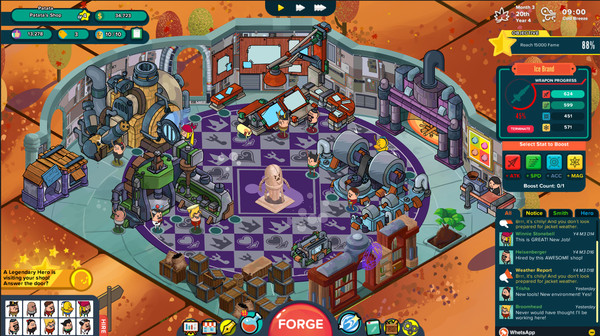 Holy Potatoes! A Weapon Shop?! originally launched on PC back in 2015 and shortly after found a home on mobile devices, now it’s made its way to Nintendo Switch and PS4. The premise of the game is fairly simple: You are a potato who just inherited less than 1% of a weapon shop. It’s your job to take on the business and expand it across the universe. Doing this requires a bit of trial and error, but soon you’ll be on top of the potato weapon universe.

Holy Potatoes! A Weapon Shop?! is a micro-managing business game. Put simply, the whole gameplay premise is to manage your business by setting commands for your workers. These commands range from finding supplies to use as weapons, to crafting and actually selling such weapons to locals. There are plenty of things to do in this game, with more than 20 different areas to unlock and sell your weapons in. The gameplay loop, the amount of time in which you give commands to your workers and the time it takes to complete said task don’t take very long. The fun of the game isn’t just telling your workers to do this or make that, it’s about improving your design with better stats and attributes, which can be an addicting gameplay element. Finding certain blacksmiths or even certain supplies can grant you ability boosts, adding more attack power or greater speed to an item. The better the stats, the better the sale price. It’s your job to manage this while making sure your business doesn’t go bankrupt. Too many cases bankruptcy and your potato business is done for good. 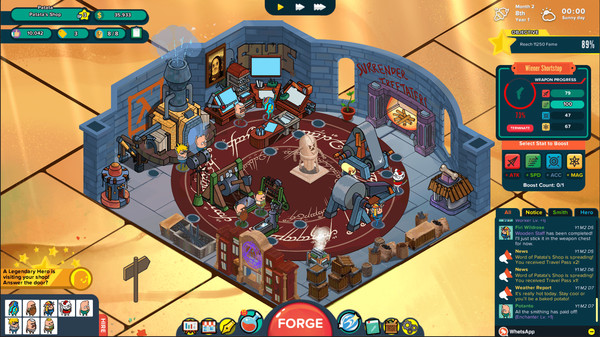 This short, addictive game style works perfectly on Nintendo Switch. It’s really fast and easy to set commands to my workers and walk away from the game, only for me to return later and find the tasks done. I actually found myself playing this game mostly in handheld mode as it was a fun game to play while the TV was on. It should be noted that there are a couple of issues from the PC version fixed for the Switch release. The ability to fast-forward and pause the game helped a lot. I no longer have to wait for the tasks I give workers to play out so slowly.

My biggest issue with Holy Potatoes! A Weapon Shop?! is how terribly the game was adapted to the Switch. Don’t get me wrong, the game runs very well on Switch. The problem lies with the interface. Moving through menus seems like a massive chore, the Joy-Cons don’t feel like they were mapped to control the options on-screen, and even the touch screen didn’t really work great. The main issue with touch screen controls? There’s simply too much on the screen at any one time. How can I choose to do something when there are literally 9 different text boxes all over the screen blocking my view? The tutorial doesn’t help with this at all, it literally just dumps a bunch of text on-screen telling you how to do things all at once. It’s true the game has a simple gameplay mechanic, but controlling it is incredibly difficult, almost frustrating at points. While I wouldn’t say this is a complete game breaking issue, many people unfamiliar with this style of game may be off-put almost instantly by this issue.

Alternatively, see our review of the wacky unique RPG West of Loathing HERE 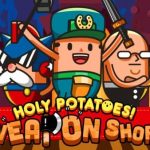 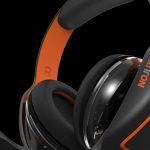 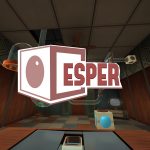