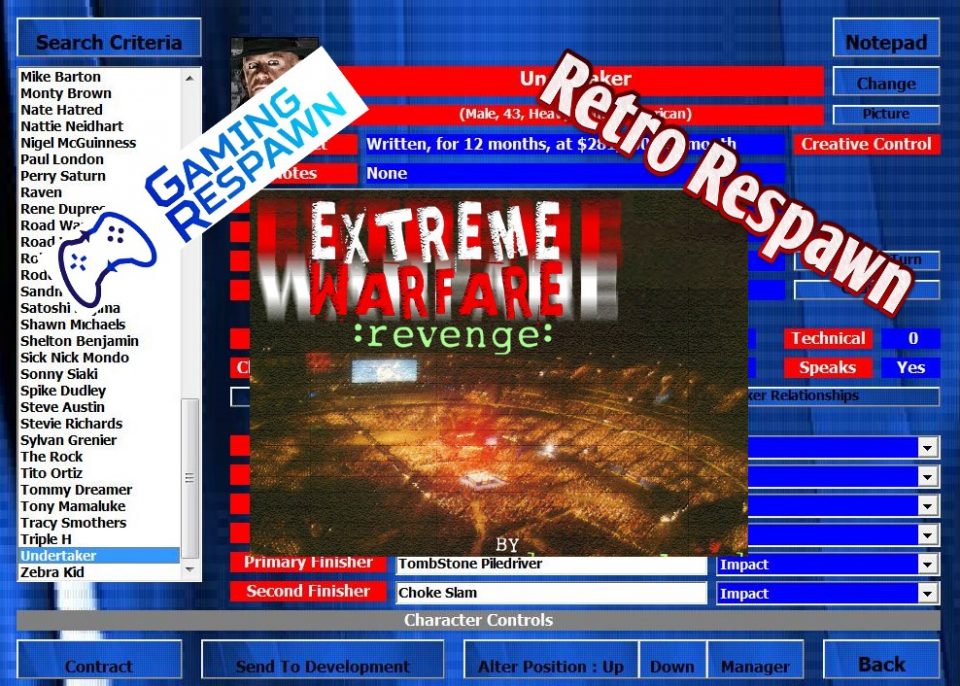 Extreme Warfare: Revenge (EWR) is a game that any fan of sports management sims shouldn’t have too much difficulty wrapping their heads around. Whereas a game like Football Manager is designed around you becoming a manager of a football club and trying to lead it to success, EWR is about taking both the business and creative reigns of a professional wrestling company and trying to make it the most successful wrestling company in the world. Along the way you will have to deal with egos in the locker room, please television companies by maintaining strong ratings for your televised events and also try to ensure your company remains in the black by bringing in money via sponsorship deals and (eventually) pay-per-view revenue.

Of course, the core difference between a game like Football Manager and one like EWR is that you are in control of the results that take place on your show. In some ways this should technically make the job easier, but a lot of similar issues that you might find in a game like FM also rear their ugly heads in EWR. For instance, whereas a player who isn’t making it into the team will become unhappy in FM, a wrestler who continually finds themselves left off your events will also start to get upset as well, especially if they are one of the more popular wrestlers near the top of the card. Additionally, even though professional wrestling isn’t a competitive sport as such, it is still a physically demanding pursuit that carries its own set of dangers, so if a wrestler is fatigued, then having them continue to wrestle will increase the chance of them getting an injury, just as it would in FM. 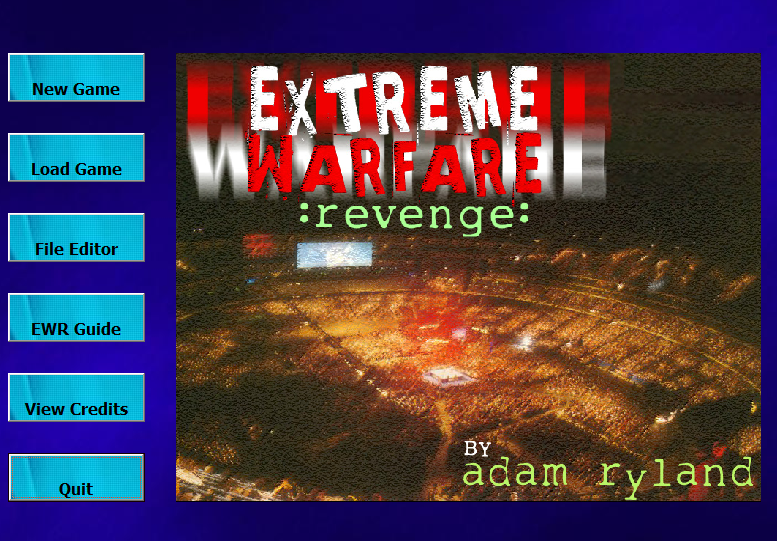 Predominantly, your main job in EWR will be to put together (or “book”, as it is known in wrestling parlance) the wrestling events that your company presents with the goal of creating exciting shows that will enthuse your audience whilst also ideally ensuring all of your wrestlers are happy and constantly gaining in popularity with the baying crowds. The size of the companies in the game range from worldwide viewed “global” level ones all the way down to “backyard” companies who hold their events, quite literally, in back gardens in front of barely double figure-sized crowds. The size of your company will not only define how much money you can afford to spend on wages for the wrestlers you bring in to the fold, but it will also have an effect on what wrestlers will choose to wrestle for you. For instance, if a wrestler is hugely popular and you only happen to run a “small” or “regional” sized promotion, then there’s a good chance they won’t agree to work for you. Even worse, they might agree to work for you but then leave you high and dry once a better offer comes along.

This can be especially annoying if you have been promoting the wrestler in question as one of your top attractions as it will leave a gaping hole in your cards that you might not be able to fill. This not only mirrors what can happen in the real world of wrestling (ask ECW fans about Eddie Guerrero and Dean Malenko jumping ship to WCW in the mid-’90s, for instance) but also mirrors a game like FM somewhat as well (as anyone who has had their star player poached by a team in the Premier League on an FM playthrough can attest to). Should you be lucky enough to be handling things at a “global” or “national” sized promotion, then you can tie your wrestlers up to long term details so that other companies can’t poach them from you, but that will often mean you having to part with more money than if they were just on an open contract. 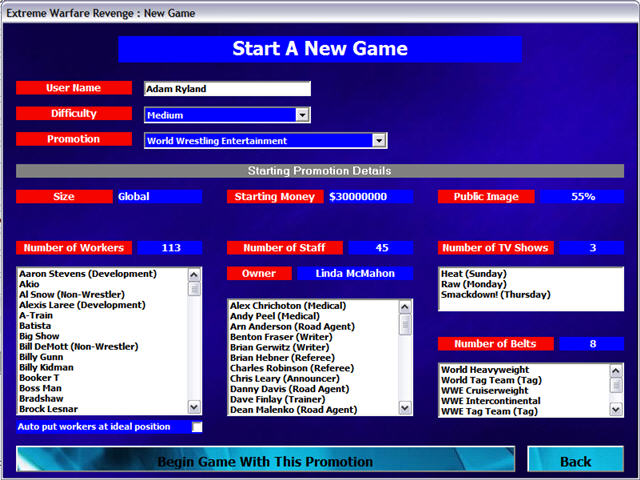 The main thing you’ll want to achieve in the game is to either attain some exposure on a television network or ensure any existing show you already have is getting the sort of ratings the television execs expect it to get. In order to get onto television, you may need to improve your production values (meaning a raise in the monthly budget), or you may also need to amend the type of product you present in order to make your company attractive to prospective networks. Every company has its own “risk” level that you can amend to your own personal tastes. The riskier your product is, the more adult-themed it will be. Having a high risk product will give you a larger choice of violent specialty matches to choose from and will also allow you to give your wrestlers more specialised adult-themed characters. However, a higher risk level will also mean that some sponsors and TV networks won’t want to do business with you, so you will need to cut your cloth accordingly. Having a lower risk level generally means you will have a better chance of attracting more mainstream sponsors and TV networks, but it will also mean that you will have to produce a much safer and generic feeling product, which will sometimes make it harder to put together exciting shows.

Getting onto television will give your promotion greater exposure and will also bring in more revenue at the box office due to you running more shows. Having good shows will see the popularity of your company grow, whilst bad shows will see it deplete. If you start on top as a “global” level company, then your target will be to remain on top, as well as seeing off potential challengers, whilst starting lower down the rung will cause you to focus on growing your company in popularity so that you may one day sit atop the mountain. How you utilise the roster you have at your disposal will be important as some wrestlers will be better at certain things. For instance, a wrestler like Dusty Rhodes will have high charisma stats but not such impressive in-ring wrestling skills, so putting him in positions where he can deliver interviews or take place in skits or “angles” will be the best way to get the crowd engaged in him, whilst a fine in-ring technician but light on charisma wrestler, like Brad Armstrong, would be better served getting in there and having good matches with other talented “workers”. 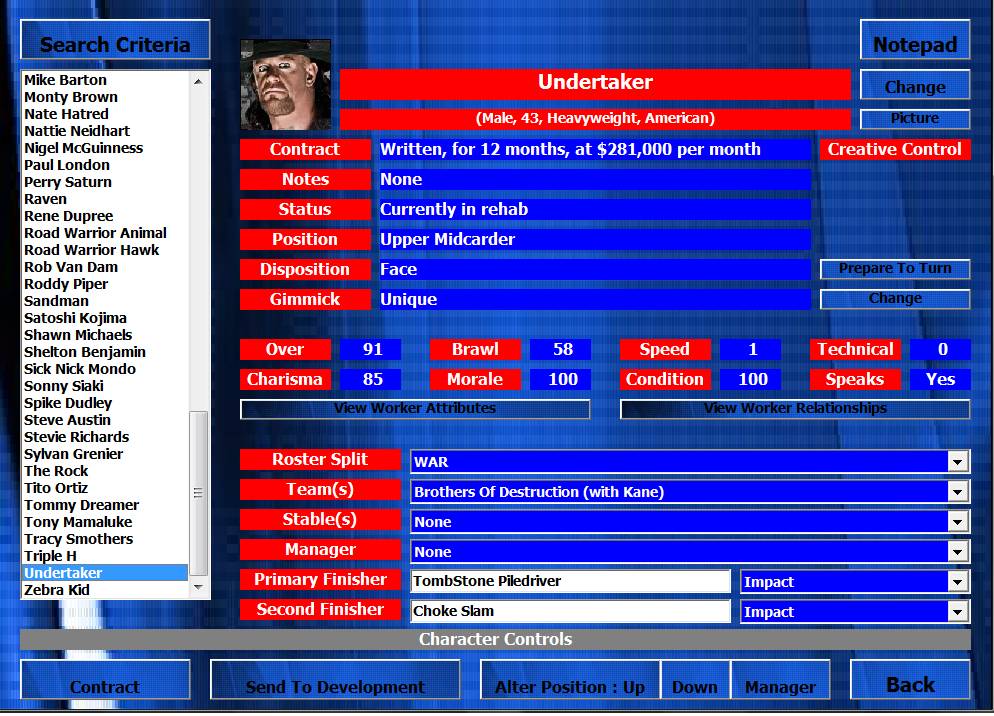 Sometimes you might hit the jackpot and get someone who is both great in the ring and on the microphone, like Ric Flair, and these are the sorts of wrestlers that you will ideally want to put in key roles on the show. You have the option to hire writers to help you with the creative process, and the head writer will often make you aware of which wrestlers are the most popular with your audience, as well as let you know which wrestlers could do with a change of character if their current one isn’t working or is getting stale. Wrestlers with a bad character will lose popularity (or “overness” in wrestle lingo), so it’s a wise idea to repackage them if the writing team lets you know that their popularity is sagging. As well as writers, you will also need to hire other staff, like announcers, referees and road agents, to ensure you put on the best product possible. Road agents are essentially people who police the backstage area and ensure that wrestlers know what they are doing and also stay out of trouble. Having a lack of them will often lead to things getting out of hand in the backstage area, especially if you have wrestlers on the roster who don’t get along with one another.

I could go on for even longer as to how labyrinthine and deep this game is. For a freeware game created by one person (Adam Ryland), it’s a wonderfully deep experience, and the impressive Edit Mode on offer in the game means that there are lots of different data packs that you can download that cover many eras of professional wrestling, as well as some fantasy scenarios. I’ve lost count of how many EWR games I have on my laptop these days, with save files ranging from 1986 all the way up to the modern day. 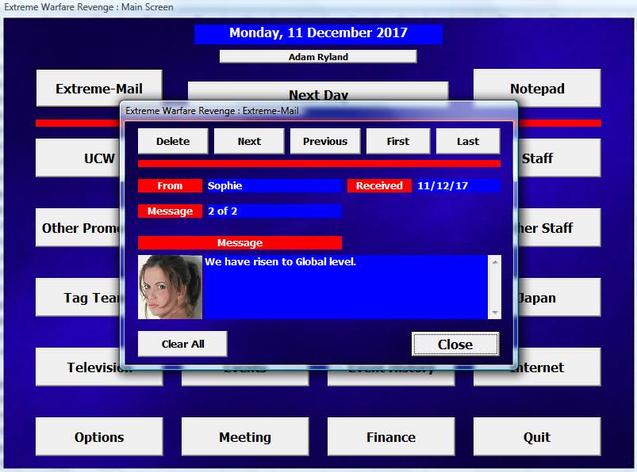 The fact that Ryland has moved on to making the even more detailed “Total Extreme Wrestling” series hasn’t stopped people from making new data packs for EWR, and considering the game is free and still very easy to get a hold of, I have to strongly recommend that you pick it up. A quick Google search should bring it right up. I’ve been playing it for seventeen years now, and I still love it. I can lose whole evenings to this game, and it’s still wildly engrossing after all these years. If you’re a wrestling fan who has enjoyed the odd game of Football Manager, then this game could be right up your street. There’s a very detailed guide that can be found inside the game, and I strongly suggest giving it a read if you’re playing for the first time as you genuinely will be surprised just how far down the rabbit hole you can go. 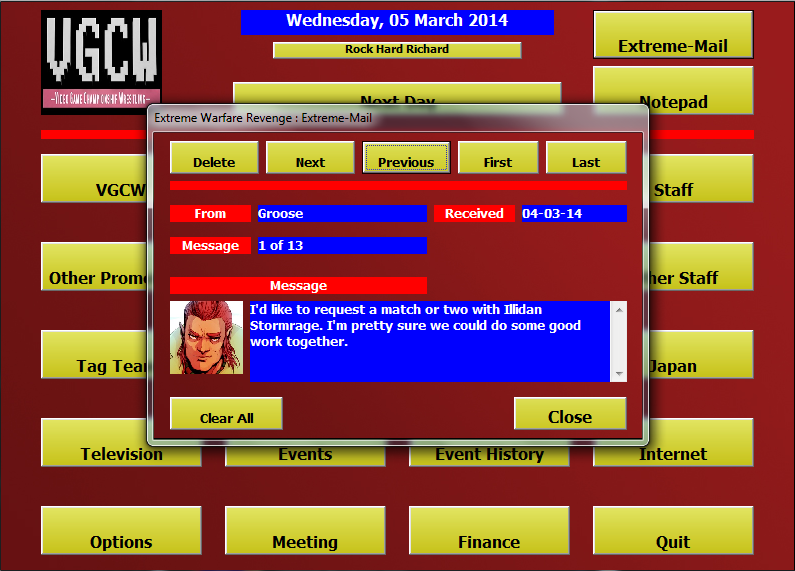 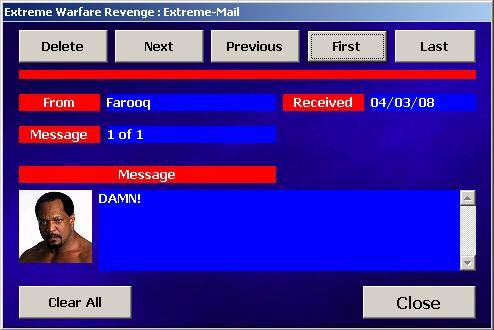 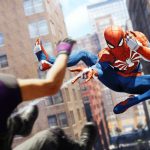 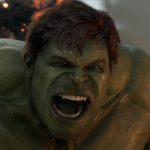