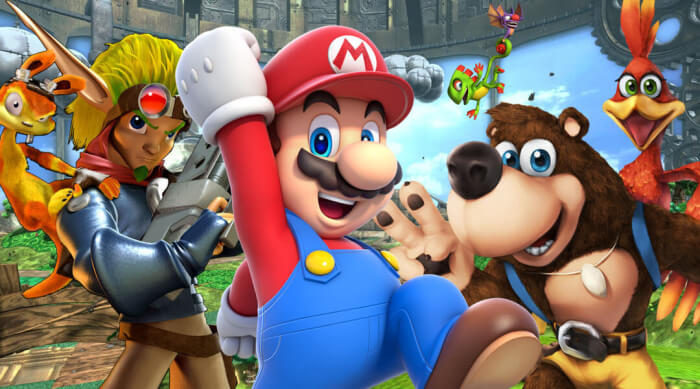 Oh readers, we really must stop meeting like this. People will start to talk, anyway let us continue on our journey through the 3D platformer genre. This week contains some truly diabolical entries, but manages to finish off on a high note that I think you will enjoy. 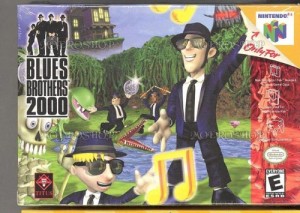 For anyone who doesn’t know, Blues Brothers 2000 is a terrible sequel to the amazing Blues Brothers movie, and despite the film’s poor quality, I was optimistic that the game could potentially be better. I mean, there used to be some quite good movie tie-in games back in the day, unfortunately this is seriously not one of them.

The game’s story concerns Elwood Blues attempting to escape from prison and reunite with his band before the battle of the band contest in 2 days, just like the movie! The story is pretty much trash, but honestly it’s based on the film, so what did you expect?

First things first, the game looks awful. You can tell that the characters and environments are designed with a cartoon aesthetic in mind, but everything just ends up looking warped and awful. Elwood just looks like he suffers from Acromegaly (look it up) and has a huge head and hands, and all the other characters look grotesque. Much worse, the levels are all pretty bland, but at least they’re very bright and colourful to go with the cartoonish design.

The music and sound effects are terrible which is a shame considering that the game is supposedly based around music. The main point is to visit each level in the area and get all of the notes that are scattered around, if you get to the end of a world and you haven’t collected all the notes, then you are sent back to the level select screen and have to go back in to finish your collection.

Control wise it’s a very simple game, and doesn’t control awfully. You have a jump (obviously) which takes you a very short distance into the air, a punch attack combo that usually completely fails to be effective, and finally a jump stomp which is the only attack you will ever need to use.

The levels are pretty weak and mainly consist of just a single room each with a challenge or obstacle placed in the middle of the room, usually alongside some hidden notes and points. Occasionally, there is a side scrolling style segment or some other mini-game, but usually you’re just running around stomping on bad guys. Worse than that are the boss fights, the first of which consists of a dinner lady that is trying to throw food at you. The fight is awful because the camera keeps swinging behind a wall so you can’t see what you’re doing. The next boss fight is against the prison warden whose attacks are literally impossible to avoid, not great.

Lastly, there is the worst element of the entire game, the thing that made me want to rage quit so hard that it actually burnt inside my soul, the rhythm mini-game. In each level you have to perform a terrible rhythm game to learn a dance move from one of your friends. Each one of these mini-games simply consists of a bar that flashes blue occasionally and you have to hit either a single button or a button combo, doesn’t sound too bad right? Well it wouldn’t be except that it seems to only decide if you’re successful when it feels like it, and half the time it’s literally impossible to get it correct anyway as the blue flash appears before the actual bar does.

Overall: A terrible game, based on a terrible film. Even if you love the Blues Brothers you really shouldn’t bother trying to play this game, you will only give yourself pain. 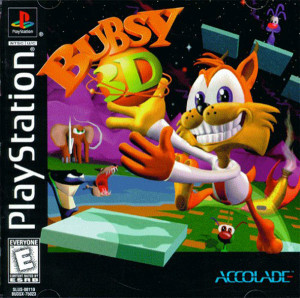 Wow, we are really on a bad game run at the moment, so far we’ve had Bionic Commando, Blinx, Blues Brothers 2000, and now Bubsy 3D. The worst part about all this is that Bubsy 3D is easily the worst one, and definitely the worst PlayStation One game that I have ever played in my entire life.

The story is about Bubsy, who crashed on an alien planet controlled by his enemies the Woolies, and he must collect the parts of his spaceship to repair it and escape from the planet. Sounds easy enough, so why is the game so bad?

Well, the main reason for that is the controls, they are awful. You control Bubsy via a tank-style control taken straight from Resident Evil, however, here slightly tapping right or left on the D-pad makes Bubsy shoot left or right wildly. It really makes it difficult to move from point A to point B and even worse if you have to platform across gaps at an odd angle. As well as running around you can jump and have a glide ability, which for some reason is mapped to triangle instead of being mapped to a second press of the jump button.  The jumping and gliding are awfully difficult to use and they are your only method of attack, they’re not helped by the camera swinging downwards every time you jump, which just makes you feel seasick.

Moving on from the controls to the graphics things don’t improve, the entire game has basically no texturing and doesn’t look like an actual planet at all. The platforms are all grey and blank and the draw distance is basically 3 feet in front of your face. The enemies and Bubsy are okay, but they’re still not animated well at all and even the unique enemies aren’t particularly well designed mechanically or graphically.

The music for the game is bland and annoying, but nowhere near as much as Bubsy himself who constantly spouts one liners as you go through the levels. These one liners consist of primarily pop culture references as well as a healthy (or unhealthy) amount of puns, even the pause screen has a pun, flashing up the word ‘Paws’ in bright letters the entire time it’s paused.

As stated, the mission of the game is to grab two rocket pieces in each level and escape to the exit, however, this is not exactly easy to achieve. The jumps are annoying and a long jumping puzzle will keep you constantly frustrated, but this is truly nothing compared to the bosses. There are 2 or 3 bosses in the game and they are all awful, the first thing to do is figure out how to beat them. Since your only attack is jumping on things your best bet is to try jumping on them, however, steering a jump or a glide onto a moving enemy is a test of will and patience, and honestly you’re better off not even bothering.

Overall: You’re better off watching the YouTube videos about this one than you are actually playing it, and anyone who wants to try it will likely find themselves rage quitting by the second level. 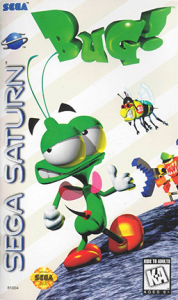 Bug! and Bug Too!

Finally, we managed to make it onto a game that doesn’t suck, in fact these two games are great. Bug! is a 3D platformer for the Sega Saturn and PC with a very interesting style, it’s almost a cross between Tomba! and Pandemonium.

The story is about a famous actor named Bug who gets a part in a Hollywood movie, in which he has to rescue his girlfriend and family from an evil spider. Each world in the game ends with you saving one of your family members.

Each level is laid out on a grid style system, where you move along different axes in a 3D space. As well as simply walking along these grids, you also walk along walls as long as they have the right flooring texture. The really interesting thing is just how much the game throws at you, each level and each area feels like it has something new for you to try to conquer, and the game just seems like the developers had so many ideas that they stuffed them into every nook and cranny.

The controls are very simple, you have a jump which is your main attack and get power ups to spit at people and zap them with lightning, as well as the standard invincibility power up. Because the game is on the Sega Saturn and you only have a D-Pad, the grid system side steps the lack of an analogue stick beautifully.

The animation is amazing as well, with each sprite of animation made from a still image of a 3D model. Because of this style the game looks almost like it was stop motion, and the characters all really look like cartoons which is just great.

The music if fine but nothing to write home about, and the main character does have one liners similar to Bubsy 3D, however these one liners are much shorter and less annoying, and don’t happen anywhere near as often.

One of the biggest shocks for me was that the game is huge and very challenging, which is surprising for such a kid friendly game. There are a lot of lives lying around which you are going to need, partially because of the challenge level and partially because there doesn’t seem to be a save system or password screen at all. Having said that, it is possible that my Saturn’s internal battery has run dry so the saves won’t work.

A final note on the first game is that there is a pimp spider who gives you access to the different bonus levels. This is not important, but it is funny.

The second game is basically the same with a few key differences. The first major one is that the game has a hub world system now between levels, instead of just being a linear progression. You also have the power to run now, which comes with possibly the best animation I have ever seen, weirdly you have also lost the power to zap people with your antennas. Finally, you can also now choose from 3 different characters to play as, which is a nice touch.

Overall: An excellent couple of games with some very unique features and interesting level design. If you love 3D platformers, you owe it to yourself to give these two a try. 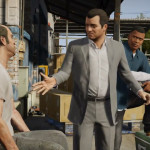 Is it time that Grand Theft Auto moved away from its USA setting? 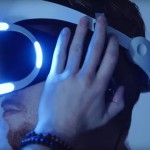 Sony Reveal they are Open to Bringing PlayStation VR to PC