Ignore the weird name, Battle Chasers: Nightwar is a force to be reckoned with. Not only is it a throwback to role-playing games of old, but it’s also an addictive romp through the fantasy world of the Battle Chasers comic book series which, admittedly, I’d never heard of until now. Its creator, Joe Maduriera, is studio lead of Nightwar’s development staff Airship Syndicate, which explains the game’s art direction. It’s ideal that you can go into Nightwar blindly, not knowing anything about the backstories or lore, as starting a new game perfectly explains everything you need to know before diving into the game’s plot. 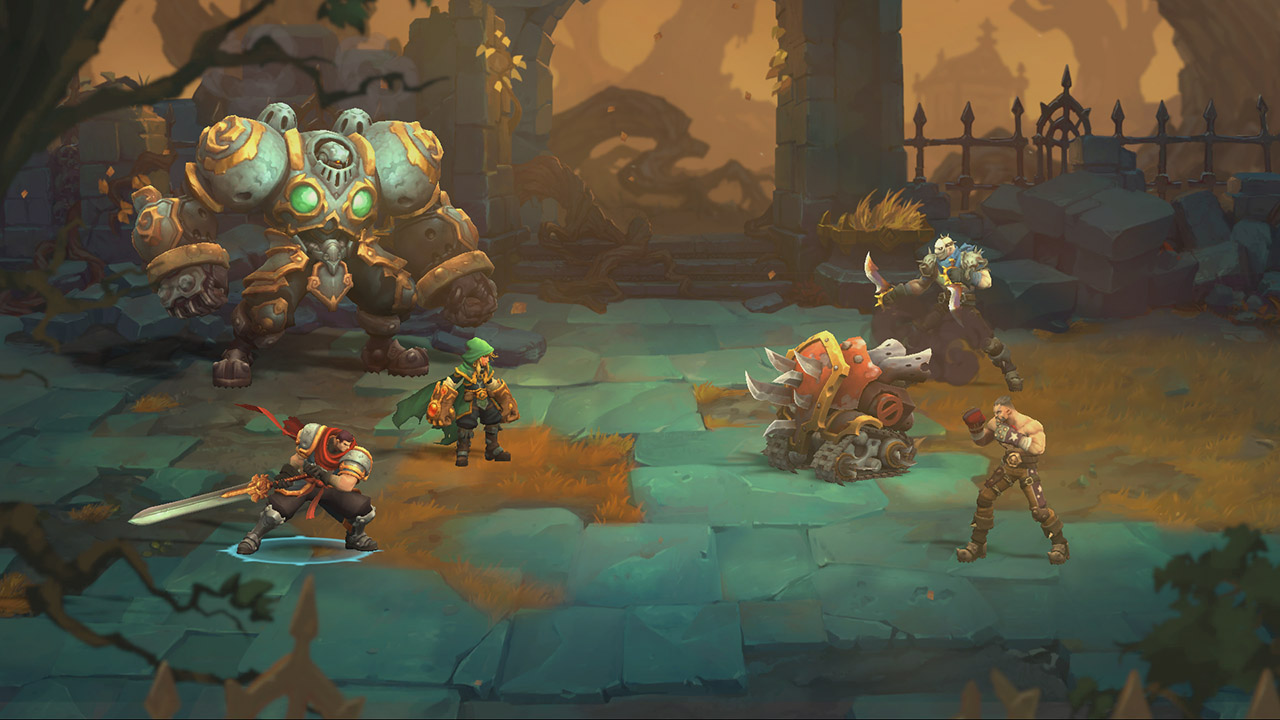 Battle Chasers: Nightwar opens with a beautifully hand-drawn cinematic depicting our main heroes’ airship being shot down, resulting in them being stranded on an unknown, mysterious island. You begin playing as Gully, a young girl who wears a pair of magical gauntlets previously owned by her missing father, whom is the main catalyst for this adventure. You soon find your companions, a mixed band of heroes who conveniently hit all the RPG tropes: Garrison, a skilled but moody swordsman, the hot-headed rogue, Red Monika, Knolan, an old but wise Mage and a powerful, huge but kind and caring mechanical war machine, Calibretto. They all fit the bill perfectly for a game set in such a fantasy-themed universe, and the dynamics and banter between them as the plot progresses is endearing to watch. It becomes clear that without even one member of the crew, the dynamic would be dramatically hindered as they each have a part to play. The antagonist, Destra, an evil sorceress akin to the likes of DC’s Enchantress in her destructive demeanour and wicked intent, is great in her role too. 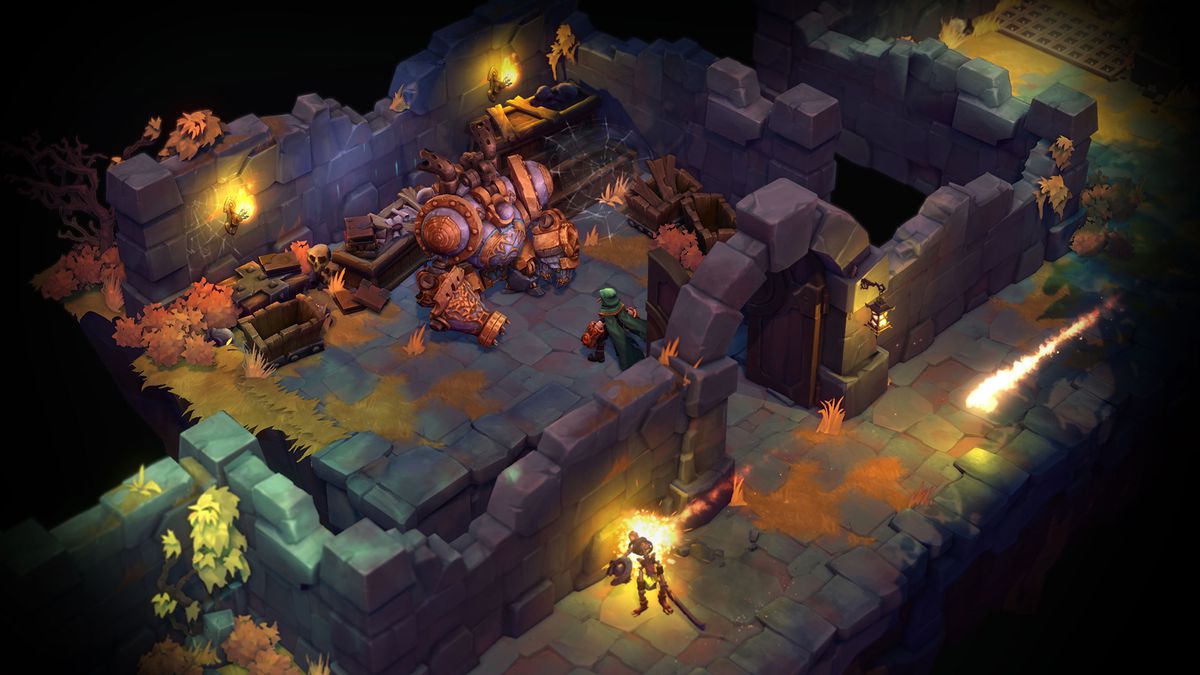 Gameplay-wise, Nightwar plays like a traditional old-school RPG. You control any member of your party as you traverse the map forcibly sticking to the paths, entering key buildings, such as inns and workshops, to trade, craft and gather information whilst also taking out enemies indicated by their logos. Important locations can be entered into, and this is where the game changes to a Diablo-esque style of play that allows you the freedom to explore whilst avoiding traps and battling enemies, which can now be seen wandering and patrolling. This change in gameplay style, which occurs throughout your adventure, makes Battle Chasers: Nightwar interesting, but then there is the combat.

Fighting enemies is a turn-based affair in the traditional sense as each party member and enemy takes turns in attacking or defending until either party is wiped out. The order of turns is displayed on the side of the screen, which helps you plan your moves carefully. Calibretto can deliver some brutal gut punches whilst also having a machine gun arm and healing abilities, Garrison uses sword slashes and flurries and Gully can use her dad’s gauntlets for some serious force-themed slams and throws. Each successful attack generates Overdrive, which fills a dedicated meter displayed on the bottom of the screen. Once filled, any character can use their own Overdrive ability which comes with it an almighty attack with a very cool animation. There’s a lot of strategy involved in the combat system as knowing what move to make and when can make the difference between success or failure, and levelling up unlocks more moves to have at your disposal, making the combat deep too. 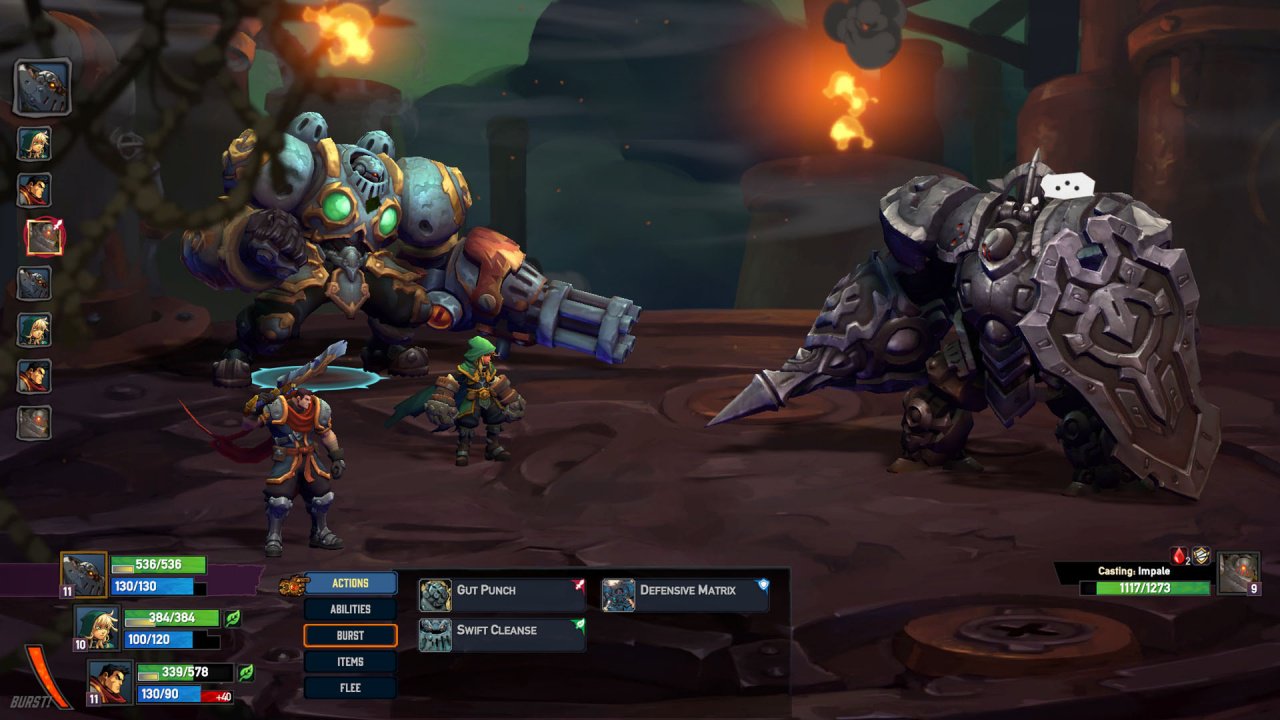 Battle Chasers: Nightwar is a beautiful game to look at with an art style very reminiscent to Torchlight, a similar style RPG. Cartoonish style character models and environments perfectly portray the comic franchise of its source material with animation that really drives home the impact of each and every attack. We have here gorgeous hand-drawn cutscenes and wonderful dialogue that sticks to the characters’ personalities, making it a joy to watch as well as play.

It’s not all fun though, a short while into the game, the difficulty spikes at such a rate that frustration may well make you question if it’s worth it. Then you realise that the fluctuating difficulty is to encourage you to grind so that you can eventually be tough enough to progress. Unfortunately, the grind becomes cumbersome, a constant annoyance of fight after fight so that you level up enough to continue the brilliant story. Sure it’s worth it, but players who are able to grin and bear it are a rare breed, especially Switch owners. Let’s face it, the majority of them are casual gamers, they won’t want to stick to a game they have barely heard of if it’s too much of a pain to proceed. The combat is fun, sure, but the fun diminishes when you’re forced to fight the same enemies time and time again until you’re strong enough to fight a different one. The bosses are cool though, I really can’t knock them. 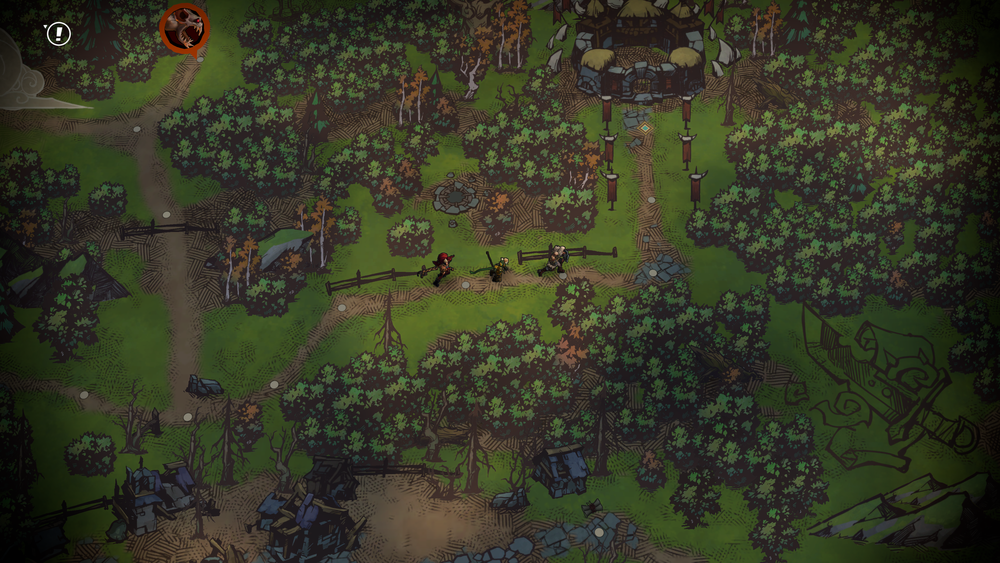 Alongside the great gameplay and deep combat, you’re able to find and create loot consisting of armour, weapons and accessories, and each have their own statistics and properties. This adds an addictive quality to Nightwar that carries over from other games such as Diablo or Torchlight, and the constant search for better gear is a strong motivation to press on.

All in all, Battle Chasers: Nightwar is a great RPG with a beautiful art style, fun gameplay and deep combat and crafting, although the difficulty spikes and focus on grinding prevents it from being a classic.

Battle Chasers: Nightwar is a beautifully crafted RPG that will trigger nostalgia thanks to its deep turn-based combat and gorgeous graphics; however, the spiking difficulty and constant grinding prevents it from being a true great. 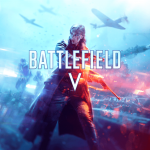