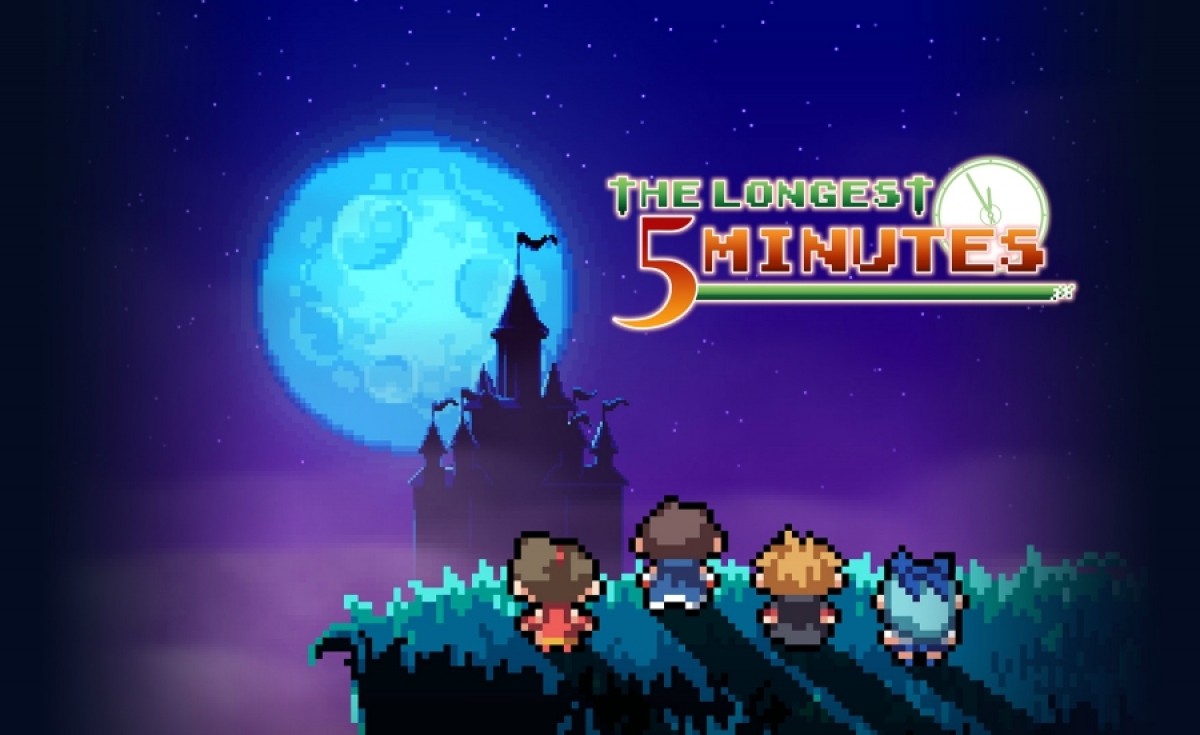 The world of video games has had a long and chequered history with amnesia. A few years ago, it was a plot device about as common as you could get, and even modern gamers have a tendency to groan as soon as they hear that dreaded three-syllable word. From Final Fantasy to Metal Gear Solid, even our most famous gaming series haven’t managed to escape this trope, and there are numerous lists of games that feature this narrative faux pas.

So, what if a game existed that went so hard on the whole ‘amnesia’ thing that it was basically the entire focus of the plot? Well, that game exists, and it is called ‘The Longest Five Minutes’….and this is a review of that game…you get the point. 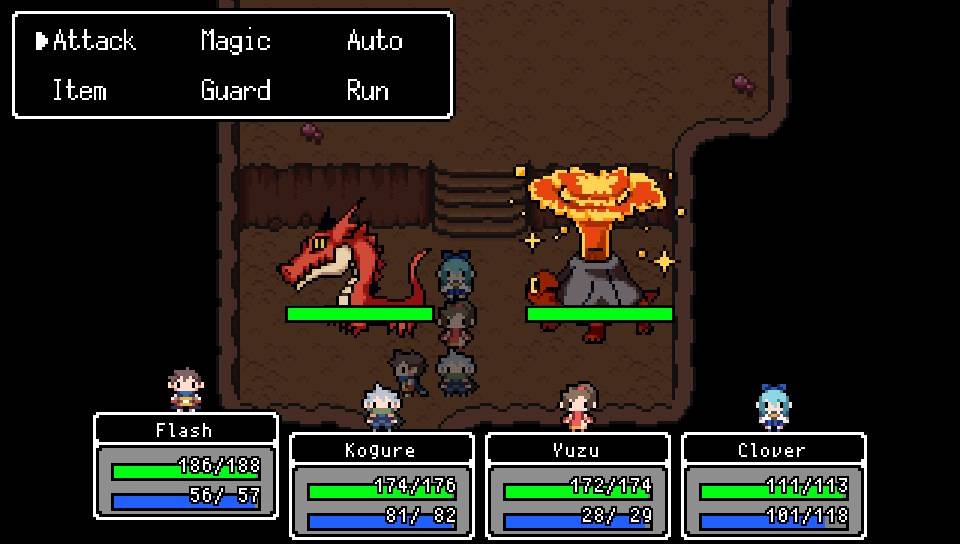 The Longest Five Minutes is a game that starts you out at the final boss of a generic fantasy JRPG. You and your three friends are facing off against a giant, fiery demon king and trying save your homeland. The only problem is that, much like the player, the main character cannot remember anything about their journey or why they’re doing what they’re doing. During the five minutes in which you battle the demon king, you must re-journey through all your memories to discover your motivations and find the power that will let you defeat the boss. So, basically you have to journey through a JRPG piece by piece as the final boss keeps flashing back in to taunt you or to do some random damage to one of your fighters. The gameplay is about as worn out as you can get, following a very simple Final Fantasy/Phantasy Star model. You control 4 characters, each with their own magic types/abilities, by navigating through menus to select an attack for each of them. Then each character and enemy performs their abilities, and you start over from the top again. 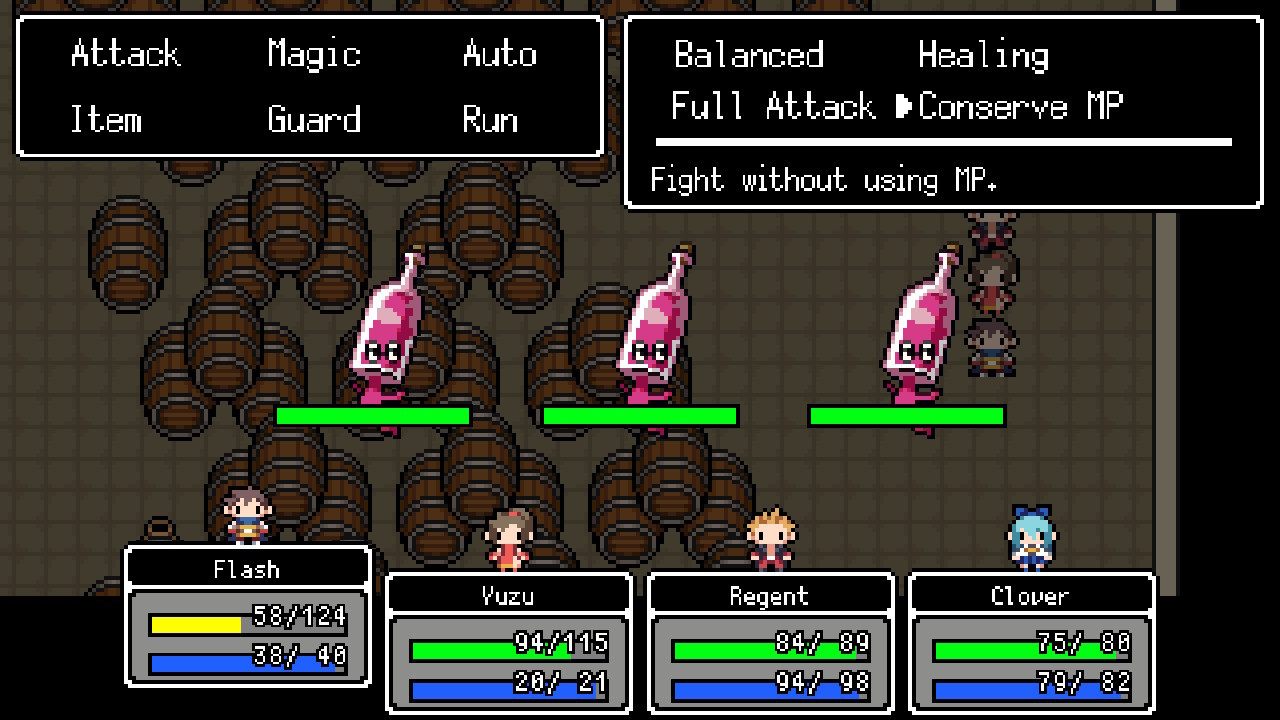 Almost every single mechanic that the game employs has been done elsewhere and done better. That is not to say that they’re done badly here, but every feature in The Longest Five Minutes has been taken from other games that have been around since the late 80s, and there is nothing as jarring as a job system to mix things up a little. The characters all have different ‘elemental’-themed magic abilities that come in several flavours, such as lightning, ice, fire, etc. Some characters do more physical damage, some do more magical damage, some can heal better and some are a combo of all of these features. As you follow through the story, you must journey across the land, traipsing through uninspired dungeons, fighting uninspired random battles and generally having a hell of a dull time with it. You go through several different towns and dungeons just trying to recall your motivations for your adventure or rescue random people, sometimes accomplishing other side-missions for extra experience points. As you go through each individual flashback, you gain a certain RPG level automatically, but you can gain ‘memory’ experience to add on top of it by fighting monsters and gaining XP.

The issue is that this does have a tendency to make the game incredibly easy. You can breeze through almost every single fight without having to level for it, and in most cases you don’t even have to try. For normal enemies, just attacking them works fine; for the bosses, you hit them with every magic attack you’ve got. This is the strategy that will win the entire game for you.

Despite everything that has been said thus far, it is important to note that the game does have one single piece of innovation which we genuinely hope makes it into other games like this. When you open your menu, you can tap a single button that uses one character’s MP to automatically heal the HP and status ailments of each character in your party. This is so incredibly convenient that it makes almost all of the random battles feel like they pretty much don’t exist. Of course, it also adds to the feeling that the game is on auto-pilot and that you can completely blitz through everything without having to try, but it is at least a nice feature. 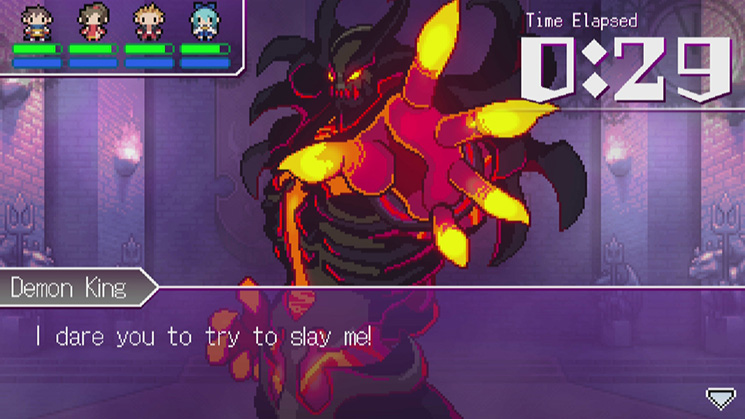 Okay so the gameplay, character design and enemies are all incredibly boring and generic, but that’s not why this game exists, right? Clearly, it is trying to tell an interesting story in a strange manner that hasn’t been done before. Well, there is a bit of a problem with that statement. While it is entirely possible that the creators of the game intended for the story to be engaging and to be told in a unique way, it really didn’t worked out in the end. When it is at first described to you, the plot might seem like it’s unique and creative, but it really isn’t anything new or special. The plot is generic. You have to defeat the demon king to stop him from turning everyone into demons. This would be fine if the narrative framing device was interesting, but lots of other games have started at the final boss and then flashed back to earlier in the story. It’s been done a thousand times, and the only real key difference here is the fact that the story keeps swapping back to the final boss every few minutes to further the fight. This story feature only managed to provide the game with a sense of poor pacing and narrative whiplash to the point where it almost starts to physically hurt.

It is possible that the characters are supposed to be the real draw here. You’re supposed to become invested in their personalities and interpersonal relationships with one another. The issue with this is that you’ve probably seen these characters many times before, especially if you’ve seen any anime ever made. There is the lusty, idiotic boy who is perverted to the point of being a little bit disturbed. There is the hot-headed girl who is a martial artist and “ain’t gonna take non o’ your shtick, mister!”. There is the ‘innocent’ girl who just wishes everyone could be nice to one another, and finally there is the blank slate main character who is as blandly heroic as possible and whose personality changes only the minutest of amounts when you make the few choices that you possibly can throughout the game. 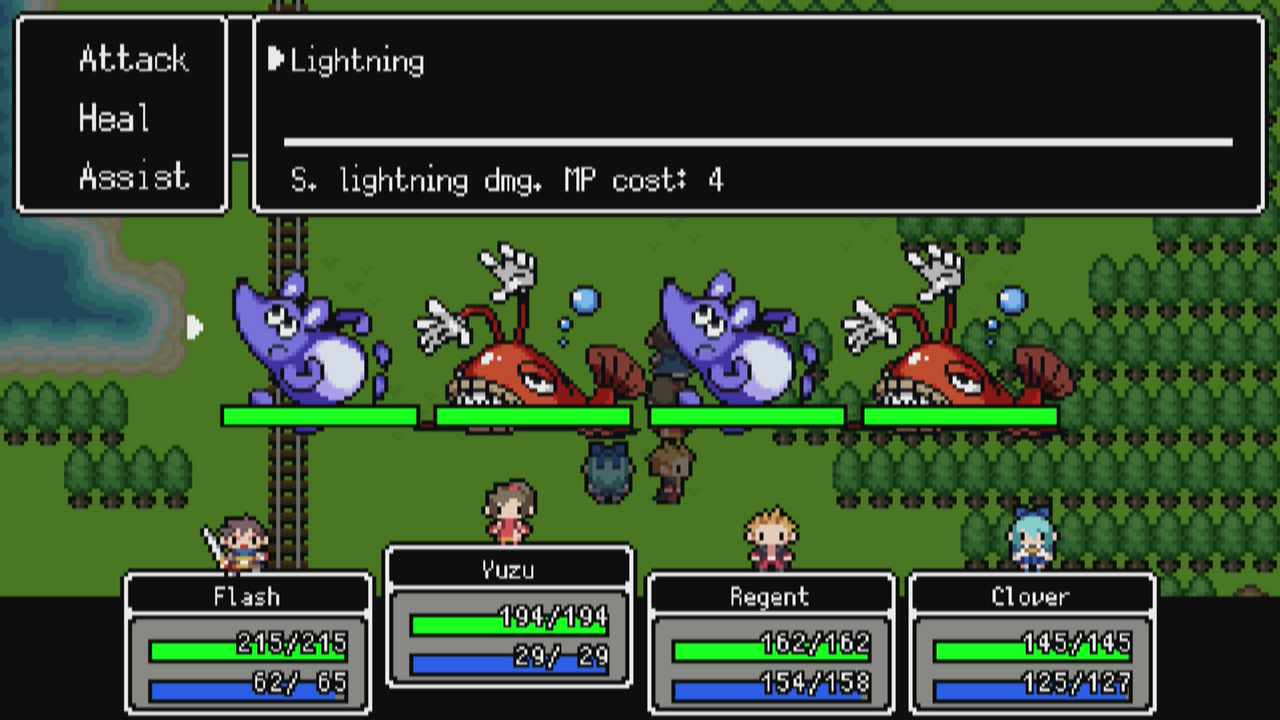 This title feels like it is the first game someone has ever made, and almost everything about it is completely forgettable. There are interesting ideas to be found here, but they are buried beneath layer upon layer of deeply rooted genre clichés. The characters fail to be interesting, as does the story and gameplay, and you’re likely to have entirely forgotten that you ever played this game a few weeks after you either finish it or fall asleep while playing it. 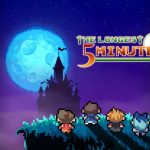 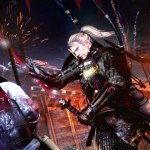 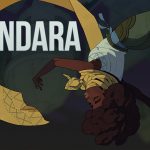