Though I used to enjoy playing the scrolling shoot ‘em ups that dominated the gaming scene in the late 1980s and early 1990s, I always found them quite tough and usually sucked at the boss fights. Oh yeah, and some of them used to be pretty hard going on the old thumbs if you didn’t have a decent autofire solution. So I had mixed feelings when I was asked to review Tesseract Interactive’s Excubitor. Fortunately, I rather enjoyed its slick and intelligent blend of bullet-hell arcade action and tower-defense strategy elements.

Set in 2182 in a remote star system colonised for the purpose of mining voidshard crystals, Excubitor begins when the GRB Antares responds to a distress call from Isigura Station on the planet Farris. It seems that Svarog Tech’s automated military defence drones have gone bonkers and turned on the colonists. As the pilot of the Antares’ sole combat escort, the SST-77 Hammerhead, it’s up to you to protect them and find out what went wrong.

Broken down into a series of discrete RTS-style missions, the bulk of the gamplay revolves around defending the Antares from a set number of increasingly difficult enemy waves. But don’t be fooled by the Starcraft-esque interface and visuals, Excubitor is primarily a shmup. The main way of dealing with incoming threats is by directly intercepting and destroying them with your fighter, preferably before they’re within firing range of the base ship, which has limited defensive capabilities and health. 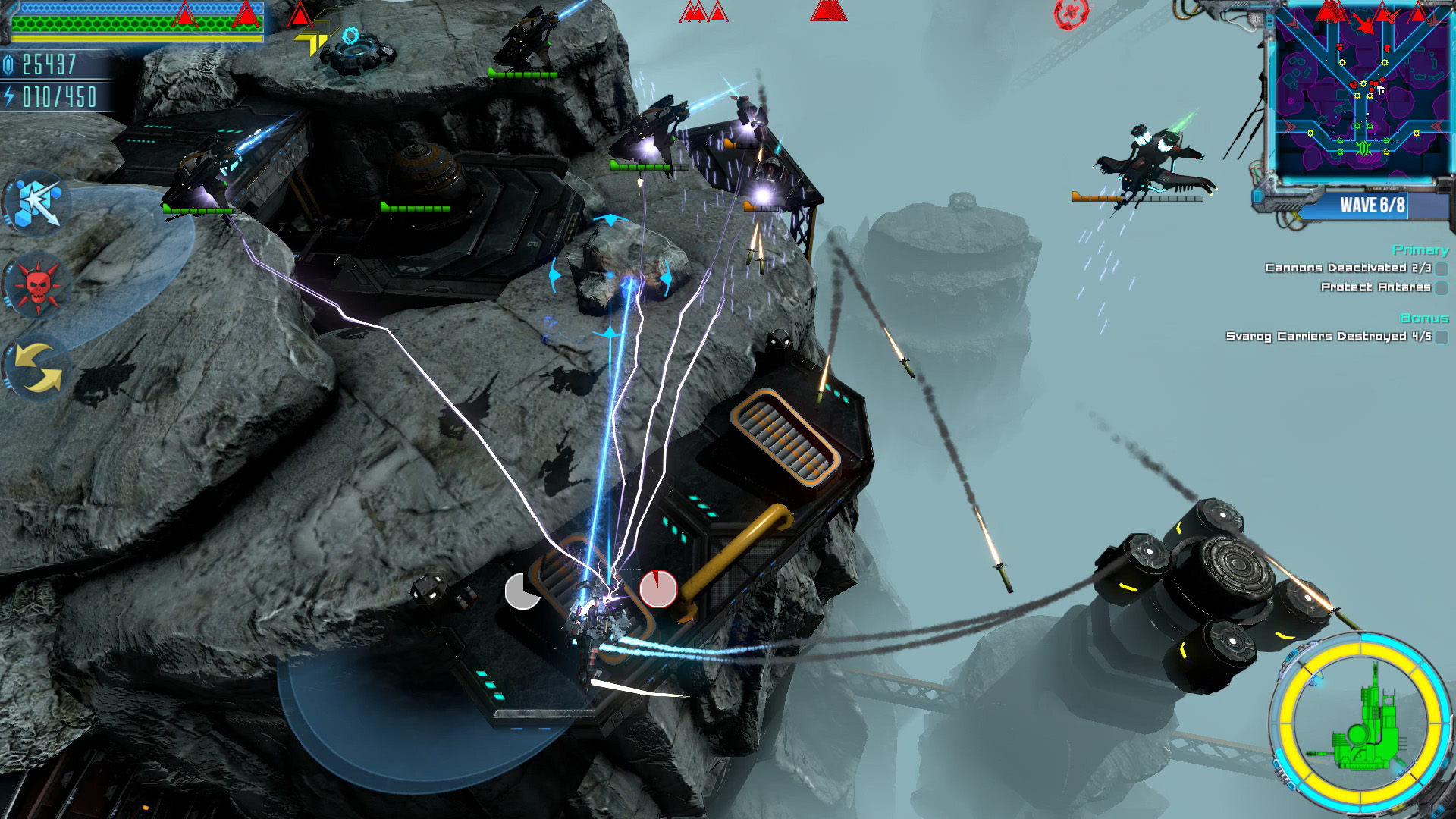 Luckily, the Hammerhead is a serious bit of kit and an absolute pleasure to fly. Piloted using the WASD keys (or a gamepad if you prefer), it’s fast, agile, and responsive. The shift key allows you to quickly strafe in four directions, space provides a temporary speed boost, and the mouse allows for precision aiming of the dual weapon systems, each triggered individually with a separate button. And boasting heavy armour and regenerating shields, the Hammerhead is more than capable of dealing with being heavily outnumbered. Not that dying is a massive problem, as you respawn almost instantly back at the Antares.

As you work your way through the missions, the Hammerhead only gets stronger. You’ll earn voidshards that can be spent on buying and upgrading new weapons, of which there are quite a few to select from. And “modules” will be awarded that can be used to improve your shields, armour, engines, and weapons, as well as unlock new abilities. These include things like being able to unleash a large shockwave that neutralises all incoming projectiles or to carry a second pair of weapons. A nice touch is being able to test out different gun pairings and upgrade combinations in the Antares’ simulation chamber prior to committing (there’s also an optional tutorial that introduces the core gameplay mechanics). 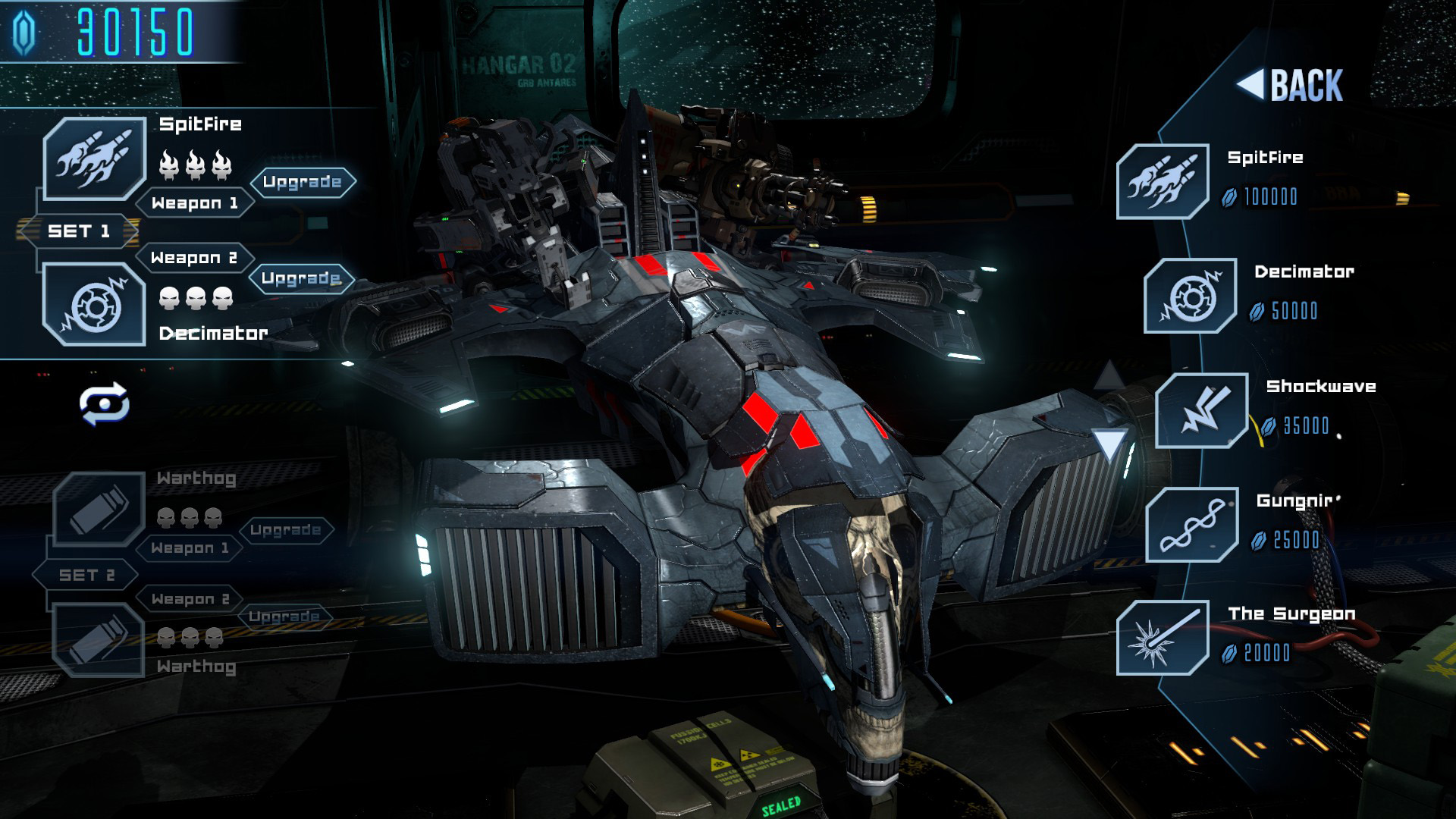 Where the trouble lies is that you simply can’t be everywhere at once. The misanthropic drones spawn thick and fast from multiple entry points around the maps, while additional objectives frequently require you to attack or defend other structures, often some distance from the Antares. And this is where the strategy layer comes into play.

Dotted around the maps are a handful of platforms that turrets can be placed upon. However, each requires an allocation of power, restricting the total number that can be built. So, your placement needs to be carefully considered. Ideally, you want turrets to cover two or more routes into your base or to defend locations that you won’t be able to get to quickly.

Turrets come in a wide variety, each with their own pros and cons, though they’re not all available at first. Generally, the more effective they are, the larger the power cost, but not all of them deal damage. EMP batteries temporarily disable enemy weapons, the cryo variant impedes their movement, and repair stations gradually mend the Hammerhead when nearby. Individual turrets can also be upgraded to increase effectiveness, but as you’d expect, this requires extra juice. However, generators can be purchased with voidshards to increase your power quota, and turrets can be dismantled and repositioned. Curiously, the drones never attack your turrets. Probably for the best though, as you have enough to worry about without also having to repair or replace your defences. 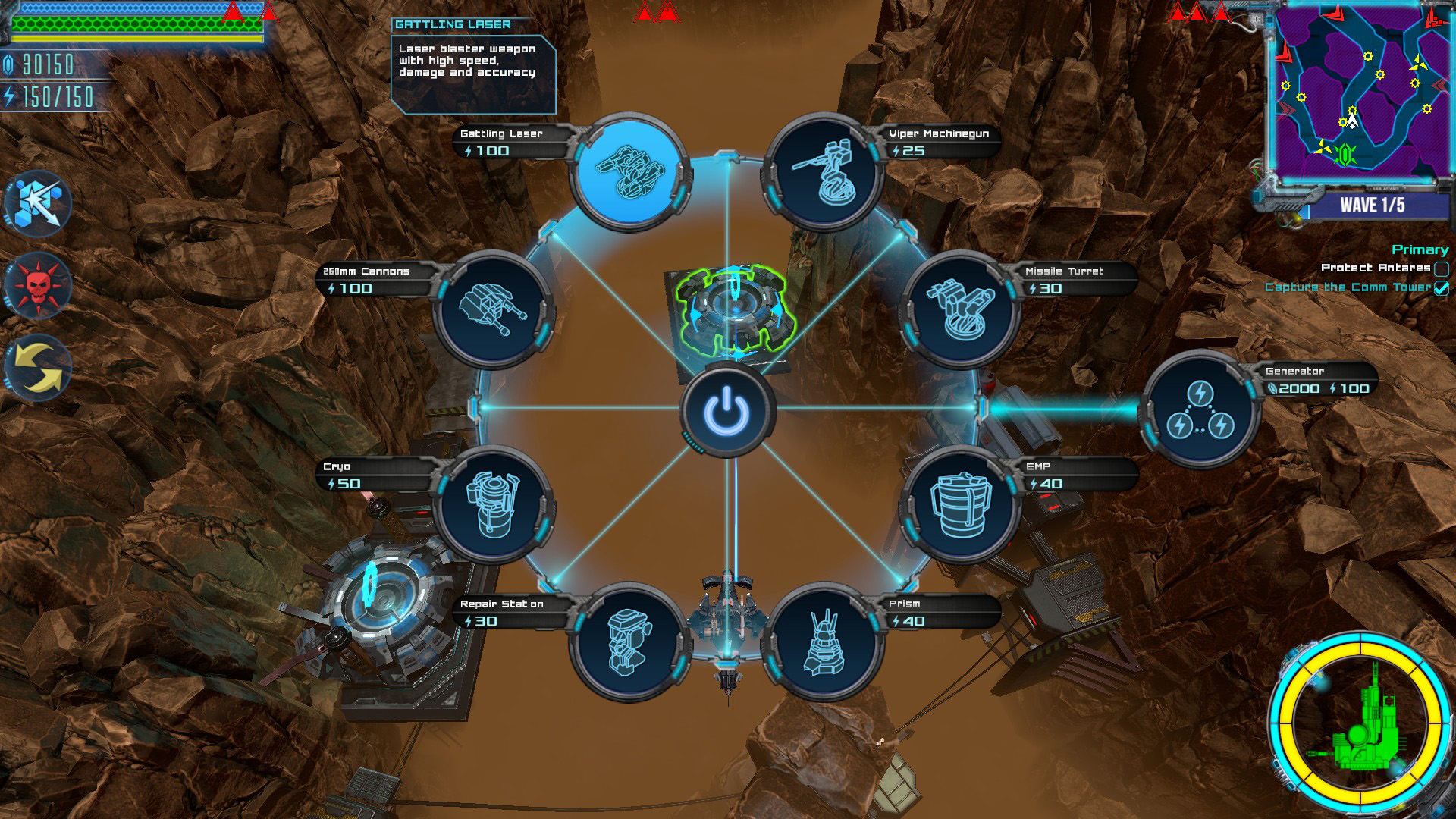 Be under no illusions, this is a challenging game, with the tougher difficulties placing an increased emphasis on your pairing of ship weapons and choice of turret placement, as well as skill in piloting the Hammerhead. Not only do you have to manage your static defences efficiently and put respites between waves to good use, but you need to monitor the mini-map constantly and prioritise threats accordingly. Enemies come in all sizes and flavours, including heavy tanks and mechs, speedy fighters, huge gunships, and lovable suicide drones. So, it’s important to recognise and react first to those that can cause you and the Antares most harm.

Many missions will require several attempts before you devise a viable strategy, especially the boss fights which occur on every fourth mission. In these, not only do you have to contend with a huge and formidable foe, sporting multiple oversized guns and a well protected Achilles heel, but frequent hordes of drones attacking you and the Antares. Though while the difficulty can sometimes frustrate, the balance is generally just about right, and it’s a rewarding experience when you finally nail your tactics and finish a level.

There are a total of 12 missions spread over four planets, with a variety of environments and objectives to keep things fresh. You’ll encounter oceans, canyons, orbital platforms, sky cities, and volcanic landscapes, all furnished with an abundance of minute and dynamic detail that brings the worlds to life. In certain scenarios the Antares will relocate at regular intervals, others will require you to destroy mech assembly plants to lessen the enemy assault or activate shields when necessary to protect buildings from devastating bombardments. Furthermore, some terrains provide unique defensive opportunities, such as physical choke points or objects that can be activated to temporarily close off pathways. 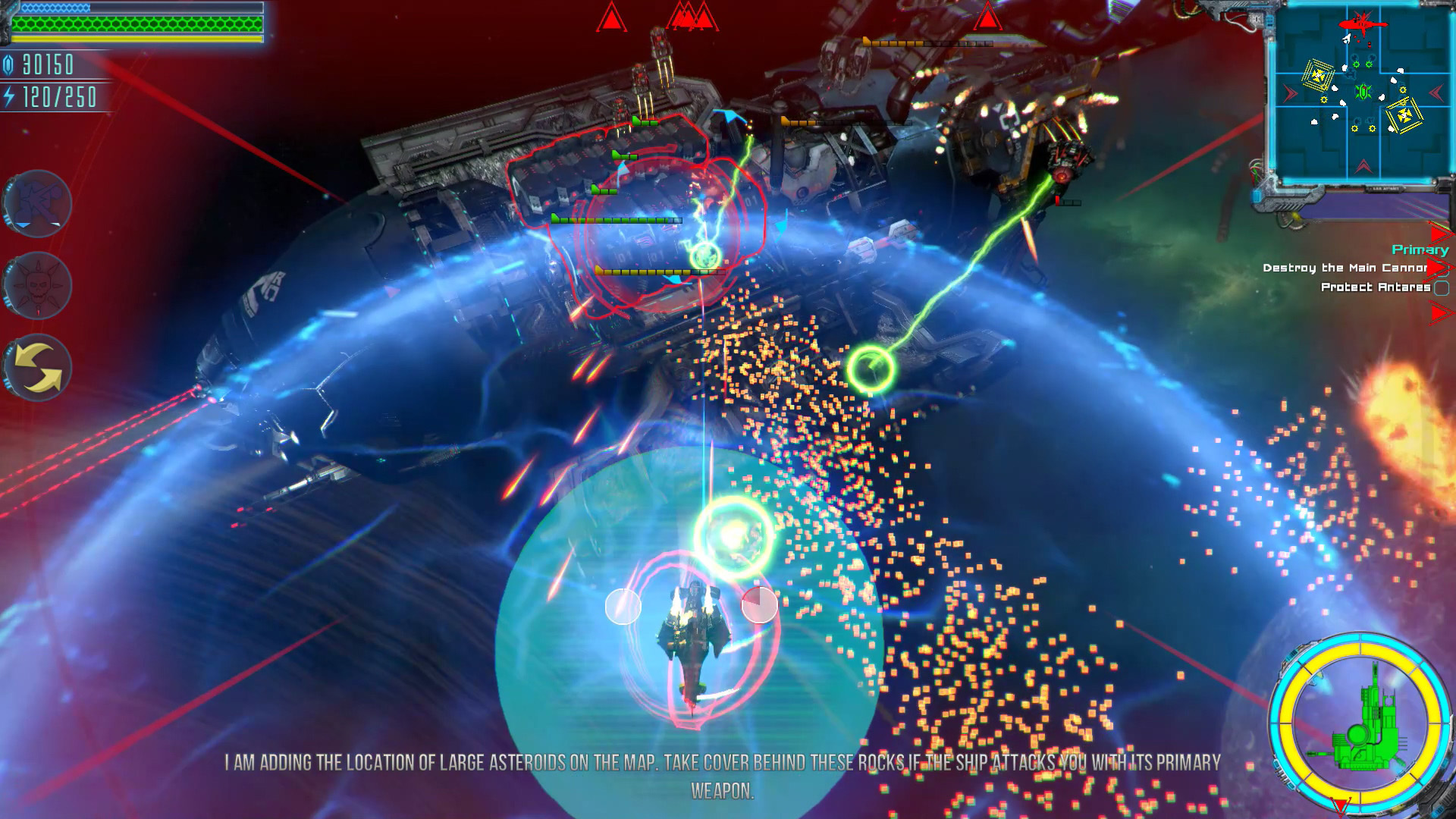 There’s also a fair bit of replay valuable to be had. There are three difficulty settings, which you can switch between at any time, and you receive a rating and score for each mission you complete. No doubt the perfectionists will find themselves needing to revisit each map to achieve that elusive gold rating and perfect score.

As an added bonus, completing the game unlocks “new game+”, which is a fourth difficulty known as “extreme”. The catch is you restart from the beginning but get to keep all weapons, turrets, and upgrades. Plus, you gain access to the previously unavailable spitfire machine guns, and you can continue to upgrade the Hammerhead even further. Be warned though, it is pretty tough and will really put your skill and tactics to the test. Big wuss that I am, I’m currently stuck on the first boss fight (i.e. the fourth level).

To be honest, I didn’t really get on with the narrative, which is primarily delivered through the mission briefing screens and the occasional pretty to look at but not really that interesting arcade-style cutscene. It all felt like a lot of superfluous flavour text that had little bearing on the proceedings. After a while, I simply stopped reading it. My only other real complaint is that it would be nice to have an option where the mini-map rotates relative to the Hammerhead, as I occasionally found it a little disorienting when trying to navigate the maps during some of the more intense moments. 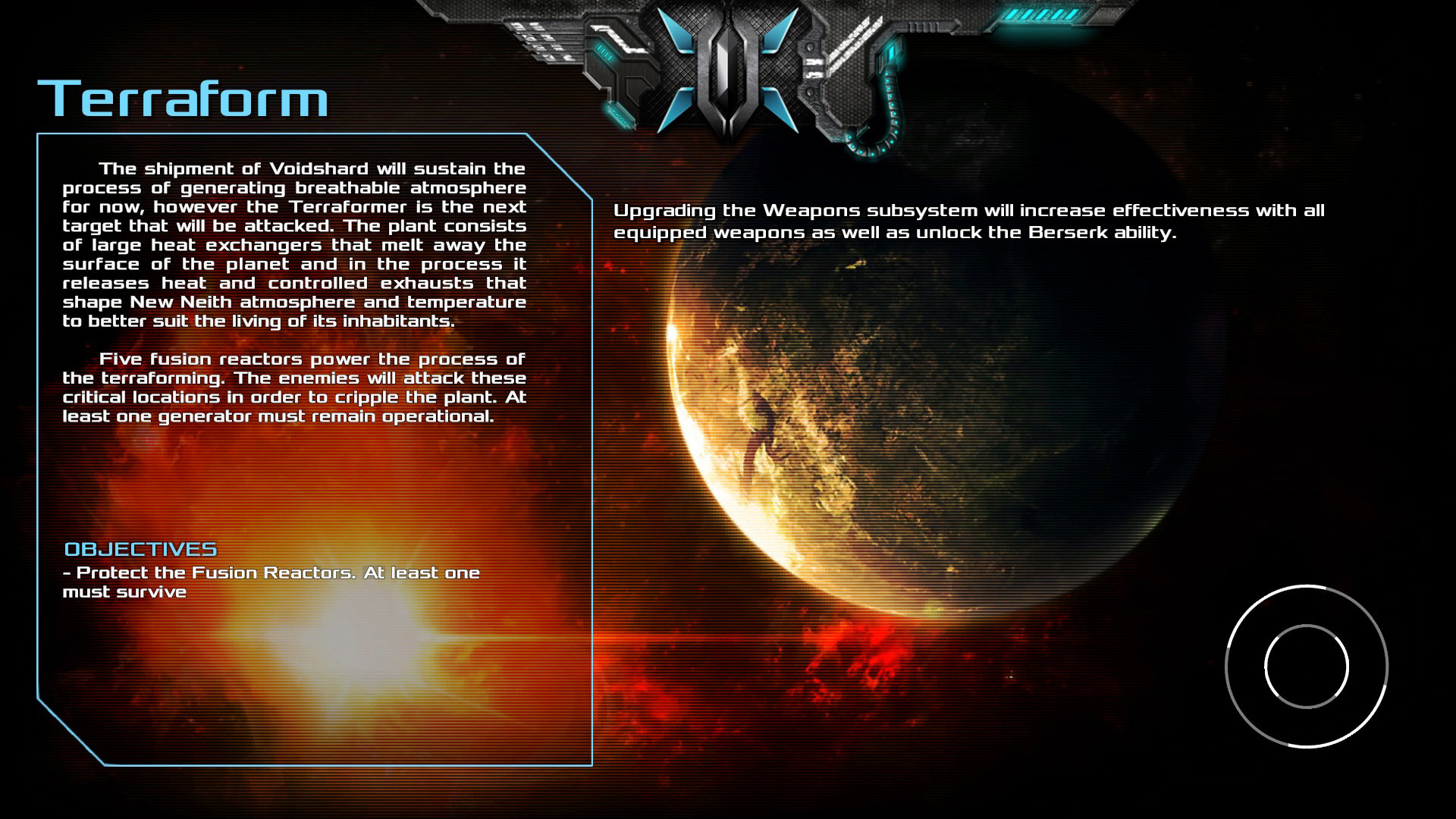 Despite my initial misgivings, I really enjoyed Excubitor. It’s balanced, challenging, and well thought out. And it manages to capture the fun, feel, and excitement of the vintage shumps, without the gameplay being overly dependent on memorising endless ship formations and bullet patterns. It also looks and sounds great, featuring appropriately arcadey projectiles, visual effects, and pew pewy gun noises. Hell, I even appreciated the boss fights, and the RSI was kept to a minimum.