If I had to devise a list of my top 10 all-time favourite games, then UFO: Enemy Unknown (aka XCOM: UFO Defense) would undoubtedly be somewhere near the top. Originally released in 1994 for PC and Amiga, it’s arguably one of the greatest strategy games ever made and has rarely been matched since in scope or vision. So naturally, I was very excited when Sid Meier’s Firaxis Games launched the remake XCOM in 2012. Yet, while a decent enough game and clearly a loving tribute to Julian Gollop’s masterpiece, I was ultimately left wanting.

Yes, the cover/flanking system was a very nice addition, as was the introduction of classes and individual soldier abilities, and they livened up the game with modern graphics and sound, a dynamic third-person action camera, and the ability to customise the look of your soldiers. Yet at the same time, they also managed to strip away much of the complexity. OK, so the original was a little too bent on micromanagement and Firaxis’ streamlining does get you into the action quicker, but the meta-game was mostly reduced to churning out satellites, the turn-based combat to overwatch creep, and overall it was by far too easy, even on the harder difficulties. It didn’t even have procedural maps! For a game made almost 20 years after the original, it didn’t feel like much of a step forwards. 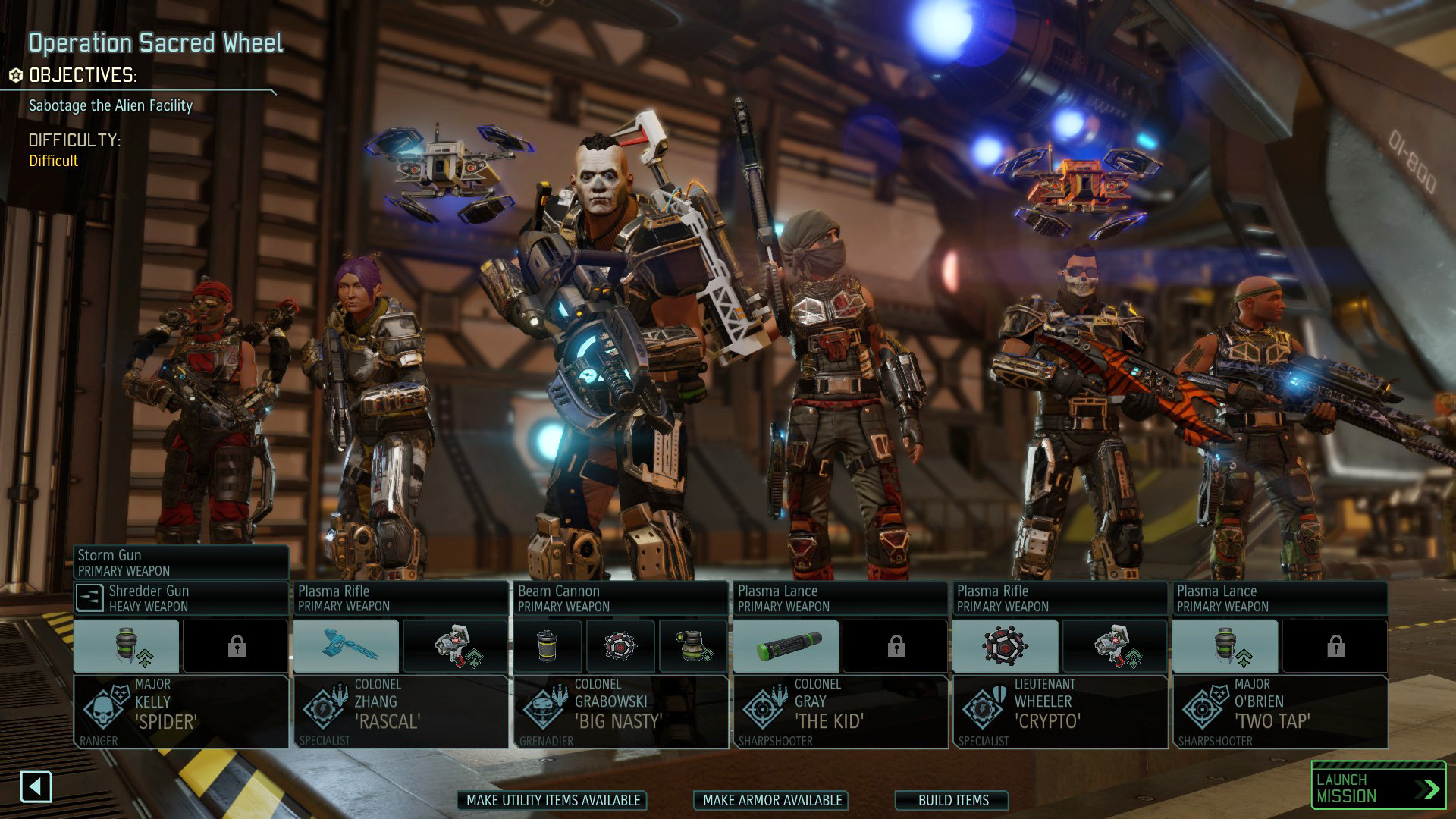 Then along comes XCOM 2. I honestly wasn’t going to bother, but then I heard lots of good stuff about expanded mechanics and greater depth, so again I got excited and jumped on board. So did Firaxis manage to nail it this time?

Well, XCOM 2 is essentially more of the same. Though in something of a role reversal, the sequel now sees you masterminding an insurgency. Yes, apparently the first game was just a dream or something – the XCOM defence force was actually defeated, and for the past 20 years the Earth has been ruled over by a human-alien coalition known as ADVENT. During this period the aliens have been busy erecting shiny, futuristic cities, placating the masses with gene therapy and delicious burgers (soylent green?), while subduing anyone questioning their supreme benevolence with an army of alien-human hybrids who all look like Robocop. Oh, and Central Officer Bradford has transmogrified into an embarrassing parody of Splinter Cell’s Sam Fisher. 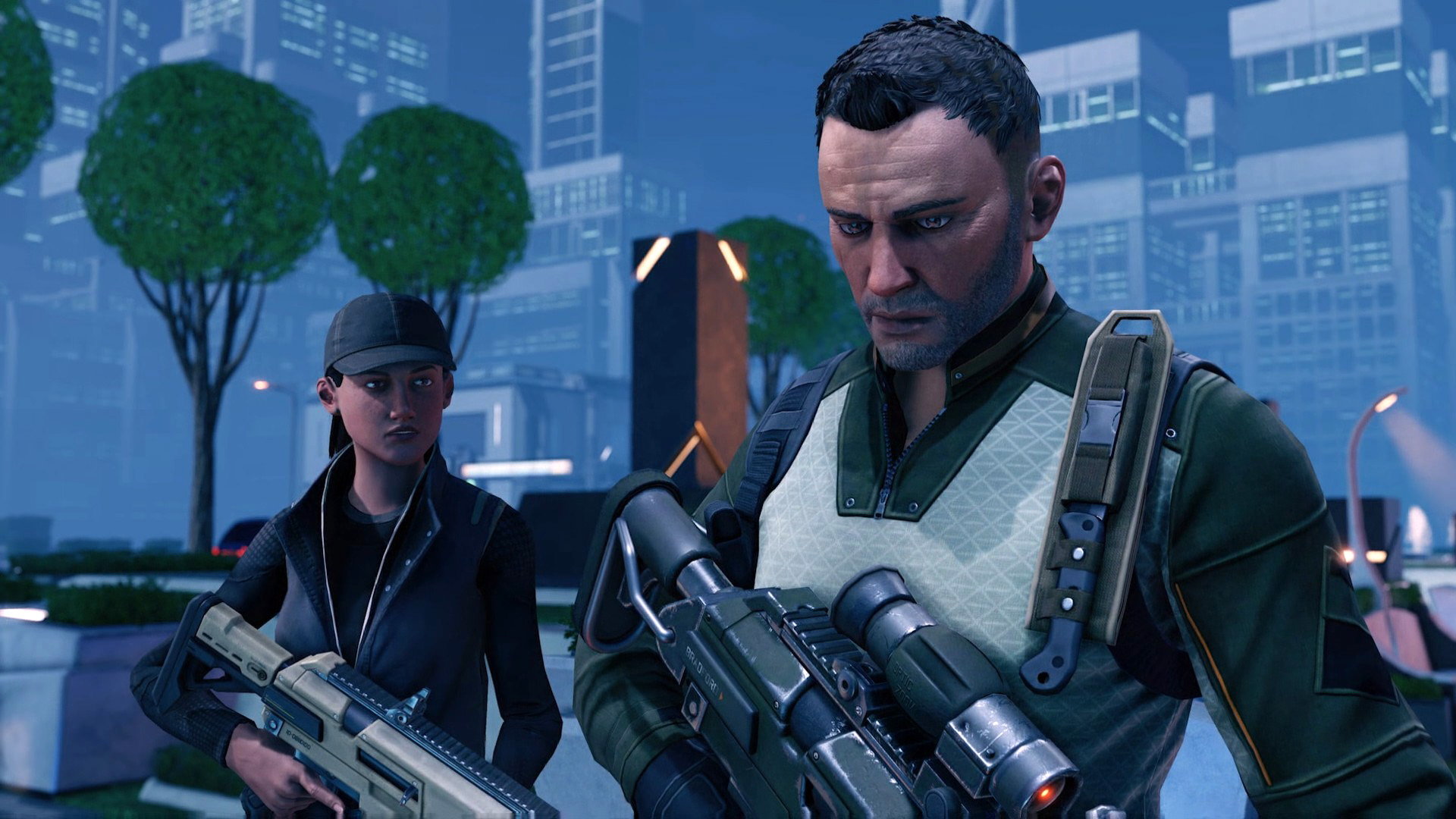 Plot aside, the core mechanics remain largely unchanged, and it will feel very familiar to anyone who’s played the first title. When you’re not fighting the aliens during the turn-based combat missions, you’ll be back at your base managing resources, carrying out research, upgrading the troops, and constructing new facilities. The missions themselves, aside from the absence of shot down UFOs, don’t deviate too much from those set out in the previous game and its expansions. However, Firaxis have made some changes to freshen up the formula, as well as attempting to address some of XCOM 1′s failings.

On the management side, you’re now up against the clock. Always up to no good, those pesky aliens are working on something nefarious known as the AVATAR project, its completion meaning game over for you and mankind. As such, it frames the majority of the decisions you’ll make at the strategy layer and adds a welcome sense of urgency. Crucially, in order to buy enough breathing space for your own endgame, you need to complete specific missions to reduce the ever-looming AVATAR counter.

However, these can only be attempted if you’ve first made contact with the local resistance cells in the relevant territory, and the Avenger (your mobile base of operations) can’t be everywhere at once. So, you’ll need to prioritise between heading out to collect vital resources such as supplies (the game’s currency) and personnel or unlocking new regions. Contacting regions is also essential as it increases your monthly income as well as the chances of resources appearing on the map. AVATAR is certainly an improvement over the crank-em-out-or-eventually-lose-the-game satellite mechanic it replaces, but instead of uplink facilities and satellites, the meta-game now mostly boils down to comm facilities and making new contacts. 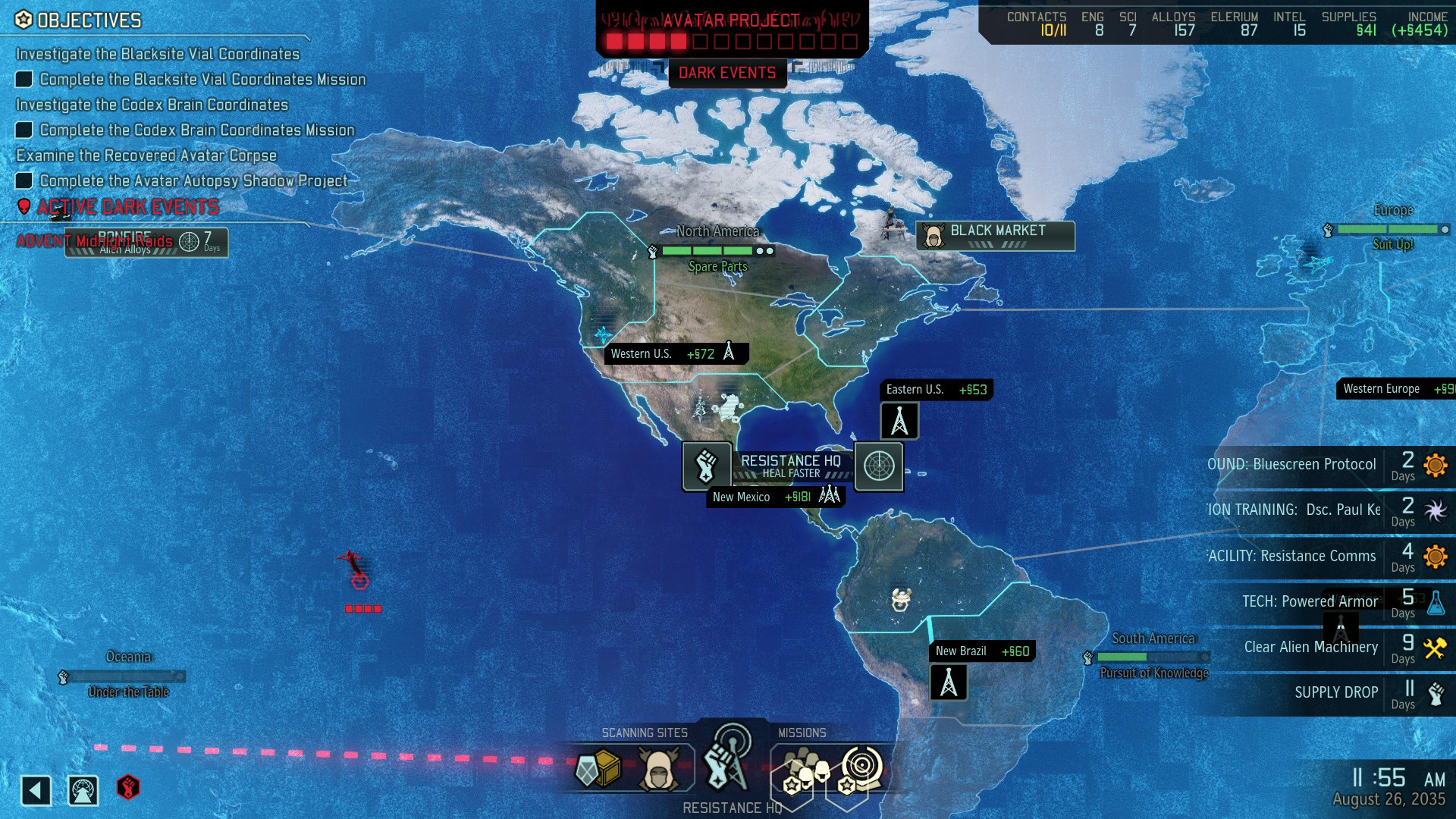 In terms of the turn-based combat, things do feel a little livelier and more tactical than previously. Being a guerilla force, you frequently begin missions in “concealment”, so the aliens won’t know you’re there until you open fire or walk into their visual range. Add in to the mixture a retweaked overwatch that now also lets your units take reaction shots within your own turn, and you’ve got a great way to set up ambushes. Plus, this also provides a partial countermeasure for the return of the god awful “pod discovery” mechanic, where a previously unseen (and seemingly inactive) trio of aliens suddenly come into play and scatter to cover because a squaddie happened to step one tile too far.

They’ve also slightly rejigged the class system. There’s less redundancy, plus character progression allows for more specialised builds. For instance, the specialist can be trained as either a field medic or a hacker, very handy for dealing with mech units and turrets. Or rangers, with their powerful sword attacks, can be built around stealth or lethal close-range combat abilities. Feeding into this, there’s a greater range of options for outfitting your boys and gals (acid and incendiary munitions ftw!), providing you with more freedom to customise squads to your playstyle and tactics.

And I’m very pleased to see the implementation of procedural maps, which look great (you can’t fault the attention to detail) and hugely increase the replay value. Plus, the vastly expanded destructibility such as now being able to start fires and destroy floors/roofs ramps up the fun factor, but also provides additional tactical options such as area denial and cover annihilation. 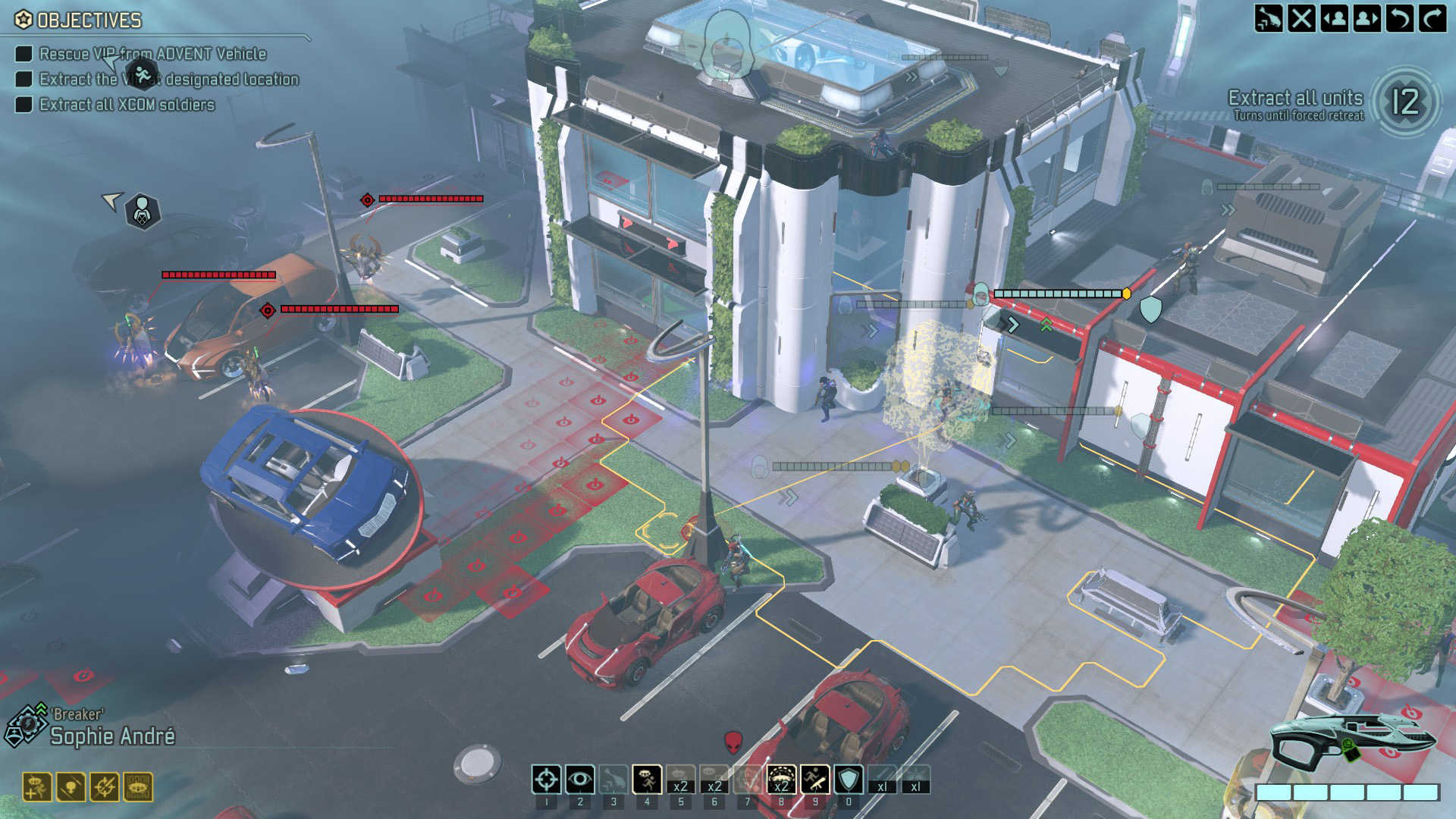 But the biggest game changer by far is the heavy employment of timed missions. This really forces you out of your comfort zone, making the game more challenging. Suddenly you can no longer afford to play passively, and taking big risks becomes somewhat mandatory, which generates some great stories to regale to your nerdy mates with down at the pub. Irritatingly, it doesn’t always make sense within the context of the game world. If the aliens don’t know I’m there, why would they have rigged their own gear to explode in eight turns?

And while the timers do put to bed the overwatch creep of XCOM 1, I can’t help but feel that this conveniently glosses over one of the game’s other major issues, i.e., the AI is still pretty crap. Enemy troops frequently walk straight through patches of fire/acid/poison, regularly fail to take advantage of the high ground, and will completely expose themselves for no good reason (like when they stop one tile short of you without attacking). There aren’t too many great battles of wits to be had here, and I’m not convinced that the AI ever has any sort of game plan.

Indeed, like the first game, the challenge largely derives from the aliens’ numerical superiority, their massive health and armour, and the exploitive nature of the pod discovery mechanic. Yet, instead of enhancing the intelligence of your opponent, increasing the difficulty level mostly confers economic and combat penalties on you while buffing the aliens’ health and numbers. It feels very artificial. And as with its predecessor, XCOM 2 fails to get the balance right. Early on the game is very testing, but once you get some decent upgrades for your soldiers, it all becomes something of a cakewalk and quickly gets boring. 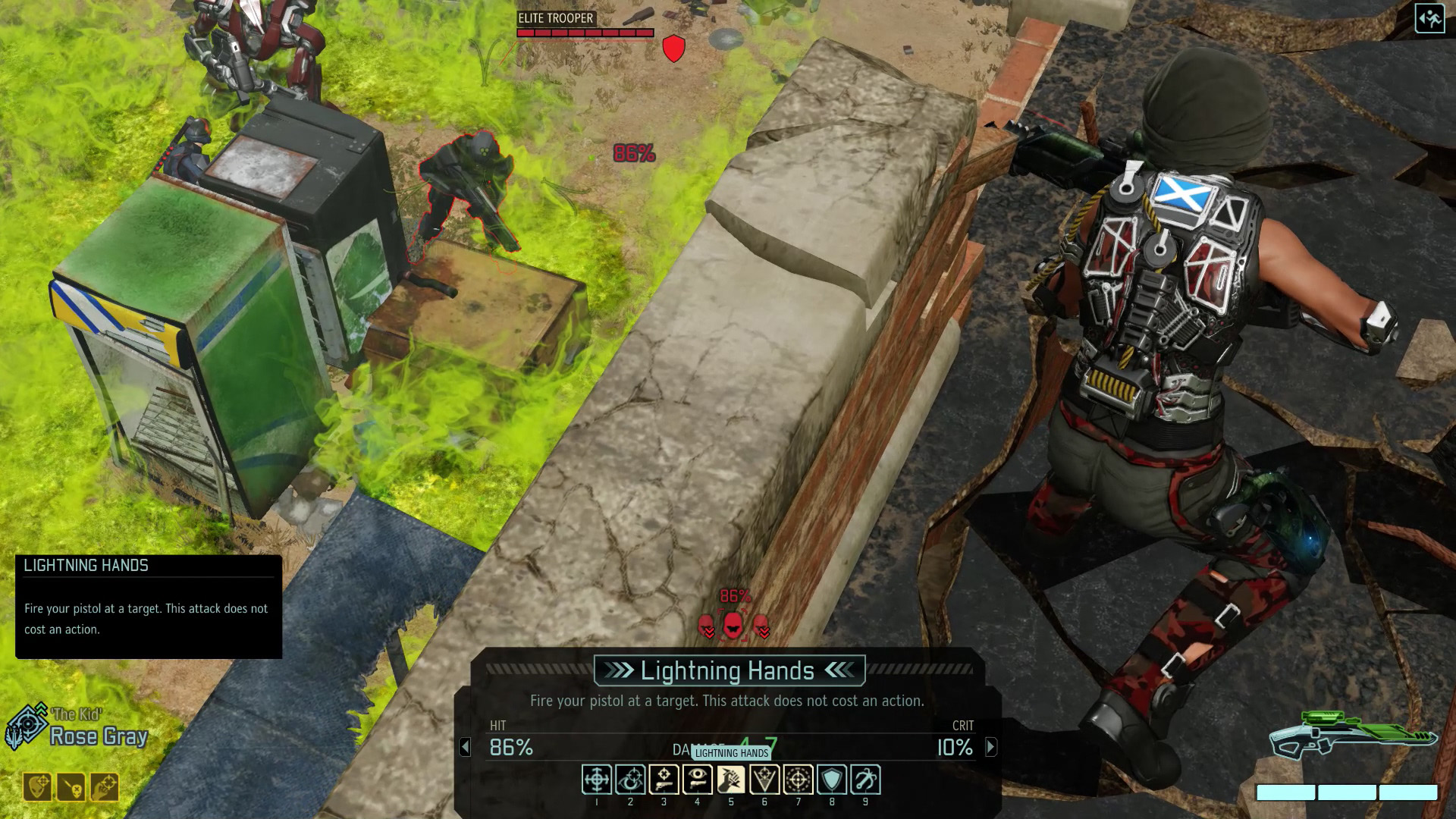 Ultimately, XCOM 2 is a moderately good strategy game that occasionally shines. And while it does address some of the failings of its predecessor, it’s still not a great game and is certainly not deserving of all the hype. Primarily, there’s a frustrating lack of depth once you scratch below the surface. The strategy layer is shallow and extremely linear, the AI woeful, the overall balance poor, and there’s an over reliance on timer mechanics to heighten the tension and increase the challenge.

On top of this, the plot is trite and full of more holes than a gunned-down Swiss cheese, the characters are annoying cliches (I’m looking at you Lily “self-confident but sensitive rock-chick techy genius” Shen), much of the dialogue is awful, and the music is insipid. And it needs to be mentioned that XCOM 2 is currently a buggy mess (which makes the ironman mode fun) and very poorly optimised, with high-end systems struggling with low framerates, stutter, micropauses, and long load times, something that’s been well documented on the internet and simply not acceptable for a full-release game. Hilariously, Firaxis claim to have been unaware of these issues prior to launch.

Once again, it feels like another wasted opportunity and surely the massive buzz surrounding the XCOM games is a reflection of how desperately the gaming community is crying out for a worthy strategy title. Sad times, indeed. Well, for me I guess, it’s back to playing the original UFO: Enemy Unknown, and perhaps I’ll finally get around to checking out its indie spiritual successor, Xeronauts.

XCOM 2 performs okay on PS4 and Xbox One with the only slowdown happening during loading sequences. Graphics are something of a concern, however. They are generally great with a clear cut improvement over the first game, but there are noticeable problems. Firstly, dead enemies turn a lot more lively after death than they were whilst alive and kicking. Corpses jolt and jitter so much it looks like they are having some sort of afterlife rave. Whilst hilarious, it is distracting.

Secondly, at times, members of my team were invisible apart from their limbs and head. It was unsightly to say the least, and it happened too often for my liking.

The controls on console are easy to learn. With the left stick controlling an on screen cursor to direct your troops with the shoulder buttons using abilities and weapons. A nice translation from the traditional strategy controls of mouse and keyboard.