Puzzles games are something that have recently become scarce after a period of flourish on the Nintendo DS system. There were games like the popular Brain Age series and Picross 3D. There were so many puzzles games on the Nintendo DS that it was often difficult to pick the good from the bad. In a way, it made perfect sense. Taking a handheld video game system everywhere you went meant that you often found a negligible amount of time to play some type of video game. Puzzle games were easy to open and solve so it does make sense that there were so many on the DS, but recently there seems to be a drought of puzzlers on any Nintendo platforms at all. Right now I own just one for my Nintendo 3DS which kind of disappoints me. I would love to see more puzzle games come out on Wii U and 3DS and luckily, Word Puzzles by POWGI released on both!

In Word Puzzles by POWGI, there is a total of six types of puzzles for you to solve. To better organize my thoughts on the game, I will go through each type and try to explain what does and does not work about every one of them.

Word maze plays similarly to a word search. You are given a category and a grid of letters, but rather than finding the words hiding all over the puzzle, you have to follow a path that works much like a maze. For example, one of the categories is colors. The game starts you off on a word and you have to go from there. I was given the word black and had to follow the word purple to continue the maze. At times it can get difficult to actually find many of the words. In that same color category, I was given some obscure colors such as “azure” and “burgundy”. As I will mention later, many times it feels like you have to really rely on your knowledge to solve many puzzles. You will probably find yourself using the hint feature just to reveal the list of words you need to find, and that kind of grows to become a problem with some of the other categories as well.

One word has to be my least favorite of all the puzzle types. It plays much like a standard word search, but the gimmick is that you only have to find one word in the whole puzzle. The problem with it is that you are never given the word to find unless you use the hint feature. Instead, you are given a quote from some sort of famous figure as a hint to find the word. There are many problems with this way of playing a word search. Since you are only finding one word, that means that all the letters in the puzzle are only letters that are in that word, making the puzzle confusing and difficult to even look at. Like I stated before about word maze, personal knowledge becomes vital in this puzzle type. Not knowing the quote can make solving any of these puzzles difficult and overall just frustrating. I constantly found myself wishing that I was playing a regular word search instead. 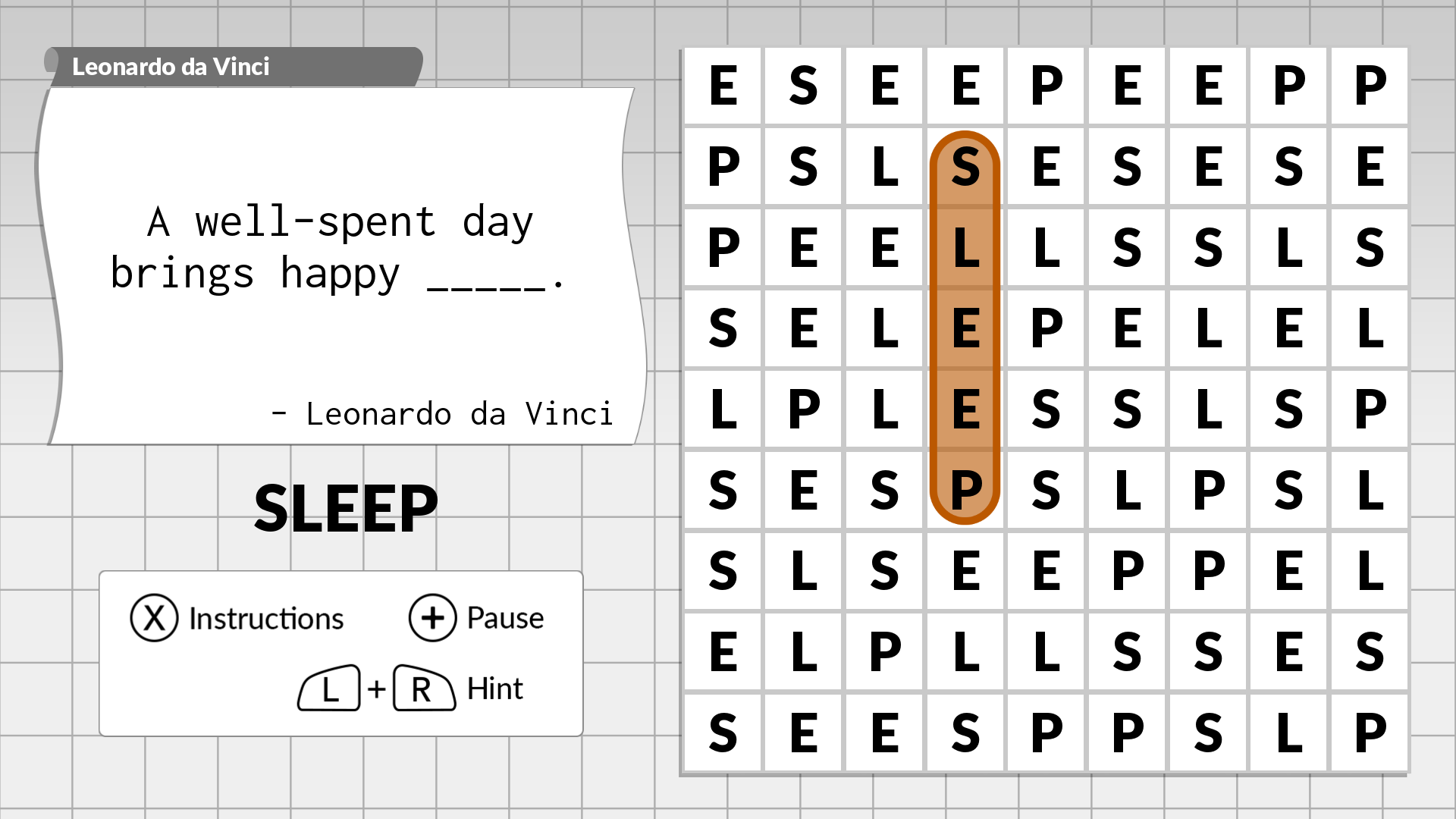 Mixups is a pretty simple game where you use scattered letters to try to spell out words that fall under that category given. I have seen puzzles like this before so there is nothing really new about it. Mixups makes for some easy classic puzzle fun.

Circles is a type of puzzle that was new to me. You are given three overlapping circles and a question mark in the middle of all three of them. Every circle has its own letters, which when used in the correct order, spell out a specific word. All three words fall under the same category, but as part of the puzzle, you are not given what that category is (unless you use the hint option of course). The question mark in the middle plays a really important role. It is your job to change it into any letter that will then be used in all three of the words. I believe that this adds a really interesting factor to the puzzles since this means that you are always missing a letter that can be crucial to understanding what any of the words are and what the theme/category is. Circles is definitely one of the better puzzle types.

Crossovers is a pretty simple game. It works like a minuscule crossword where you are given a vertical and horizontal line. There are letters with a question mark somewhere that connects both words. You have to choose from four letters, picking only one, that if placed where the question mark is, will make two complete words. After solving a set of these crossovers, the letters you chose are then used to solve a riddle. 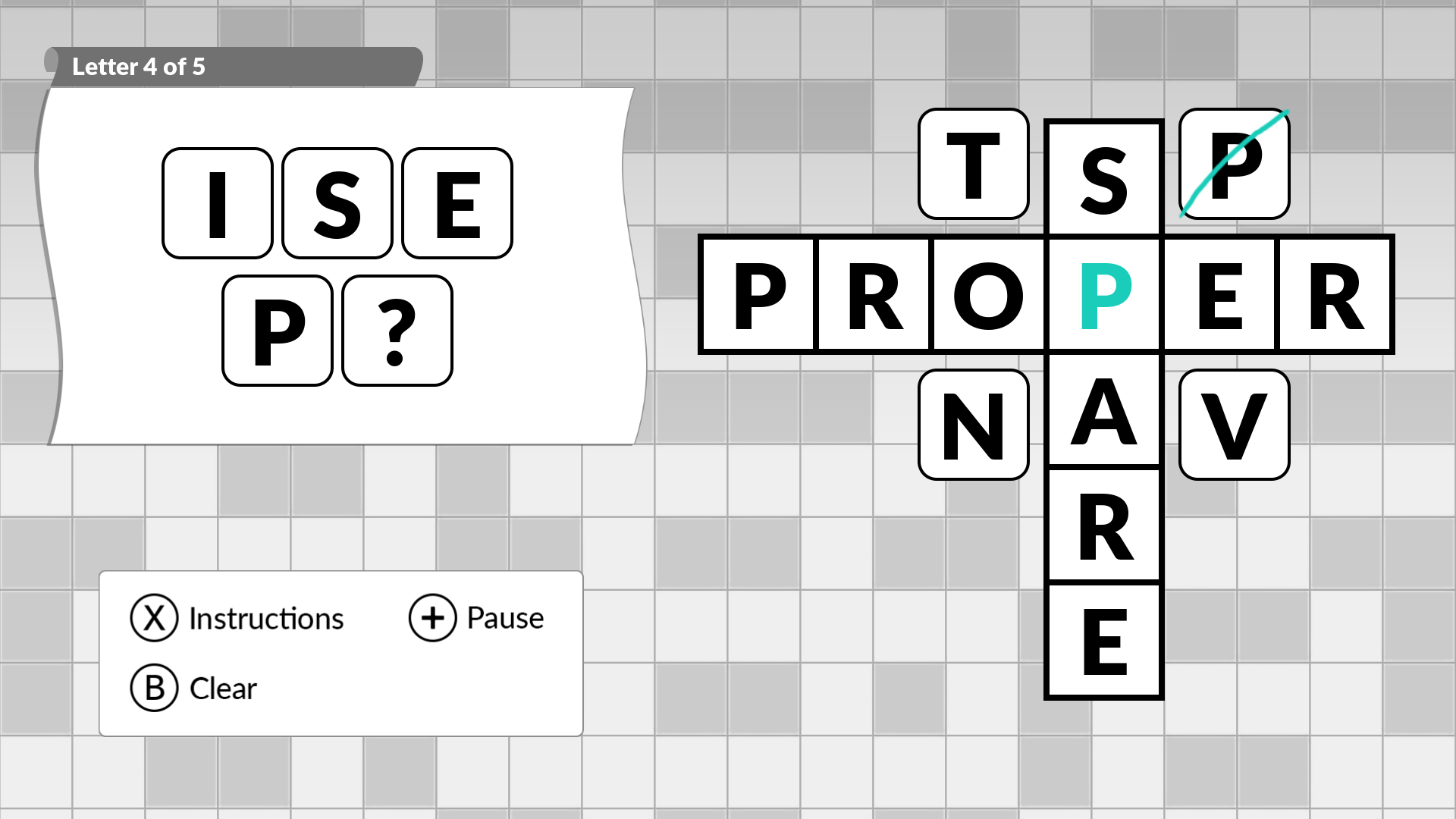 The final puzzle type is flowers, which I have to say is pretty unique and different. You are given a “flower” with two letters in the center of it. Around it are petals which have two boxes for two different letters. To the right of the flower are letters in pairs which are used to place inside the petals. To solve the puzzle, you have to place the letters on the petals so that when they read across with the center, they spell out a word. For example, the middle of the flower could have the letters -ap-. On one petal you would place –we- and on the other –on– to spell out weapon. This type of puzzle had to be one of my favorites because it challenged you to think about how a particular word would spell out when placed on different petals.

Word Puzzles by POWGI has a little less than 500 puzzles, offering up a lot of content for puzzle lovers. Aside from the developed puzzles, you can also unlock more by tapping in any amiibo. It is pretty amazing to see an Indie game include amiibo support, and this title even allows you to tap any amiibo that you have. However, the amiibo functionality does not work like I wish that it would. When I first found out that the game had amiibo support, I thought that I would be able to play Zelda or Metroid themed puzzles when I tapped in my Link or Samus amiibo. That is not the case at all. Tapping an amiibo to the gamepad generates a puzzle based on either the name you gave the amiibo or the name of the owner of the amiibo. Most of the time word maze puzzles were generated, so when I tapped my Sheik amiibo, the whole puzzle was spelling Sheik ( I name all my amiibo by their actual character name) over and over again. Although the inclusion of amiibo support can be appreciated, I wish that it would have been further developed and fleshed out.

In the end, Word Puzzles by POWGI offers a lot of content and variety for those who like the puzzle genre. Although there are a lot of areas where it could be improved, it is overall a decent title for puzzle lovers.