Ever since Games Workshop opened so many years ago, board games fans and gamers have put countless amounts of money and hours into miniature figurines and video games. Now the team that brings you the Total War series have teamed up with Games Workshop and brought us Total War: Warhammer. This is the first time the Total War series has ever swayed from the real life combat scenarios it’s known for.

Total War: Warhammer is set in the dark fantasy realm of Warhammer. Where orcs and dwarves destroy each other, humans, and their chaos counterparts. Just like other Total War games, Total War: Warhammer uses a very similar system in its campaign. A top down view over a very expansive map. Only with Warhammer, developers Creative Assembly have been unleashed from there realistic boundaries and have created a gorgeously detailed map with details such as skulls in mountains, volcanoes erupting, and huge dwarven architecture. The campaign uses two different modes, short and long campaigns, with the longer simply adding more objectives to complete.

Total War: Warhammer gives players access to 4 playable factions and the Chaos Warriors pre-order DLC. This choice gives this unique strategy game a ton of replayability and a nice variety. Each faction plays totally different to each other, Dwarves, Empire, Vampire Counts and the Orcs. Only downside is it also misses out quite a few factions such as the Skavens, the High Elves, Lizard Men, and Tomb Kings, plus many more. All these missing factions may mean there will be plenty of DLC to come for Total War: Warhammer, hopefully.

Throughout the campaign, you are given objectives to complete such as taking revenge on an enemy general that has just destroyed your army or capturing a town etc. A new feature in the campaign is that each city is located within a district. The dwarven campaign starting city had 2 extra small towns and you can apply many different buffs to that district such as higher taxes, happier populace, and more income. You can only apply this buff when you have control of all the cities in that district, giving you target cities to aim for and capture from the enemy.

Politics have been made a lot easier this time around. Simply double click a faction’s units to speak to their leader and demand whatever you like. The success chance is next to the demand and is easily distinguished by a traffic light system, red being very unlikely, green being very likely. Racial ethnicity plays a big part in Total War: Warhammer, and it isn’t forgotten about either. Orcs are the sworn enemy of the dwarves and the Chaos the enemies of the Empire. This has to be thought about when entering negotiations with the opposite faction. Orcs don’t take to kindly to dwarven scum and the likes. 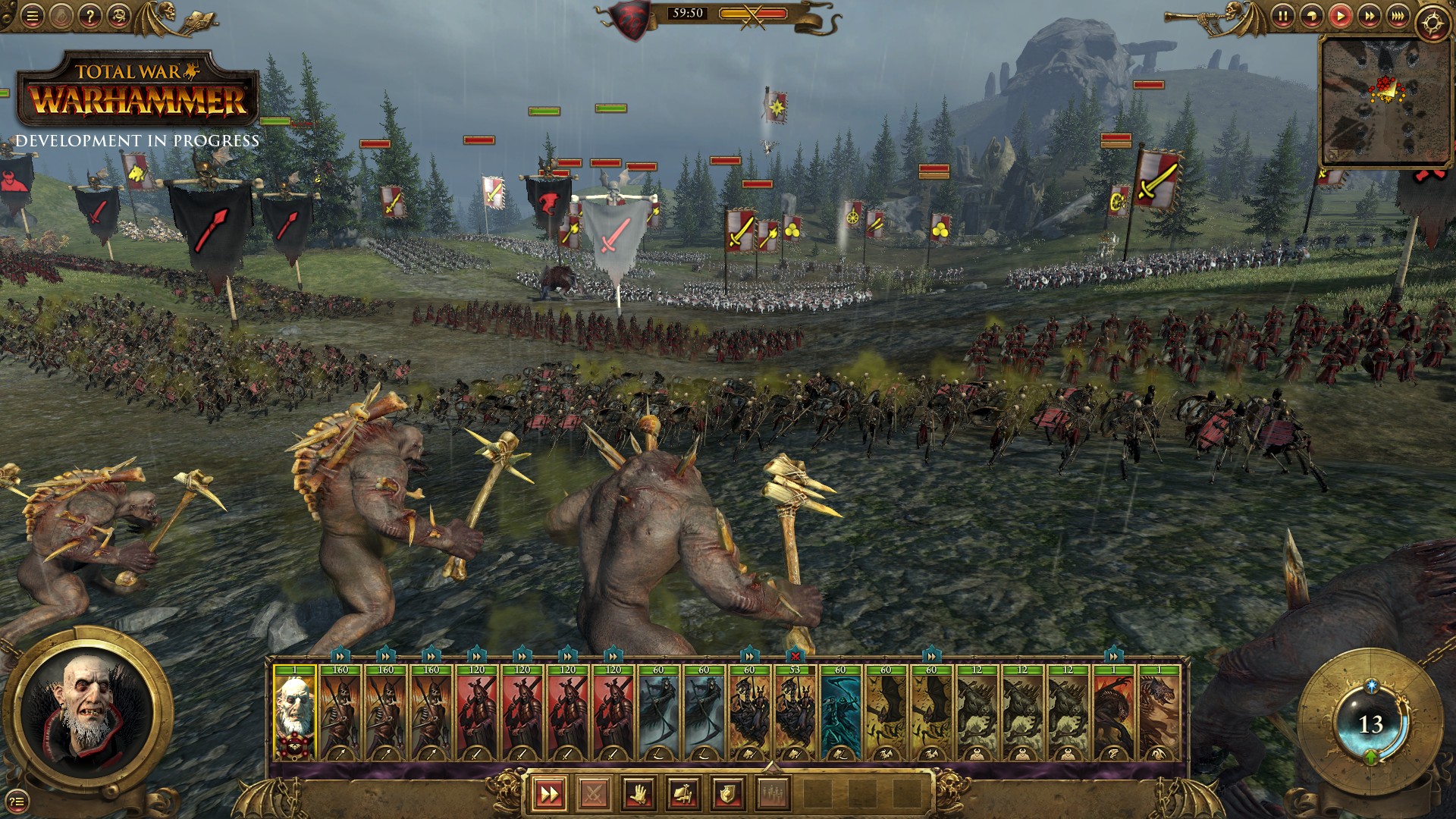 Technology trees play a big part when it comes to turn based strategies. Total War: Warhammer is no exception to this. The bottom right panel, which is easy to access, shows the amount of turns left before you have researched the technology you chose previously. Arrows guide you through the tech tree so you know which research leads to another. Depending on your play style, you can choose to develop your units in combat or go for a more economic approach and develop your cities.

With this being a fantasy setting, a big thing about it is about loot and rare weapons. Creative Assembly have implemented this into Total War: Warhammer brilliantly. Heroes and generals can equip famous and powerful relics. Weapons, armor, amulets, and rings have been introduced each adding a different look and quality to your equipped hero. Some of these items can even change the tide of combat by being equipped to a single hero unit.

Combat is what a Total War game is all about, and Total War: Warhammer couldn’t be a more perfect match for it. It’s like apple pie with custard. Warhammer has always been based around massive armies facing off against each other with magic flying, mythical creatures, and all. How did Total War go from being a military based realistic fighting strategy game to implementing all these changes to combat to accomodate the Warhammer universe? The mind boggles but it’s impressive. Combat plays out a bit differently too with the inclusion of large units like giants and spider queens. Creative Assembly have stayed as close to the tabletop authenticity as possible. Units like the Dwarven Slayers, who are duel wielding psychopaths, have a combat bonus against these large opponents. Knowing your enemy plays a big part in Total War: Warhammer and knowing which unit to field is paramount. Combat in a Total War game is all about being tactical, flanking enemies whenever you can and using the correct counter units. With Total War: Warhammer, it’s added a whole new element to just the normal tactical role, with abilities such as manually controlling catapults, etc. I could take control and manually fire the catapults which then gives you an action camera viewpoint as you follow the massive lumps of rocks until they crash into the enemy. It’s a very nice addition. 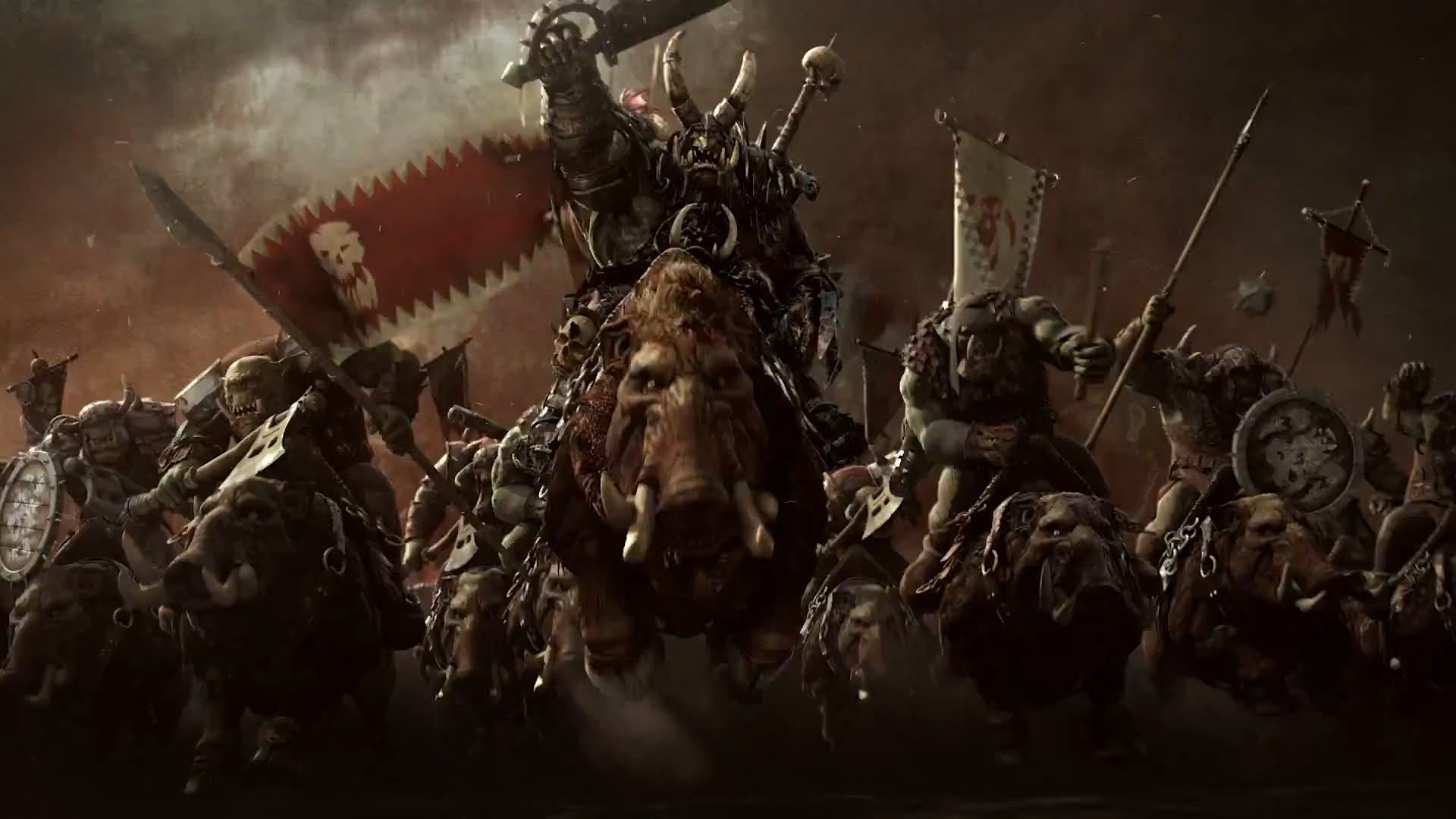 Magic is only assigned to those who are capable of using it such as Rune Priests and wizards etc. Their abilities are displayed in the bottom right corner of the screen and use the winds of magic as a mana pool. The more powerful the spell, the more mana it will use. These spells, just like in the tabletop version, also have a chance to go horrifically wrong by either destroying the wizard using the spell or damaging your own units.

Total War: Warhammer doesn’t come without problems. I had a few graphical hiccups in the campaign and in combat. Smoke effects disappearing and screen tearing were a common sight. Combat also has a few issues. When facing an enemy army that was mainly ranged classes and my army was more melee orientated, I would find when attacking a range unit with melee, the ranged unit was set in skirmishing mode. This meant the ranged unit would run away from my melee, forcing the unit to run the whole map chasing after it. If I wasn’t paying attention, I would end up with units all over the map, and these are very big maps.

The maps used in combat are superb. Creative Assembly have done a great job of capturing the essence of its tabletop counterpart. Orcish structures litter the landscape when in orc territory. The landscape changes impressively when the undead are nearby, becoming hostile and inhospitable to the living. As the Vampire Counts move across the campaign map, the landscape changes and the lush fertile surroundings die off and become dark. Graphically, Total War: Warhammer is stunning, constantly introducing you to new, beautiful scenery. The detail on the armies, the famous characters, and heroes that Warhammer is known for is superb, and detail is everything when it comes to Warhammer, so Creative Assembly have delivered.