Straight off the bat Shadow Warrior 2, the highly anticipated new title from Flying Wild Hog, makes it obvious that it’s probably going to be the most bizarre game you’ve played in a long time. It features a heavy mix of melee and ranged combat weapons to disembowel your foes with and a healthy dose of comedy thrown in to match. Oh, and a lot……a lot of dick jokes. 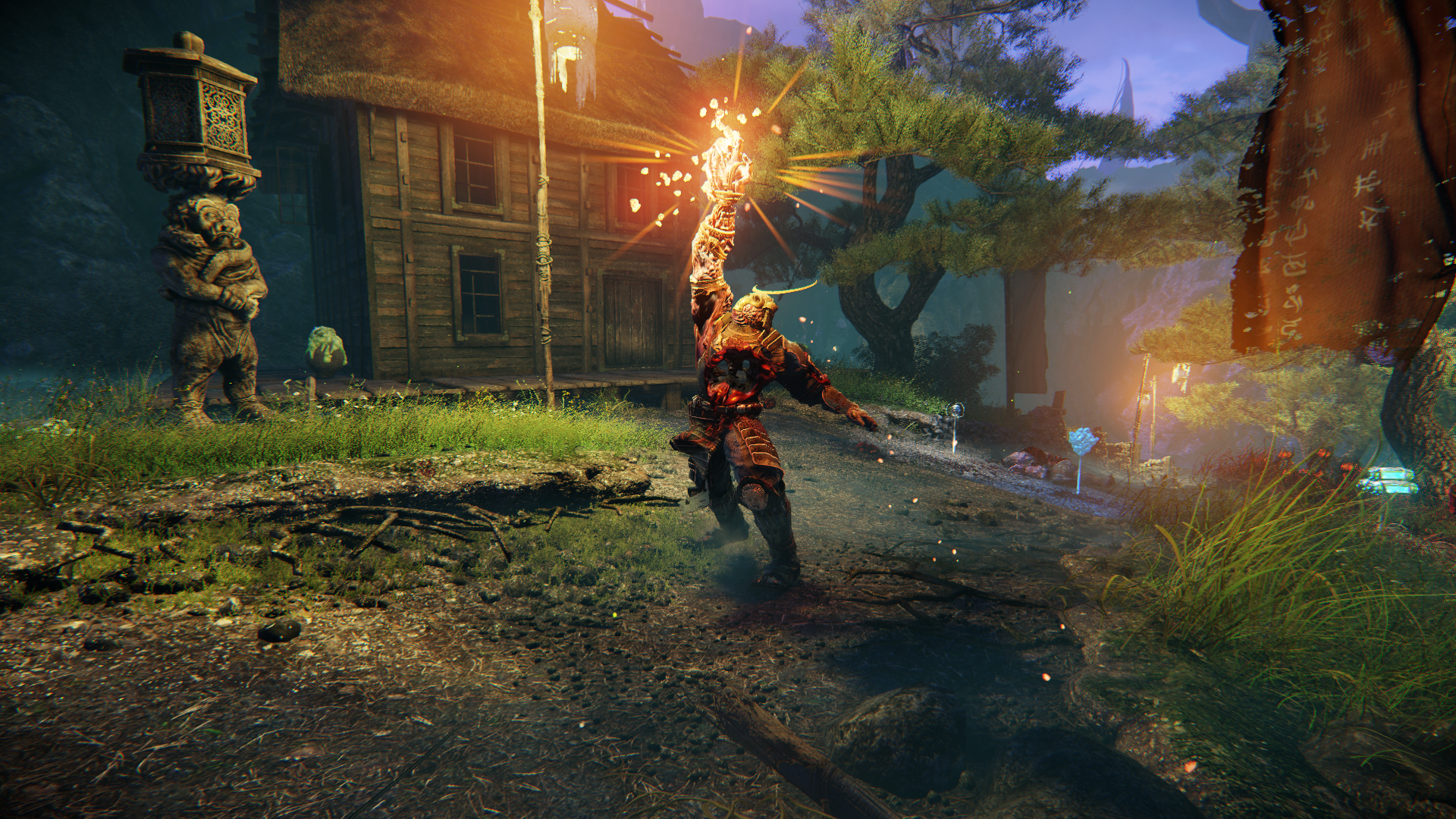 To start off, I have to say that the graphics in Shadow Warrior 2 look stunning, with plenty of graphical options to tweak to your desired preference. This is done through Flying Wild Hog’s own in-house engine, Road Hog. The hills and mountain-based missions are so colourful and vibrant and have a very traditional Japanese feel to them in the way that the gardens and buildings have all been designed. The same goes for the missions based in the vast cities ruled by the Zill forces, these environments feel cold and unforgiving, but with a good balance of light and vibrant colours in all the right places, it still made every mission feel immersive. The weapon skins are all very detailed, and each item is completely different. You can tell that time has been taken to make each weapon look unique, and not just through new skins for each upgrade of the weapons. By far my favourite weapon is The Emperor’s Touch, a cannon-like gun that blasts electricity that hits multiple enemies at once. This looks very impressive in the Road Hog engine with bright blue lightning spewing from the rifle and disposing of the enemy forces. 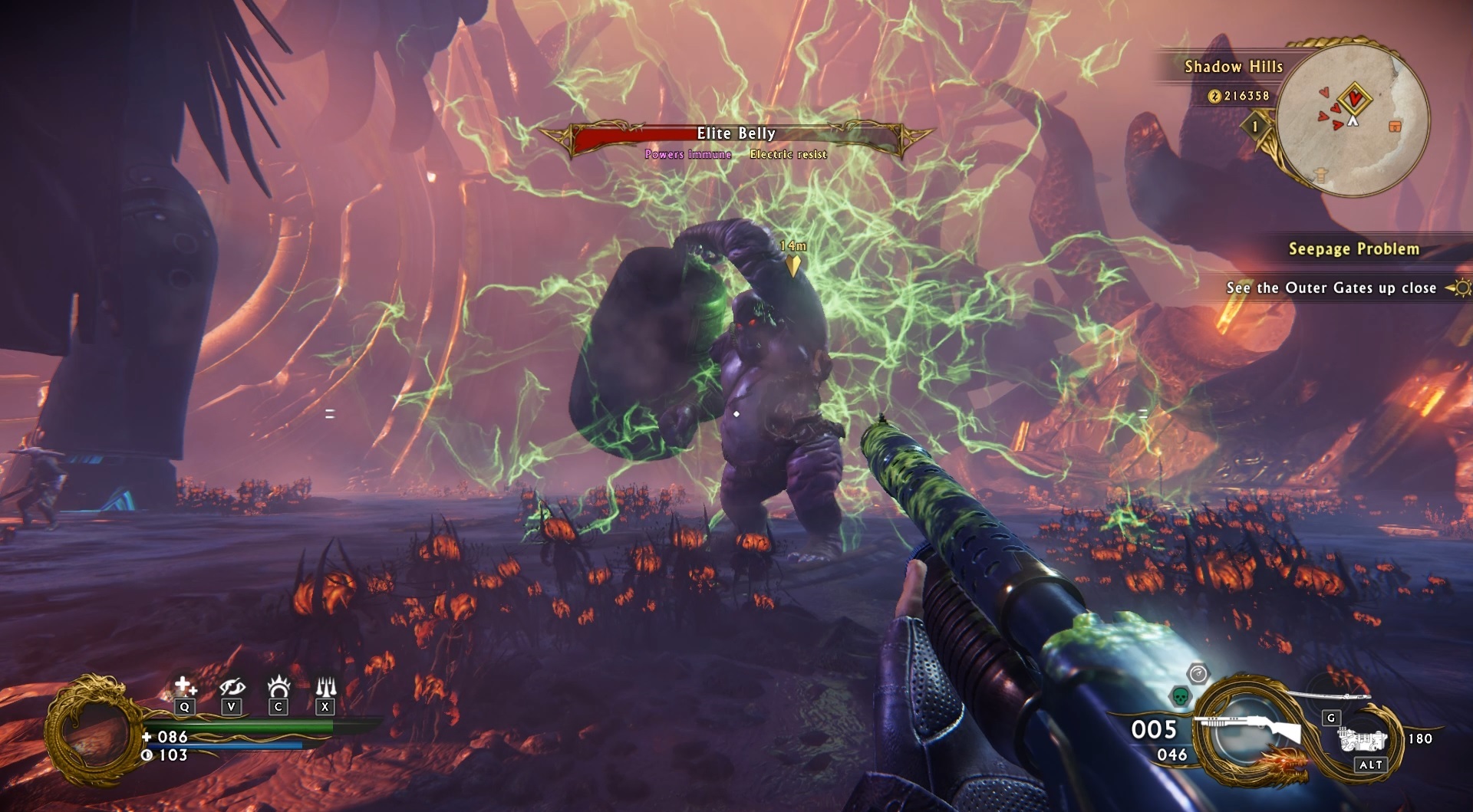 The gameplay in Shadow Warrior 2 is quick…..very quick. Speed is your friend as I found myself constantly dashing out of the way of incoming attacks from hoards of mutant-like monsters, robots, and venomous scorpions, both in the organic and robotic forms. The Zill forces have created a number of the natural world’s creations that you have to fight in robotic forms, along with the super annoying drones that scan the area and launch missiles just to make things even harder. This meant I had to take a different approach to executing them compared to the monsters found in the hill and mountain-based missions. This I felt was a good tactic to keeping the game feeling new, as I was constantly thinking of new and faster ways to kill the enemy. One of my favourite features in the game was the skills and upgrades menu; this allowed me to pick from a load of runes that I had collected throughout the missions. You can find these in boxes that are dotted about the missions; sometimes they are dropped from defeated foes or after boss fights, and in this instance they are usually of better quality granting more powerful items or upgrades to the weapons system.

Skill points are earned through completing missions as mission rewards and can be used to extend skill duration including weapon rate of fire, healing times, invisibility duration, and any other skills that you unlock whilst working through the campaign. This was a vital addition, because as the missions went on the enemies became harder to defeat, and I seemed to be fighting a lot more of them in one go than in the earlier missions, so I feel as if the collecting of runes is an important and much needed part of Shadow Warrior 2. Within these runes are certain ones that have elemental effects that can be used to defeat the more difficult bosses and monsters including fire, toxic, and electricity, although some enemies are invulnerable to certain elements, and even worse, invulnerable to all powers. These powers are again learnt through completing missions and enabled me to be invisible or summon giant spikes from the ground, impaling my foes for a short period of time whilst I whittled down their numbers. Again, this is another example of how Shadow Warrior 2 kept the gameplay engaging, making me want to complete missions to constantly make my character, “Wang”, more powerful. 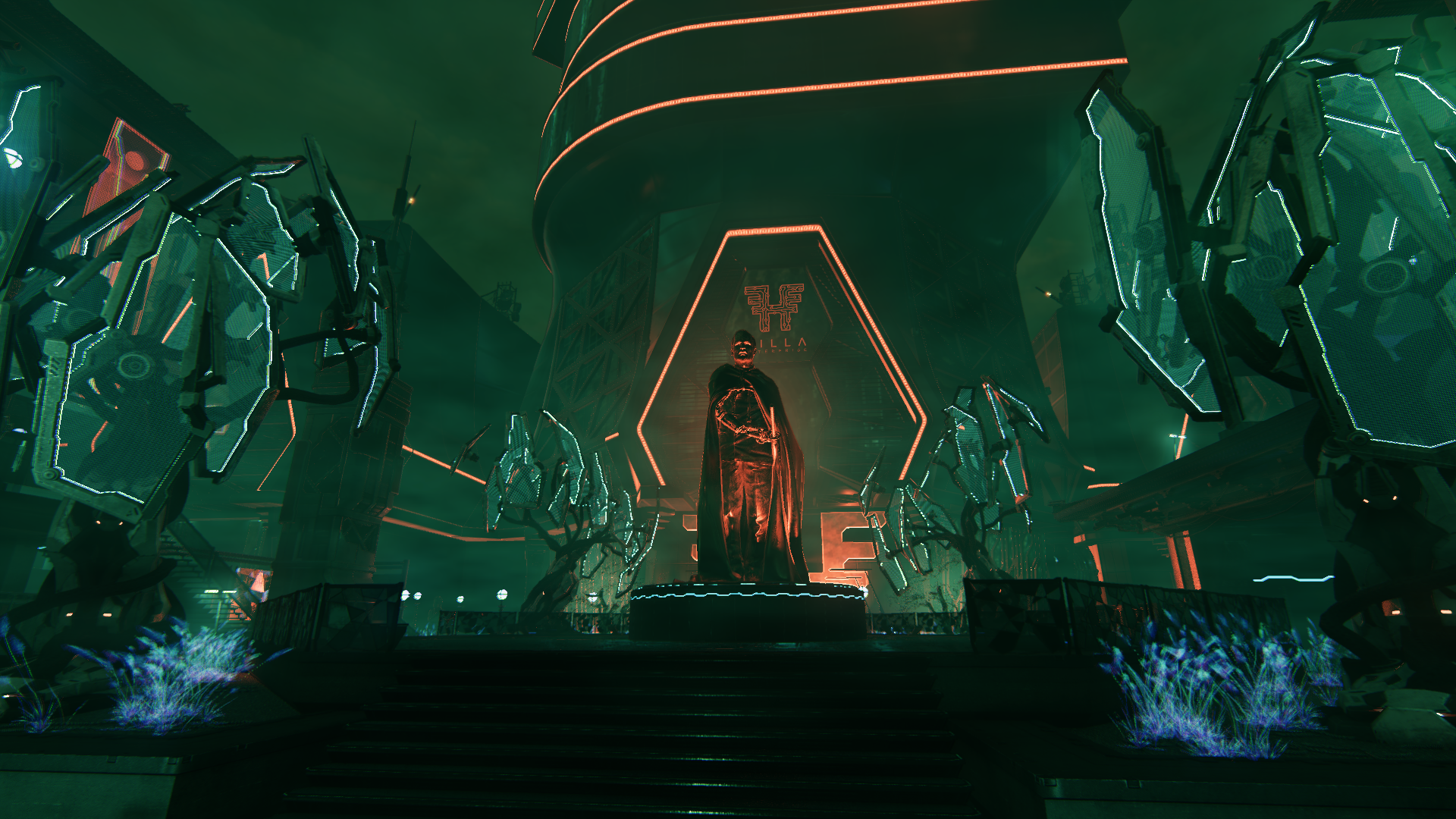 Some of the main aspects that made Shadow Warrior 2 such an enjoyable game were the constant dick jokes and stupid childlike puns that had been woven through the entire storyline. This was a good way to actually keep me watching the cutscenes that I would usually skip during other titles. The entire playthrough was hilarious in fact, I mean even your character’s hideaway is called “The Wang Cave”. You also constantly find fortune cookies filled with utter nonsense and the odd piece of graffiti which, again, is usually something to do with wang and dick jokes. Alongside these little humorous tokens are collectible totems. Carefully hidden around the missions, these were not easy to find, sometimes seeming invisible. I also happened to come across a small Easter egg, shall we say, in the early stages of the game; a nice little touch I always like which should be included more often in games. Shadow Warrior 2 has a lot to deliver and offers the possibility to play the game through again in up to 4 player co-op. This is further merited by the fact that the mission maps are randomly generated to some extent, making a second playthrough different from the first. Shadows Warrior 2 also offers up many different and interesting boss battles, a variety of attacks and strategies that are even detailed whilst in the mission loading screens to help you out, and there are over 70 awesome and unique flesh shredding weapons to be found or unlocked throughout the story mode. 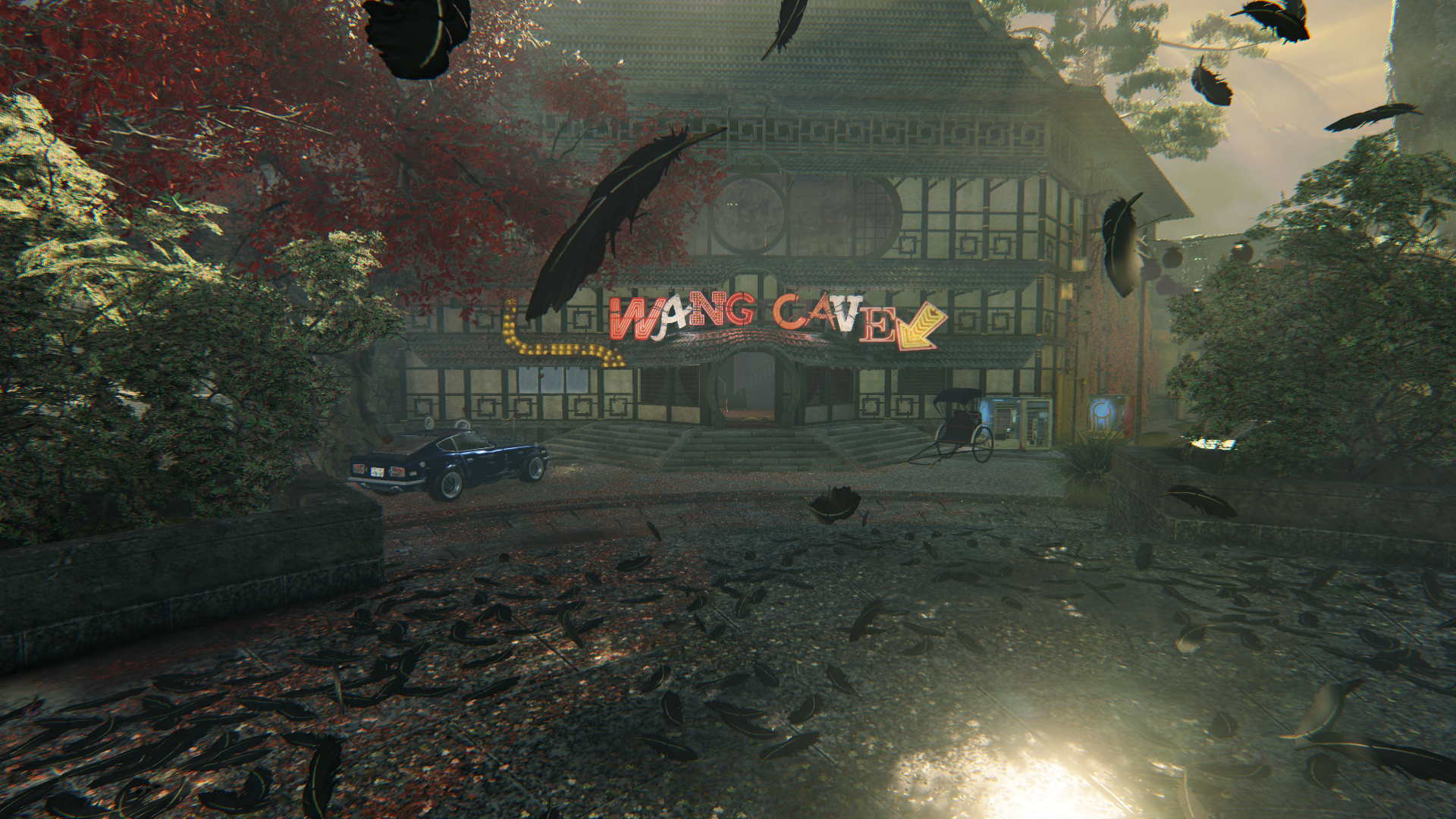 There are a few points that bring Shadow Warrior 2 down. The first one I noticed was that the graphics, although i previously mentioned they looked good, seemed blurred and out of focus in some areas, making close up objects appear fuzzy and hard to distinguish, emphasized more in tall grassy areas. The detail in moving water seemed very poor also, letting an otherwise great graphics engine down. Another major part of Shadow Warrior 2 and almost any game should be the storyline. I felt as if the storyline was very much on a shoe string and just served as an excuse to go slaughter everything in Wang’s path. A shame since an intriguing story would have made me enjoy this game even more. Something I started to notice after a few hours of play was that all the missions based around the city looked exactly the same, and the same issue applied for missions based in the hills and mountains, all using the same textures and items in each level just arranged differently. It kind of takes away the feeling of adventure when I didn’t find myself entering new environments too often.