Ahh, Tomb Raider, a series so classic that even people who’ve never played a video game in their entire lives can name the main character. We’ve seen the series go from high points to low points to being entirely rebooted, twice! Now it’s time to see if the latest version of everyone’s favourite grave robber has true staying power.

The story of Rise of the Tomb Raider has much more in common with the kind of plots that fans of the old school series will be more familiar with. Instead of being set in a single location, the plot consists of a single quest but follows our main character across the globe as she hunts for her goal. This time the quest is to find ‘The Divine Source’, something that is thought to grant immortality to those who use it properly, and coincidentally it was the item that Lara’s father was trying to find before he died. Intriguing.

The quest takes a turn for the dangerous, however, when a secret organization known as Trinity starts hunting you down for your information on the artefact, and very soon shock, horror, and betrayal dog Lara’s every step. As far as plot goes, it’s good that the game decided to go for a mix between the classic style of plot from the older games and a more modern take on the sort of adventure story which Lara was first based on. It can be difficult to hit a perfect mix between these two factors, but this game just about manages to pull it off. 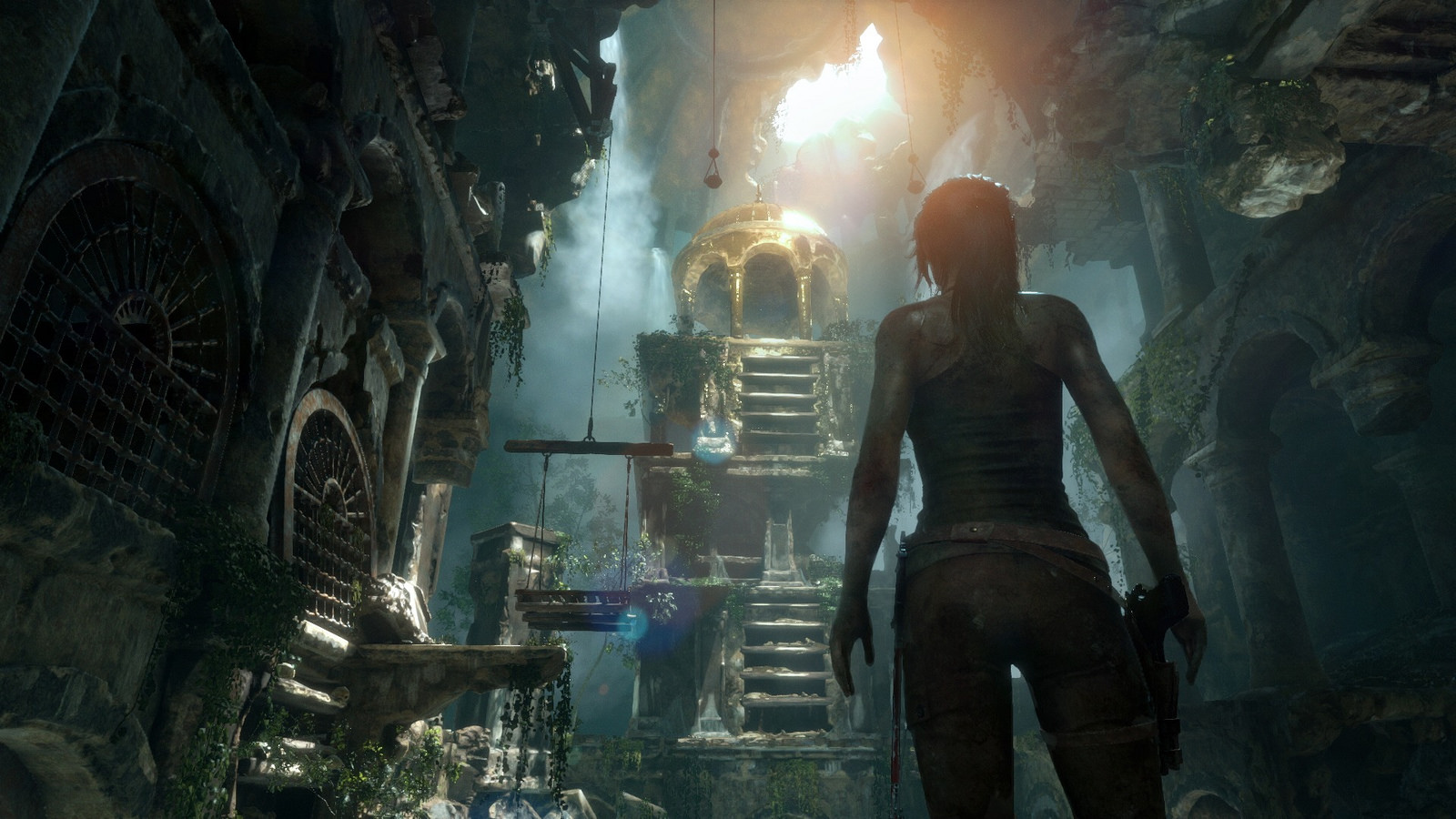 The first thing to note about the gameplay is the difficulty increase. In the last game it was possible to completely breeze through the whole thing on the hardest difficulty without much challenge, but now there are sections that feel tricky when playing on the normal difficulty setting. This increase in difficulty is much welcomed, giving the game a bit more bite in the areas that count and a few of the areas that don’t as well.

The difficulty settings do create a slight issue, however, and the issue is that every difficulty setting other than the easiest has aim assisting turned off completely. While on the PC version that wouldn’t really matter, on consoles it makes aiming extremely difficult at times, especially since there are more wild animal enemies in this game than there were in the last. Most of the times that I had trouble with the combat was when I was facing off against wolves or tigers. Because they attack by running straight at you, it can be difficult to take them down. If they manage to hit you once, you’re also likely to take a lot more damage from them as they can chain two or three hits together, making wild animals a tricky proposition on any difficulty other than the lowest. What might have been a better solution would have been to slowly scale back the aim assist so it was less effective the higher your difficulty, instead of just being instantly gone if you want to play on normal.

One area where the difficulty does work well, however, is in the puzzles. There’s more of a focus on puzzles and optional tombs this time around than the last game, something which is very welcome indeed. Moreover, the puzzles have a very well calculated difficulty curve, starting with easy and simple puzzles at the beginning of the game and getting harder and more complex as you gain more and more gear throughout your adventure. It’s nice to see such a focus on puzzles in a series that was classically famous for its puzzles and brain teasers. 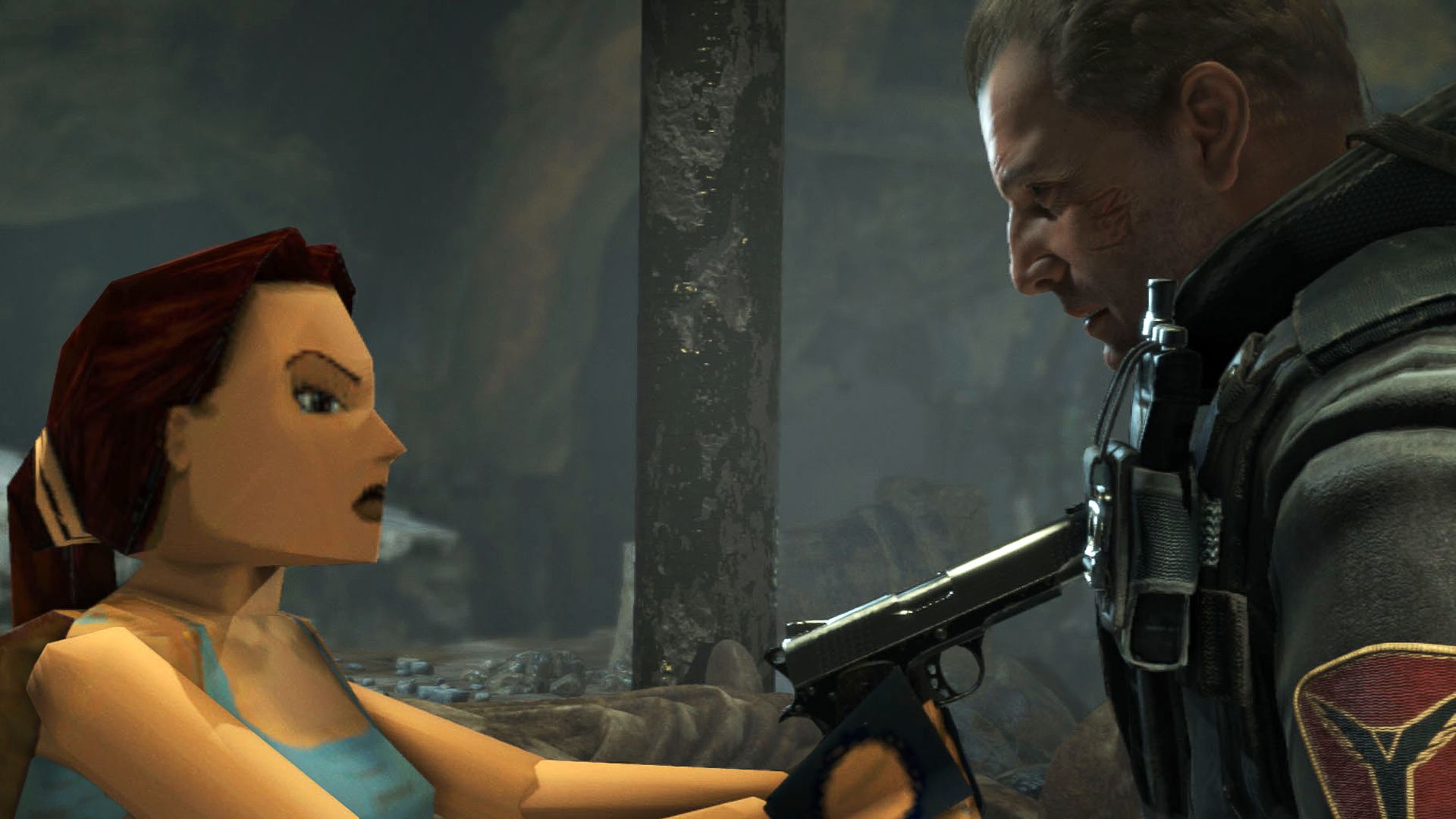 The game starts a little ‘on-rails’ with the opening, rigidly forcing the player to stick to the path and do what they are told; however, once the intro is out of the way, the player is presented with much more freedom and you get to explore the wilderness at your own pace. The resource and crafting system has been much improved from the last game. Instead of only collecting ‘salvage’ to upgrade your guns, you now have to collect a variety of different materials and resources which can be used not only to upgrade weaponry but also to create items like health packs, bombs, and storage increases.

One system that was a poor decision to add was the money system. As you go through the game, you collect ancient coins which are used at shops to buy new gear and costumes. The problem is that most of the gear that you can buy at these shops is stuff that you will just come across in the world anyway, so there’s very little point in buying them. “What if I want to access areas early?”, I hear you ask. Well, the problem with this is that even if you have the equipment you need to access most of the areas, there’s always going to be stuff you need to come back for. Therefore, why not just come back once you have all the equipment you needed for free and don’t bother collecting the useless coins? Needless to say, this renders the coins almost entirely pointless.

The game’s size is pretty impressive, there’s so much stuff to do in the base game alone that you could easily spend around 50 hours without even getting the full experience. Add on top of that the fact that the 20 Year Celebration edition comes with all the DLC, and you’re going to be playing this one for a while. 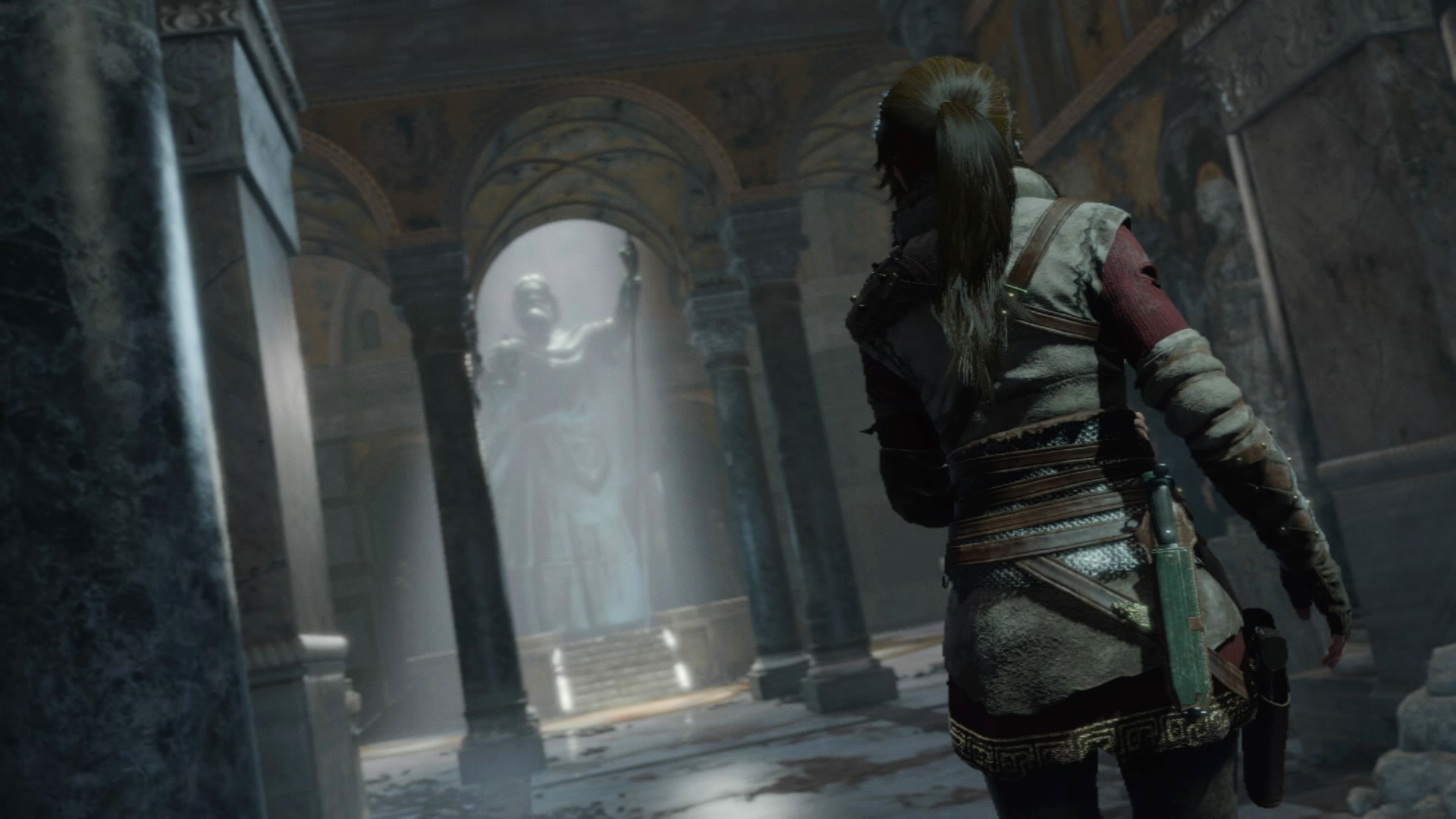 Apart from the main game there are several game modes available in the main menu. You’ve got the return of a classic with Croft Manor, a survival mode called Endurance, the token zombie mode with the Cold Darkness Awakened DLC, and a mission creator mode with Remnant Resistance.

Croft Manor is split into two modes. The first is a self-contained story called Blood Ties which is about Lara trying to save the manor from her uncle who is attempting to take it away from her. The main focus here is on exploring the manor, completing puzzles, and finding out more about the characters. It’s nice to see this classic location return, and there’s even a nod to some of the things that the manor was famous for in the older games. The second mode is called Lara’s Nightmare and focuses entirely on combat, something which isn’t a particularly good idea as I find the combat to be the weakest part of the gameplay. In this mode you run around a darkened version of the manor killing melee focused enemies like floating skulls so you can escape Lara’s nightmare. The issue with this mode, other than the focus on a relatively poor combat system, is the fact that there’s no multiplayer mode, something which is sorely lacking in a mode like this where combat is the focus.

The Endurance mode is a much expected inclusion since the series has had a focus on survival since the 2013 reboot. In this mode you have to manage your hunger and warmth meters as you explore the wilderness trying to find artefacts and avoiding Trinity. The mode works very well for the gameplay style, having more of a focus on staying alive rather than killing as many enemies as possible, and it’s always interesting to sneak around the wilderness stealth killing enemies to steal their weapons. You can also play this mode with friends online which can make things much easier and definitely makes it more fun.

As I said before, the Cold Darkness Awakened DLC is the token zombie mode and focuses heavily on stealth and avoidance. Your mission is to shut off a zombie making chemical plant by going to three towers and turning them off, all while trying to avoid zombie soldiers that have poor eyesight but good hearing. This game mode is interesting enough, and the new stealth mechanics lend themselves well to creeping around a dark train yard murdering soldiers. The most baffling part of this mode are the towers themselves. When you get to one, the game basically gets you to perform some arbitrary task to decide which switch will turn the tower off. If you press the wrong switch, either because you guessed wrong or you were so bored that you thought it’d be funny, a loud alarm sounds and a horde will descend upon you, leaving you to try and escape as best you can. Although this mode is appealing at first, it stops being fun very quickly, and there is only one map to play in.

We now come to the final game mode, Remnant Resistance. This is the most interesting as it allows players to create their own missions for people to play through, and with some creativity it could really lead to some interesting ways to play the game. The best part about this mode, however, is that it lets players dress the main character in whatever costume they want, and in the 20 Year Celebration edition this means you can run around as a variety of the older versions of Lara, including the polygon-tastic PS1 era costumes and the ‘dark and gritty’, slightly smoother PS2 era costumes. The only real issue with this mode is that there doesn’t seem to be that great of a variety of missions to do, although that could be because the PS4 version is so new or because the players just can’t be bothered. 99% of the time the missions were the same 4 things to do in a row with no change. 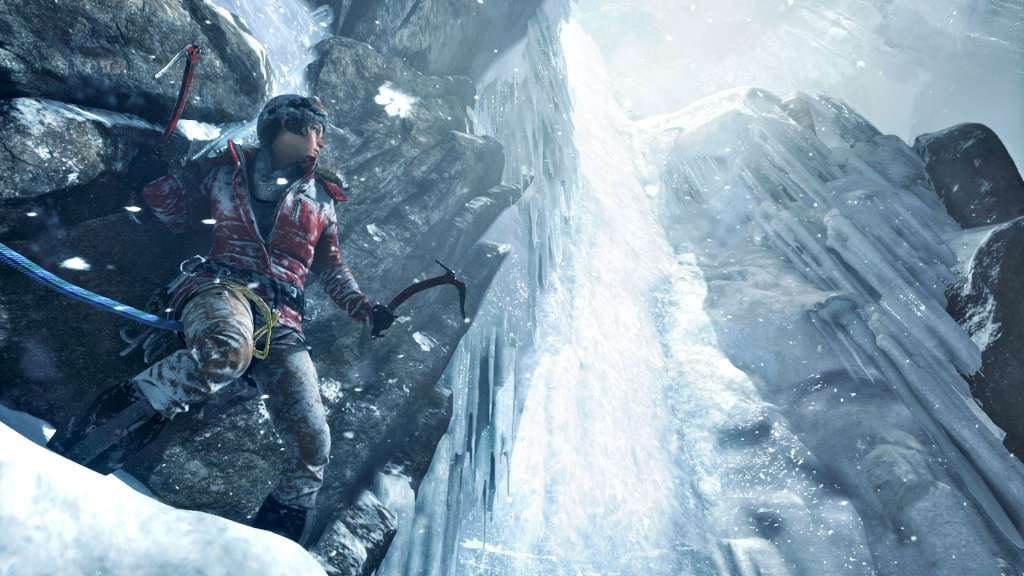 The last things to talk about with the gameplay are the cards and the micro-transactions. You can unlock card packs that give you things like new weapons, costumes, and modifiers to use in the extra gameplay modes. Some of these card packs are given to you from the outset and contain the classic outfits and some special weapon varieties, but others must be purchased from the store in the main menu. In the store you can spend a few pounds of real world money to purchase entirely random packets of cards; however, this micro-transaction system can be completely ignored as you earn in-game currency called credits for playing the different modes, and these can also be used to purchase card packs. Having said all of that, it is still disheartening to see a micro-transaction system in a fully priced triple A release.

Graphically, the game looks much like the last one, a decent variety of jungles, snowy planes, and ruins with a lot of browns and greens to fit with the wild aesthetic. However, the costumes for Lara can cause some minor issues, specifically with making her appear much less recognisable or iconic. You can dress Lara in different outfits that bestow a variety of effects like better healing or better sneaking, but they don’t look particularly iconic. If it wasn’t for the fact that Lara is almost always directly in the middle of the screen, I think I’d have a hard time making her out. The thing is that I feel like if I took a picture of the game and showed it to someone who had played the older games but not the newer ones, they wouldn’t know who she was, which is saying a lot considering that Lara Croft is one of gaming’s most well-known and iconic characters, even outside of gaming itself.

Sound-wise, the soundtrack is suitably Hollywood and cinematic but once again doesn’t stand out for any real reason. There’s nothing here that I will be humming or even thinking about after I finish playing the game. Honestly, sitting here recording this now, I can’t even remember any of the music at all.