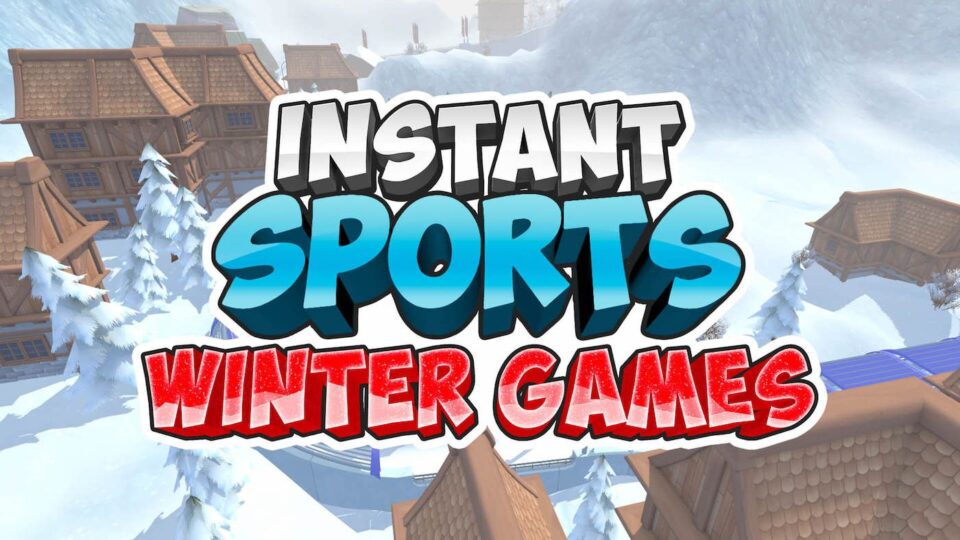 If you owned a Nintendo Wii, it is very likely that you played Wii Sports Resort. Similarly, you probably played Mario & Sonic at the Olympic Winter Olympic Games. These are examples of good sports simulation games combined with party game elements. On the Nintendo Switch, Mario & Sonic at the Olympic Games Tokyo 2020 is another great title that offers this type of game. But, what if £40 is too much for you to spend? Instant Sports Winter Games is a cheaper alternative at £25 or less. This sounds quite tempting for a recently launched game, but how is it? Does it capture any of the charm that the aforementioned games have?

Instant Winter Sports Games comes with seven different events. Now, if this is disappointing, you are not alone in that thought. If Wii Sports Resort (a game from 2009, by the way) can come packed with 12 different enjoyable sports, then there really is no excuse. Add to these sub-sports within these main categories and there are plenty of events. In addition, if the Nintendo DS version of Mario & Sonic at the Olympic Games (released in 2007) can come with 24 individual events, then it is far from impressive to have just seven included. To be fair, they were full price games when released, so to an extent, I can forgive it.

The seven events on offer are Alpine Skiing, Slopestyle, Bobsleigh, Ice Cross, Ski Jump, Curling and Snowball Arena. Now, I wish there were some more winter sports included, such asIce Hockey, Figure Skating, and Relay Speed Skating, but I can move past this. After all, quality over quantity is important. When we get to the events, however, they are not very good. None of them last longer than two minutes, so after 15 minutes of playing the game, you have played every event. There are two variations of each, but some of the variations offer nothing more than slight aesthetic changes. 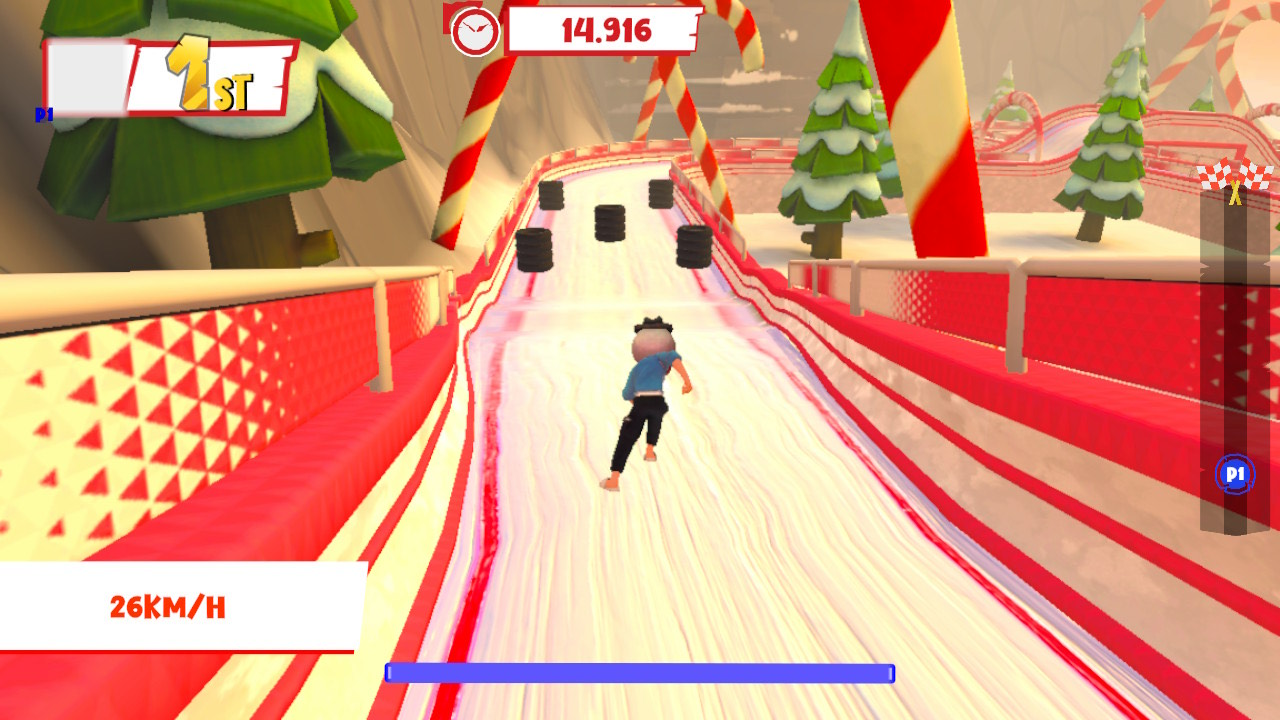 Alpine Skiing is the first event, and it is a very mixed bag. When you are flying through either of the courses at top speed, it can be satisfying. In fact, you are encouraged to do this, with a key objective being to hit checkpoints that provide a speed boost. Bizarrely, you are punished for going fast by missing braking points completely and wasting time getting back on track. There is a sense of realism with the hard braking and strategy, but this takes away fun from the event. The controls are okay, but after a few tries, you will quickly get bored.

Slopestyle comes next, and it is pretty bland. The basis is hopping onto a rail and pressing the same buttons to perform tricks again, and again; there is not satisfaction to be gained, and the exact same applies when you jump off a ramp. You press three (of a possible four) buttons in an uninspired sequence to perform a trick, and again, there is no satisfaction. Bobsleigh is monotonous as you move the analog stick and press A. That is it. Ice Cross controls poorly and is a very narrow track on both versions, which would be fine if objects, such as tire walls and ice sculptures, did not show up and punish you again for going fast. I would much rather have a longer course that is not challenging due to bizarre objects appearing. Rather, the course should be challenging due to tight turns and so on. 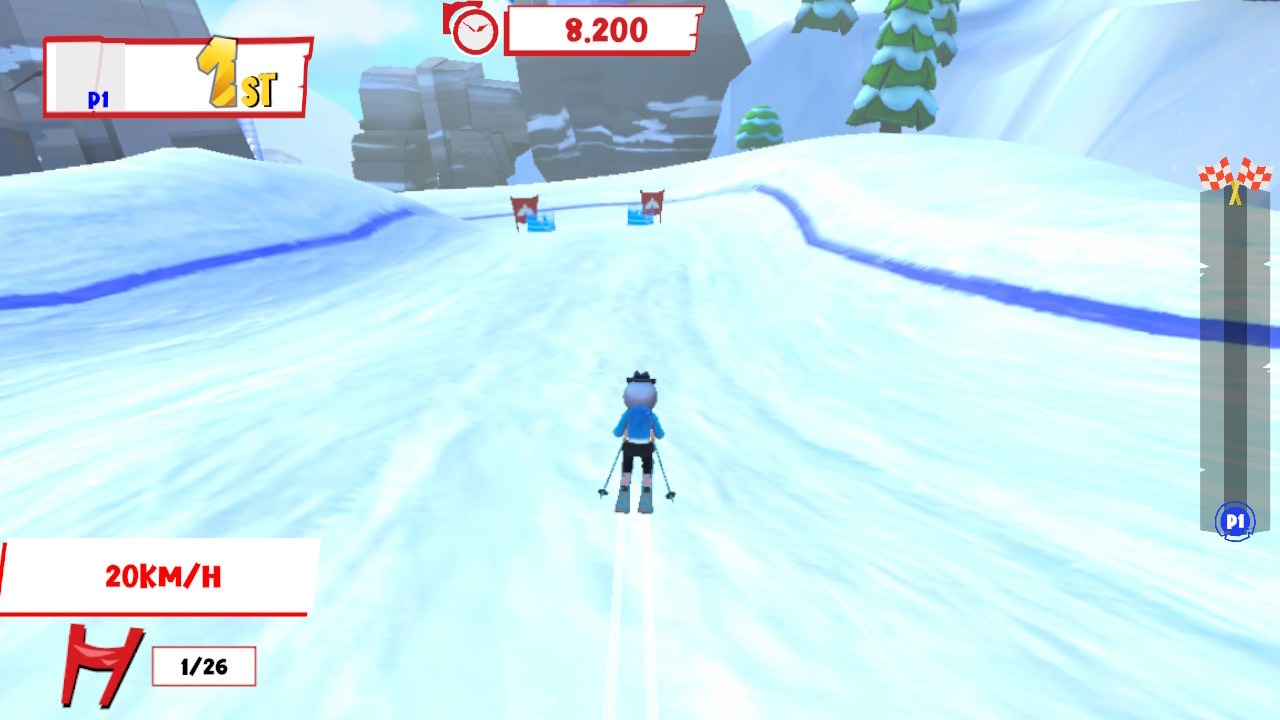 Ski Jump is basic. I appreciate the use of wind to make the event more difficult, but the way it changes every couple of seconds makes it feel gimmicky at best. Even so, it is a nice touch. However, the jump timing on this event is bad, and the only way to complete the jump is by constantly tapping A. This is probably the best working event, but it is still quite uninspired because there is no depth or reason to return after a few goes.

The worst two events are by far Curling and Snowball Arena. If it is just you playing, then these games last two minutes at most and are extremely easy. The AI competitors are complete pushovers, so you will not struggle. You will always go first in Curling, and the AI is easy to beat because it cannot reach the target half of the time. Snowball Arena’s AI moves predictably and leaves itself exposed too often. A difficulty option could have vastly improved the experience.

Playing with friends would make Curling and Snowball Arena better events. The key problem is getting those people to play with you. It is a big mistake to have just under a third of the events multiplayer-dependent. Developer BreakFirst should have implemented the aforementioned difficulty system into these events for people to enjoy the game by themselves. I can only imagine playing this game with three friends, but it would be difficult to sell it to them. 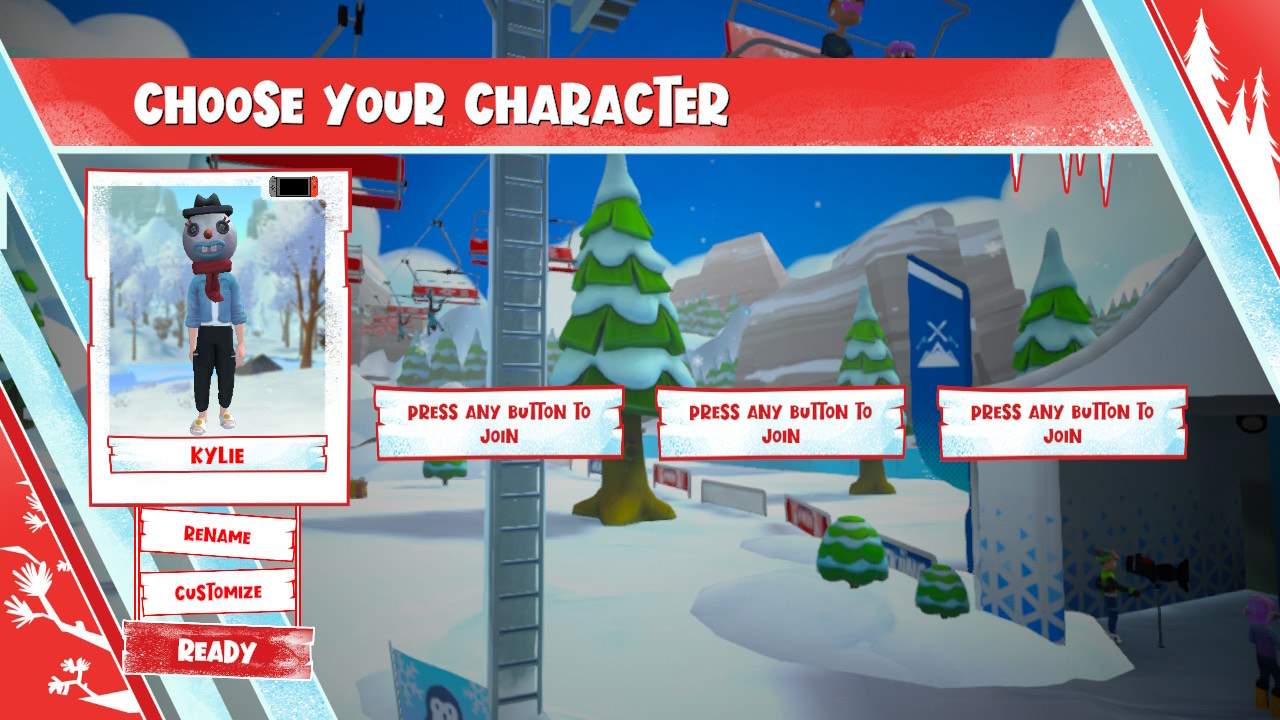 On first impression, the graphics are not entirely impressive, so how would I say this is worth playing over other simulation sport or party games? I like the festive look of the game, with Christmas trees and an abundance of snow everywhere! But Instant Sports Winter Games does not look particularly impressive, and I could see this in any winter themed game. Character models are not horrific, but they expose just how mediocre the graphics are. These models look like they are from a Wii game, not a Switch game released in 2021. I do like the ability to customise your character, however, and while not groundbreaking, there are enough options for you to have a unique avatar. Sometimes my only motivation to play events was knowing I could buy new customisation options but only to try them and see how they look in-game.

Up to this point, Instant Sports Winter Games must seem pretty underwhelming. I have not even gotten to the worst part yet. So, is it the price? No, although to charge £20 for this game is unjustified. My least favourite part of the game is the audio, particularly the repetitive music. 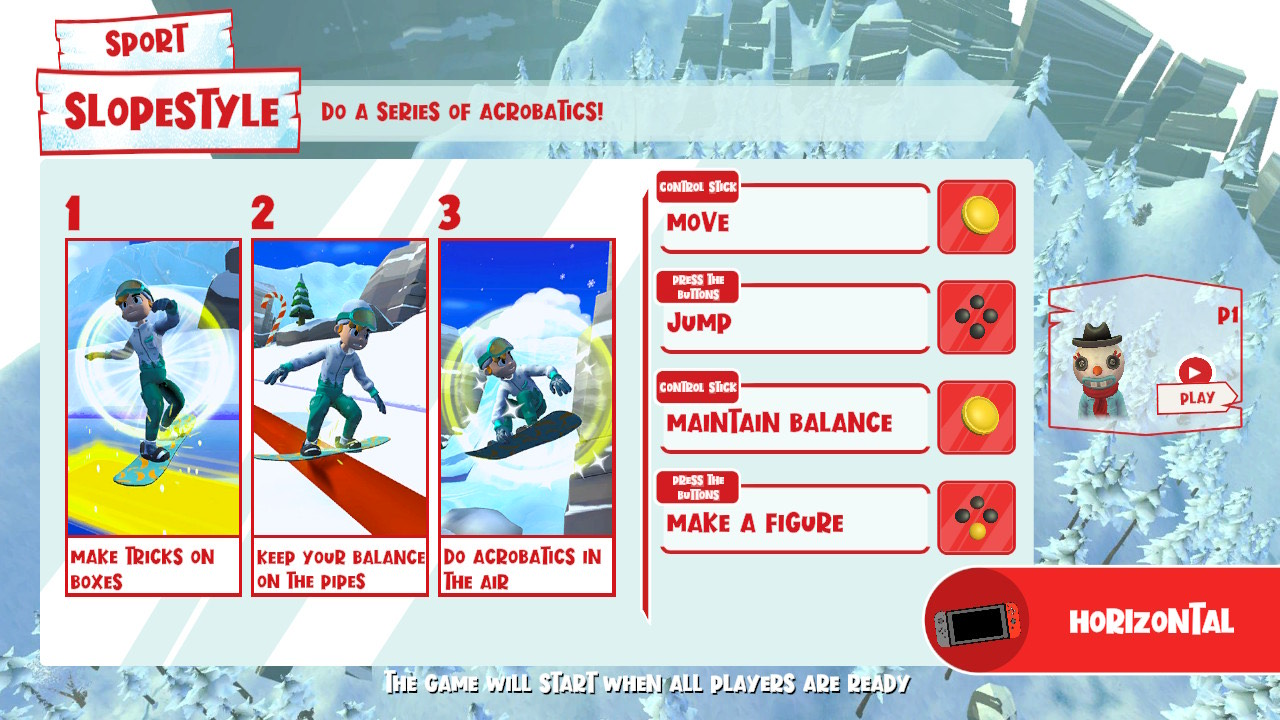 No matter which event you play, the same one track plays over and over again. I turned the volume down to prevent having to hear it any longer because it is bad. You should never have to mute a game out of hating the audio. At the very least, a few more tracks could have been a great improvement. As for the in-game sounds, such as skating and so on, it is often just one sound effect, no matter if you are going straight or turning, it is the same sound. Other sound effects come into play when performing tricks in Slopestyle or hitting a speed boost in Alpine Skiing, and they sound fine. 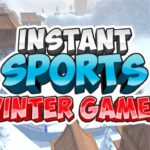 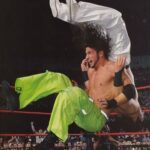 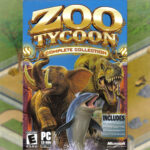