As somebody who loves fighting games, Omen of Sorrow has been an incredibly difficult game to get used to. Developed by AOne Games, Omen of Sorrow is a game that uses a 2D fighting system that gives players the opportunity to fight as characters inspired by horror villains. For example, the famous real-life legend of Dracula inspired the vampire-like Vladislav III, and the Frankenstein’s Monster was clearly a role model for the character of Adam.

Deep Within the Fights Themselves

As I stated above, Omen of Sorrow designed its fighters around well-known horror characters ranging from mummies and gargoyles to Dracula and the Frankenstein Monster. Ideas like these are fun to brainstorm on paper but don’t really feel like they have reached nearly enough of their full potential in gameplay. Iconic characters like these should feel powerful to control, but many animations and attack patterns feel slow and clunky. Speaking of attack patterns, there is an awful lack of combo opportunities to begin fights with. The game offers the player a command list that includes guides on how to execute Unique Moves; however, many of these moves are simple button prompts that look quite basic when performed. Actual combos can be executed when a character enters Blessed Mode, allowing normal attacks to chain into each other. However, I wasn’t a big fan of this mechanic as I fail to understand why I can’t perform awesome combos whenever I feel it is necessary, similar to games like Mortal Kombat. The command list also includes some absurdly long button sequences that can be exhaustingly tricky to pull off. The only way to really experiment with such moves is in the game’s Training Mode, which allows the player to control whether opponents can fight back or not. In the Arcade Mode, opponents can be relentless and will spam certain attacks that make it incredibly difficult to land a single hit, meaning certain characters are absurdly more difficult than others.

Spooky locations in horror are quite commonly quiet at first until somebody dies or the antagonist jumps out of the dark. As a result, the quiet settings create a sense of fear of the unknown and helps to produce immersion. The sound design for Omen of Sorrow takes a different approach. After you choose a character and prepare for the fight to begin, you will watch as the characters’ introduction sequences are completely devoid of any sound. The werewolf known as Caleb will appear to scream at the sky but fail to make a single howl, whilst Adam will be jolted by electricity from the wires in his head, producing sparks that had their volume turned to mute by accident. There is plenty of music in the form of a soundtrack, which I actually believe is one of the game’s best aspects. Each arena seems to have its own music, and fighting alongside haunting choirs and electrifyingly loud instrumentals is brutally chilling. Try not to die though because once you retry a fight, the music vanishes, and the only sounds left are grunts of pain from the characters fighting each other and the overbearing voice of the announcer, who loves to constantly shout the word “Counter!” every second. Either the game is bugged, or it’s just bad luck on my end. 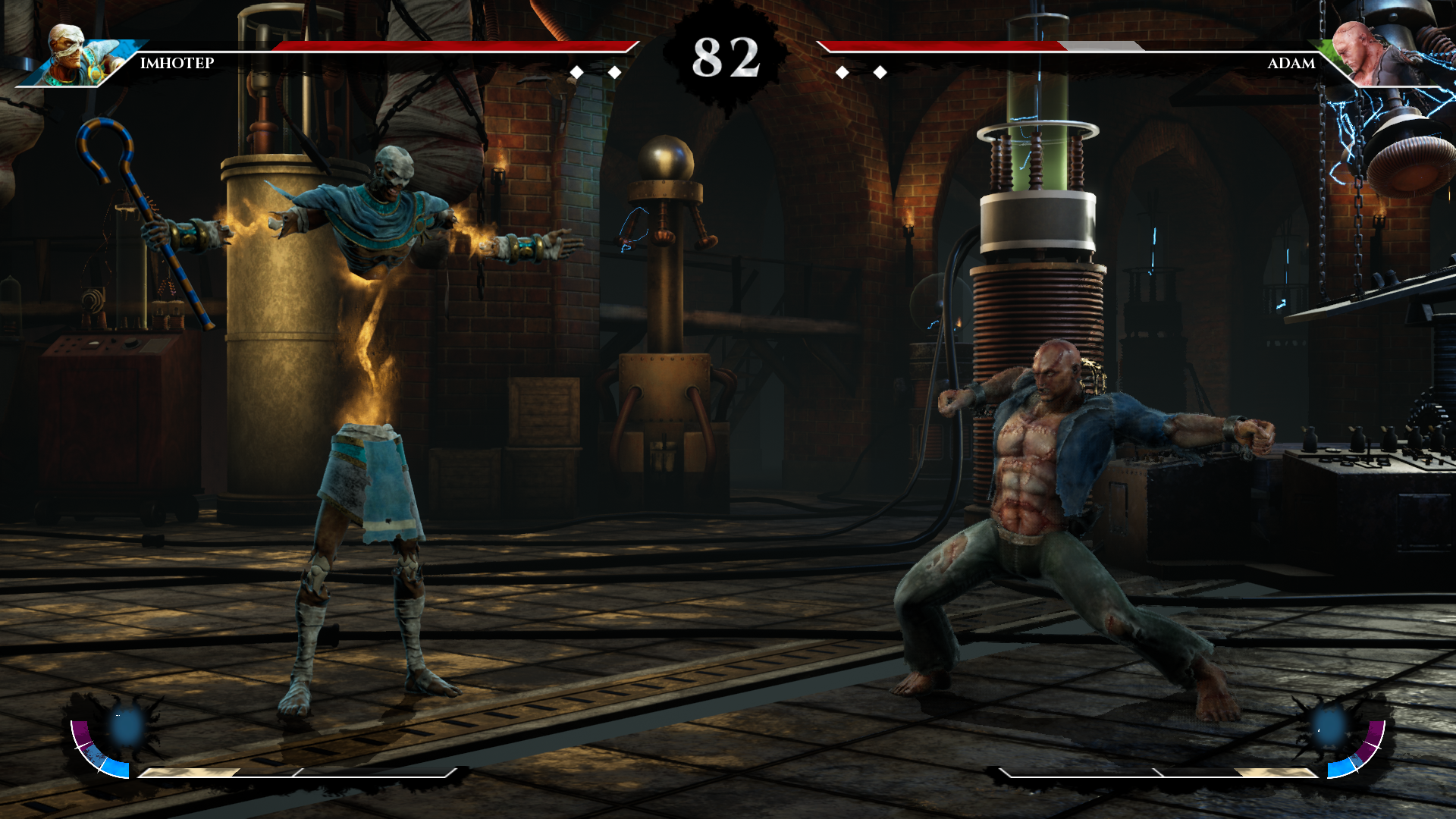 The Design for Omen of Sorrow

Both characters and level design are hit-and-miss in some places. Adam, inspired by the Frankenstein Monster and possibly referencing the Buffy the Vampire Slayer villain of the same name from season 4, seems to belong to a laboratory stage surrounded by giant electrical conductors and control panels. The character fits in perfectly with the setting, and the level itself has a great appearance to it. However, other characters feel poorly designed, lacking the love that went into creating different fighters, like Imhotep, a robed mummy who can split into two halves using magical powers. Stages such as the graveyard and docks feel really drab and boring to look at when they could help to add some extra intensity to a fight. The roster of fighters stands at around twelve, and there does seem to be a lack of thought and intuition with several fighters. For instance, Vladislav III is easily noticeable as a knock-off Dracula, Zafkiel instantly reminds me of Sonya or Cassie Cage, and Caleb is literally just a werewolf wearing ripped-up belted trousers. I understand that the fighters are based on iconic horror figures, but the developers could’ve added a bit more creativity with the design process. 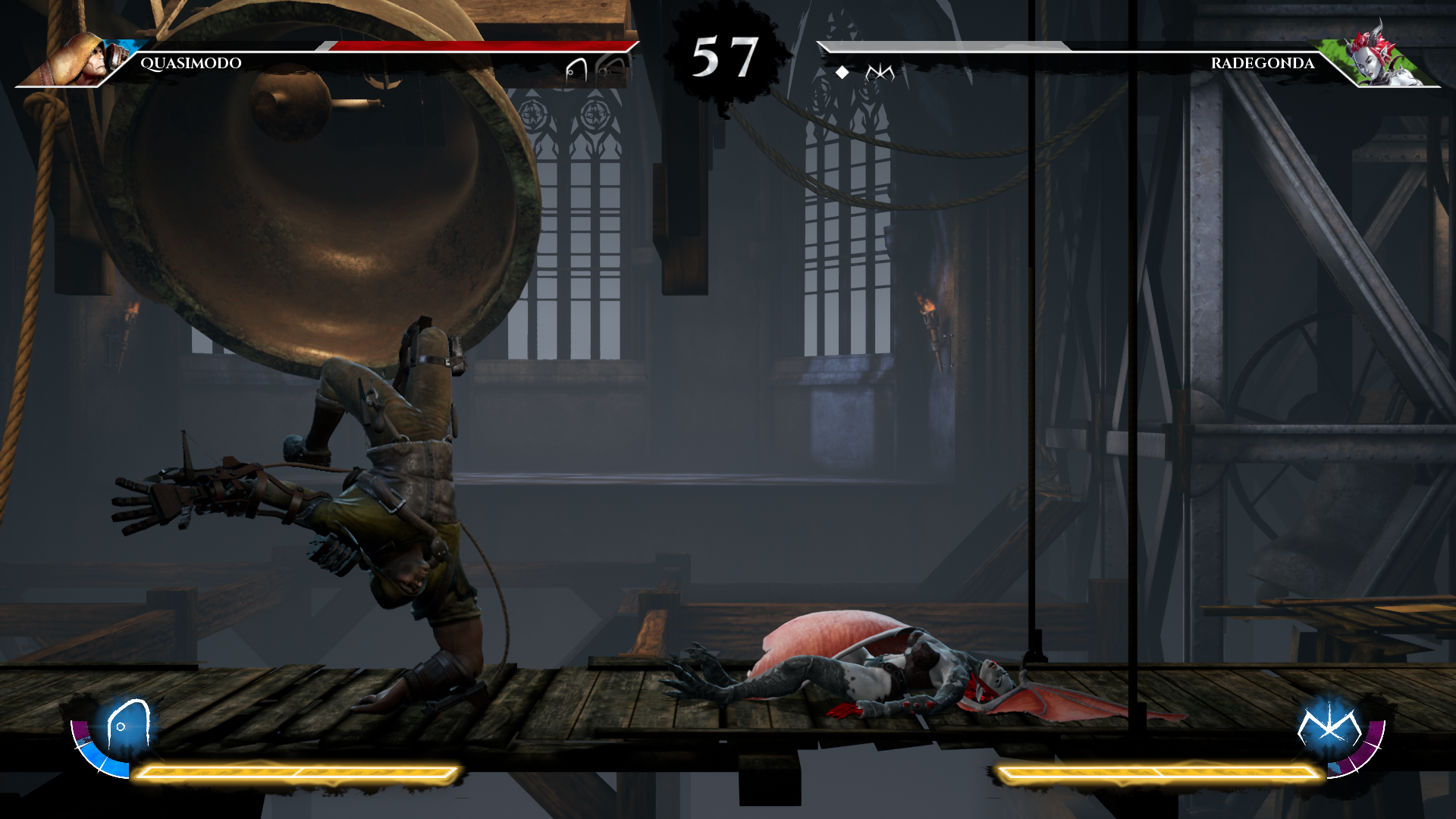 Omen of Sorrow could’ve been a game of excellent potential to become a unique addition to the fighting game genre. However, with a boring combat system, underwhelming animations, questionable lack of audio segments and unintuitive character design, Omen of Sorrow is a game that speaks for itself: sorrowful and disappointing. The soundtrack is great though, right? gaming Respawn’s copy of Omen of Sorrow was provided by the publisher. 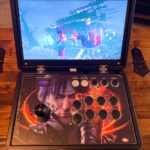 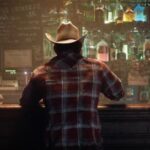