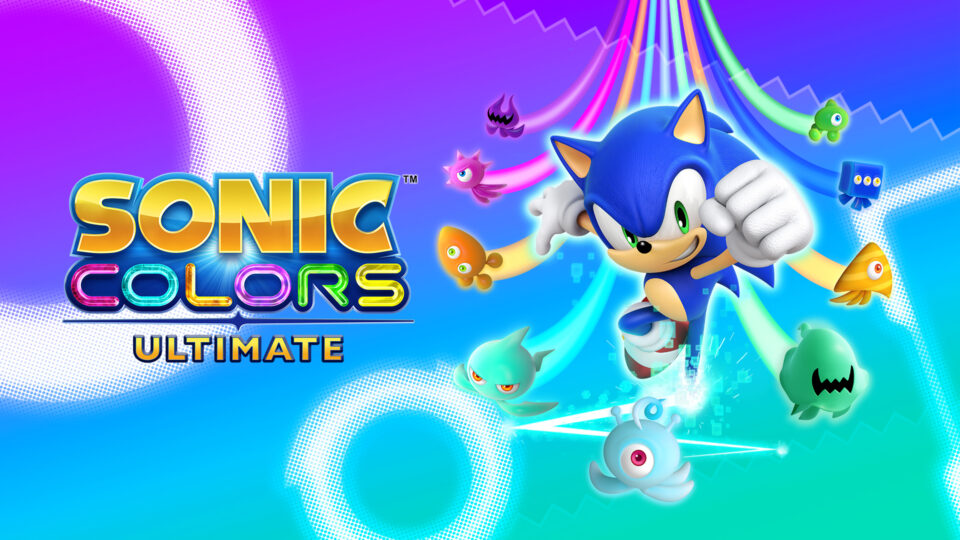 The Blue Blur has had some ups and downs since his creation, but following the fantastic Sonic Adventure for the Sega Dreamcast, Sega proved that a 3D Sonic game would work a treat if handled correctly. Afterwards, there were many subsequent releases of 3D Sonic titles, one of which tried something new. Sonic Unleashed had our guy transform as a Werehog(?) during the night time stages, and it introduced blazing fast rollercoaster stages for the daytime levels. The latter were a massive hit with fans. The Blue Blur himself was right at home zipping through stages at breakneck speeds, wrecking robots and collecting rings. Sega took notice and made a brand-new game based purely on these types of levels. After throwing in some colorful neon aesthetics with a dash of aliens, and we have Sonic Colors. If you didn’t own a Nintendo Wii, however, you missed out as it was a Wii exclusive (not including the meh 3DS game) ……until now. Sonic Colors: Ultimate hits up PS4, Switch, PC and Xbox One, enhancing the game and throwing in some extras to boot. 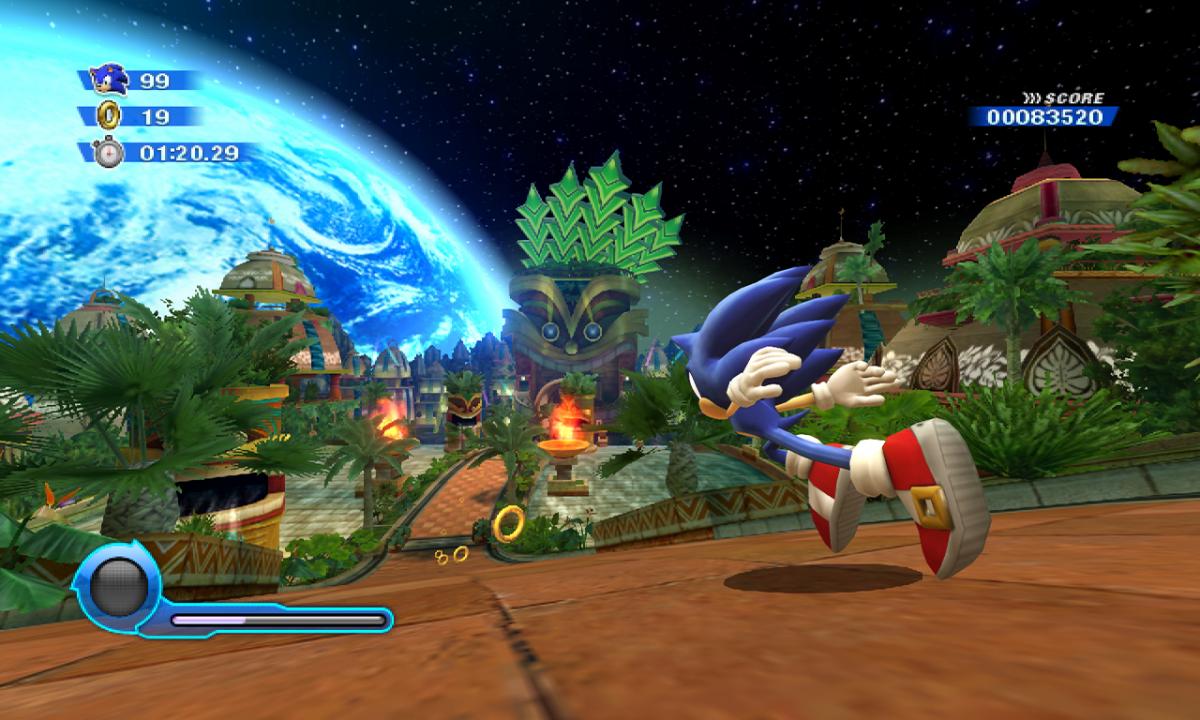 So, Dr. Eggman (or Robotnik) is at it again trying his damndest to take over the universe by using the power of alien lifeforms called Wisps. These shapely bright colored creatures possess special powers and collectively power Eggman’s space amusement park. Of course, this means Sonic and Tails have to ruin everything and trash it by destroying five planets chained together by one in the centre. Well, more-so Sonic. It’s a simple, lighthearted plot designed to give reason for the sequence of high-speed stages Sonic traverses. Sonic simply goes from one area to another taking down Eggman’s robots, meanwhile, Tails amusingly tries his best to create a translator for a Wisp trying hard to tell them what’s going on. The story doesn’t affect the game in any way, except providing watchable cutscenes that chain the park areas together. Sonic Colors: Ultimate hasn’t touched them, unfortunately, as they aren’t enhanced in any way. No 4K visuals here… 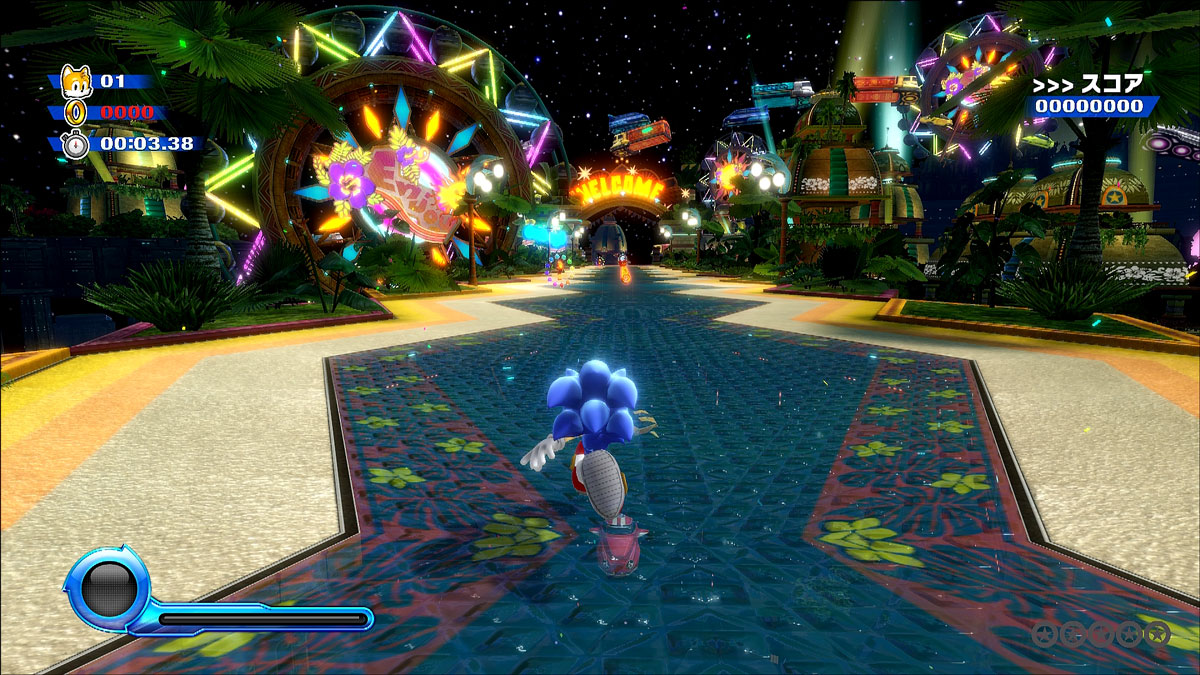 …but then the first stage happens, breaking you, the player, into what’s to come. A short limbering up animation before BOOM! Sonic boosts forth. What ensues is a series of ledges, ramps, loops, the game encouraging you to hold the boost button down to rip through enemies whilst never having a break. It is simply exhilarating. The way Sonic launches down vertical paths, smashes into springboards to transition him from one path to the next, riding grind rails like a jacked-up Tony Hawk, it’s just mind-blowing. Each stage is exactly like this, and it’s enough to keep you playing from start to finish. Doing a donut around an actual donut in Sweet Mountain is something to behold.

It’s not all blazing fast speeds and face-melting exhilaration though. During every level, the momentum is shattered by dreaded platforming parts; bits where Sonic has to jump from ledge to ledge, over pits, performing homing attacks on robots and solving simple puzzles to progress forward. It’s never long before we’re back to tearing it up though. In later levels, these sections become more frequent, like the game is saying “okay, you’ve had your fun, now it’s time to get serious”. Platforming becomes tougher, making you think harder on where to jump too next. Conveniently placed coloured Wisps in red capsules are right where you need them for Sonic to free-up, and doing this grants Sonic that Wisp’s power. The blue Wisp’s laser power allows him to literally be shot forward. There is a short delay allowing you to aim beforehand, which can open up alternate paths. The pink Wisp turns Sonic into a spikey ball that can attach to surfaces. The orange Wisp transforms Sonic into a rocket that blasts vertically, and the yellow Wisp turns him into a drill. There are more, but I wont spoil them for you. These power-ups add a new depth to Sonic Colors: Ultimate, allowing you to explore previously unexplored regions if you didn’t pick that power up. It encourages you to take risks. Blasting up with an orange Wisp may take you to a secret pathway, or it could mean death. 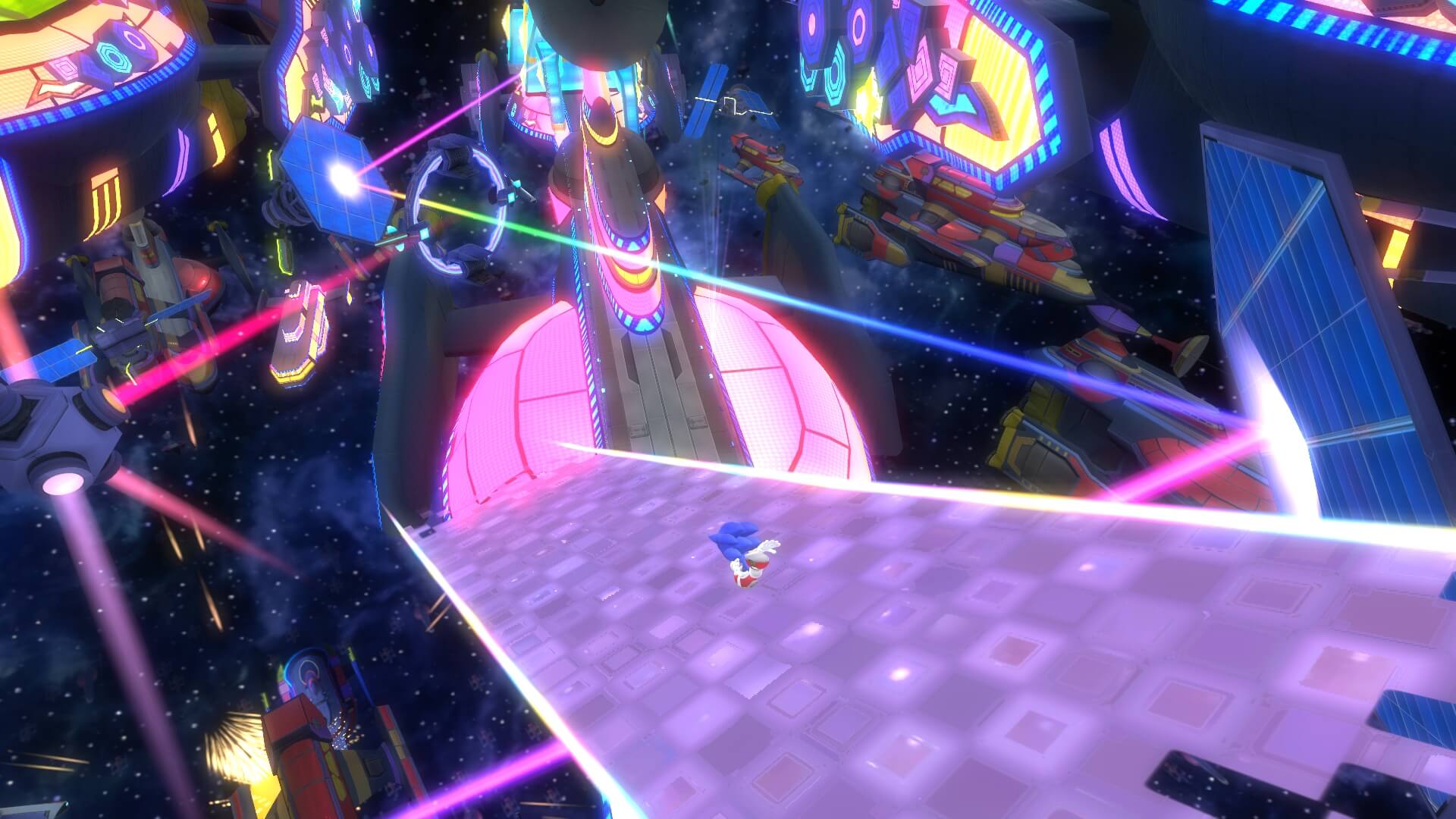 Sonic Colors: Ultimate adds a new Wisp with a new power, the Jade Wisp. This green guy transforms Sonic into a ghost, allowing him to traverse through solid surfaces and also float in any direction for a short amount of time.

Throughout each level, there are numerous collectibles for you to look out for that also encourage you to replay levels to attempt to collect them all. These are red star rings and coins to be used at the Options Satellite, a new area where you can buy cosmetic upgrades for Sonic, such as different colored gloves, shoes, changing his aura colour and more. Sega has even included items from the Sonic movie, such as his boost effect and the light effects in his spikes, which is very cool (also, go see the movie if you haven’t already). 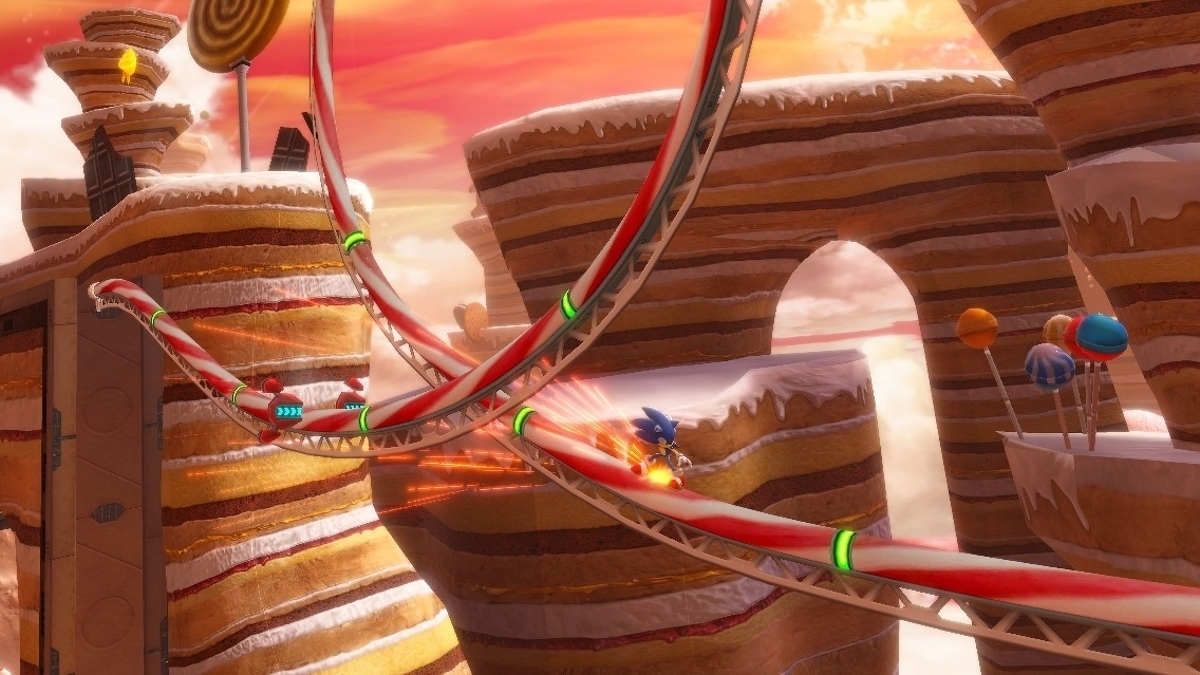 Other new additions to Sonic Colors: Ultimate are Rival Rush Mode, where you must go up against Metal Sonic in a series of stages to gain rewards. A massive overhaul of the visuals and frame-rate enable full 4k support and 60 frames-per-second without even breaking a sweat. Tails Saves have been added to be found throughout levels, meaning Tails saves you when you fall off the stage and puts you back where you fell without losing a life; what a cool little guy. Little changes like rainbow ring design, soundtrack changes and so much more have been added too. This is no doubt the ultimate version of Sonic Colors.

A tacked-on co-op mode remains in Sonic Colors: Ultimate, the Game Land. Set out like a retro handheld games console, this world is just a series of monotonous levels where players can play as two different coloured Sonics to get to the end of each level. More levels open up with more Red Star rings you collect throughout the game. This is a purely latched on mode, I’d be very surprised if anyone actually played this. 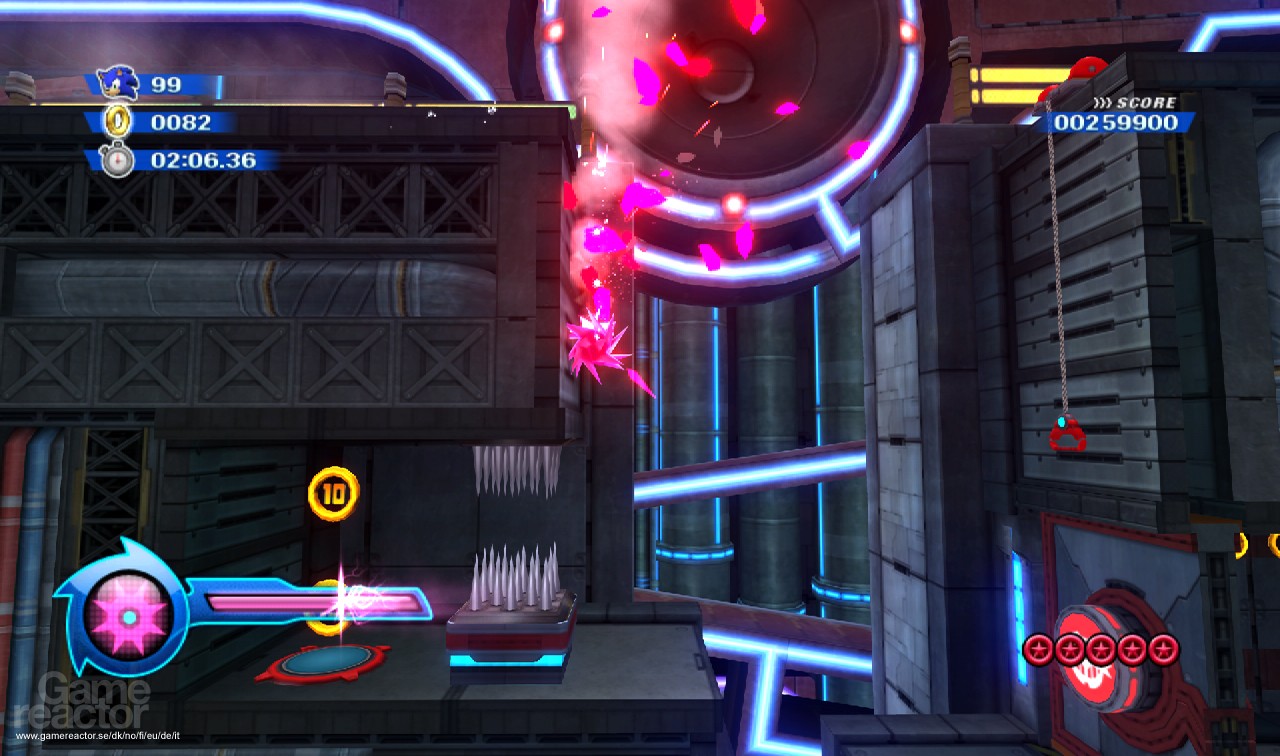 So, Sonic Colors: Ultimate hits up modern consoles, and it can only be described as a rollercoaster from start to finish. If you missed out when it was released back in 2010, you’re in for a treat with Ultimate. A massive haul of improvements that make all the difference in a Sonic game, the silky-smooth frame-rate and the treasure trove of new additions make this a must-play. 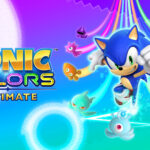 Gaming Respawn’s copy of Sonic Colors: Ultimate was provided by the publisher. 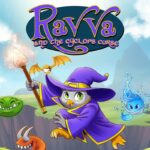 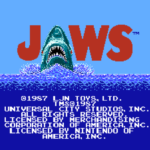