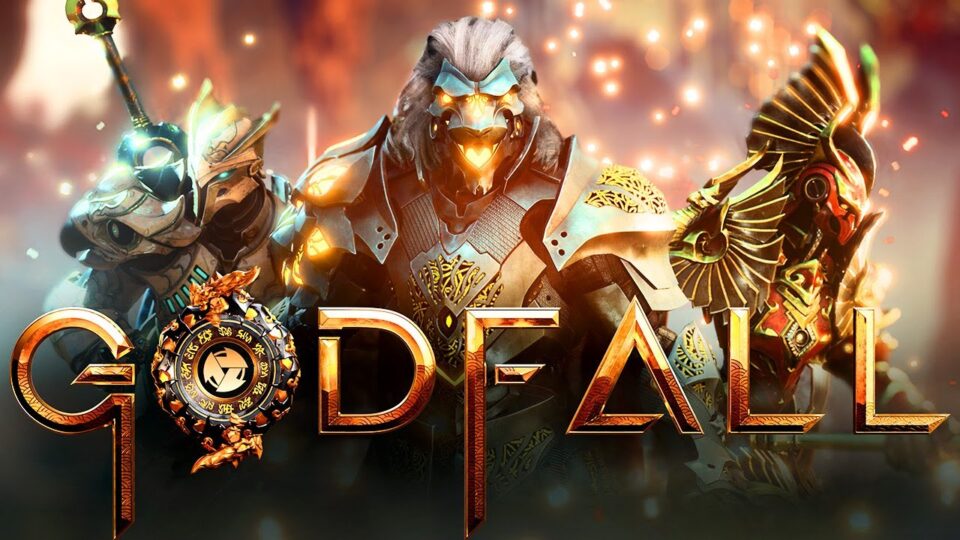 There’s always that one game that sticks out in my head when I think of console launch titles; not the game I remember for being the best of the bunch, it’s the one that I think very few people would buy. One game that epitomizes this in my mind is Knack, a PS4 launch title that has become quite the meme. The game sold well enough to warrant a sequel, and I would chalk that down to it releasing the same day as the PS4. Godfall I think fits this bracket. Where Knack was a serviceable 3D action-platformer, Godfall is a serviceable ‘looter-slasher’ that I think will only see sales due to it launching on the PS5.

Our protagonist, Orin, is one of the remaining Valorian knights. After a battle against his brother and the game’s antagonist, Macros, Orin has to stop Macros from becoming too powerful and destroying the land. You can see from that previous sentence that Godfall’s story is as generic as they come. I genuinely had no interest in it whatsoever. I finished the game about 12 hours ago, and I was struggling to recall any of it. 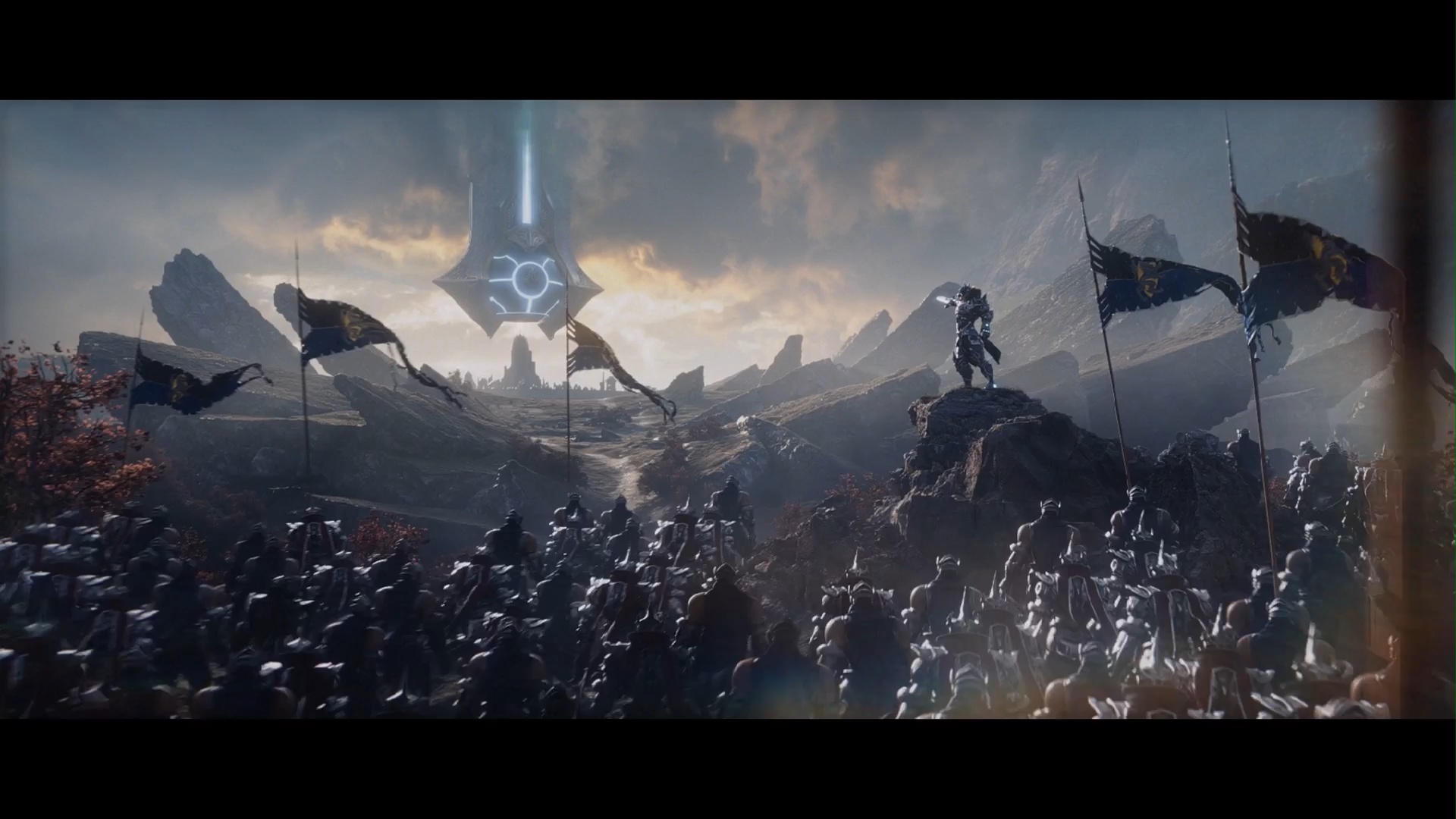 The story is delivered through dialogue by two characters: The Seventh Sanctum, who acts as your guide throughout the game, and the only other NPC, Zenum, whose attempt at humour had me laughing due to how badly his lines were written and delivered. For me, however, I have no issue with the story being bad. When I come to play an ARPG, I want as much action as I can possibly get

Godfall technically looks good. The areas are really vibrant, the texture work is crisp and the animations are smooth. I just can’t help but think that it’s a bit generic. If you gave 12-year-old me a pen and paper and asked me to design some armour and weapons, I’d imagine you would’ve received a very poorly drawn version of the gear on show in Godfall. Everything in Godfall shines, and I mean everything. The effect is nice to look at, but when every single armour set, weapon, enemy, pot, you name it shines, the visuals start to blend together. 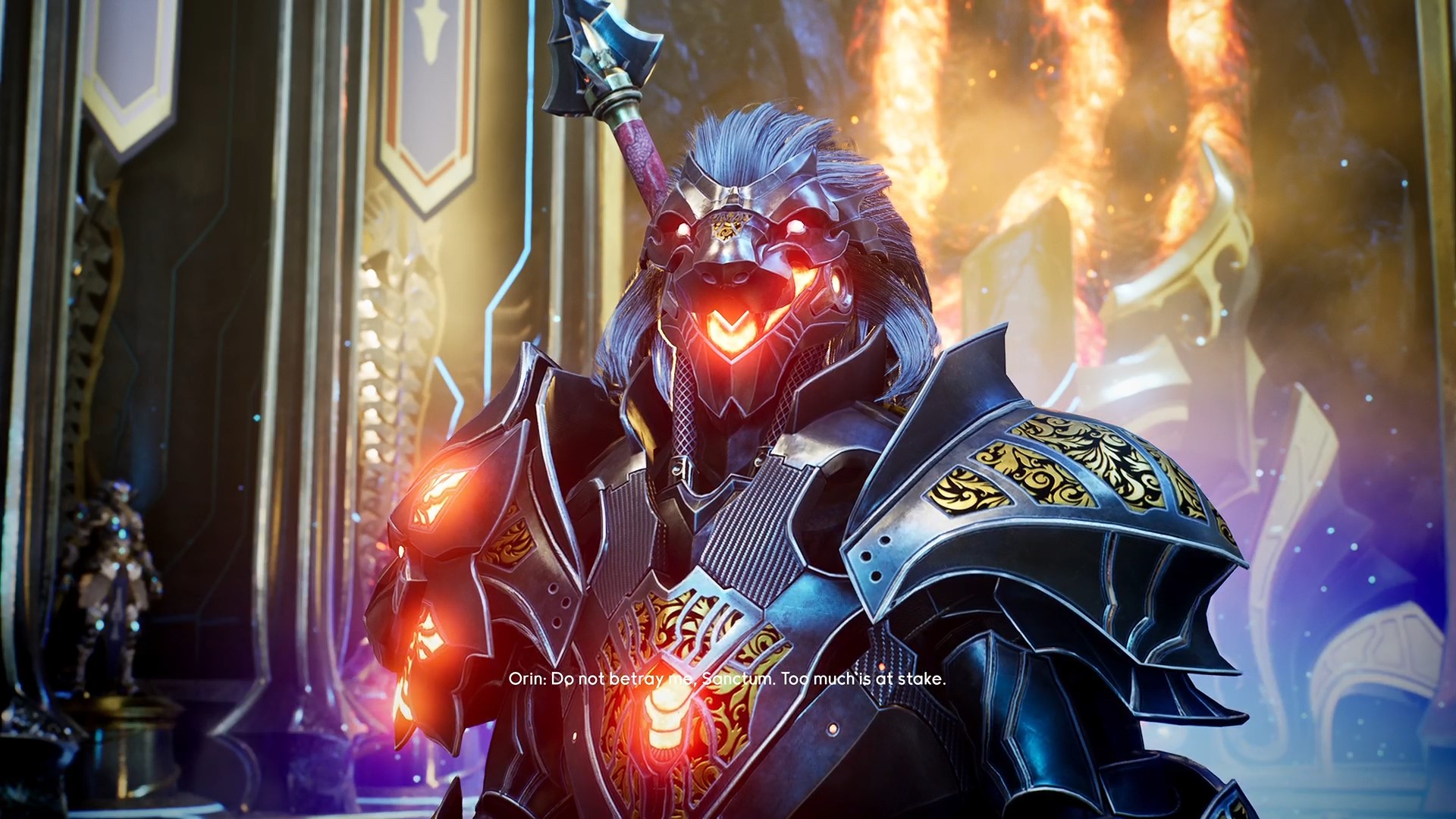 In the marketing material, Godfall is labeled as a ‘looter-slasher’, another sub-genre within a sub-genre to make things more confusing, but I digress. You can expect a watered-down version of any other ARPG, like Torchlight or Borderlands, two series that I absolutely adore. As a result of my love for the genre, I did manage to find some fun hidden in Godfall. The structure of the game is really simple: go to the hub, choose a mission, then go off looting and slashing to your heart’s content until you finish the admittedly short missions. These consist of Destiny-style patrols, bounty hunts, gauntlet-style missions, and then story missions that typically have you going from point A to B killing enemies until you complete a very basic task. 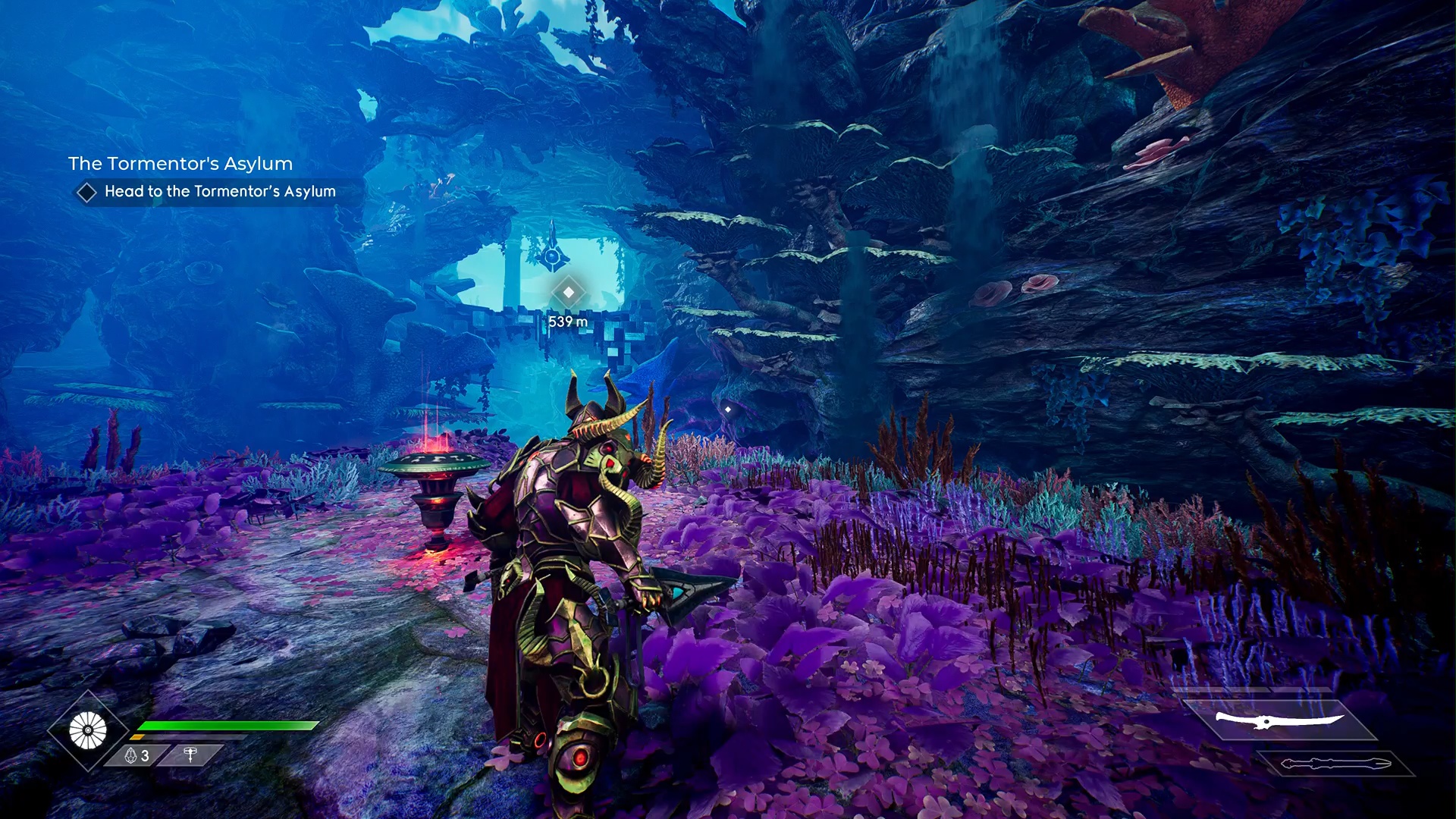 While the missions were pretty bland, the game was never shy about giving rewards. Exploring the areas would net you plenty of benefits with tough enemies, chests, and bosses that would spew loot upon death. I was regularly sifting through my inventory looking for the next best weapon to make me that slight bit extra stronger. There are 5 different types of weapons in Godfall, and they added a nice bit of variety to the gameplay, each with their own attack combos and weapon techniques; my favourites being the Greatsword and Dual Blades. Weapons are your typical incremental upgrades, some dealing elemental damage that could inflict status effects on enemies.

Just like pretty much everything in Godfall, combat is what shines from a gameplay standpoint. A mixture of 2018’s God of War and Kingdoms of Amalur: Reckoning, I had the most fun carving through waves of enemies with my legendary Greatsword. Each weapon has techniques that can be unleashed with L2+R1 or R2. On top of this, there are upgrades in the skill tree to unlock new attack abilities, like an arcing shield throw or a shield slam. It’s not the most in-depth combat system, but there are a few things like stagger meters and soul shatter, which is a way to destroy an enemy’s health bar with alternating heavy and light attacks. 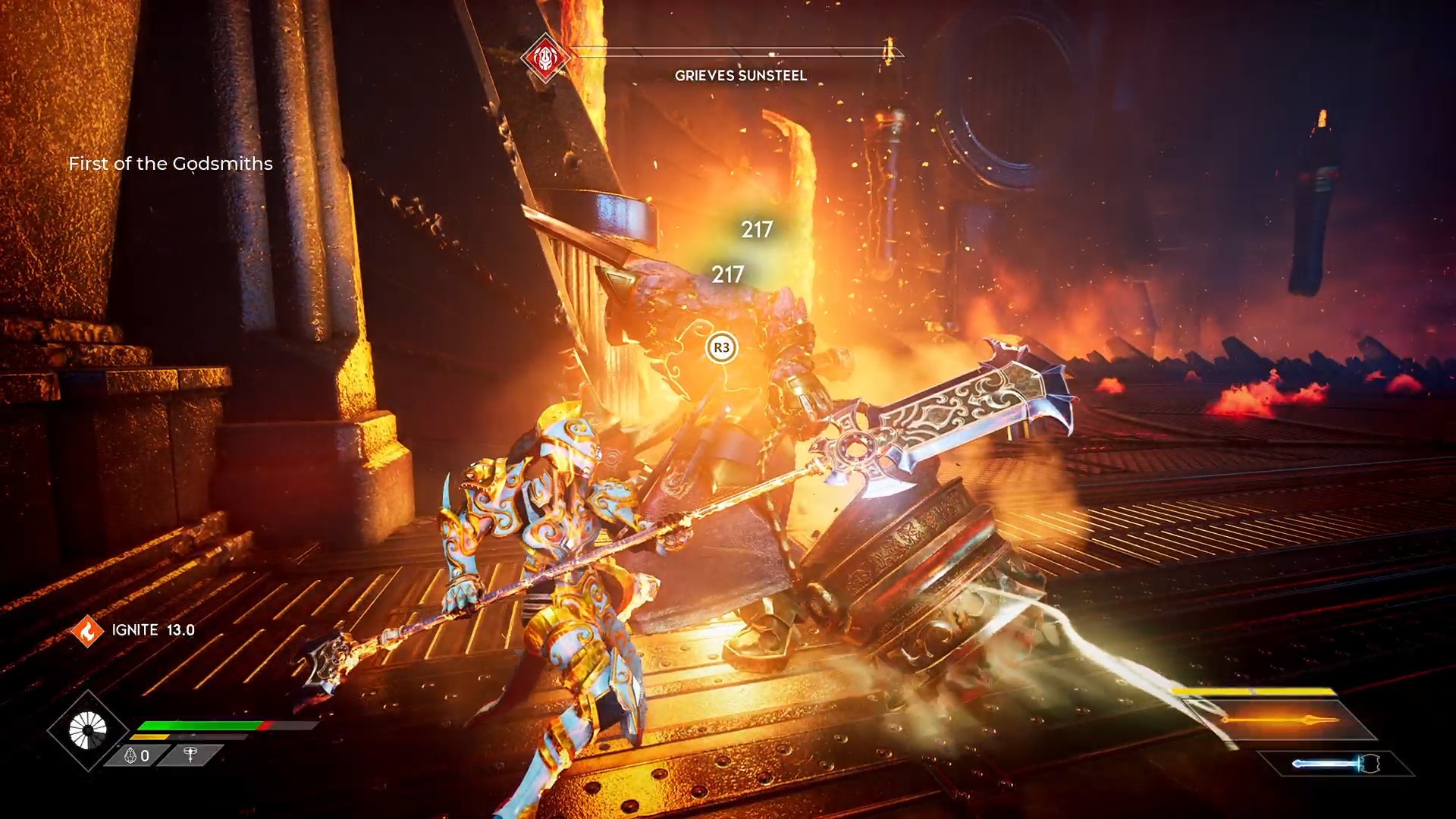 Again, character progression is pretty standard. You gain skill points from leveling up and as rewards for beating certain missions. Some of the upgrades are great, adding new special abilities and augmenting existing abilities, like the shield throw. The others aren’t as exciting, such as increased critical chance and things of that nature. There are 3 main stats: Vitality, Might, and Spirit. I built my character around Spirit, which meant I dealt an insane amount of damage with my abilities and weapon techniques. I could definitely feel the increased damage as I leveled. Might increases damage with normal attacks, so my attack combos did comparatively less damage than my abilities. I didn’t really pay attention to Vitality as I didn’t find the game too difficult until the endgame.

Once you run through the main story (and a few side objectives), you finally unlock the endgame, which for the short time I spent with it, was completely underwhelming. Now, admittedly I didn’t delve too deep into this, but I was never compelled to min/max my build, and as a result, I wasn’t too bothered with the endgame. It has a roguelite vibe to it, which I typically love, but the lack of any innovation or incentive made the post-game content lackluster, to say the least. You pick a boss to fight and have to complete randomly generated instanced levels before the boss, which add modifiers to your runs, like extra resistance to elements or more critical chance. The main benefit to this is that if you do really enjoy the gameplay loop and want to min/max your build, then the randomly generated content will hopefully keep you invested, but that wasn’t the case for me. 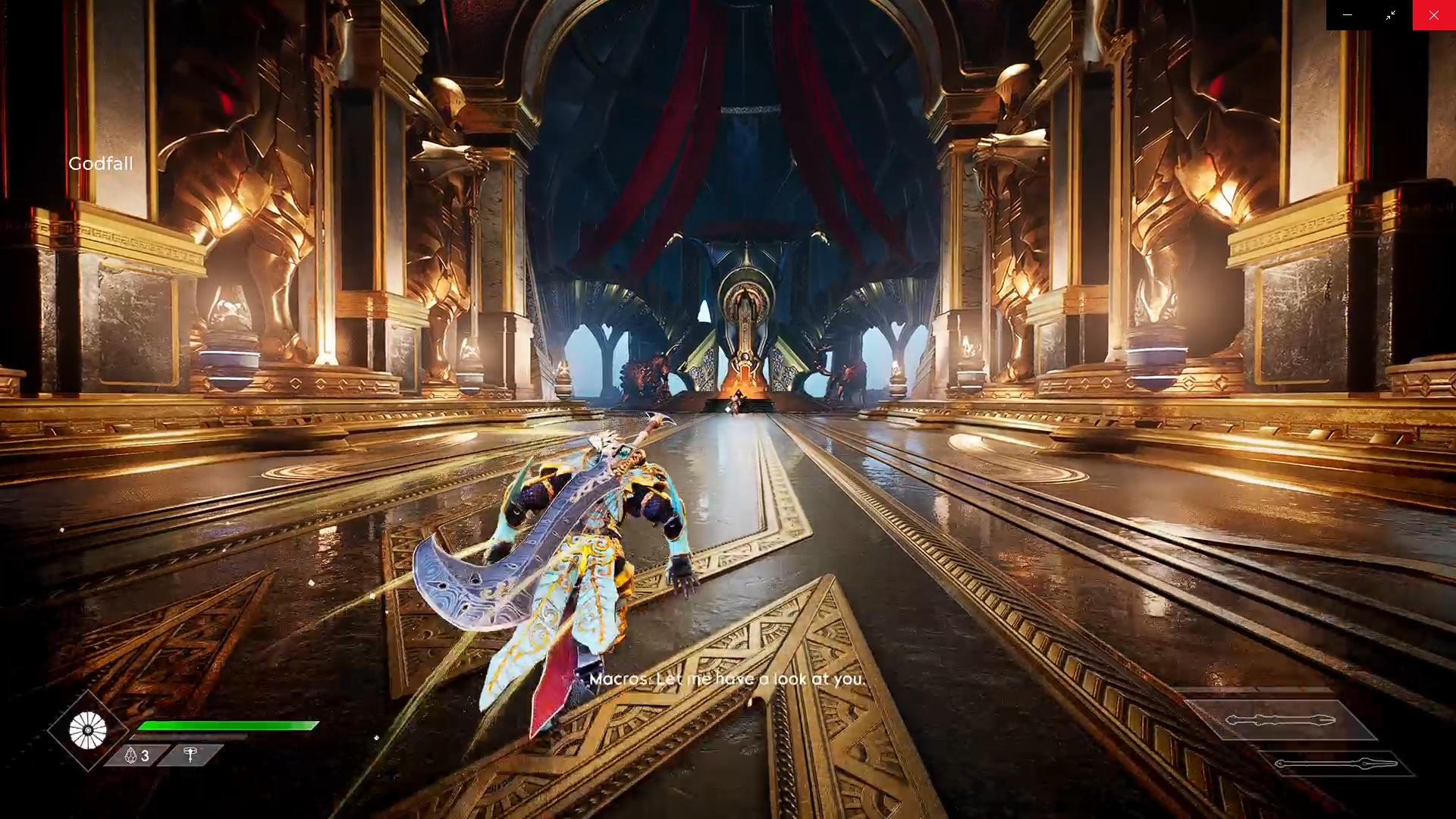 Godfall feels generic, but other games have succeeded despite this. I’m reminded of Warframe, a game I have never played but that looks quite generic from a presentation standpoint. Warframe had a rocky start, but now it is consistently one of the most popular live-service games around. I’m really hoping with some extra content that Godfall can carve a place into the oversaturated market. I had a lot of fun with the combat, but I think the game would’ve benefited from an early access period. With a year in early access, Counterplay Games could’ve ironed out problems with the game’s endgame, added more areas and variety to missions and enticed people with a lower price point. This game is nowhere near worth $80, so if you are curious, I would wait until it drops to $30/$40. 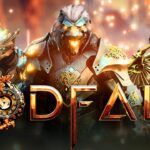 Gaming Respawn’s copy of Godfall was provided by the publisher. 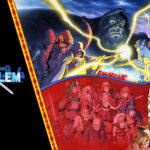 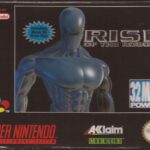