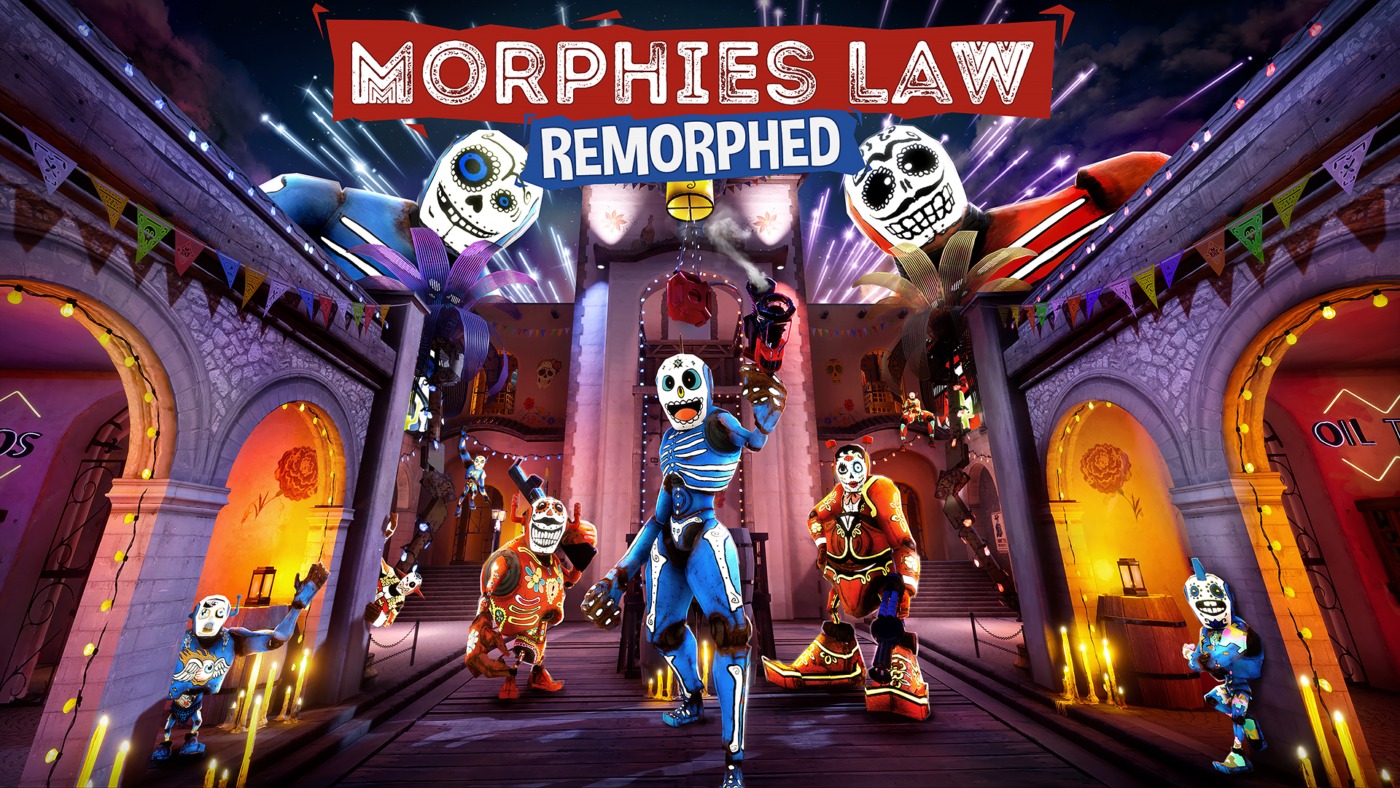 Morphies Law has been out for some time now on the Switch (and PC), and it was one of my first purchases from the eShop. Well, now there is an updated version available called ‘Morphies Law: Remorphed’, and if you already own a copy, the download is free. As I haven’t reviewed this yet, I thought I’d give it another go with the updates. If you’re unfamiliar, Morphies Law: Remorphed by Cosmoscope GmbH, it is a deathmatch-styled multiplayer game, much like Fortnite but without as many weapons or players. That’s not necessarily a bad thing though. All the modes in the game are team led – red vs blue – and you take command of a robot with the influence of a Day of the Dead festival aesthetic that you can customise in many ways.

In a third-person perspective, you dash around the maps shooting your enemies in a series of the standard deathmatch, capture the flag and other modes. The more kills you get, the more XP you earn, along with the opportunity to unlock lots of new goodies to customise your character both in appearance and with several feats that help you in-game. 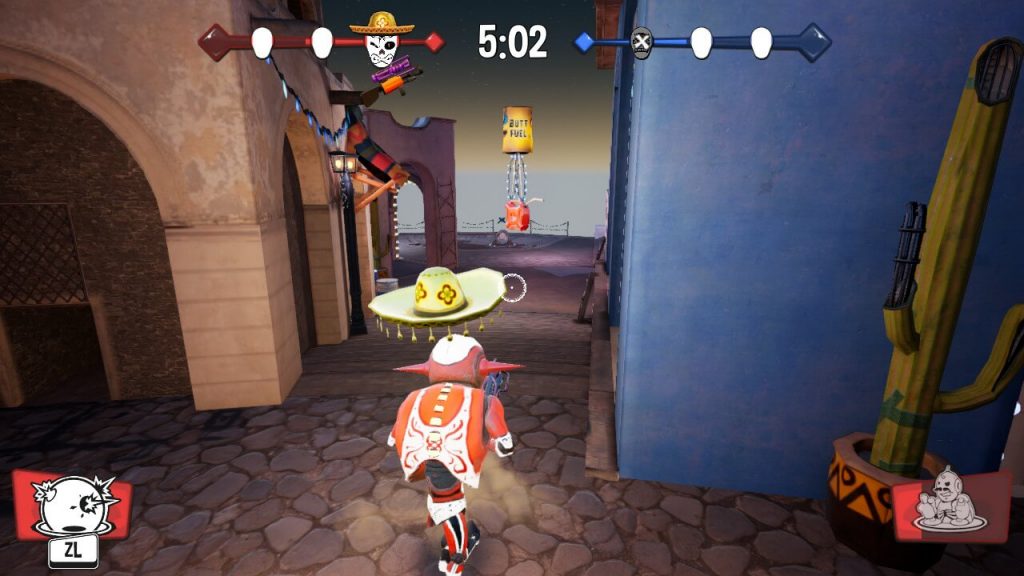 Now, here’s Morphies Law: Remorphed’s unique selling point: Each time you hit an opponent’s limb, that body part decreases in while your corresponding body part expands. Depending on your accuracy, you can balance this out and become a giant of sorts. It makes you a bit overpowered, but the fairness is levelled out well as being bigger makes you an easier target to hit, plus you’re a bit slower. On the other hand, get repeatedly shot, and you become smaller – making you challenging to hit and swifter in mobility.

This dynamic has very comical results. In an ideal world, we’d all be running around with big heads as all of us are headshot masters, right? Well, no, not really. You’ll often find that you have a normal-sized head, one massive arm and a huge arse. It’s certainly unique. Overall, the physics work well, and I’ve yet to play a game in the same model.

You really can stand out in Morphies Law: Remorphed – not just because of your out of proportion body, but also because you can customise your face and body to an almost unlimited degree. If you’re like me, customising a character is often a separate game for me, and I could spend hours faffing about. At first, you are a bit limited to what you can change though, so you need to play through the levels to unlock new items. 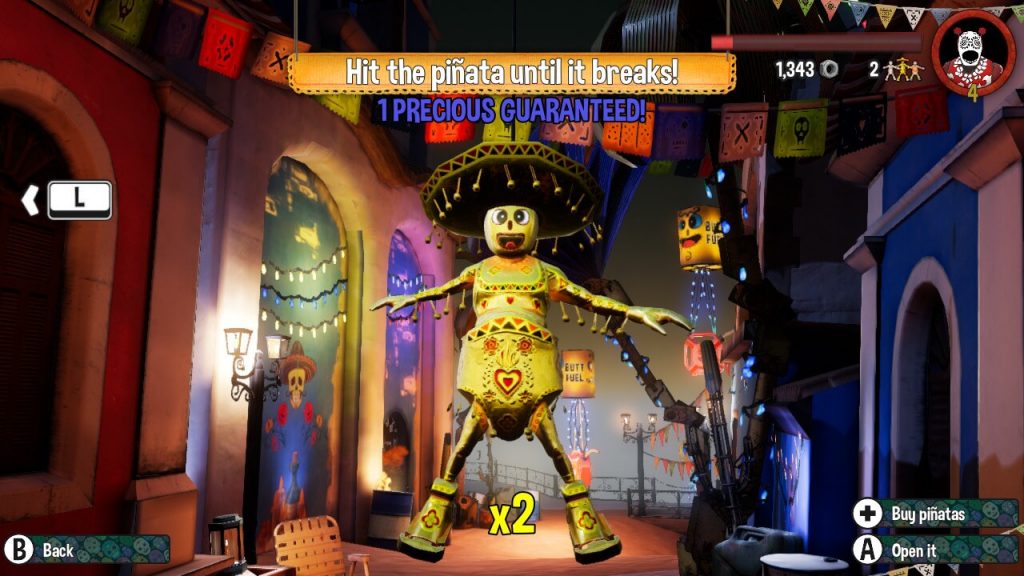 As mentioned, you can boost your XP through each game and are awarded parts to tinker with your robot. Between matches, you can receive loot in the form of a pinata. Bash it a few times, and you’ll win some goodies, such as a new robot moustache or random body part. I’m not sure if they were present before the update, but there are instruments in the game, such as guitars and whistles. These are mostly gimmicks to replace the good old days of teabagging in Halo and annoy other players. The more noticeable addition would be the ultimorphs. When you steal mass from your opponent, the ultimorph charges up. When at its maximum, you can take control of your avatar (your bot). This means you can pull off a devastating attack or put up a protection barrier for allies.

Going on the Line

Morphies Law originally had criticism for lag and technical errors when playing online. Being a bit anti-social, this didn’t bother me as I mostly played locally either on my own or with whomever I could rope into a match. I did play a few online rounds though, and from my experience, I never had an issue. My only real niggle would have been the lack of players to match up with, but hopefully, with a bit of exposure and new features, this may change.

In terms of updates, the first thing I noticed (other than the title screen) was the new daily missions and weekly progress screens. Morphies Law: Remorphed this time around gives a bit more incentive to play it more as it was a bit of a grind to unlock new items the first time. Now you have challenges like ‘killing 6 enemies without dying’ or ‘donate the most mass in 6 games’.

Like Fortnite, there are a few emotes that you can unlock through playing the game or through in-app purchases. Depending on how much you play the game, you don’t need the latter unless you want to accelerate your progress. I’m not a fan of this method, but it’s entirely optional. Emotes and other items are also your rewards through the pinata section. I did notice some slowdown on the animation here, but it’s not in-game, so no deal-breaker. 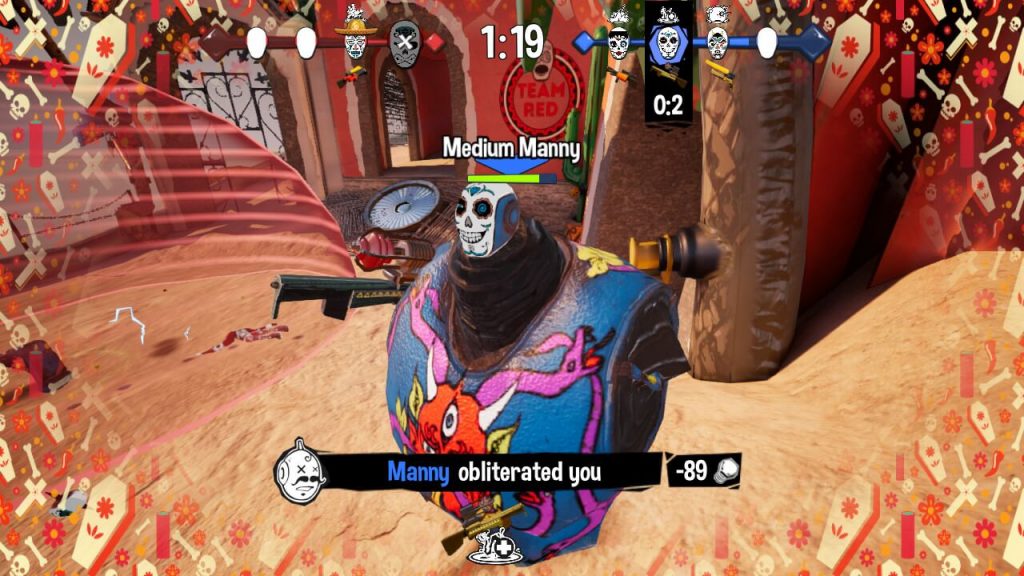 In terms of controls, it’s a standard setup and quite straightforward to navigate your bot: left analogue for movement, right for looking around and trigger buttons. When you progress, you have access to a few more actions, such as a shield and a gun that shoots the colour of your team on the floor, kind of like Splatoon, but when the enemy approaches, they slide all over, allowing you to take them out.

There’s enough variety to keep you going, but at its heart this is a multiplayer game, so its lasting appeal inevitably comes down to having enough people to play the game with. Of course, on the Switch, we don’t have the same chat function as other platforms, so it isn’t as interactive as it could be. That said, I prefer that, but it’s up to you. Did you buy a Switch for online play?

It still does take a bit of time to level up like before, but there are a lot more options in the game. Again, I didn’t get this to play online, but when I tried it out for some rounds, everything was as smooth as expected. I didn’t experience any lag or frame dropping. The matchmaking did take some time though. I often found that the timer would run out before there was a full house of players. 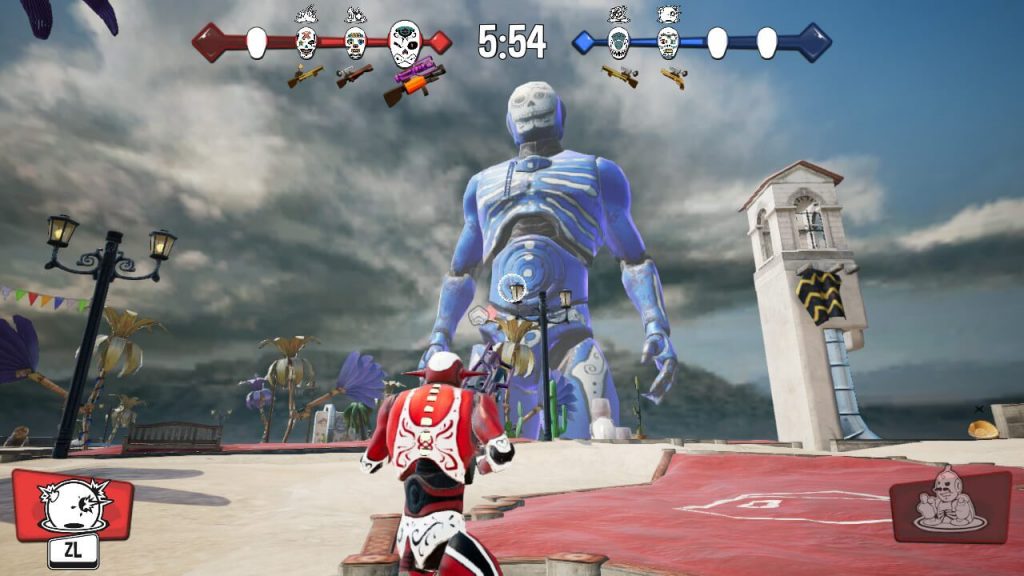 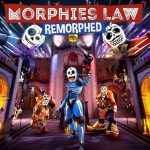 Still very much the same game without reinventing the wheel, Morphies Law: Remorphed is a fun and quirky multiplayer game. It's unlikely to be replacing Fortnite anytime soon, but it does warrant a chance. Again, I didn't experience any technical issues, but the game-changer will be down to the number of people playing the game.

Do you agree with our review of Morphies Law: Remorphed? What are your thoughts? Tell us in the comments below. 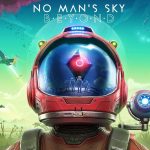 No Man’s Sky: Beyond Review 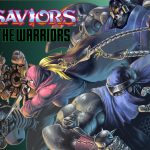 The Ninja Saviors: Return of the Warriors Review