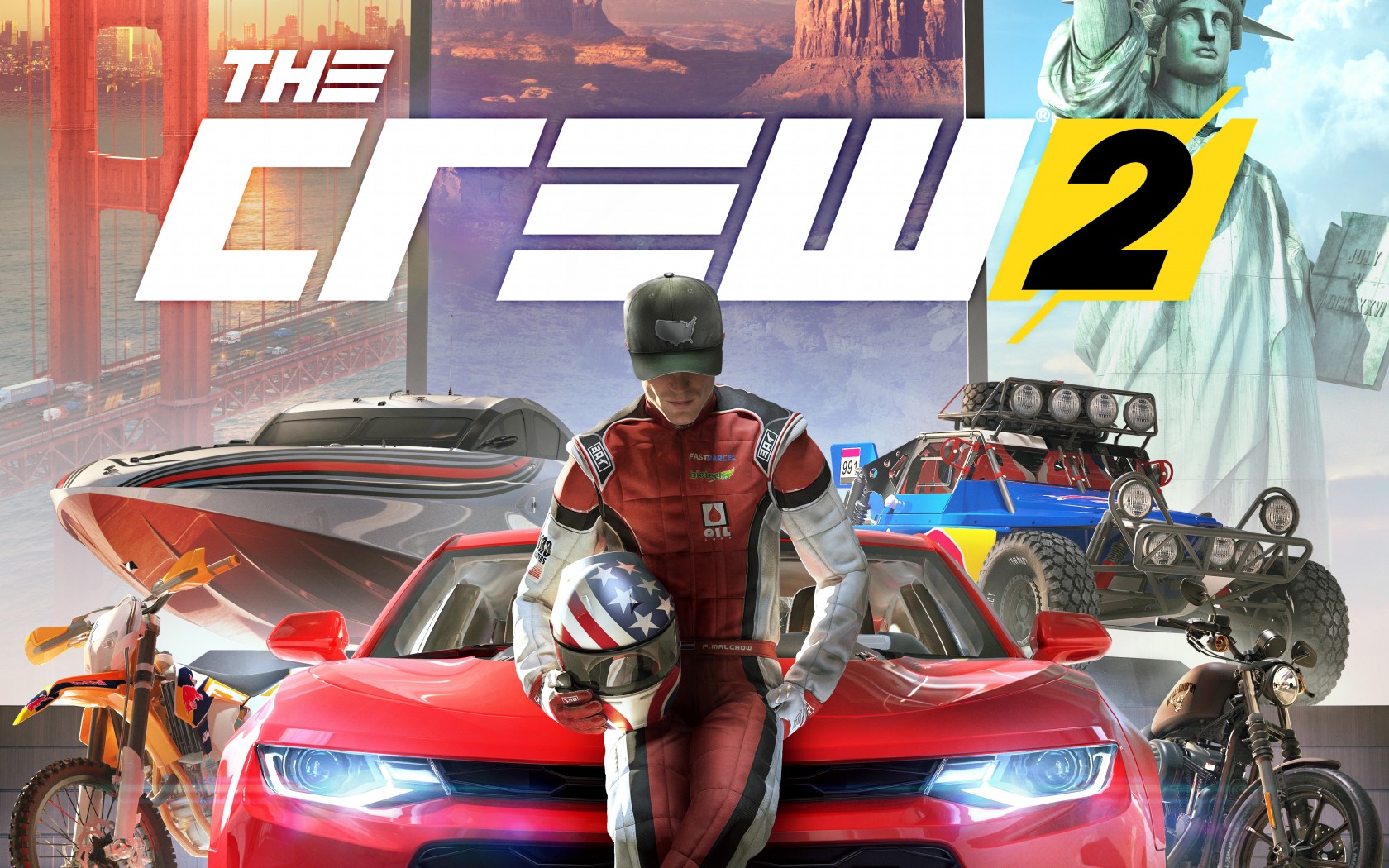 There’s something gloriously bonkers about the central mechanic in The Crew 2, with a few clicks of the right analog stick switching between car, boat, and plane. It’s the ultimate expression of the freedom that runs through the whole game, with the entire (scaled-down) U.S. presented as your motorsports playground, and everything from monster trucks to powerboats available to be raced and messed around with.

Throughout there’s a sense that this is a sequel with everything turned to 11, there are more vehicles, more tracks, and lots more crazy. Crucially, there’s also a clear structure that never leaves you in any doubt about what to do next and doesn’t drown you in menus or stats. Fundamentally, The Crew 2 revolves around two things, followers and bucks, with the former obvious and the latter being the game’s version of money. The more races you win and cool stuff you do in the game’s sprawling freedrive mode, the more followers you get and the more your reputation increases. This opens up more races and events, which reward you with bucks, bucks you then spend on buying new vehicles to take part in those events. And that’s pretty much it, except for the fact that winning races also gives you parts to upgrade your vehicles, and you can spend bucks on changing the look of your driver and car/motorbike/boat/plane/whatever. 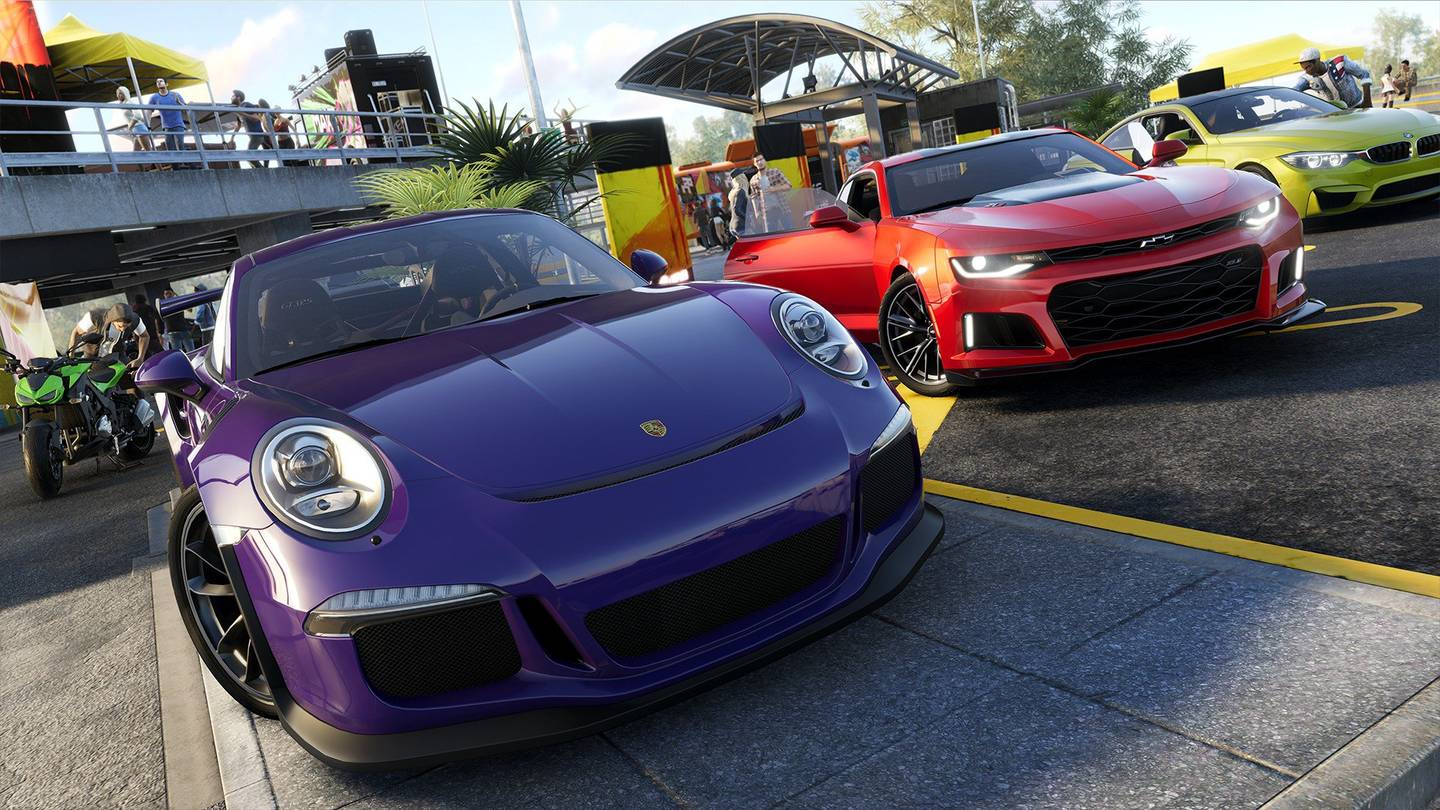 There’s a loose story underpinning all this, but it’s all basically an excuse to master as many different vehicles as possible, and the variety is staggering. You’ll start off racing sports cars on street courses full of jumps, shortcuts and traffic to dodge, move on to tight motorcross tracks on dirt bikes, off-road point to point challenges in buggies and trucks, rack up points in monster truck events that are set in super-sized skate parks and play like oversized Tony Hawk’s levels, slide round corners sideways in drift challenges, compete in quarter mile drag races, and, eventually, race hypercars from city to city in epic battles that are typically 20 minutes long. There are also touring cars and F1 cars if you fancy burning rubber on an actual race track. On water, you’ll have the choice of powerboats or the hyper manoeuvrable jetsprint boats, flat-bottomed vessels that can turn on a sixpence and zip over small bits of land. Finally, in the sky, you’ll either be looping, rolling and generally mucking about in special aerobatics propeller planes or hopping into a jet plane and taking part in air races that will have you twisting and turning to meet the requirements of each gate. All of this comes together in Live races, which resemble motorsports triathlons that include land, air, and sea sections, and come complete with an excitable American commentator.

Given this variety, it’s tempting to think that Ivory Tower (the French developers of The Crew 2) have simply thrown everything at the wall to see what sticks, but there’s actually a pleasing level of quality no matter what you pick. Now, that doesn’t mean that the events stand up to the very best in the genre (street races, for example, never feel quite as tight and slick as in the Burnout series), rather they’re all fun to play and provide a decent arcade challenge. Generally, The Crew 2 is at its strongest when it’s doing things that aren’t done very often in other games, like the aforementioned monster truck events, powerboat races, or aerobatics challenges. The other obvious criticism is that despite The Crew 2 essentially being an MMO, there’s no PVP multiplayer, with your interactions with other players limited to joining them in a crew or seeing them fly or drive past you in freedrive. This omission never particularly bothered me, but it’s definitely an odd decision. 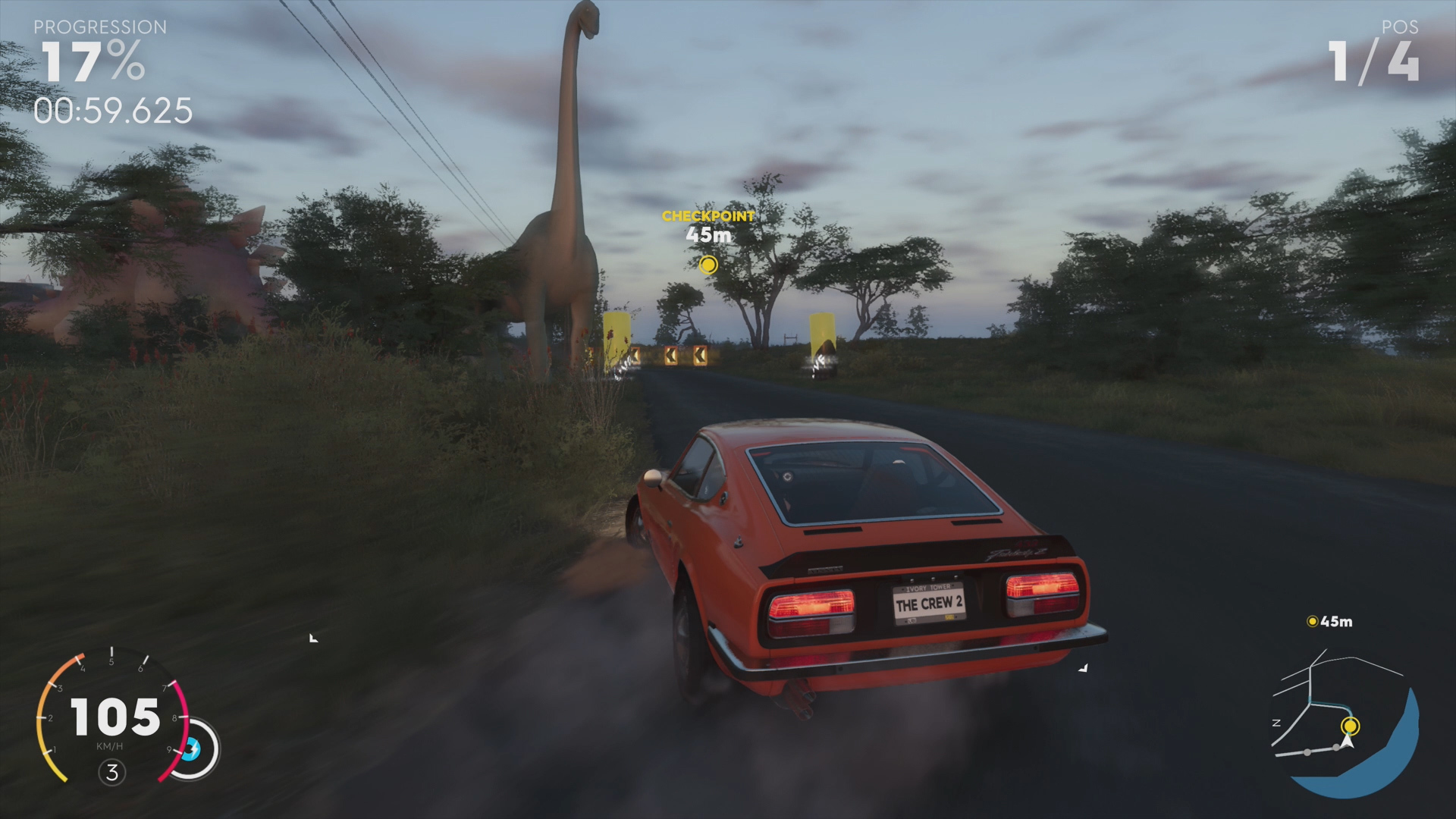 It helps enormously that The Crew 2 generally looks, as my autocorrect would say, ducking amazing, with the licensed vehicles looking solid and polished, and a dynamic day/night and weather system producing some truly stunning moments. This is best experienced in freedrive, which allows you to fully explore the massive game world and hit almost every tourist spot in the US, from the Golden Gate Bridge and Statue of Liberty to Mount Rushmore and the Florida Everglades. Generally, you’ll simply fast travel from event to event but, if you’ve got the time, it’s worth simply going for a drive. Importantly, you never feel like you’re wasting your time as freedrive lets you gain followers for doing stuff you’d probably do anyway, like loops and rolls in planes, or jumps and weaving in and out of traffic in cars. There are also photo challenges, which give you both bucks and followers for entering photo mode and snapping pics of animals, landmarks and your vehicle performing special feats, like a donut in Times Square. The point is this: This is a beautiful, diverse open world with a truly impressive size (one coast to coast drive from L.A. to New York took me over 40 minutes, and that was without getting sidetracked by the photo mode opportunities encountered along the way) that both does a great job of conveying the enormity of the U.S. and is also a great place to simply explore. It also does wonderful things with light, capturing dusk and sunset beautifully, as well as little moments, like the sun streaming through the trees or bouncing off gleaming bonnets. In a plane, The Crew 2 often looks sensational, with the odd moment of pop-in failing to puncture the amazing feeling of soaring over skyscrapers and getting so high you start to see the curve of the Earth on the horizon.

It’s a real shame that this comes with a caveat, but it does; all this visual showing off can be really annoying in races as it’s sometimes hard to see where you need to go and what’s land and what’s water. It’s not a game-breaking issue, but it is annoying and can’t always be overcome by using multiple camera angles.

Your soundtrack to all this racing and exploring is a mix of indie rock, electronica and hip hop, with highlights including The Black Keys and Black Rebel Motorcycle Club. Personally, I’d have thrown a bit of classic rock into the mix too, but it’s generally got a decent amount of variety, and it’s easy to skip tracks via a pop-up menu that also allows you to abort or retry your event. Oh, and if engine noise and squealing tyres are your thing, then you can always turn the radio off altogether. 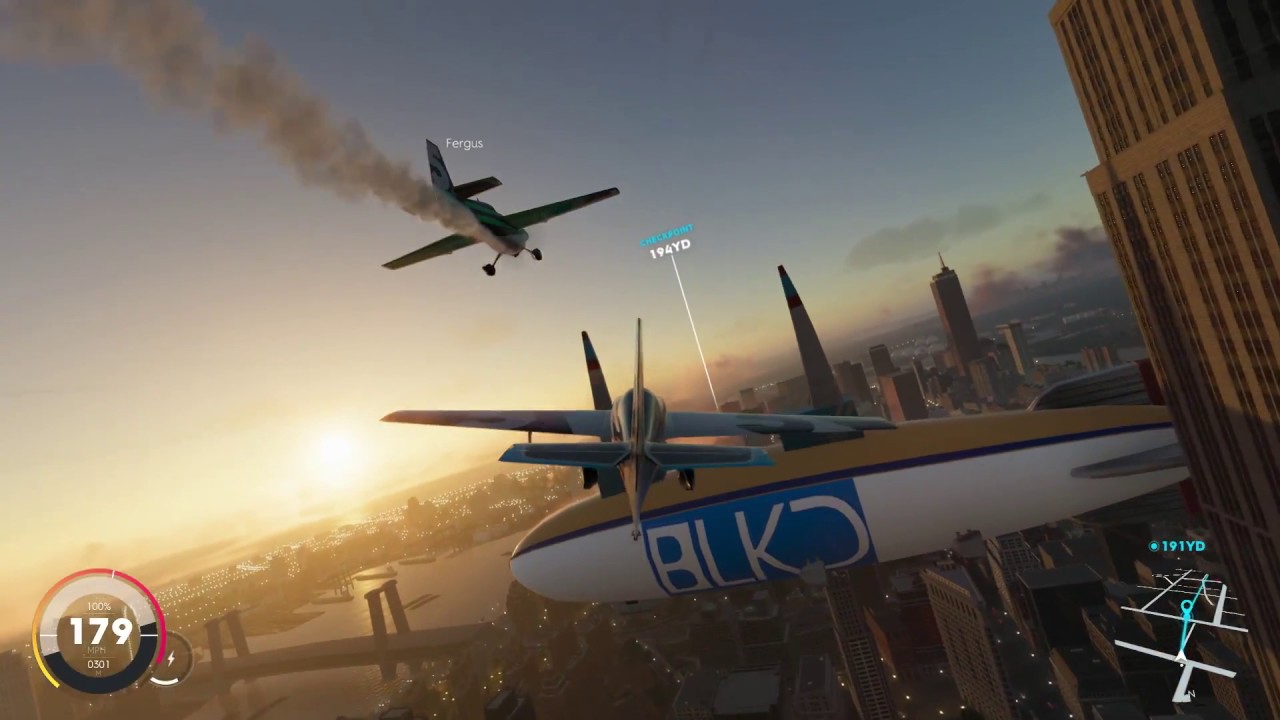 As you’ve probably gathered, there’s a lot going on in The Crew 2, with a plethora of events punctuated by a freedrive mode that lets you drive, fly or boat your way across the U.S. What’s truly remarkable, then, is how seamless it all feels, picking an event is simply a matter of bringing up the map, panning over and pressing X, with the camera then zooming in to your chosen location and switching your vehicle as appropriate. That map is a thing of beauty, it initially shows a sort of model scale approximation of the game world, with zooming out revealing the world as a grid of streetlights and highways before finally switching to a normal map that’s full of icons and that can be filtered as you wish. The events themselves are colour-coded according to which “family” they belong in (pro racing, street racing, and freestyle), with incomplete events flashing to attract your attention. Each event also has a recommended level so you’ll know what sort of challenge you should expect and whether you should upgrade your car a bit first. Basically, the UI does what all good UIs should do, it tells you everything you need to know without drowning you in menus and information. It may seem like a small thing, but in a game with this much going on, that clarity is vital.

These racing families also provide the structure of The Crew 2, with each having its own rewards and an obnoxious top dog that you’ll eventually face off against. This never becomes a full-on story mode which, given that one of the game’s few cutscenes includes a line about “legendary badassdom”, is probably a good thing, but it does give some character to the world, and your guide to each of the families will occasionally pop up on the radio to give you advice or encouragement. There are also little animated cutscenes that try to explain the psychology of each discipline and explore themes like whether street racing should push for legal status or the freedom of the open road. These are basically pointless, but they’re nicely done and add a bit of variety. 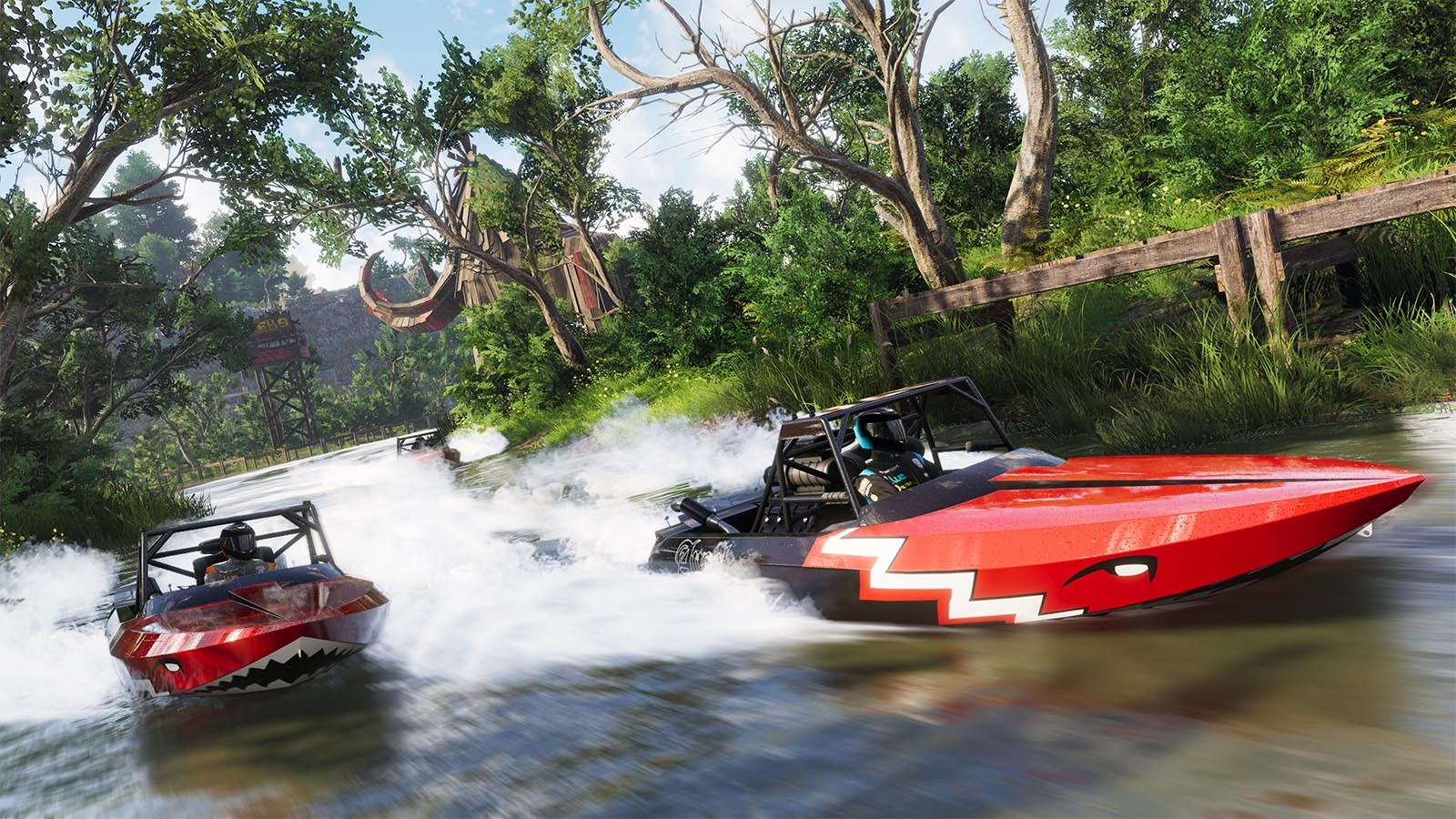 More than anything, it’s nice to simply be playing an arcade racer again, a genre that seems to have been neglected as people rushed towards either full-on driving sims or massive open-world games where driving was part of the fun. This is particularly the case on PS4, with Sony petrolheads casting covetous glances towards Xbox owners and the Forza series. This situation is summed up by the fact that one of the best racers on PS4 is the remastered Burnout Paradise, a game that’s now over 10 years old. The most successful recent racer is probably Driveclub, but even that is now a few years old and is more of a sim than an arcade racer, with time penalties given for cutting corners and hitting other vehicles. Moreover, Evolution Studios (the devs behind Driveclub and the Motorstorm series) recently closed and was absorbed into Codemasters, leaving Ivory Tower as one of a handful of developers committed to arcade racers.

Overall, it’s easy to pick small holes in The Crew 2, its races could be tighter, the virtual sun can be blinding, and there’s some pop-in that occasionally shows just how hard your PS4 is working. Its minor failures are, however, dwarfed by its huge successes; for the second game in a row, Ivory Tower has recreated the entire U.S. and this time added planes and boats into the mix too. It looks gorgeous, has a great soundtrack, heaps of customisation and a massive open world that’s full of stuff to do. More than anything though, it’s amazing to play a game where, in a couple of hours, you can race through the streets of New York, flip and spin on a monster truck course just outside L.A., loop and roll under the Golden Gate Bridge, and power past the Statue of Liberty in a powerboat. The Crew 2 may not always work perfectly, but when it does, it’s glorious. 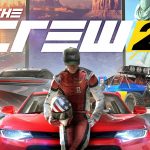 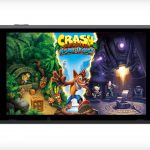 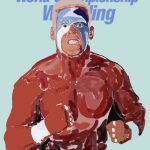