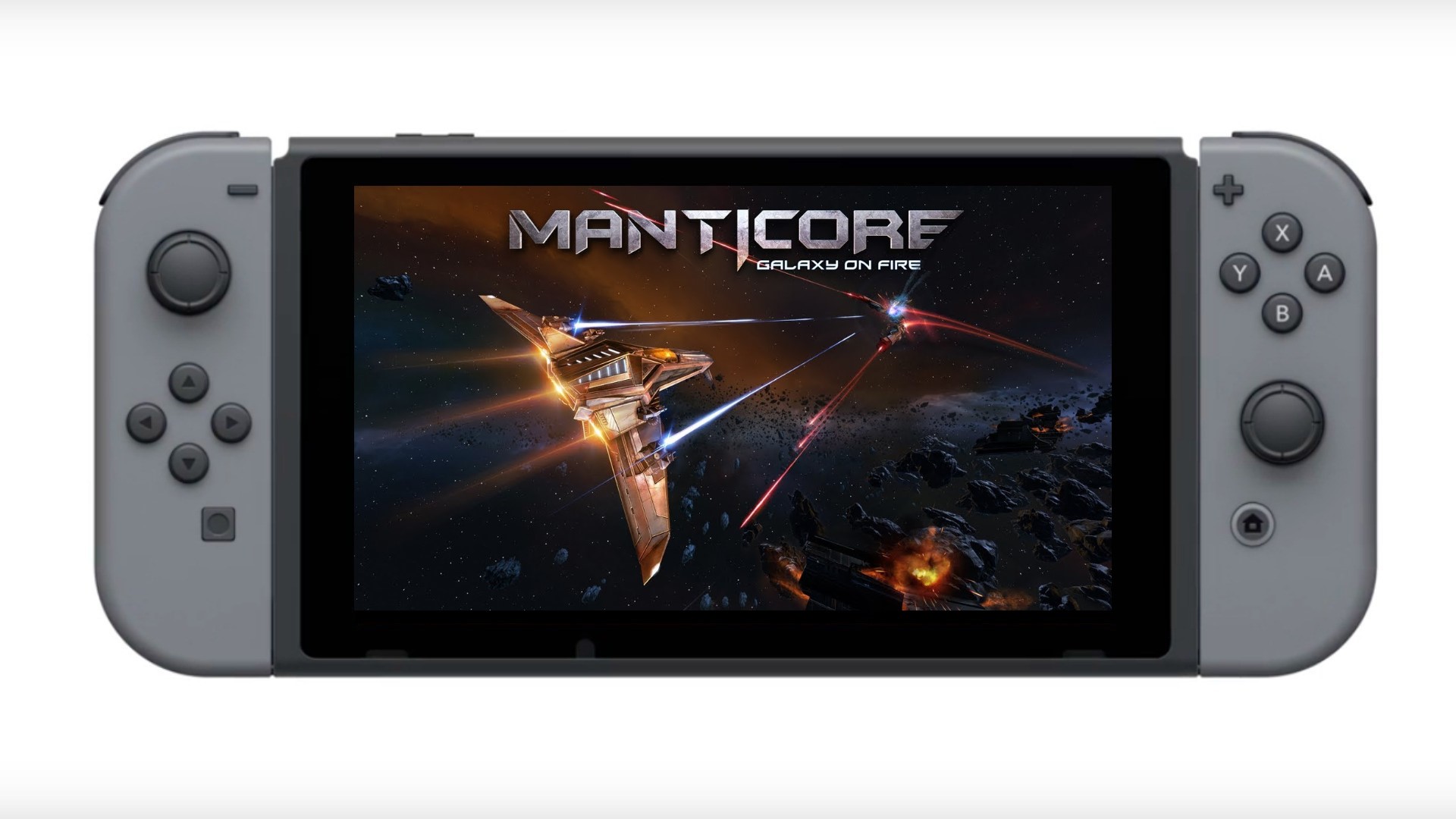 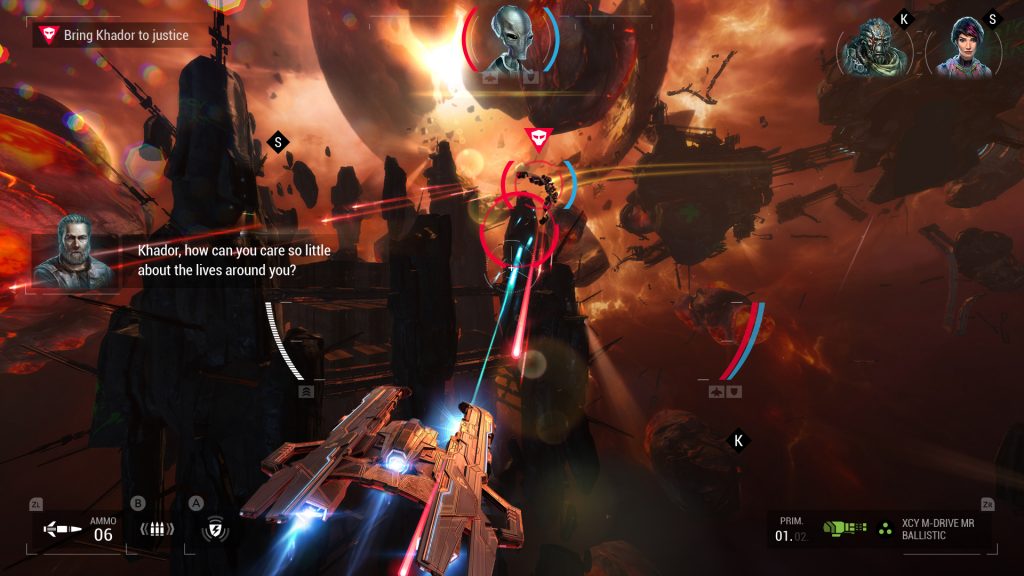 Manticore: Galaxy on Fire sees you enter the hazardous Neox Sector, a far-off part of the galaxy filled with warlords and mercenaries, and your goal is to take down the warlords found in this sector. The first area or act of the game sees you hunting down the leader of the Gr’Garth pirate gang Sh’Gaal. The game never says who you play as, so I assumed I was just playing as myself. Most of the characters don’t refer to you by any name or title, and the only thing your called in the entire game is either Kid or Ace. The game wastes no time in throwing you into the action, in fact, it took about 30 seconds from the game starting before the action started.

Manticore: Galaxy on Fire is a space-based dog fighting game. You receive missions and find yourself flying around in fairly large space environments. The goals for each mission change pretty often. One mission I was on had me searching for survivors on a ship that had sustained a deadly attack, while the next mission had me protecting a convoy carrying supplies. Typically, the different mission types fell into the category of escort missions, destroy the enemy missions, search missions, or exploration missions. There really is a nice variety of mission structures in the game, which was nice and helped break up the gameplay. The missions themselves were short, typically lasting between 3-6 minutes. I did run into a couple of missions that took longer than that, but for the most part, missions aren’t long. This works really well on Nintendo Switch as the quick pick up and play style of the console works well with the quick missions you undertake in this game. I tried Manticore out both in docked mode and in handheld mode, and the game runs really well in both modes with a solid, consistent framerate. My only complaint in handheld mode was that objects on the screen did seem a little small, so far off enemies were a little difficult to see in battle. That said, because the series is from mobile roots, the game plays well on the Switch screen in handheld mode. 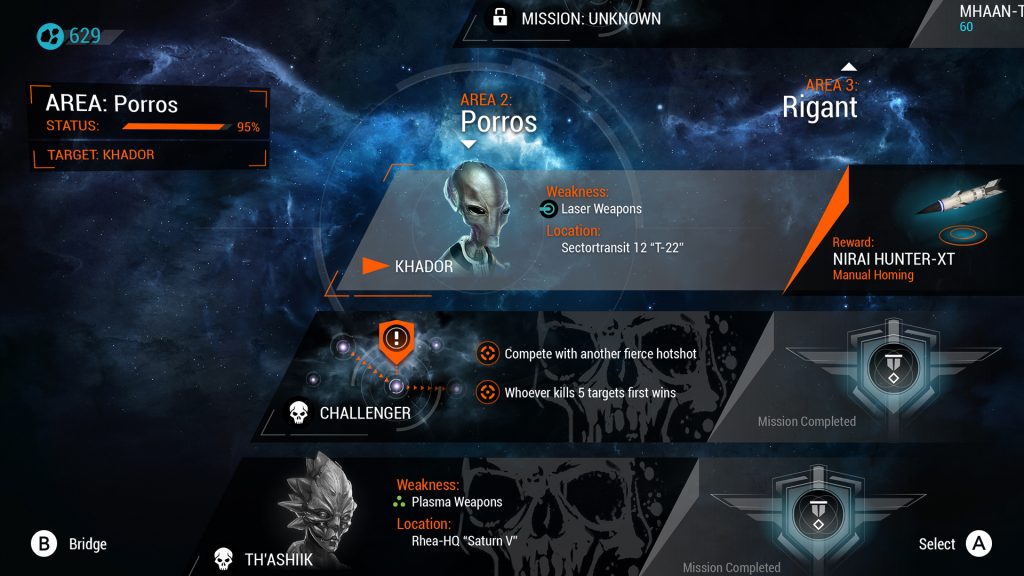 The game also featured full voice acting, which actually surprised me. I assumed that most of the game would involve a lot of reading text on the screen, but every character and line in the game was fully voiced. The quality of the voice acting was mixed, some characters were done really well, others….not very well at all. Still, there was a great variety of characters in the game, which is great because you get these characters as teammates to help you out in battle. Surprisingly, your teammates have competent A.I., which is especially helpful in certain battles. During most intense battles that feature lots of enemies, my teammates’ A.I. actually helped fight off enemies that were attacking me rather than randomly flying off doing nothing helpful. The same can be said of the enemies. Enemies didn’t just fly right at you, rather they tried to gang up on you or get you from behind by flying above or under you. I was quite happy with this, making each mission a challenge. 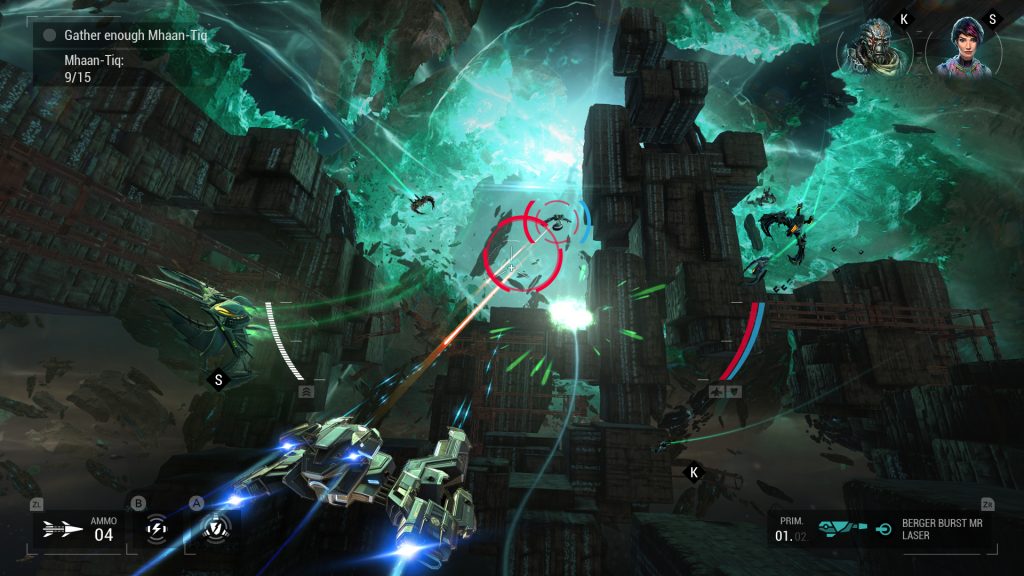 Manticore: Galaxy on Fire is far from perfect though. Like I mentioned at the beginning, the game series has only ever been on mobile. In fact, Manticore: Galaxy on Fire can be downloaded for free right now as Galaxy on Fire 3. It’s really easy to tell this is a mobile game that’s been ported to the Switch. The game’s visuals are also dated. While flying around fighting enemies in space, the camera moves quick enough and keeps you far enough away from objects for you not to notice. However, flying up to ships, space stations, even asteroids shows they have very little detail and even generic models in space. When you take on the bosses in the game, most battles end with the boss ship simply fading away while an explosion sound plays. It’s small details like this that show the mobile game influences in this game. While this game looks great on your tablet or phone, when you dock your Switch to play on the TV, it’s obvious it wasn’t designed to be on the big screen. That said, the dated visuals and mobile gameplay setup weren’t enough to stop me from playing the game. 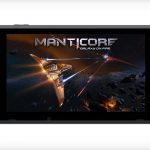 Ranking the God of War Games