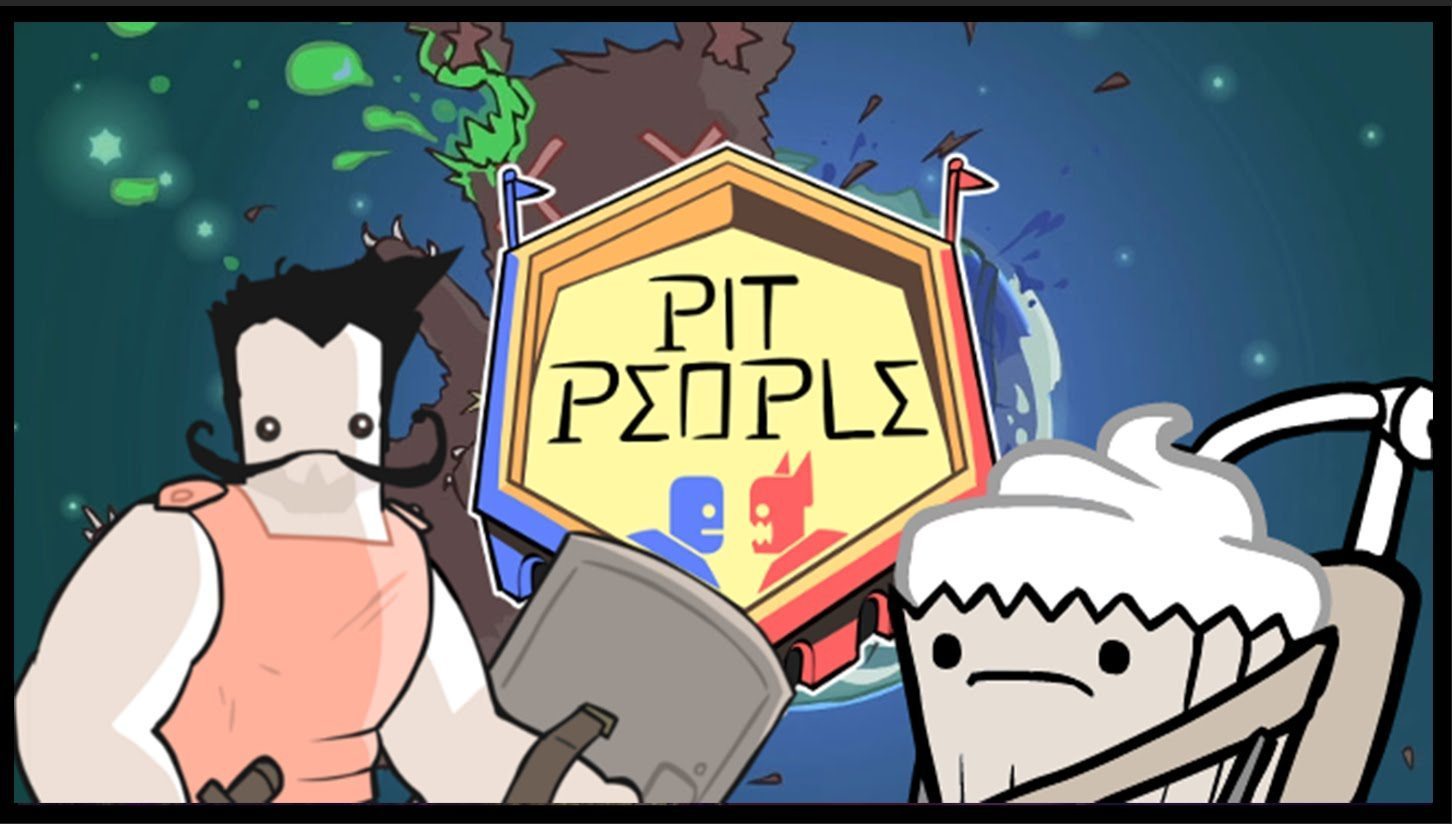 The silly nature of Castle Crashers taught us a couple things about developer Behemoth. The first is that they aren’t fans of serious stories. No matter the distraction, Castle Crashers was filled with little quips and goofy animations. That quirky storyline made for an arcade title that caused just as much laughter as finger twitching action. The second thing we learned was the fact that Behemoth could take that silly nature of design and implement it to subtly change a genre. In the case of Castle Crashers, it was revolutionary, but their new release, Pit People, is a totally different creature. Fresh out of game preview, Pit People makes a couple of key changes to the strategy formula that some may find odd, at the very least.

Starring some odd heroes, The Behemoth’s newest game is a hexagonal battlefield of turn-based strategy. Using that same visual style, Pit People reminds me of Castle Crashers in so many ways, and the only real difference is in genre. Our story begins with Horatio, a blueberry farmer. As his world is thrown into chaos, his son is killed, his farm is destroyed, and he’s thrust into an adventure very different from anything you’d probably suspect. These beginning bits not only serve as a tutorial but also as an introduction to the world by an awesome narrator. The sound and inflection in his voice truly made the story unfold in a great way, and more often than not, his jokes fell point on. As he guided me on a trip across a beautiful overworld map, I quickly learned that Pit People is quite different from any turn-based game before it. 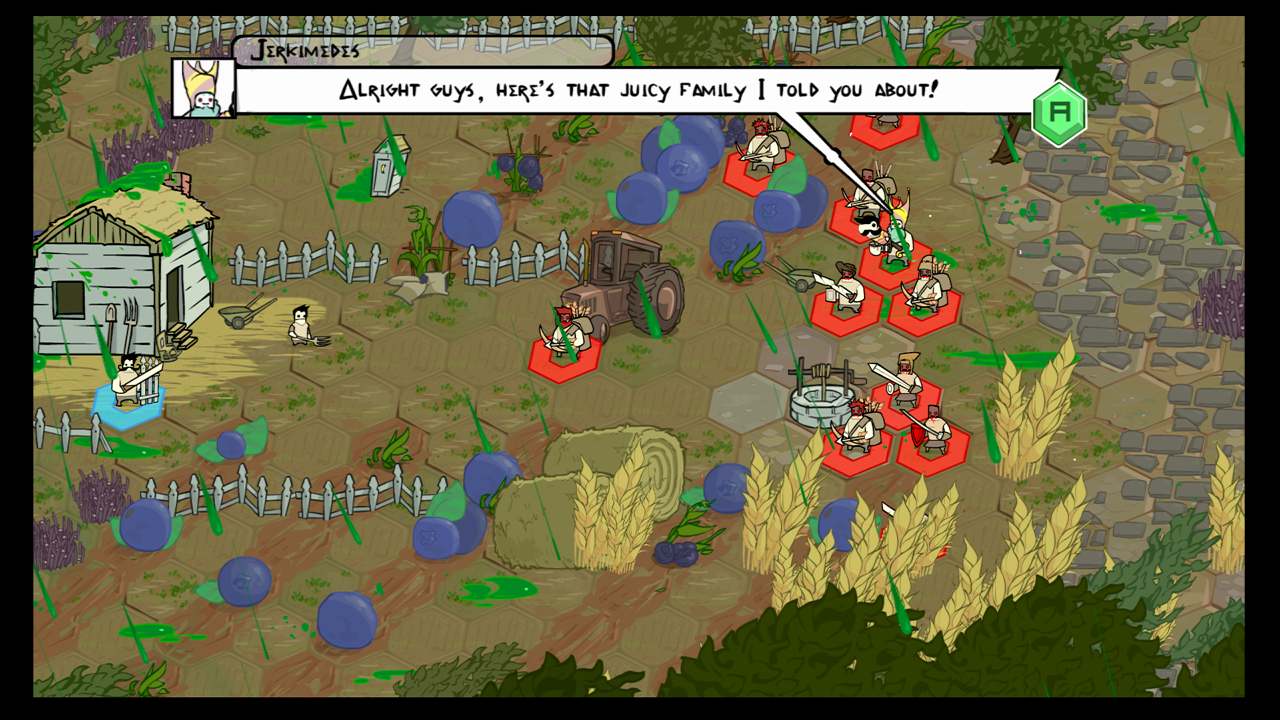 Your characters and the enemies across from them populate the uniquely designed maps. Instead of consistency, the fun of Pit People’s level design comes from the player having to bend to the will of the map. You’re forced to think about what kind of heroes you wish to put in certain locations based on their weapons, range, and health. To make things even worse, you’re never sure who your allies are going to attack. You control where your warriors go, but they ultimately have minds of their own. Putting your ranged warriors where they can hit three enemies doesn’t mean you can have them take out the strongest one first, it doesn’t even guarantee that your archer won’t hit your own allies. This type of unpredictability culminates into gameplay that feels uncontrollable, both in good and bad ways. If you like some challenge in your strategy games, then yes, these additions are great. However, if you’re like me and want more of an exact and pure form of strategy, Pit People isn’t going to deliver on that. This aspect of randomness not only applies to the maps and battling system but also the odd and mostly fragmented story of Pit People.

The plot starts wonderfully. The silly undertones of a world controlled by the evil narrator himself made for fun moments. The medieval apocalypse thing might not be the most original topic for games, but when done in Behemoth’s style, it gave enough different vibes to be taken as something that pushed that envelope further. But then the rest of the story enters, and the world which was once filled with characters that made sense was erased, and in its path Pit People story was left a tangled mess of goofy sub-plots that didn’t interest me at all. The jokes began running stale because of just how off the wall everything was. Contrast this with the genre The Behemoth is creating in, and suddenly you have a title that is at odds with a very hardcore genre. Not only do the mechanics run against the grain when it comes to turn-based strategy, but the story does so as well. I hate to be the person taking one of this studio’s works as serious, but there has to be a certain amount of grounded plots that can make sense when combined with the humor of this already proven indie team. 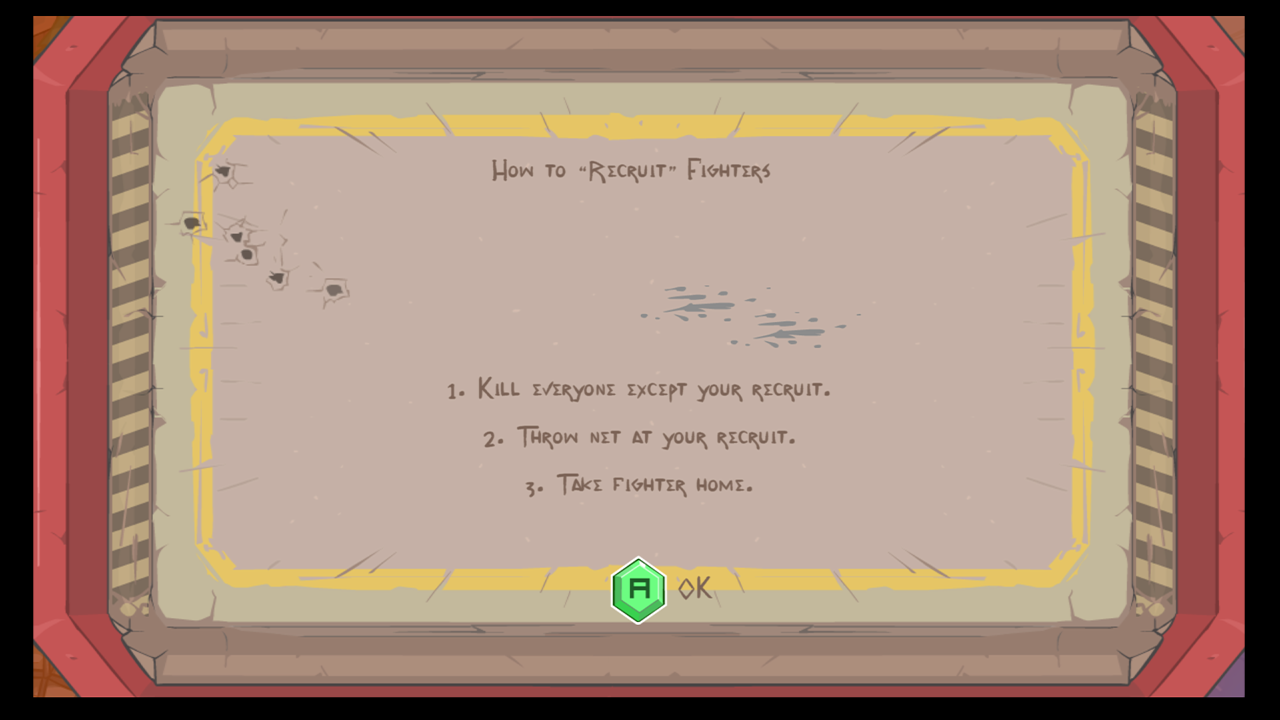 But for what Pit People lacked in mechanical prowess and a proper narrative, it makes up for in its implementation of recruiting different characters for your ragtag team of heroes. During some battles, you’ll be able to net another hero for use in the rest of the campaign. These characters felt interesting, not in their plots (which all range very widely) but in the way they all work together as a cohesive unit. Some might have special powers (like a healing cupcake), and others might just be used to soak up damage from enemy archers to let your team advance. No matter the event, there was likely a hero in Pit People who could do the job. In this way, I felt more attached to these characters through how I could utilize them rather than through their individual stories, of which there was often little to go around. Because of this, the perma-death that plagued non-story imperative characters didn’t mean much. When I eventually lost a hero due to poor battle tactics, I wasn’t too hurt. I went back to my house used for upgrading and managing my team and picked from a swath of other heroes to replace the one I lost. Strategy titles like XCOM taught me that there was much more to be had in a system like this, but just because it doesn’t work exactly how I wanted it to, it doesn’t mean I wont commend the valiant effort by the veterans at Behemoth.

I got tired of Pit People’s quirky plot, random attack patterns, and inconsistent character plots, but I found myself oddly addicted to the adventure I was on. Collecting characters and using them in battles where I have to think about each character and their ability was fun. Pit People didn’t have the exactness of other strategy games, and often times it made me feel more like an onlooker rather than the leader in my pack of misfit heroes. It’s a give and take with this new title, and that’s exactly why it lacks the magic that enchanted Castle Crashers and even BattleBlock Theater. I go back to Pit People every so often after my initial playthrough, but this game is certainly not for everyone. I’d say if you were a strategy purist, stay away. If you are, however, just a fan of the The Behemoth’s art style and goofy nature, Pit People is perfect for you. 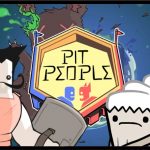 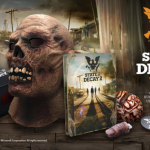 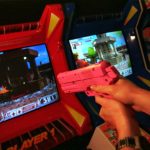