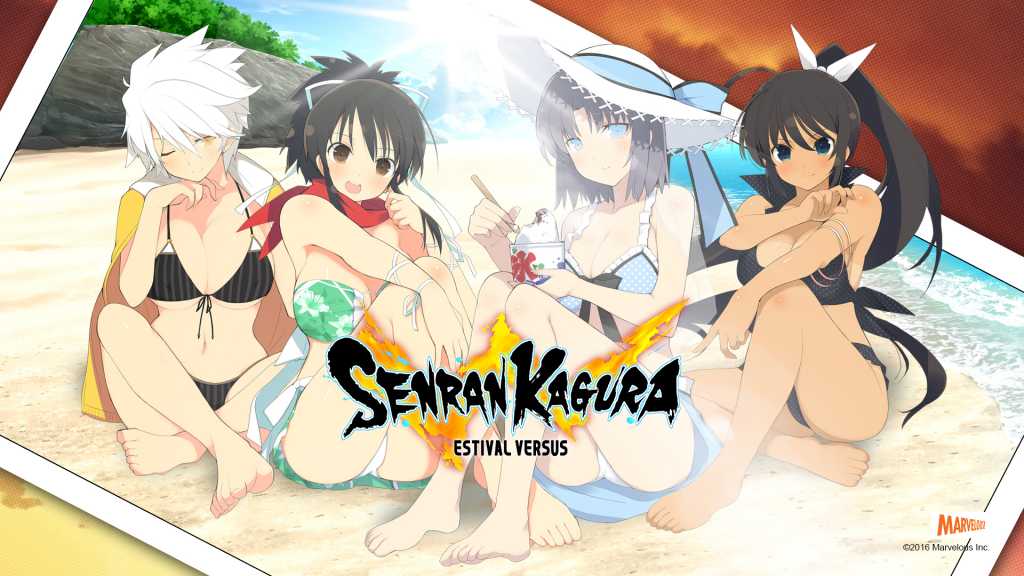 It feels like practically no time has passed since I last reviewed a Senran Kagura game for the site. In fact, the last game in the series that I covered, Senran Kagura: Bon Appetit!- Full Course, was only released around November of last year, so I’m still feeling pretty raw from my last dalliance with the series. Nevertheless, let’s get started here.

For the uninitiated, the Senran Kagura games are a series of erotically focused combat games which made its debut on the Nintendo 3DS of all places. The story concerns the exploits of three different ninja schools and their teachers as they battle amongst themselves on their paths to become fully fledged shinobi. The series has several adaptations, including a manga series, an anime series and an OVA.

The story of this game specifically centres around the usual cast of ninja students as they are all individually summoned to a strange dimension where the souls of long dead shinobi can return to life for a short period of time. It turns out that they have all been summoned to compete in a festival (hence the name?…maybe) so that the winner can either achieve the highest ninja rank or defeat an evil monster that is preparing to attack the world, it’s not exactly clear which.

If it seems like I’m a little sketchy on the story, that is mainly because there is so much of it. Between each and every bout, the game dumps a mammoth amount of story on you, and it can feel a little bit like drowning. The reason for the huge amount of story is probably because there are so many characters to develop, and the game tries its hardest to give each character their own personality and background. 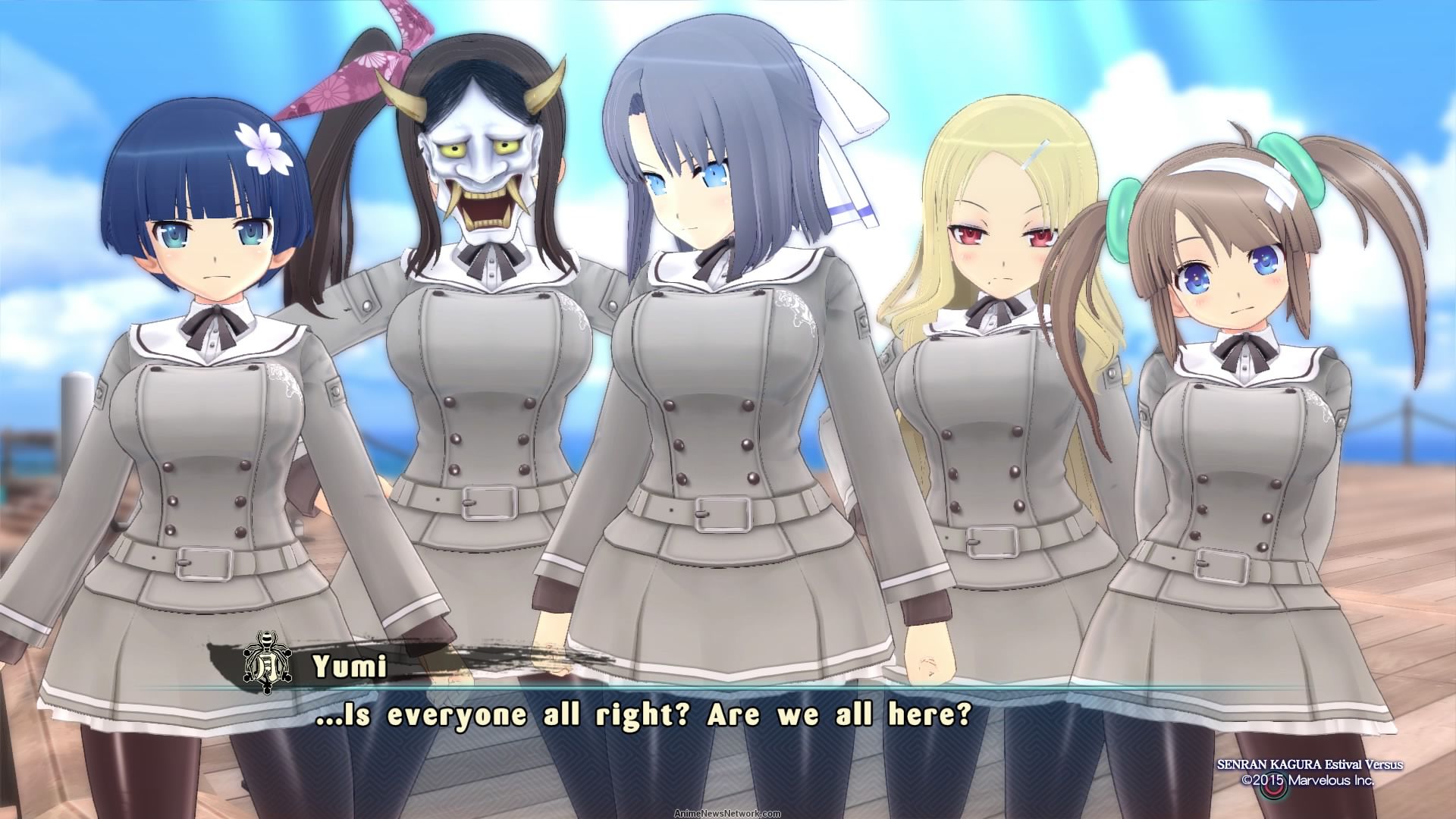 The amount of characters can be a bit daunting as well really, I remember very few if any of their names and can effectively only identify most of them by their combat style or a single major personality trait (e.g. “it’s the gropey one”, “it’s the shut-in”, etc.)

Finally, we move onto the main focus of the game, the gameplay. I find myself in a difficult position when it comes to explaining this game to you, because I’m ashamed to say that I had what felt like far too much fun playing this game. As I said earlier, I’ve reviewed the games in this series before, and most of the time they end up receiving decidedly average scores. This is mainly due to the fact that the gameplay has been done much better before, and the gross sexualisation was jarring and distracting. The combat feel of this game reached a new level when it got so good that it actually overshadowed the fan services, which is still pretty damn strong.

Combat follows a similar routine to the other games in the series, you have a quick and strong attack which you can use in varying orders to pull off combos. You have a shinobi transformation which refills your health and gives you access to special attacks (not to mention makes your character’s clothing fly off, Sailor Moon-style), and you can perform blocks and AOE attacks that force your opponent backwards to give you breathing room.

What is it about this combat system that has changed? Actually, it’s the verticality of it. While jumping into the air and mashing attack will get you nowhere, you can actually perform certain combos that will launch enemies across the field. If you tap the dash button you can then shoot after them and perform a particularly devastating combo called an aerial rave, which can also be performed with a partner to produce an even more devastating attack that honestly just looks cool. 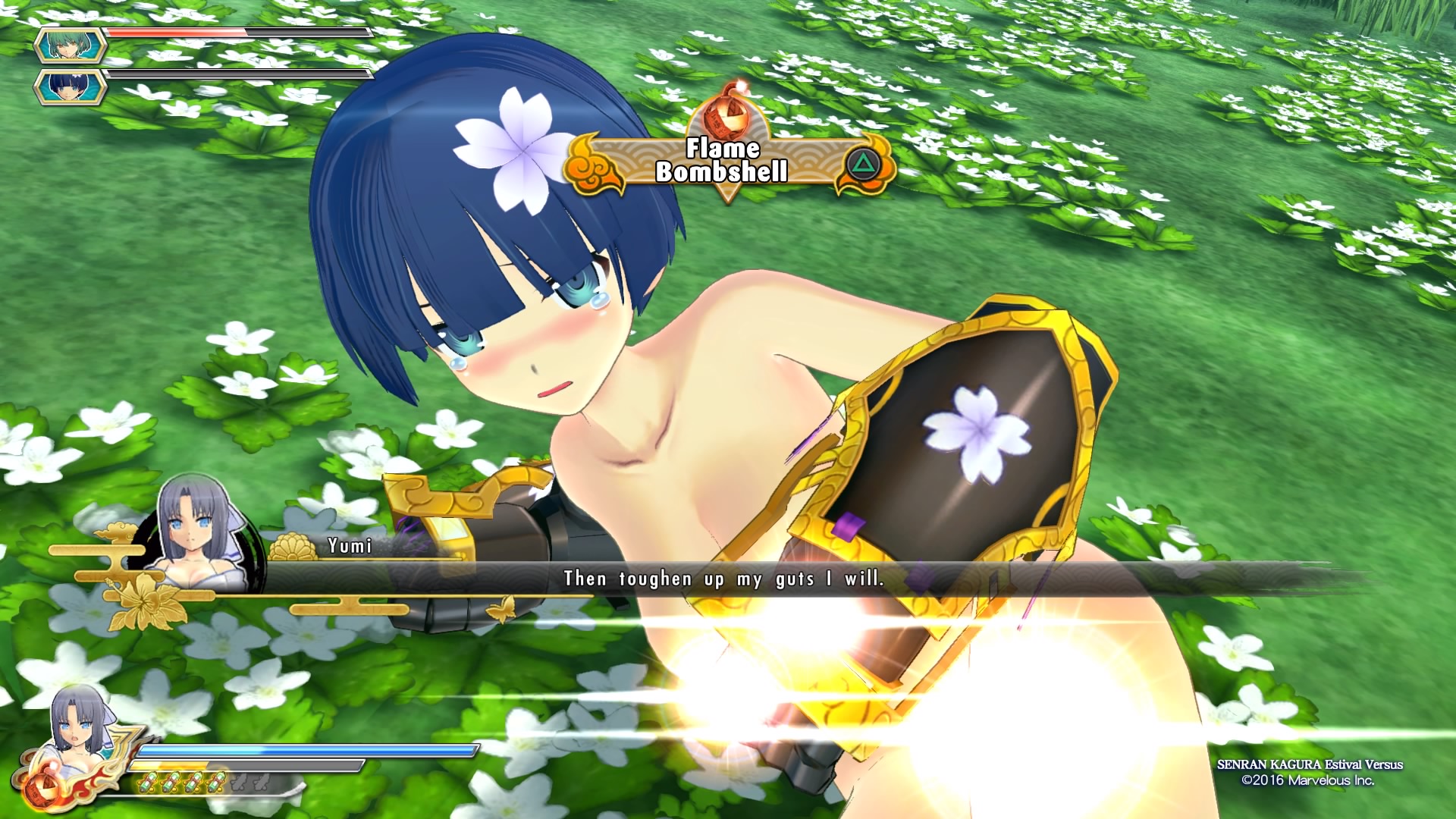 As well as this, it’s now also possible to perform attacks while running along walls ninja-style. This effectively means that as long as you have mastery over a character, you’re never in a position where you cannot attack. The other good thing about these wall attacks is that they can be used when an opponent blasts you against a wall, meaning that a clever player can use them to turn the tide back against their opponent. Aerial raves also have this ability too. If you’re caught in an enemy’s dual rave, you can perform your own to cancel it out and escape intact.

This new fluidity adds a lot to the combat, to the point that after the 8 hours or so of the game that I played for this review, I actually have a favourite character (it’s Hikage) After a while the combat basically comes to you as easy as breathing, and you’ll live for the moments where you finish off a major opponent with a special attack or a dual rave.

Of course, I must now talk about the fan service, something I find myself increasingly unwilling to do. This series basically exists so that people who want to see scantily clad girls kick the crap out of each other, and the clothes off of each other, get to do that. There are enough characters with different looks and personalities so that fans of the series will have their favourite looking girls to ogle. 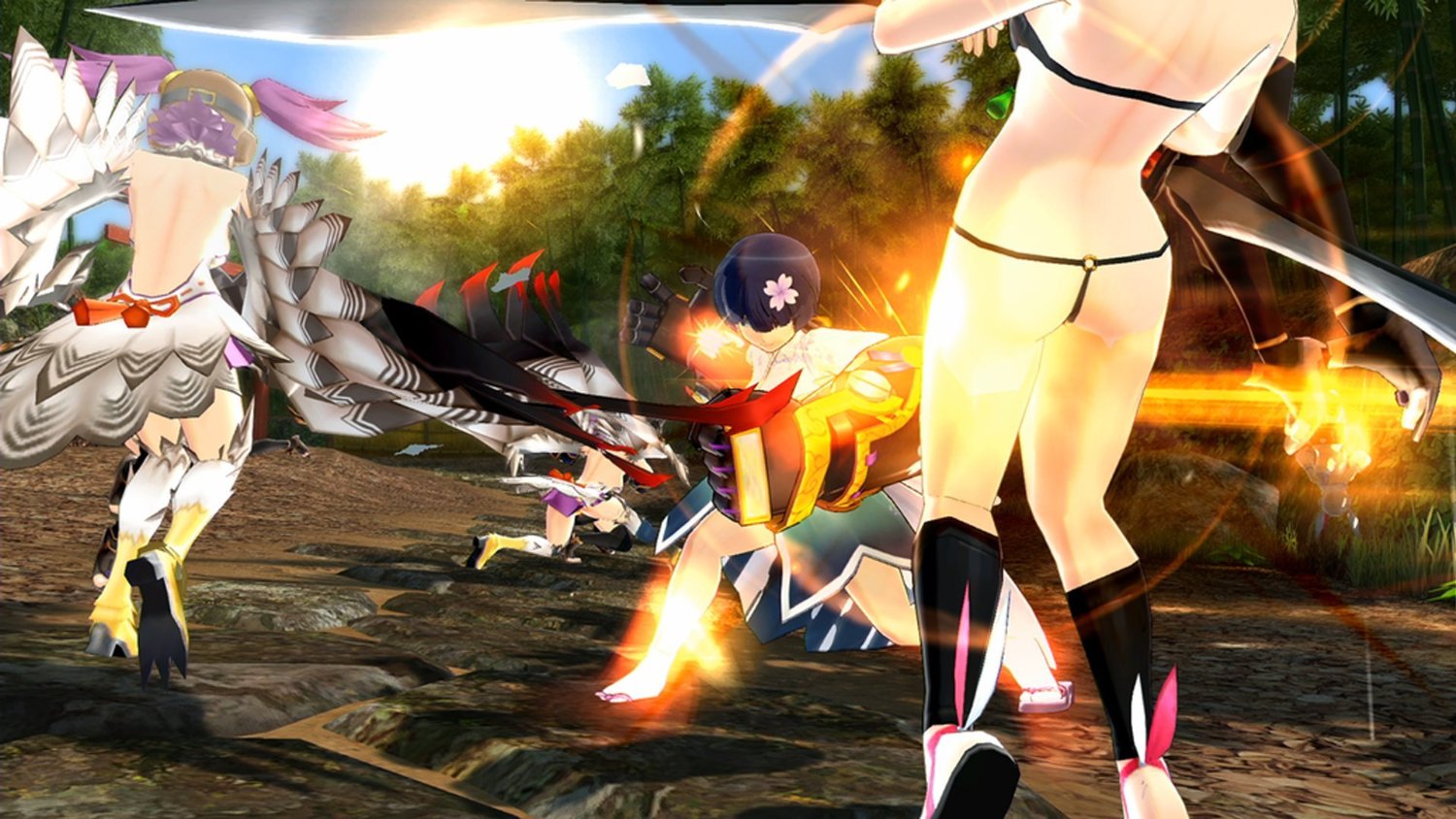 This game does not escape the fan service, and as usual, if you perform the right combo or just do enough damage, your opponent will start to lose their clothing. In some cases, if you perform the correct action on the correct stage, you can make all of your enemy’s clothing fly off in a single blow, and they’ll land somewhere specific to the stage, like a tree or a giant tea-cup ride (for some reason). Honestly, if you’re into the idea of a fighting game which results in erotic poses being performed by the loser, then you’re going to be far too into this game. If you’re anything like me, however, you’re going to be too into the combat and will just end up slapping B as soon as a scene starts just to prevent the interruption to your flow.

Jarring erotica scenes aside, the game’s combat just feels good to play, and you’ll want to try out all of the different characters just to see which moveset suits you the best. However, for some reason there doesn’t seem to be a practice mode, so you will have to go through the storyline if you want to try the characters out properly.

There is plenty to do story-wise as well. There are hours and hours of gameplay from the main story alone, as well as personal stories for each of the characters along with special side-missions. The side-missions tend to be straightforward fights, but they’re usually a bit tougher than the main missions. So, if the story is too easy for you, then you can probably get your kicks here instead.

There is an online mode included, and you can battle it out with people from all over the world, if you can manage to find anyone else playing. The online feature includes a wide variety of modes from straight up brawls to point scoring competitions, as well as more…perverse offerings like a ‘catch the bra’ competition. 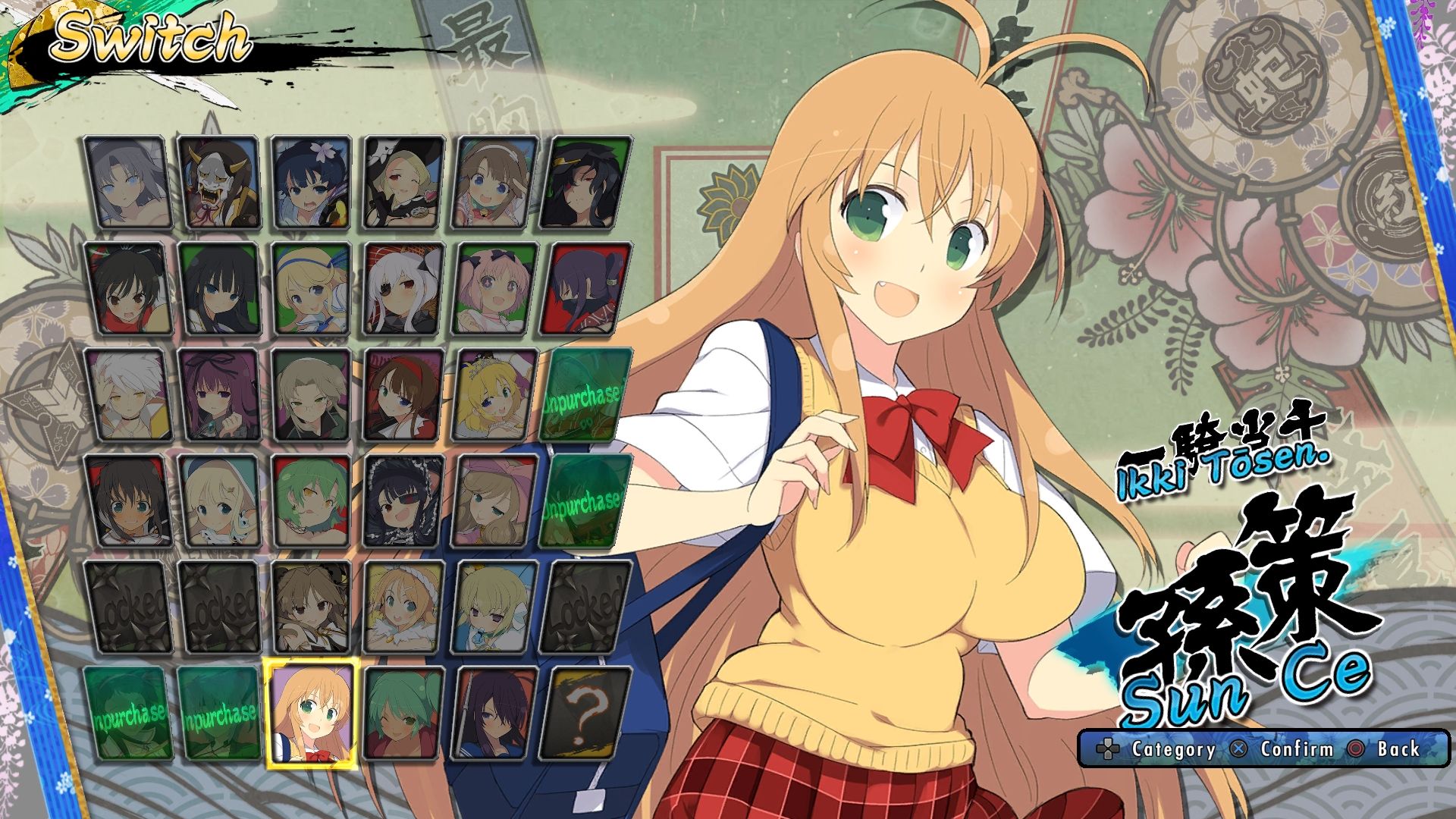 Visually, the game looks pretty good, although some of the jiggle physics are ridiculous. Obviously, the aesthetic is far from being realistic, but the stylised visuals do a decent job of portraying the silly and fun tone of the game. The only visual problem I did notice is that it can sometimes look like the heads don’t quite match the bodies at all, like they’ve been badly photoshopped on, or worse, that the heads have all been stuck roughly on the wrong body.

The levels have a pleasant amount of variety to them. Most of them are key places taken from moments in the series, but there are a lot of new stages developed just for this game as well. In one fight you can be on a beach going toe-to-toe with a horde of ninja, then in the next you can be in an ice parade fighting a trio of shrine maidens.

At the end of the day, this game has to be considered to be doing something right. It’s the first time in the series that the sexual objectification of the characters is actually overshadowed by how much fun the game is to play. However, I couldn’t exactly blame anyone from being turned off by the game’s frankly preposterous level of sexuality. 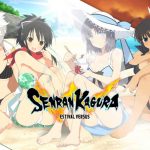 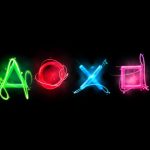 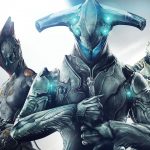 Digital Extremes and iam8bit Team Up to Release Warframe Merchandise