Do you feel bad about pirating Maniac Mansion and Monkey Island when you were a kid? I know I do, although I’m pretty sure I owned a boxed version of Monkey Island 2 for the Amiga back in the day (11 bloody disks it was!). Anyway, the team behind upcoming adventure game Thimbleweed Park are offering redemption for a measly $25 (£18) and as a bonus they’ll even throw in a digital copy of their new game.

Thimbleweed Park is a point-and-click adventure from genre veterans Ron Gilbert and Gary Winnick, creators of the aforementioned games. Featuring a SCUMM-style verb interface and 2D pixelated graphics highly reminiscent of the 16-bit era, it’s described as a “game that cuts to the core of what made the classic games so special, and done by the actual people who spawned the genre”.

Thimbleweed Park is the curious story of two washed up detectives called in to investigate a dead body found in the river just outside of town… Lost along a dusty stretch of highway, the town of Thimbleweed Park once boasted an opulent hotel, a vibrant business district and the state’s largest pillow factory, but now teeters on the edge of oblivion and continues to exist for no real reason. It’s a town that makes you itch and your skin crawl. It’s a place no one ever looks for, but everyone seems to find.

And you can watch the trailer below.

Similar to Maniac Mansion, there will be five playable characters, who you can switch between at any time, as well as multiple endings. Plus hundreds of locations to explore, complex puzzles, easy and hard difficulty modes, and a cast of around 20 characters, who will all be fully voice acted. Perhaps most importantly, it promises to recapture the playful humour and wit that was so intrinsic to the appeal of the classic Lucasfilm Games and will be “poking fun at Twin Peaks, True Detective and The X-Files, with a little Stephen King thrown in just for fun”. I’m genuinely quite excited.

Thimbleweed Park began life as a Kickstarter campaign at the end of 2014, exceeding its $375,000 goal in just one week and going on to raise a total of $626,250 from 15,623 backers. It’s scheduled to be completed by late 2016 and will be available on Windows, Mac and Linux, with Android and iOS versions also in the pipeline. You can still pledge money to the project here. 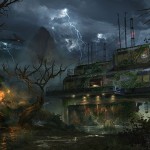