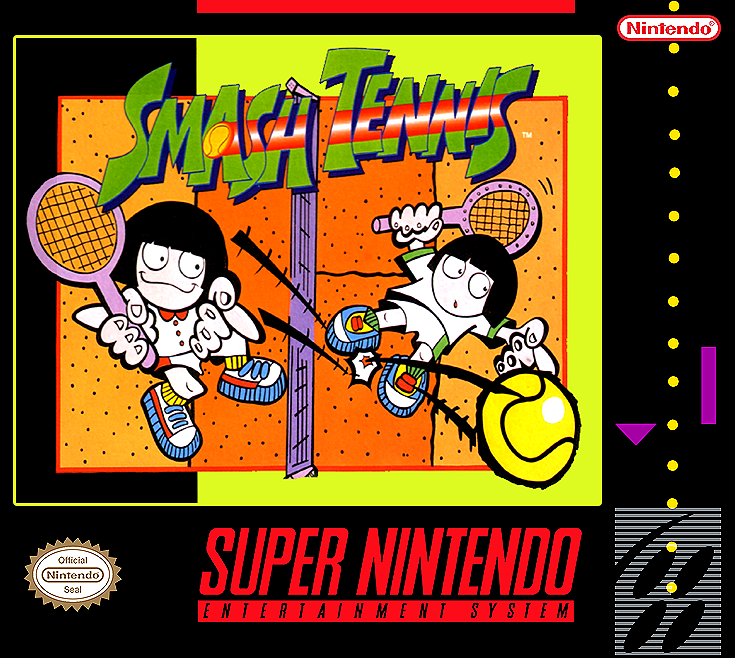 Smash Tennis from Namco is a continuation of the Family Tennis series and one of the better sports-based games you can find on the Super Nintendo. At heart it’s a basic tennis sim, with no official licensing going on and a selection of players being created just for the game. You won’t see Andre Agassi, Pete Sampras, Martin Hingis or other early to mid-90s tennis players making an appearance here, nor will you be able to stroll onto real tennis courts at places like Wimbledon. However, it’s better to have a good game with no license instead of a fully licensed game that’s bad, and Smash Tennis more than makes up for its lack of real player names, venues and tournaments by providing fun gameplay with no lack of charm and character.

Smash Tennis is one of those games that anyone can pick up and start playing, but it takes practice and dedication to really excel at it, which is pretty much perfect for a sports game. All four of the SNES’ face buttons will see you perform a different kind of swing, with a standard one that will usually remain in but will lack power, gradually more powerful ones that will increase your chances of outfoxing your opponent whilst also increasing your own chances of knocking the ball out of bounds, all the way up to a chip which, if I’m being honest, I hardly ever used because it almost always led to the computer smashing the ball back at me whilst I stood there gawping helplessly. 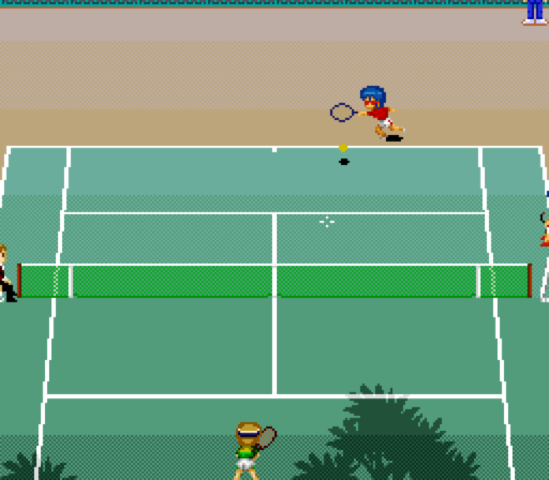 In a nice touch, each of the opposing players has their own attributes and skills that they like to use, meaning that in the main single-player tournament mode, you rarely play the same style of match in a row, which helps with keeping things fresh. Some players will stick close to the net and try to hassle you into making a mistake, others will hammer the ball at high speeds from the serve onwards in hopes of destroying you with sheer brute force, whilst others will try and use lobs and dainty chips to leave your racquet hanging in no person’s land whilst the ball happily trickles past, giving them a precious point in the process.

Single-player in Smash Tennis is all about you trying to win multiple tournaments so that you can become a much feted Grand Slam Champion, with exhibition mode giving you a chance to brush up your skills against the computer whilst also playing both singles and doubles games with your mates. There is even an option to play a doubles version of tournament mode, where you and a pal both control a player, which adds some co-op fun to the proceedings as well. From a longevity perspective, you can only really play the tournaments again as another character, but if you have pals who are up for some 2-4 player fun, then Smash Tennis could last you for yonks, especially if you and your mates all own a Nintendo Switch with a Nintendo Online Membership as Smash Tennis is available to play on that system’s SNES Emulator. 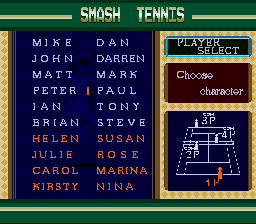 Graphically, Smash Tennis is hardly going to blow your mind, but the sprites come with genuine charm, and the game has a timeless quality to due to the more cartoony nature of the visuals. Sound-wise, you’re just getting generic tracks on the menus and basic tennis sound effects when matches are taking place, but you don’t really need much more. Smash Tennis is mostly about the gameplay, but it’s hardly bad from a presentation standpoint, and the game has real character, even if it isn’t a graphical behemoth. It’s nice enough to look at without dazzling, and that’s absolutely fine.

I found Smash Tennis to be a fun game with a friendly learning curve and a pleasing presentation. It’s hardly the deepest tennis sim ever, but it’s by no means a generic slice-about either. There is some genuine depth here if you’re willing to put the time in honing your skills, and the gameplay is smooth and intuitive. Anyone can pick Smash Tennis up, but not everyone will master it, which means it’s both accessible to your casual player whilst still offering something for your hardened video game player to want to keep coming back for another frame. I’ve played some pretty rubbish tennis games over the years, as well as some okay-ish ones, like Breakpoint on the PlayStation, but Smash Tennis is genuinely good. It’s fun to play, it has bags of character, and if you have friends who are willing to play it with you, then you can sink hours into the multiplayer.

Smash Tennis is well worth a go if you’ve never played it and fancy a virtual tennis-em-up! 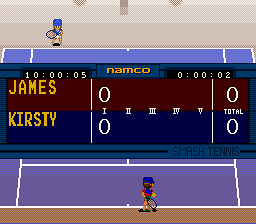 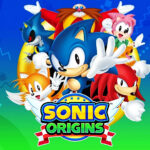