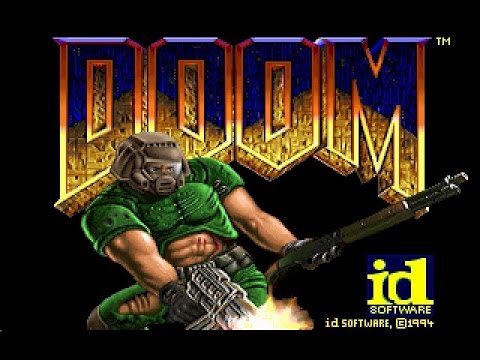 Doom on the 32X has terrible music. There, I’ve got it to the forefront right from the off. The music is an often complained about aspect of Doom 32X, and it’s a fully justified point. Most of the musical tracks sound terrible and are akin to a farting cat trying to play a cello in the dark with two of its paws tied together. It’s a really terrible musical score that butchers some really good pumping tracks. It’s bad. It’s unconstitutional. It makes unicorns cry. I thought it only made sense to stick that right at the beginning of the article so that those who are only reading to see a long held opinion of theirs agreed with don’t have to traipse through the rest of this just for the bit they actually care about. If you’d like to stick with me for the rest of this, then I’ll see you all in paragraph 2, but to the rest of you, I hope you’re now fully satisfied and can return to whatever godforsaken pursuits you usually get up to.

Thanks for sticking around if you’d decided to read this far, let’s have a bit of a chat about Doom 32X itself because, overall, it’s not a bad port of Doom, all told. It’s by no means the best, with the music being a contributing factor along with the graphics and the fact you have to play it on the SEGA controller. The Mega Drive controller isn’t bad, in my opinion, but it suffers from having no shoulder buttons, which makes strafing back and forth whilst also shooting far more cumbersome than it should be. I played this with a three-button pad, which meant that to strafe, I had to hold C whilst pressing B to shoot, and it’s just not a comfortable way to play the game. Considering that strafing plays a huge part in the original Doom games, this takes the gameplay down a considerable notch for me. 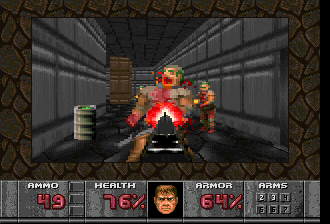 It doesn’t help as well that to change weapons, you have to first hold A and then press start, which is awful when you’re stuck in a firefight with multiple enemies and need to change which weapon you have equipped. I’m someone who likes to save shotgun ammo for when I really need it, so I will often use the pistol until a situation that requires the shotgun presents itself. However, switching weapons in a jam became such an ordeal that I ended up just hooking up the shotgun and using that most of the time, thus draining away the ammo and angering up my onions. First-person shooting on home consoles (especially back in earlier generations) has always been kind of at the mercy of system hardware with regards to how well it works, and sadly, SEGA’s default controller was just not made for this sort of game, and it shows.

That all being said, the frenetic and violent action that helped make the Doom series popular in the first place can still be found on Doom 32X, and once I got my head around playing it on the Mega Drive controller, I found that it was flawed yet playable. It’s as close to Doom as the console add-on to the Mega Drive could ever get, which is a testament to the work that went into it. When put up against the ports to the Super Nintendo, 3DO and SEGA Saturn, Doom 32X blows all three of them off the surface of Mars with a Bio Force Gun. Yeah, the graphics are fuzzy, and objects/enemies that are far away can sometimes be hard to make out, but this is the 32X, an add-on to a console that already was six years old by the time Doom 32X came out. The fact the game runs as smooth as it does is pretty impressive, and despite its flaws, I still had fun with it. 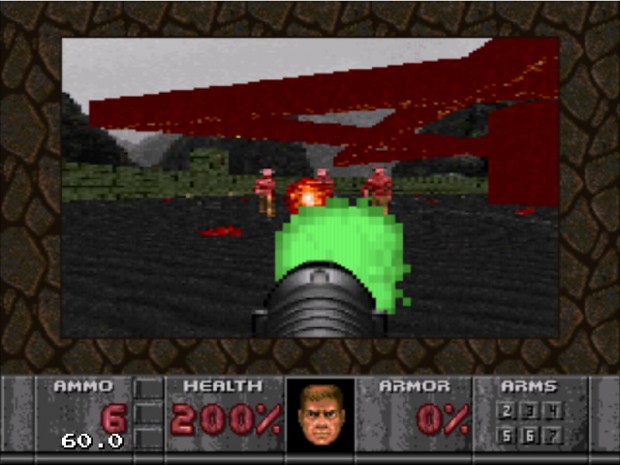 This was actually one of the rare times that I’ve truly found the original Doom scary, with enemies catching me unawares and cornering me more than once. Some of the lighting in the game is done rather well, especially in darkened areas where enemies lurk around corners waiting to rip you limb from limb. The music might not be up to par, but the sound effects mostly are, and I often found the growls of lurking hellspawn quite unnerving. Levels are stuffed with hidden areas, and the end of level screen makes sure to let you know about any areas you missed, thus encouraging you to have another go down the line. There are five difficulty levels, so regardless of your playing ability, you should be capable of finding a hearty challenge that works for you.

Despite the sometimes fiddly nature of the gameplay, the poor music and the somewhat fuzzy graphics, Doom 32X is not a bad game. It’s not the best port of Doom to the home consoles during the fourth and fifth generations (the Jaguar or PlayStation versions of the game would probably hold that distinction), but it’s a solid enough effort when you consider that the 32X really wasn’t especially cut out to have a game like Doom on it in the first place. It’s messy, violent and action-packed, and ultimately, that’s what you want Doom to be. It’s hardly perfect, but it works for the most part, and I can forgive its flaws to a certain degree thanks to the fun you can have from playing it. I’m not sure if I’d class it as a “killer app” for the 32X, but it’s a good game that you should definitely pick up if you are putting a 32X collection together. 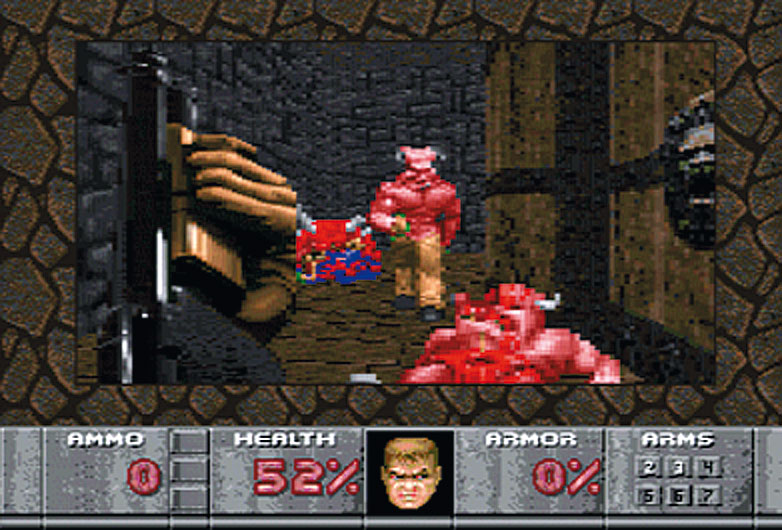 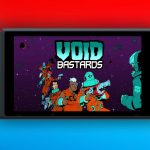 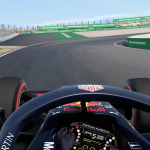