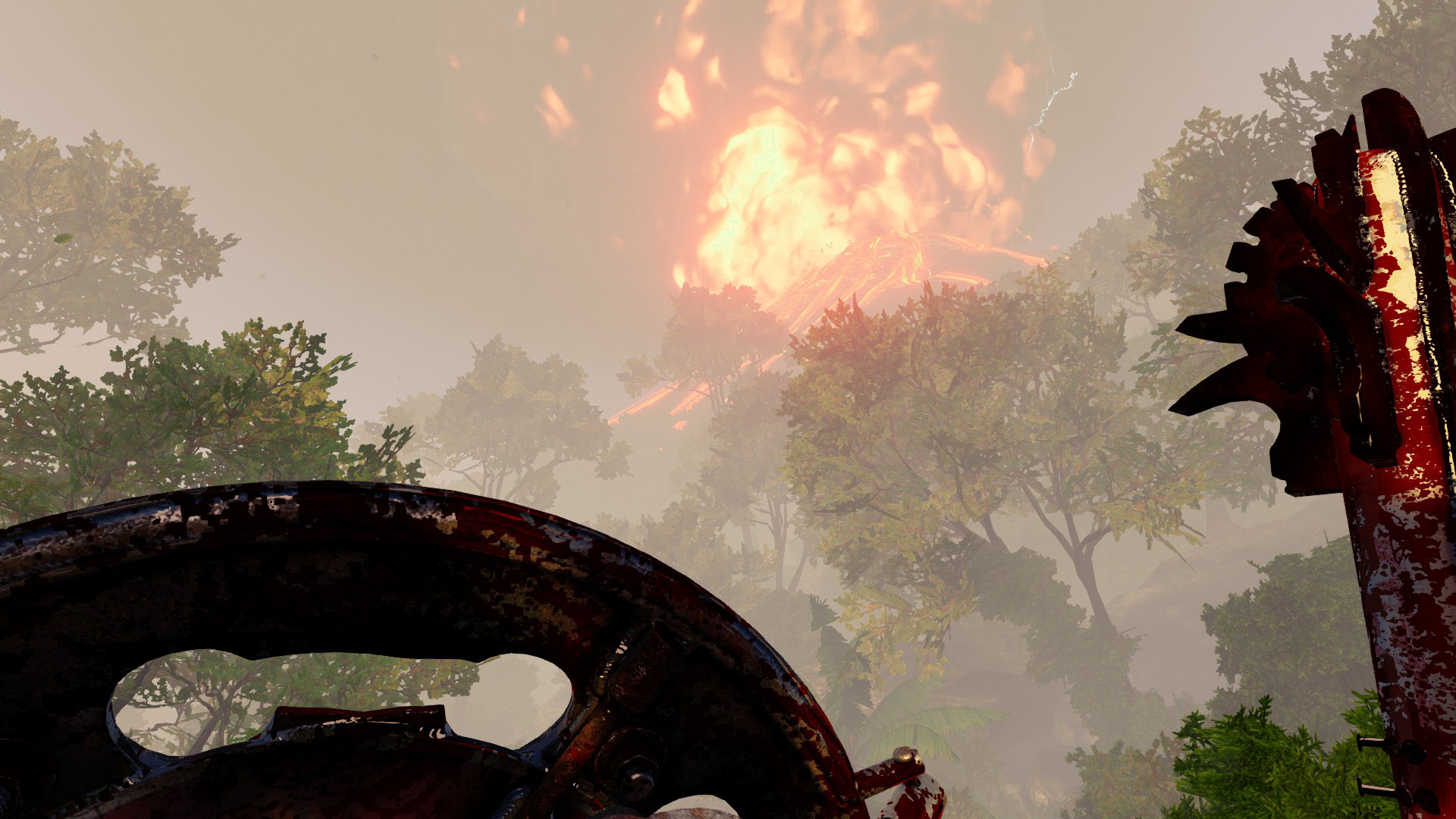 Bringing with it some much-needed sea, sun and sand for its light and warmth-starved survivors, the Tropical Bash free update officially crash landed onto Killing Floor 2 yesterday. I say officially because it has actually been in open beta since before Christmas. Content highlights include a lovely new map plus associated achievements, a zerker weapon, a zed variant, player emotes and a variety of tweaks and fixes.

Alas, the massive plane wreckage spoiling the vista suggests that they might not be there by choice. Besides, even if they do manage to fend off the army of zeds they seem to have brought with them, the huge smouldering volcano looming in the background may still cut their holiday short. Was that an ominous rumbling I heard?

Yes, halfway through the game, the volcano erupts spectacularly, spewing out molten rock and thick smoke that soon engulfs the whole island. Lava pours through the waterways, ash reigns down, lightning strikes above the peak. Though I’m not sure what’s worse: being eaten alive by a horde of demented mutants, or your eyes popping and your skin melting from exposure to the pyroclastic flow?

The play area itself is small, circular and relatively confined – lots of narrow winding paths with just a few small open areas and only a handful of useful choke points. It’s fun, chaotic and dynamic, with the active volcano really adding to atmosphere and changing the feel and visibility in later waves. Definitely my favourite map so far. 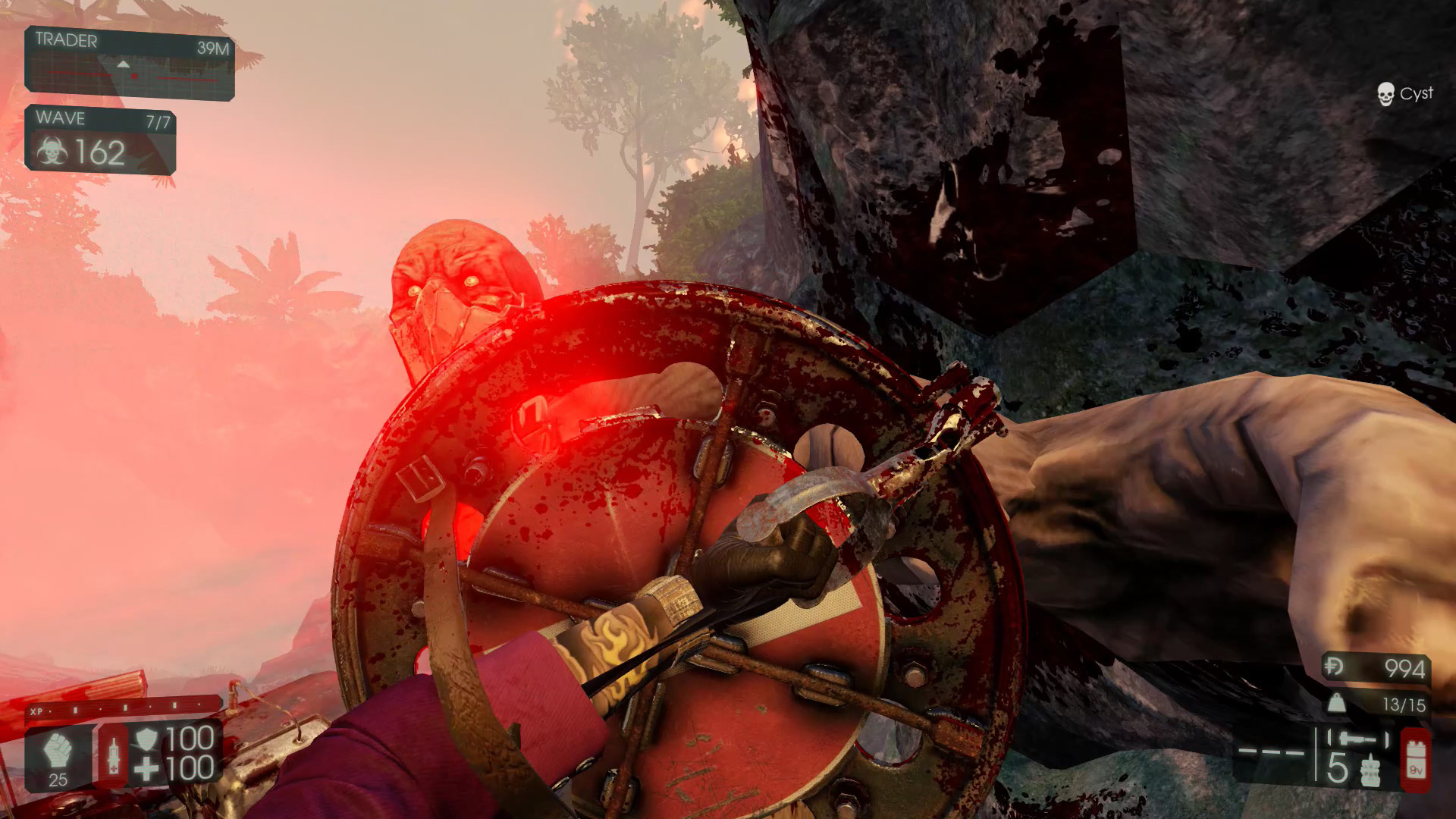 Supplementing the zerker’s arsenal is the arrival of the bone crusher. It’s a mace and shield combo that’s primitive and brutal, yet it’s highly effective and totally in keeping with the twisted world of Killing Floor. It’s a very short range weapon that forces you to get in close and can be played both offensively and defensively.

Powerful light and heavy attacks can be performed with the mace, whereas the shield can be used to parry and bash. In particular, shield bashing is great for pushing back zeds and has a good chance of stunning or knocking over the big boys. Plus, the parry also reduces damage from incoming projectiles. It’s the perfect combo for holding the front line.

Tropical Bash also sees the introduction of multi-perk weapons. In short, it means that some weapons now count as on-perk for more than one class. For instance, the sharpshooter’s buffs are now applied to all pistols, and the support’s buffs are applied to the nailgun, as well as the medic and incendiary shotguns. Though why Tripwire feel the need to further blur the distinction between classes, which already a have little too much overlap for my tastes, I’m not really sure.

Other notable changes include the gorefiend, a tougher and more dangerous but less common variant of the gorefast; player emotes, silly little jigs and animations that you can buy for your avatar and perform during the game; a bit of love for the firebug’s gear; an option to disable that awful auto-upgrade feature at the trader; and an assortment of balance tweaks and bug and map fixes. You can read the full Tropical Bash changelog here. 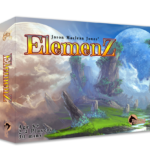 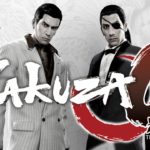