With Mario & Sonic at the Rio 2016 Olympic Games, there were numerous times when I simply wanted to abandon the controller and give up. Instead though, I powered on, forcing myself to give the game a fair shot and hope some nugget of gaming gold might emerge from the dross. Needless to say, it didn’t. This is all the more disappointing given the game’s impressive lineage: Mario & Sonic at the Rio 2016 Olympic Games is developed by Sega and published by Nintendo, the two behemoths of 80s and 90s video games that enjoyed a fiercely competitive rivalry for home console dominance. Mario and Sonic became the mascots for each of these mega brands, and so the Mario & Sonic series, which began in 2008 to tie in with the Beijing Summer Olympics, always felt like a clever way of poking fun at this rivalry.

In case you haven’t guessed from the title, Mario & Sonic at the Rio 2016 Olympic Games revolves around the quest to be the best player in a variety of different sports and win Olympic gold. Like previous entries in the series, the game is essentially a mini-game compilation with fourteen events, or twenty-eight if you include the powered up ‘Plus’ events. After making a Mii to play as and choosing your home country, you’ll partake in this bizarre, playful simulation of elite athletic competition by bashing a button, swiping a stylus, and waving the device around, all in the pursuit of Olympic gold. There are three main playable modes: Quick Play, Road to Rio, and Versus Mode. 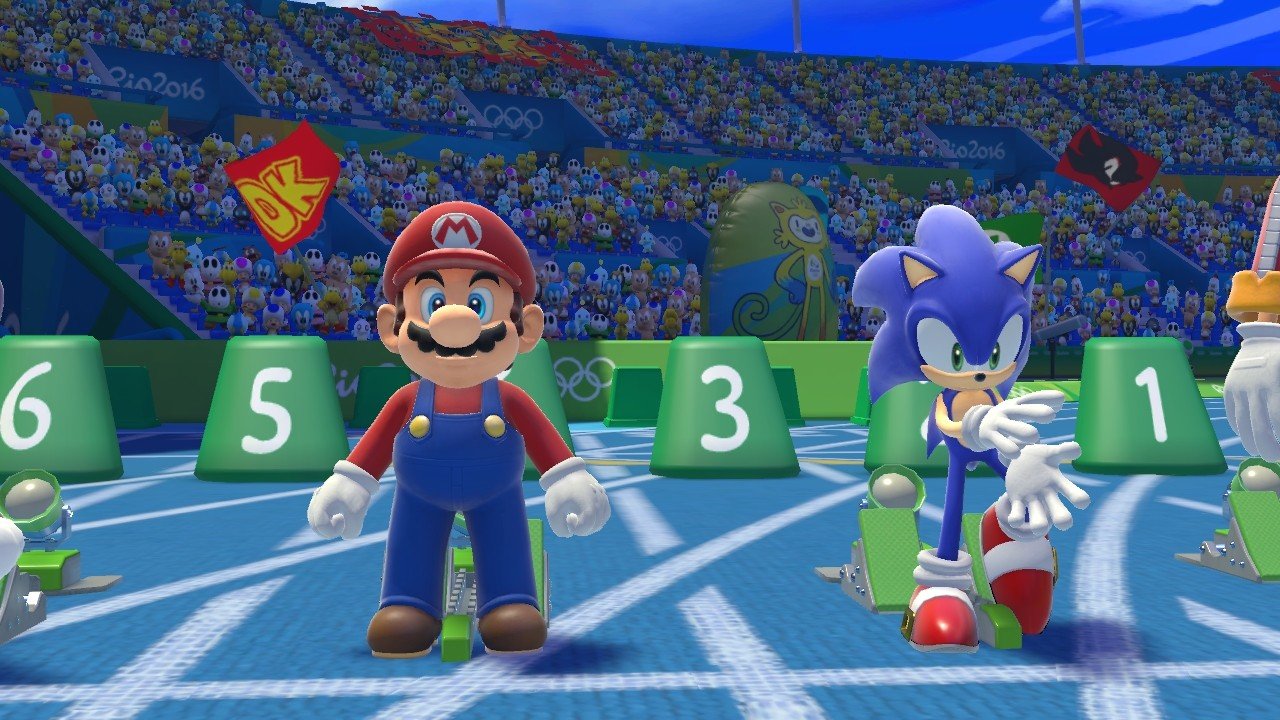 In ‘Quick Play’, all fourteen different Olympic events, including the ‘Plus’ ones, are playable with a huge character roster featuring pretty much everyone from both the Mario and Sonic franchises, with Silver, Jet, Shadow, Yoshi, and Donkey Kong a few of the more notable inclusions. However, for some reason the game limits each event to a choice of six characters, three from the Mario franchise and three from the Sonic franchise, and your Mii, hugely undermining the large and varied roster that should be on the game’s true highlights. While the Plus events mostly play the same as their standard counterparts, there are small differences. For instance, in the Swimming Event, instead of just trying to swim 100 meters faster than your opponents, you have to dodge giant waves created by a Thwomp at the opposite end of the pool.

In the game’s story mode, the aptly named Road to Rio, you’ll play as your created Mii character and get the chance to compete for Olympic gold. However, to stand a chance against the franchise characters, you need to wear certain items of clothing that are earned as you progress. The snag is that to wear such clothing, your Mii needs to be on a certain level, so you’ll need to spend time levelling up in training mode before you even have a chance at glory. You’ll also need to play the story mode in order to unlock nostalgic characters such as Diddy Kong. In this mode, you’ll be given the choice of joining the Mario or Sonic gyms, but this has little impact on gameplay.

Whichever event you’re playing, controls are generally easy to grasp, with the vast majority requiring players to either mash a button (as is the case in boxing, running and badminton) or swipe the stylus (a control method used in the swimming event for example). Finally, there are a few events that use motion controls, with archery being a notable example of this. 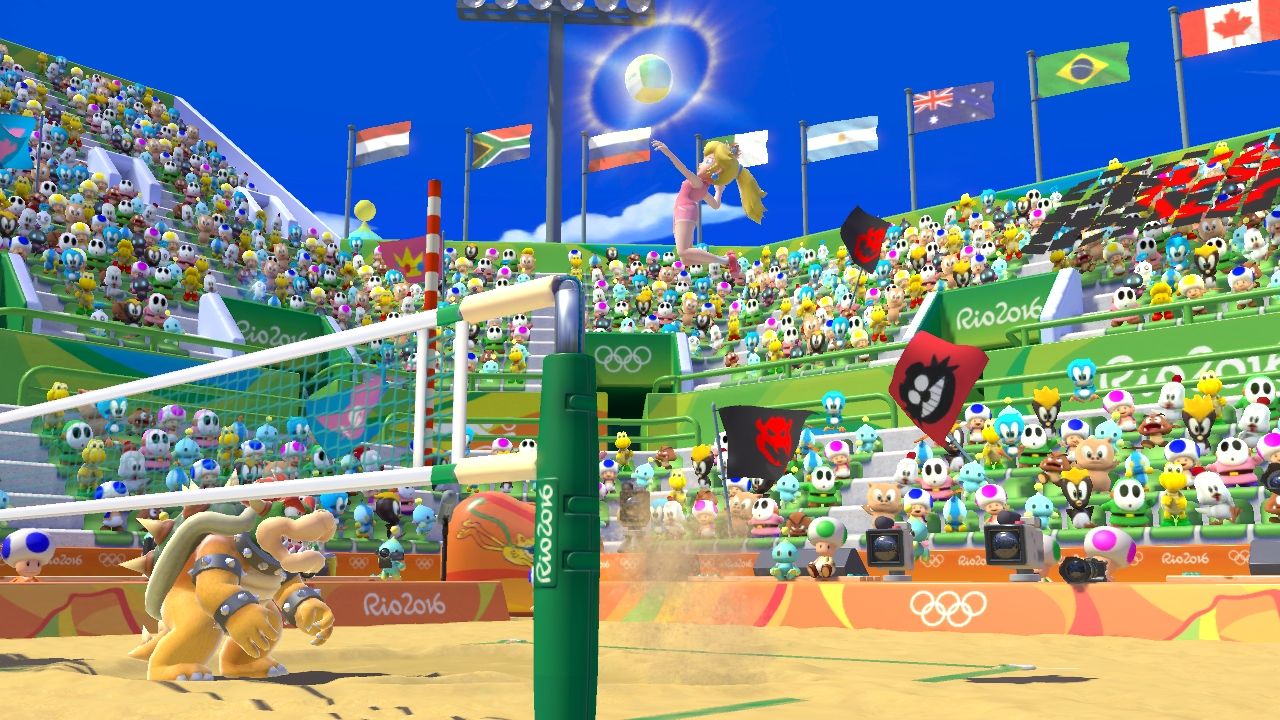 For the first time, golf has been added to Mario & Sonic at the Rio 2016 Olympic Games, an addition likely to intrigue anyone who, like me, has fond memories of Mario Golf for the Nintendo 64. However, the execution is poor, with the tapping and/or rubbing mechanics providing an at best adequate representation of the actual sport, and inaccurate readings of both the lay of the land and your inputs causing you to struggle to measure your swings accurately. This is especially the case when you’re attempting to do a short hit, and I can’t tell you the number of times I went for half power and somehow hit at 80%. This was incredibly frustrating and led to several expletives bouncing off the walls of my living room. Finally, as if all this wasn’t bad enough, over-powerful AIs provide what often feels like an impossible challenge.

The game also includes StreetPass, with the real-life steps taken when your 3DS is in sleep mode equated to in-game steps run by your Mii, and rewards such as special items, special outfits and in-game cash earned for hitting certain daily targets. .

Generally, the graphics in Mario & Sonic at the Rio 2016 Olympic Games look simply stunning, clear and sharp with bright and vibrant colours, although this overall sheen is occasionally let down by choppy character animation.

Another relative highlight is the game’s soundtrack which is generally pleasant to listen to, even if most players won’t really pay attention to it whilst playing.

In conclusion, Mario & Sonic at the Rio 2016 Olympic Games  is poor, with solo play likely to frustrate and bore even the most committed Nintendo addict. Playing with friends can be fun and the graphics are bright and sharp, but there are far too many errors and restrictions that let down the overall experience