American football occupies a strange place in the UK sporting landscape. There clearly is an interest, with the few NFL games that Wembley hosts a season selling out weeks, if not months, in advance, the clamour for a London-based NFL franchise growing steadily and American football teams and clubs existing up and down the country. However, it often feels like an invisible sport, games are inevitably shown on satellite channels in the middle of the night, you’ll rarely see American football being played as you travel the country, and the misapprehension that it’s “rugby with pads on” is still widely held. Rugby is, of course, part of what could be called the holy trinity of British sport, along with cricket and, most importantly, football (soccer), the sport that dominates the national culture like no other. For football fans in particular, American football can seem like anathema, going against everything they prize in their sport. One is, as the Brazilians put it, the beautiful game, a relatively freeform exercise in which moments of individual skill and creativity are prized above all else, where players showcase their talents as part of a broad plan, where the coach’s influence is limited to half-time, full-time and shouting from the sideline. The other is as regimented as a military operation, with each player having a tightly defined role, each play mapped out on paper, the coach moving his players like a general moves his army, each moment of physical brilliance having been planned out in advance. For many this side of the Atlantic, American football seems almost pointlessly complex and obtuse, its mass of diagrams bringing uncomfortable flashbacks to school algebra lessons, its frequent pauses unfathomable, and the fact that games generally take three or four hours incomprehensible.

Naturally, this impacts Madden as, while each iteration of FIFA effortlessly glides to the top of the sales charts, Madden NFL 17 debuted at number five. Of course, as the digital representation of a sport that sometimes seems close to a national religion in the US, Madden is not made for a UK audience, but its niche status among gamers is a real shame as, quite simply, Madden NFL 17 is a fantastic game. 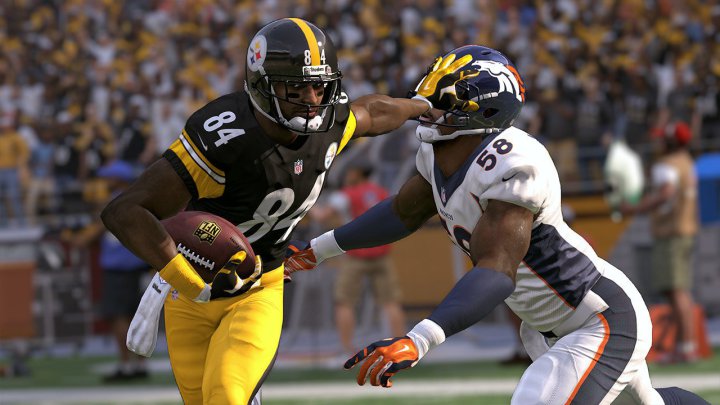 I say this not as a die-hard American football fan but a general sports fan, I know enough to watch and enjoy NFL games but am lost when it comes to the minutiae of the sport’s tactics and rules. Before picking up my first Madden (16, in 2015), I therefore had some concerns about coping based on a sport as complex and tactical as American football, and one that’s tuned for an audience that views such complexities as almost second nature. Thankfully, on top of its other strengths, Madden is surprisingly accessible, with the game’s training mode (the gloriously monikered ‘Gatorade Skills Trainer’) returning once more to teach almost every aspect of the sport, from what each position actually does to how to run a fake kick play and master all aspects of 17’s new kicking mechanics. It does this through a mix of telling and showing, with each technique explained, practised and then tested with a drill that confers bronze, silver and gold medals. Each set of drills and techniques, in turn, earns player packs for Ultimate Team, and once all techniques have been mastered, you can pit your skills against Gauntlet mode, which throws a variety of drills at you and sees how long you can last with three lives.

This year, other features have been added to gently ease newbies in, with running moves such as spins and jukes automatically triggered on lower difficulty levels, defensive play calling simplified, and defensive sets automatically flipped to match the side the offense is targeting. As ever, there’s also the option to simply go with the suggested plays and focus on blocking, tackling, pitching and catching.

On the field, there’s the usual plethora of subtle changes; kicking in particular is now a much more involved process, with a new three-stage meter that’s oddly reminiscent of a golf swingometer. Blocking punts is now also a genuine possibility, with players at the edge of the defensive line able to sprint forward as soon as the ball is snapped to fling themselves in the way of the kicker. It’s a system that works well but may need some extra tuning, with blocked punts currently occurring a little bit too frequently for the game to maintain its claims of realism and authenticity. Other tweaks include moves such as stiff arms, spins and jukes, more naturally matching the physical characteristics of running backs; improved ball physics making tipped passes and attempted interceptions more unpredictable, and a new battle tackle mechanic that has players tap the indicated button to break free or secure a tackle. The series’ trademark presentation has also been given a further polish, with the introduction of pylon cam and wire cam virtual camera angles giving you new views of your plays. 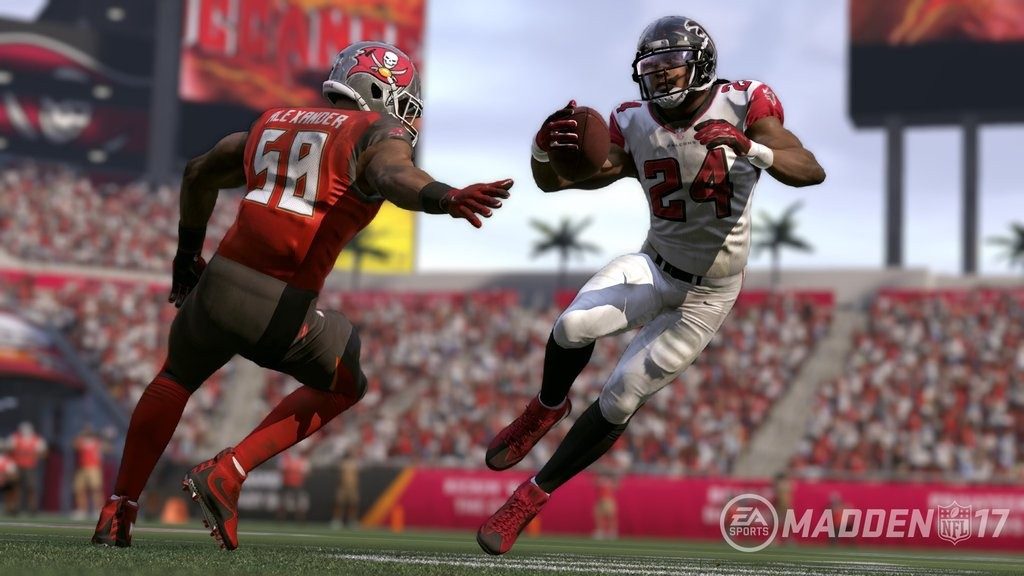 By far the most noticeable change though is in the commentary booth, with long-time duo Jim Nantz and Phil Simms replaced by rising stars Brandon Gaudin and Charles Davis, the latter having just completed his first year as a colour commentator on FOX Sports, and the former having pretty much exclusively called college games thus far. This was not a choice EA made lightly, rather they wanted to fundamentally change sports game commentary, with the choice of relative unknowns allowing them to record hundreds of hours of play calling and analysis and, crucially, have new commentary recorded throughout the season that discusses events and issues in the real-life NFL. Implicit in this is a recognition of the ambition of all sim sports games, to be a virtual continuation of the real-life action, to be a player-controlled branch of the physical reality.

It’s a decision that immediately pays dividends, with my first game on Madden NFL 17 including discussion of the team’s pre-season games and the struggles of the first-choice quarterback (QB). Other games have included similar analysis of the prelude to the NFL season with, for example, the in-team competition to be the San Francisco 49ers regular tight end referenced during a snowy showdown with the Cincinnati Bengals. It’s also already been confirmed that new commentary will be recorded to address the current controversy of San Francisco QB Colin Kaepernick’s decision to sit during the national anthem, hopefully indicating that this new feature won’t shy away from controversial issues involving NFL players. All this would, of course, matter little if the new commentary duo weren’t up to scratch, but every game I’ve played so far suggests they’re a great combination, with their natural chemistry and sharp insight illuminating every on-field encounter. Just as importantly, it feels like EA have given them licence to let their personalities come through, with Gaudin often gently mocking former University of Tennessee safety Davis for his willingness to give the defense the credit on unsuccessful attacking plays. Similarly, a one-sided blowout ended with jokes about stealing each other’s stat sheets, and the aforementioned snow game included the duo expressing a longing to be in Florida, where virtual presenter Larry Ridley is supposedly located. The new system is not perfect, and you will still hear repeated lines of commentary and dialogue exchanges, as well as moments where the game fails to dynamically react to what’s happening on the field. Overall though, early signs are extremely positive and this new approach to sports game commentary should really come into its own once the regular season begins.

Once you long for a more sustained challenge than random exhibition games, Madden NFL 17 more than has your back, with Ultimate Team, Draft Champions and Franchise modes. Ultimate Team works much as you’d expect, with your initially humdrum roster gradually augmented by elite players either earned through hard graft or bought with real-world money. Draft Champions is an interesting addition, an attempt to bring the rivalry and squad picking of fantasy football to Madden, with each draft round offering the choice of three elite players from past and present and the resulting teams then pitted both against the CPU and other players online. This is a fun distraction, but Franchise is where Madden’s most serious players traditionally go and it’s been given an overhaul this year. As ever, players have the choice of going through NFL seasons as a player, owner, or coach, but long requested features have finally been added, with full player editing, practice squads and an in-game live score ticker all making a first appearance this year. There’s also a new Big Decisions screen, which lets you easily decide whether to cut players or rush them back from injury, as well as a new Play the Moments option for each game. This operates in a similar manner to the NFL’s Red Zone channel and allows you to only play the important parts of each game, such as potential touchdowns, defensive last stands and game-winning field goals. With these changes, EA is offering players an unprecedented level of control, a move which is sure to find favour among the game’s legions of fans. 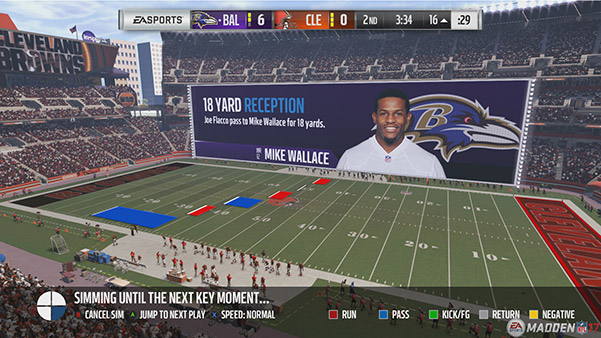 One last thing has to be said about Madden NFL 17, it looks simply gorgeous, with stadiums a riot of sound and colour, curved reflections appearing on players’ helmets, snow games gradually producing a polka dot pattern of cleated footprints, and rain-soaked encounters gradually dirtying kits as tackles fly in and players hit the floor. Just as importantly, the individual players pop off the screen, with every significant play ending in showboating and bravado from one side, and crestfallen disappointment from the other. While this may seem like a little thing, it’s actually vital, adding emotion and passion to every game and stopping them from ever feeling sterile. Collision detection is also generally excellent, with players crashing into each other and the ragdoll physics conveying the impact of each tackle and sack. These also come into play during catch and interception replays, with ultra-slow motion beautifully showing Madden NFL 17’s silky smooth animations as the ball is caught securely by the wide receiver or swatted away by the cornerback. This sheen of quality is maintained throughout, with the training mini-games in Franchise mode bookended by fully animated cutscenes that reflect your performance, and each pack opening in Ultimate Team accompanied by a burst of virtual pyrotechnics. All this visual brilliance does, however, come at a slight cost, as loading times feel a little long at the moment, particularly when all you’re trying to play is a quick solo challenge in Ultimate Team.

Overall, Madden NFL 17 continues the series’ reputation for quality, combining stunning visuals with compelling, accessible gameplay. The well-designed training mode will teach you all you need to know about the intricacies of American football, while Franchise, Draft Champions and Ultimate Team should keep fans hooked throughout the season. It’s the new approach to commentary, however, that really stands out and is the key reason why Madden NFL 17 may end up being not only a great game, but an important one as well.