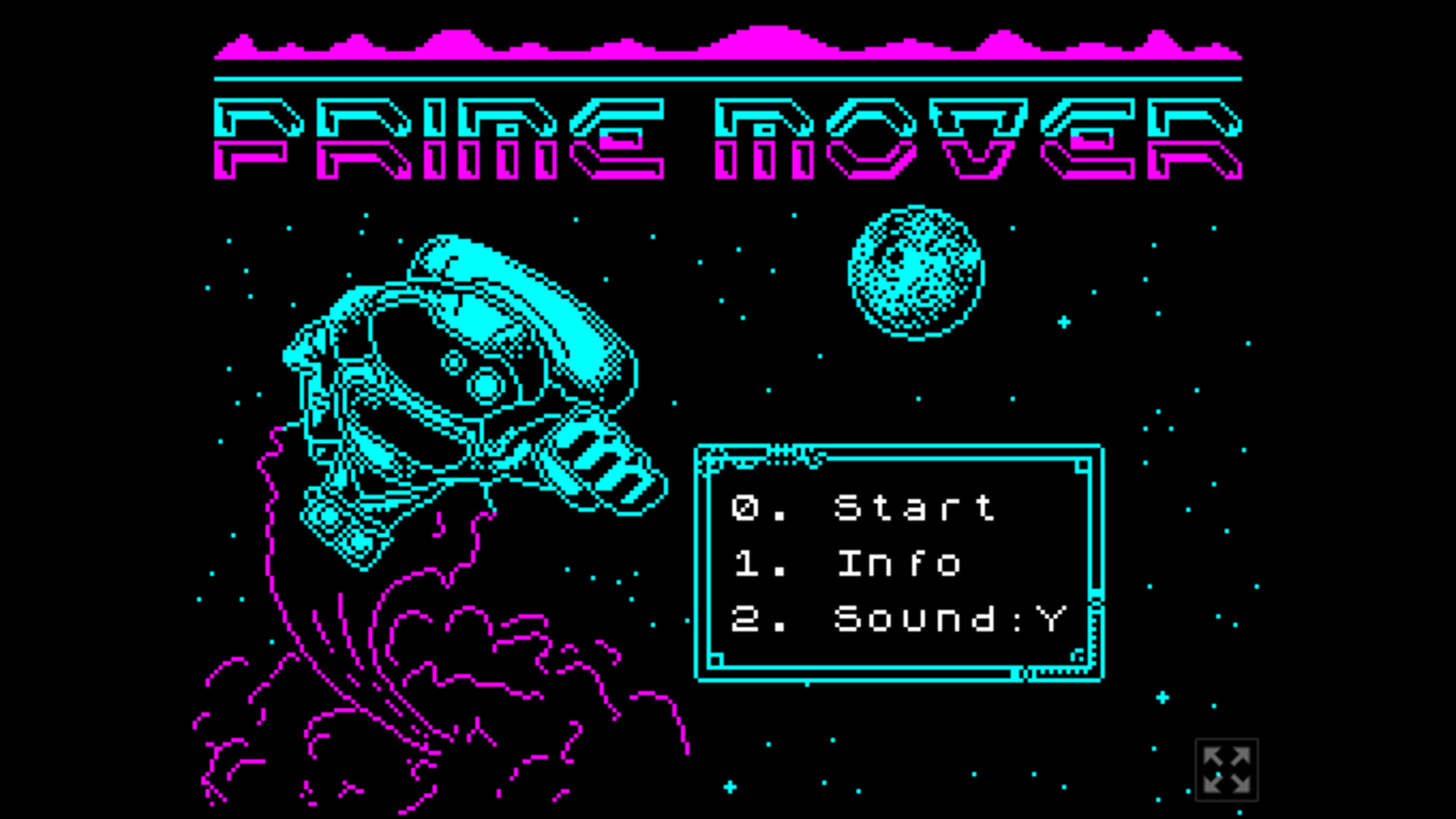 Always short of a few bob and looking for something a bit different, each week I scour the internet for fun, interesting or just plain curious Indie Freebies. Though I reckon I must’ve gorged on far too many member berries these past few days, as all my picks are very retro themed. Anyway, they are: Prime Mover, a ZX Spectrum-style platformer; Bob & Bernard Against the Nazis, an incredibly silly 2D wave shooter; Explodious, a fast-paced twin-stick shooter and homage to early arcade games; and Bitsturbed, an old-school FPS tribute now in its final version. 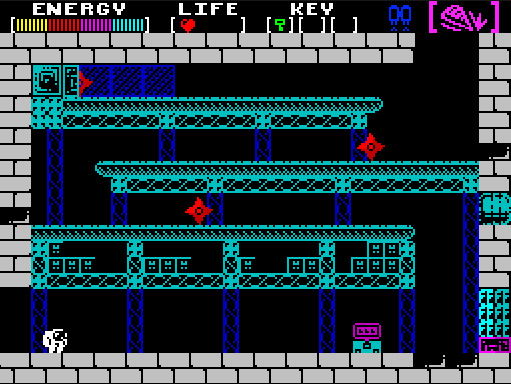 Member the ZX Spectrum? Oh, I member! Well, Prime Mover should definitely get those nostalgia juices flowing. A homage to classic Speccy platformers, it’s got everything that defined the iconic 8-bit machine’s best loved games – solid black backgrounds, gaudy primary colours, huge pixels, blocky sprites, flick screens, and 1-bit sound and music. It even has a fake boot sequence and loading screen, which mercifully only takes a few seconds.

Set in 2155, a mining research facility on Phobos has lost contact with Earth, so you’ve been sent out there to disable the reactor; which I do believe was pretty much the plot of every sci-fi themed game during that era. With just three lives and with three keys to find, Prime Mover’s non-linear gameplay pits you against all the standard Speccy hazards – dripping acid, stompers, spikes, flames, murderous machinery, and lots of nondescript deadly moving things that could be just about anything you’d care to imagine.

As with your typical 8-bit game, it’s far from easy. You’re armed with a rocket pack that allows Jet Pac-style flight and a drill that can break rocks and kill specific enemies (i.e. the red ones). The operation of both relies on an energy bar that depletes extremely rapidly, though it also replenishes quickly when not in use. Speed, dexterity and precision timing are everything. Yet, Prime Mover is not quite as unforgiving as some of its inspirations. You get three continues, extra lives are not uncommon (some can be found hidden behind drillable rocks), and checkpoints are reasonably frequent.

Actually, it’s a brilliant and really well-made tribute, and you’d be forgiven for mistaking this for a real period game. Though the music, which is rather fab, definitely features more than one channel. And, disappointingly, there’s no sign of the Speccy’s legendary attribute clash and no Kempston joystick option (though it does work on modern gamepads)!

Prime Mover is a browser game that can be played for free on Game Jolt here.

Bob & Bernard Against the Nazis 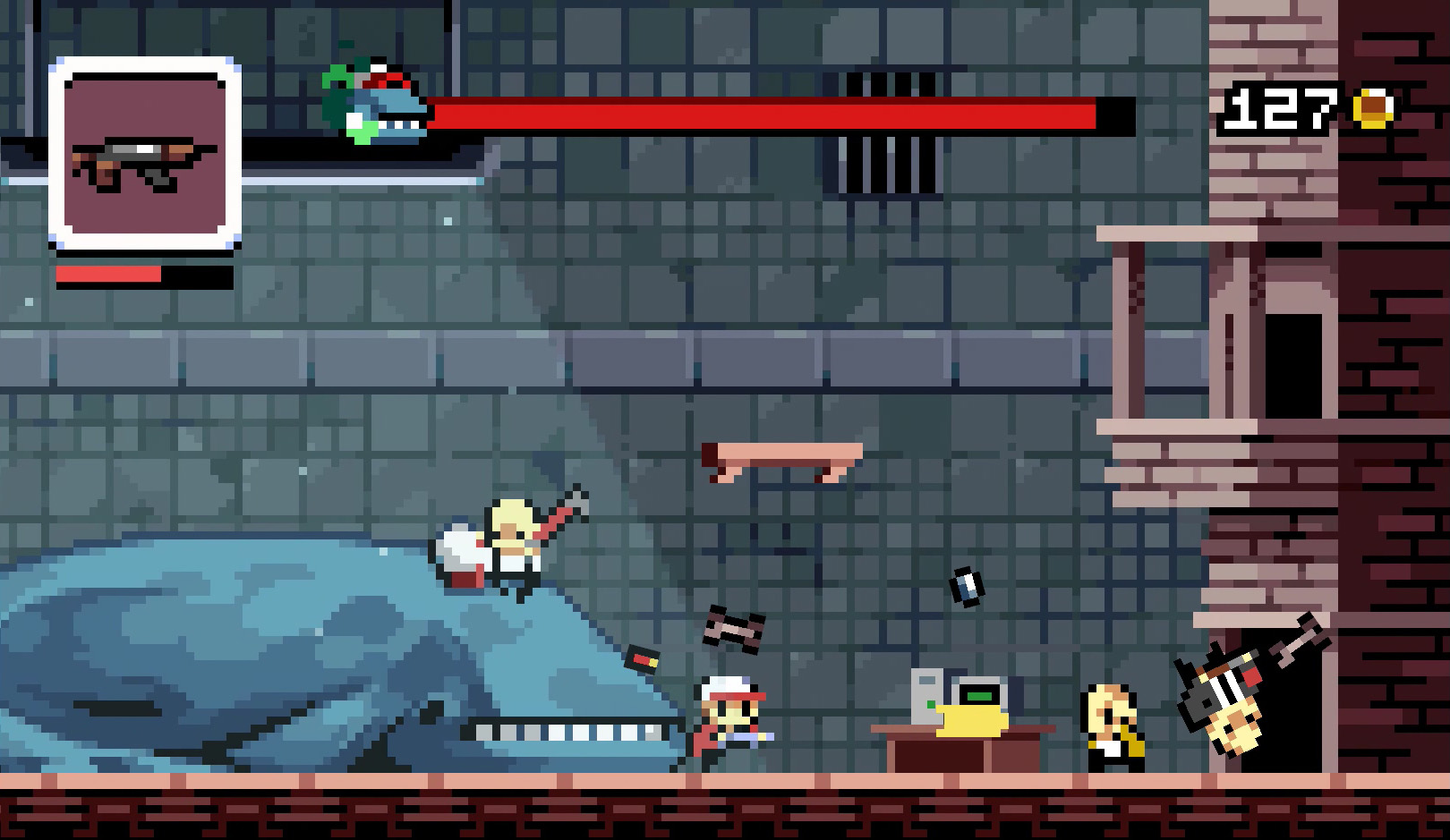 So, little Bob has bought a whale named Bernard on eBay, and they’ve become BFFs. Everyone go “awwwweee”! But what’s that: Evil Nazis are jealous of their friendship and have decided to kill Bernard at all costs? God damn evil Nazis, I hate those guys, always trying to wreck everyone’s fun and thwart wholesome inter-species relationships!

Yes, Bob & Bernard Against the Nazis features one of the most ludicrous plots ever imagined, well at least outside of the Metal Gear Solid franchise, but it made me chuckle, so that’s all that matters. I always was a sucker for cheesy whale-based puns.

Blending cutesy 16-bit-style visuals, platforming and shooting mechanics, it’s a kind of tower defence game. The aim is to defend Bernard from a succession of increasingly difficult waves. The party-pooping fascists pour in from both sides, though some, like snipers and bazooka troops, are definitely a higher priority. Strangely, they all completely ignore you, focussing only on the poor whale – so they’re just as stupid as they are evil. The break between waves is then used to heal Bernie, by dousing him with water, obviously, and spending your hard earned Nazi gold on better weapons from eBay.

It’s quite fun and a lot of daft, with amusing exchanges between Bob, Bernard and the evil Nazis. Unfortunately, it’s not very well balanced, and the novelty value does wear off quite quickly. The only option for defending the side you’re not on is mines, and they’re far more effective when thrown like a grenade into crowds. It also requires a lot of trigger discipline, as weapons overheat very quickly and cannot be fired again until fully cooled, whereas recoil pushes you off ledges far too easily when trying to take out those pesky snipers. And there’s just not enough time between waves to heal Bernard if he has taken a real beating.

Still, it’s just a prototype, and I do think there’s a base here for something a little more solid.

Bob & Bernard Against the Nazis is available for Windows and can be downloaded for free from either Game Jolt here or itch.io here. 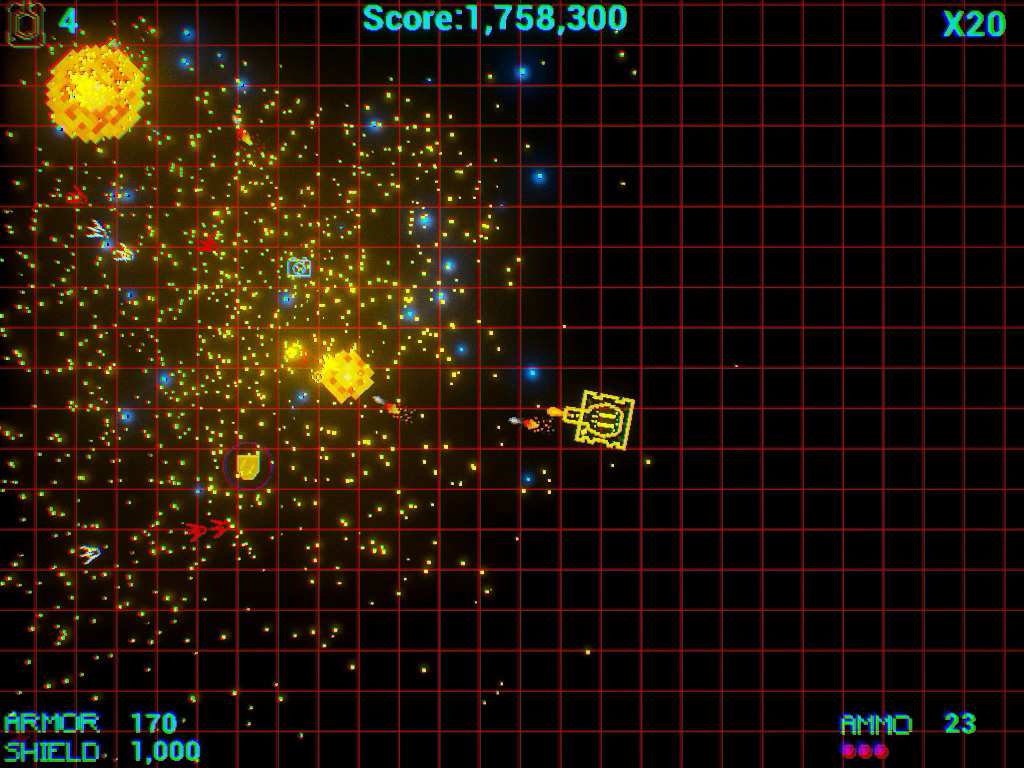 Calling Explodious a passionate love letter to 1980s arcade machines would be something of an understatement. With its ridiculous name, 4:3 aspect ratio, multicoloured glowing neon, wireframe sprites, gridded backdrop, and pumping synth music, it almost verges on parody. Yet, I don’t think I ever played a modern game that comes closer to capturing the purity of the earliest shumps.

A top-down twin-stick arena shooter, Explodious excels in its simplicity. Confined to a single screen and with finite but replenishable supplies of ammo, bombs, shields and armour, you and your tank face a seemingly incessant and ever increasing onslaught of soldiers, homing missiles and enemy vehicles. There are millions of points to rack up, over-the-top pixel explosions, and pick-ups and power-ups galore, including new weapons, speed boosts, screen detonations, score multipliers, and my personal favourite, time dilation. And yes, it eventually climaxes in a huge boss fight.

Explodious is frantic, challenging and infuriatingly addictive. Stop moving for a second and you’re dead. Though it’s by no means impossible. The trick is picking up and sticking with the right weapon (hint: the plasma gun is a little overpowered). Pulling it all together and sucking you in is the phenomenal soundtrack – energetic and operatic, it’s on par with those from the likes of Far Cry 3: Blood Dragon and Hotline Miami.

Explodious is available for Windows and can be downloaded from Game Jolt for free here. However, if you want to support the developer and loved the music, then the soundtrack is available to buy from bandcamp here (I did!). 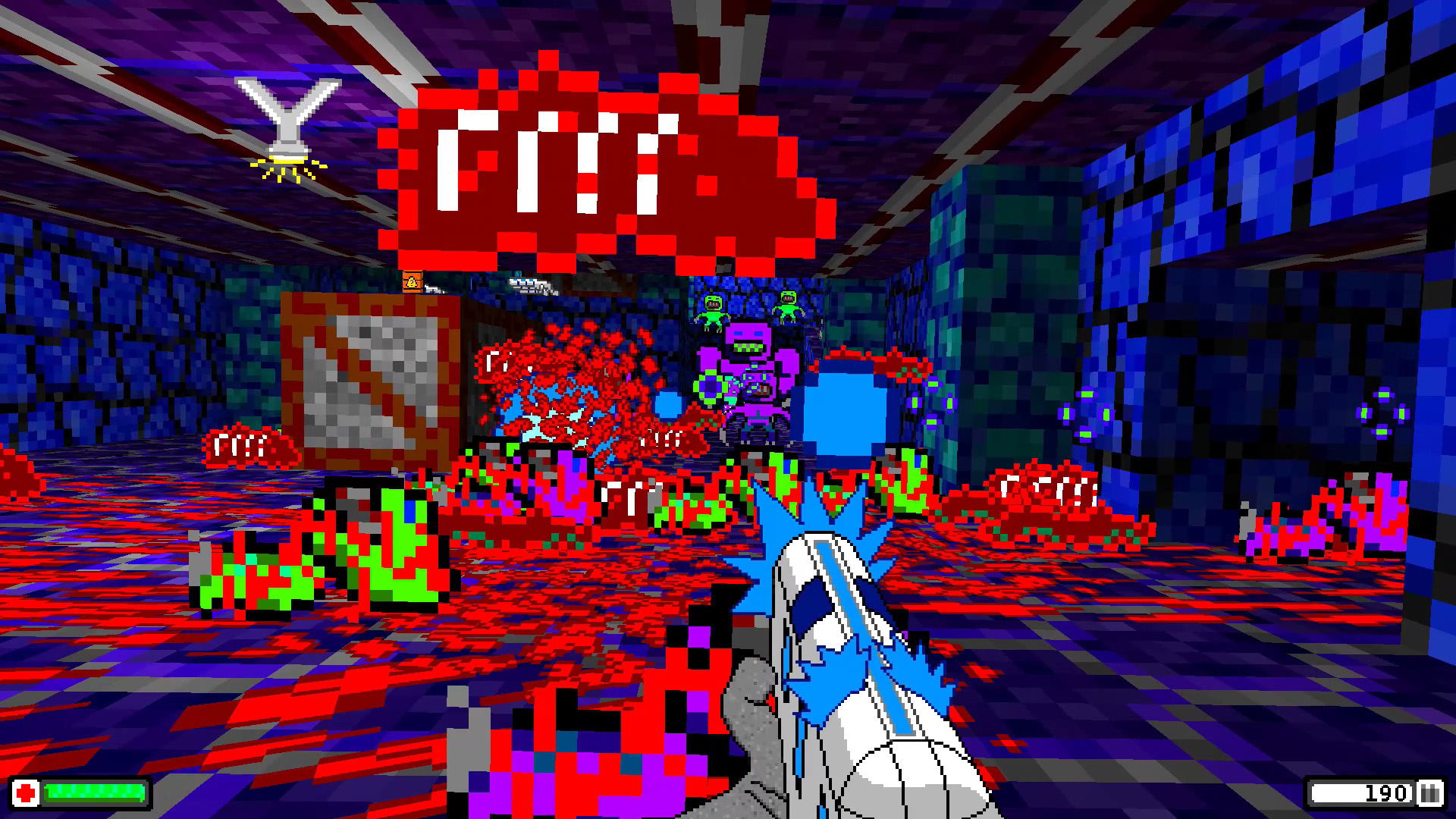 Bitsturbed is an indie freebie that I’ve covered a couple of times back when it was in its alpha and beta stages. Just to recap, it’s a retro-styled FPS with more than a hefty nod to genre pioneers such as Wolfenstein 3D, Duke Nukem 3D, and the original Doom. We’re talking scaling 2D sprites, life bars, health and ammo pick ups, exploding barrels, over-the-top gore, and weapons coming out of your arsenal. But instead of Nazis and minions from hell, you’re laying to waste a legion of adorable Mega Man-inspired baddies.

Well, after two years of development, Bitsturbed has finally graduated to version 1.0. It now has a story, three difficulty levels, a save function, and loads more weapons (including the RBW – really big weapon!), levels, baddies and boss fights, offering an hour or two’s worth of gunplay. If you love old-school FPSs, Bitsturbed will definitely help satiate those member berry cravings. It’s fun, fast-paced, reasonably challenging, looks great and has a rocking guitar soundtrack. Plus, it features all your favourite era cliches and tropes, and it’s not afraid to make fun of them – “An ominous ammo cache! How ominous!”.

Bitsturbed is available for Windows and can be downloaded from Game Jolt for free here. 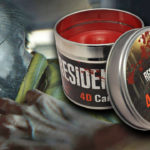 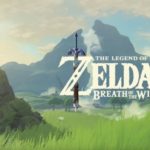 How The Legend of Zelda: Breath of the Wild Can Reinvigorate the Series