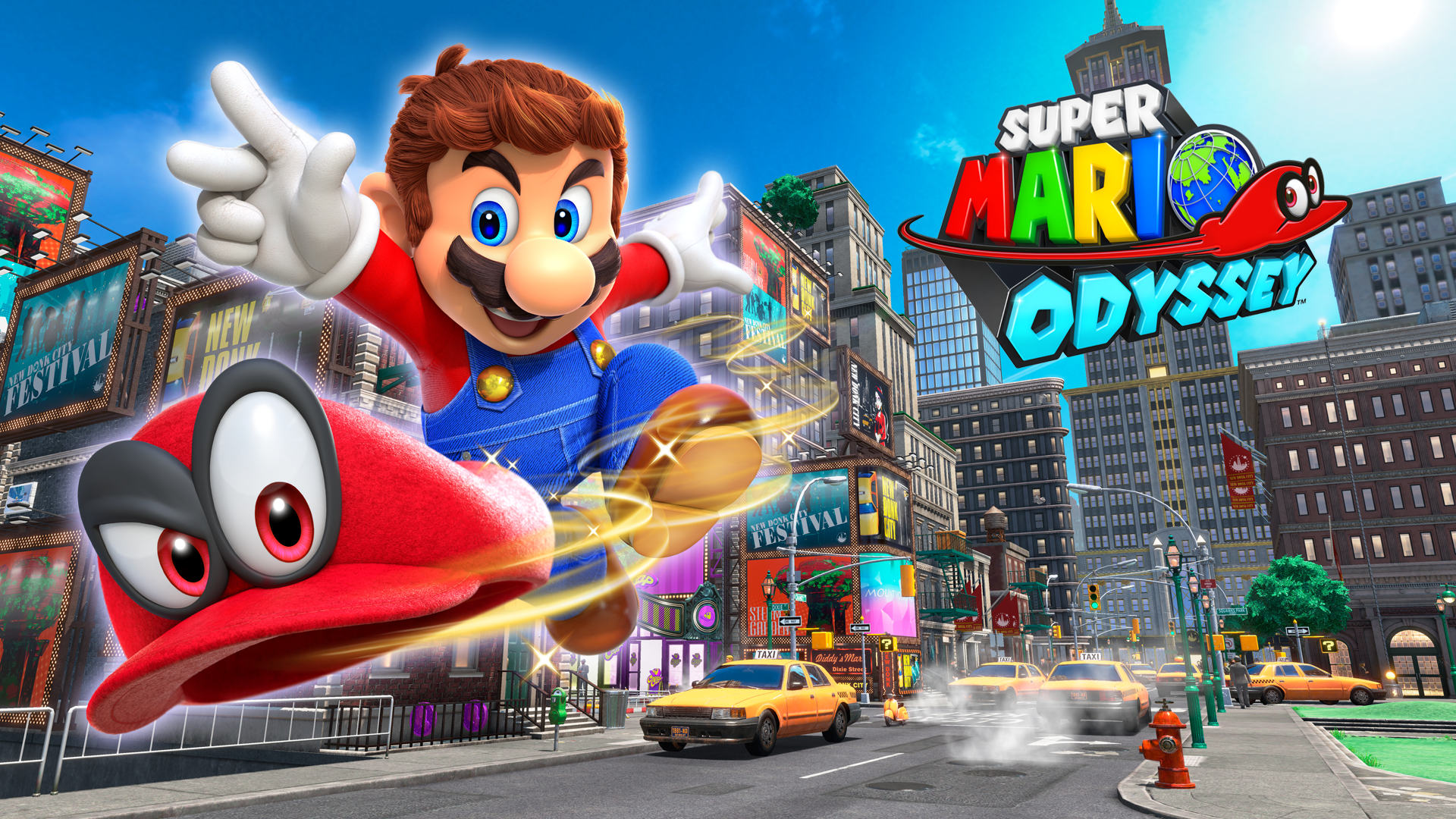 Many will agree an open world game lives and dies by its world. Whilst Super Mario Odyssey’s vast array of kingdoms is only one facet of its charm, it’s nonetheless an integral part of what makes the game so enjoyable for me. In a genre seemingly solely populated by green fields and snowy mountains, Odyssey’s wacky worlds stand out as something that, throughout my 40 hours of playtime, I never got tired of exploring. 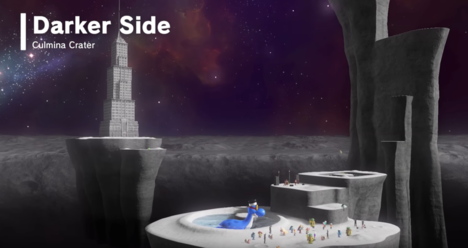 The final kingdom for Odyssey is a special one. However, unlike the rest of the kingdoms on the list, it introduces no new capturable enemies, hence why it’s so low in my rankings. That’s not to say the kingdom’s gameplay is a re-tread of the rest of the game though. Like almost every other Mario game to date, Odyssey concludes with a final stage that is a platforming gauntlet challenging every skill you’ve developed over your adventure. As such, it’s the longest level of its kind in the game, constantly pitting you against different challenges over its 15-minute length. Not content with simply creating more difficult versions of older challenges, the final level further expands on these old ideas, from forcing you to use Glydon in conjunction with updrafts to gain height whilst avoiding enemies to timing your jumps with lava bubbles to avoid rotating spikes. These new twists ensure that Odyssey’s final level is a brilliant swansong for Cappy and Mario’s adventure, never becoming too boring even after the few dozen times I had to retry it to finally complete it. 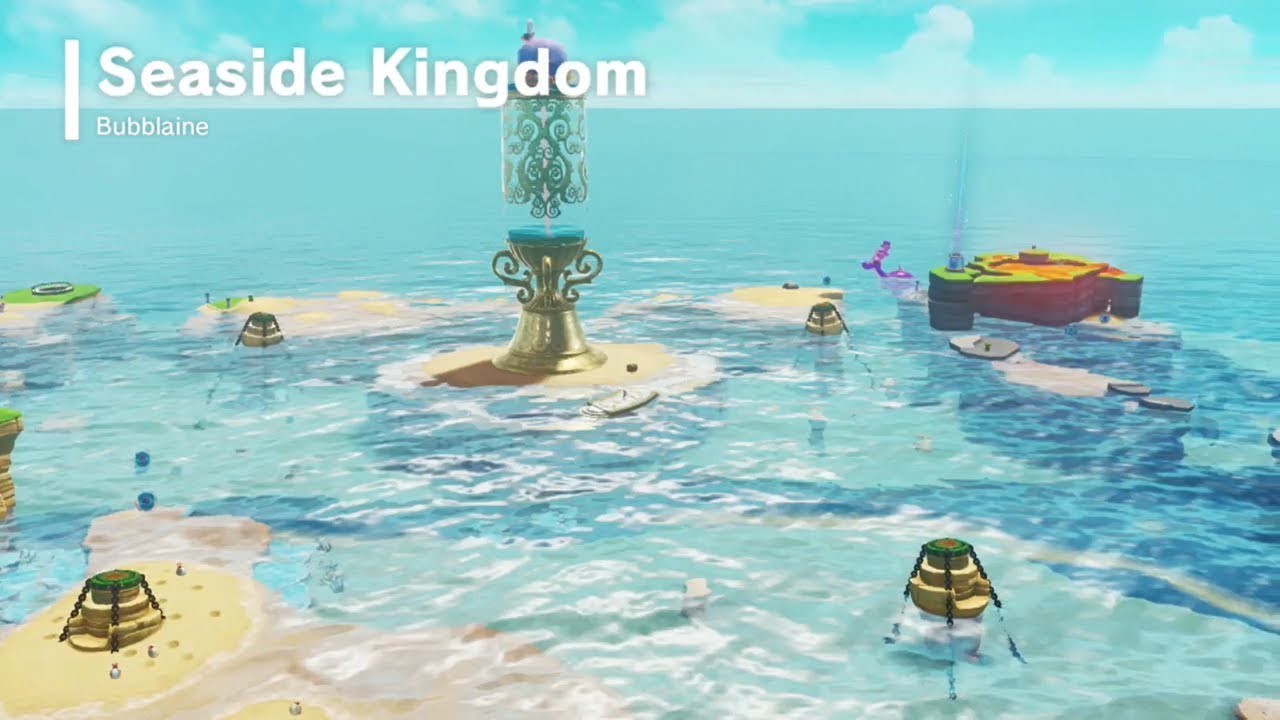 Water levels often get a lot of flak in platforming games, and normally this criticism is well founded: Swimming controls are often so clunky that precise movements are near impossible. For, essentially, a giant water level to be one of my favourites in the game is, therefore, no small feat. The Seaside Kingdom is stunning – a tropical paradise with a giant fountain in the middle.

As well as the beautiful vista that fills your screen when you arrive in the kingdom set against a picturesque setting sun, the kingdom is, as with most of the game, filled with nooks and crannies to explore. Unlike most of the rest of the game, however, these areas are largely separated into land areas (islands dotted about the fizzing seawater) and a vast underwater area, essentially giving you an even larger sandbox to explore. This approach is similar to Odyssey’s other water-based level, the Lake Kingdom, another stellar level, but personally the Seaside Kingdom just edges ahead thanks to its, in my opinion, nicer looking setting and better level design. In comparison to the Lake Kingdom, the Seaside Kingdom has more enemies to possess, with Mario able to once again capture Cheep Cheeps to swim about – helping to alleviate the issues I normally face with underwater controls. This time, however, thanks to the help of the kingdom’s local wildlife, Mario is also able to quickly jet about on land, using the captured enemy’s water jets to soar from island to island. Couple this with some neat challenges requiring the use of these bizarre enemies to soar up to higher platforms and a boss that excellently uses this mechanic, and the Seaside Kingdom lands itself as one of the highlights of the game. 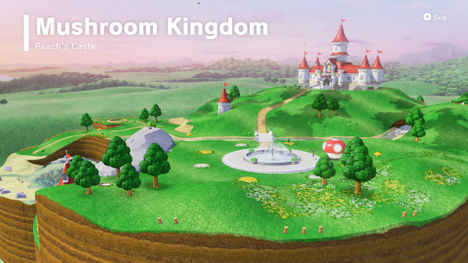 It’s unsurprising that the world Mario’s first 3D adventure took him to, one which has always been a staple of the series, would reappear. The Mushroom Kingdom, like the festival found in the Metro Kingdom, is a celebration of all things Mario, unlocked as a reward for completing the game’s story. As such, it contains the game’s last new capturable enemy, Yoshi, who can be used to climb walls using his tongue, presenting yet another unique gimmick. New collectibles are also strewn about the level in the form of apples which the green dinosaur can eat to satiate his hunger pangs, eventually producing power moons after he’s eaten enough of them.

In addition to the new form of collectibles, power moons are, of course, hidden in nooks and crannies throughout the level, including in towers across the area surrounding the castle. By entering these towers, you can rematch bosses encountered throughout the game’s story with some neat twists added to make them harder and otherwise spice them up. In many other games, this would be a bit tedious, but given the breadth and scope of the wacky monsters that feature as Odyssey’s bosses (as well as how quick most of the fights previously were), it’s a welcome addition to round out the game.

Of course, the Mushroom Kingdom contains more nods to previous games in the series than its name alone. It’s the nostalgic nods and references peppered throughout this kingdom that make it so enjoyable, especially compared to many of the completely new kingdom designs. Yoshi’s house returns in a secret area accessible through a painting in another kingdom, but the bulk of the kingdom’s neat little references are to Super Mario 64, Mario’s first 3D outing and a game that Odyssey is a spiritual sequel to. A costume purchasable in the kingdom’s shop allows Mario to look just like his angular 64 model, as well as granting him access to a secret area that looks as if it were ripped straight from that game. Of course, the kingdom is also beautiful, with picturesque green fields and renditions of some of the key landmarks of Mario’s history, like Peach’s castle, looking better than they ever have. 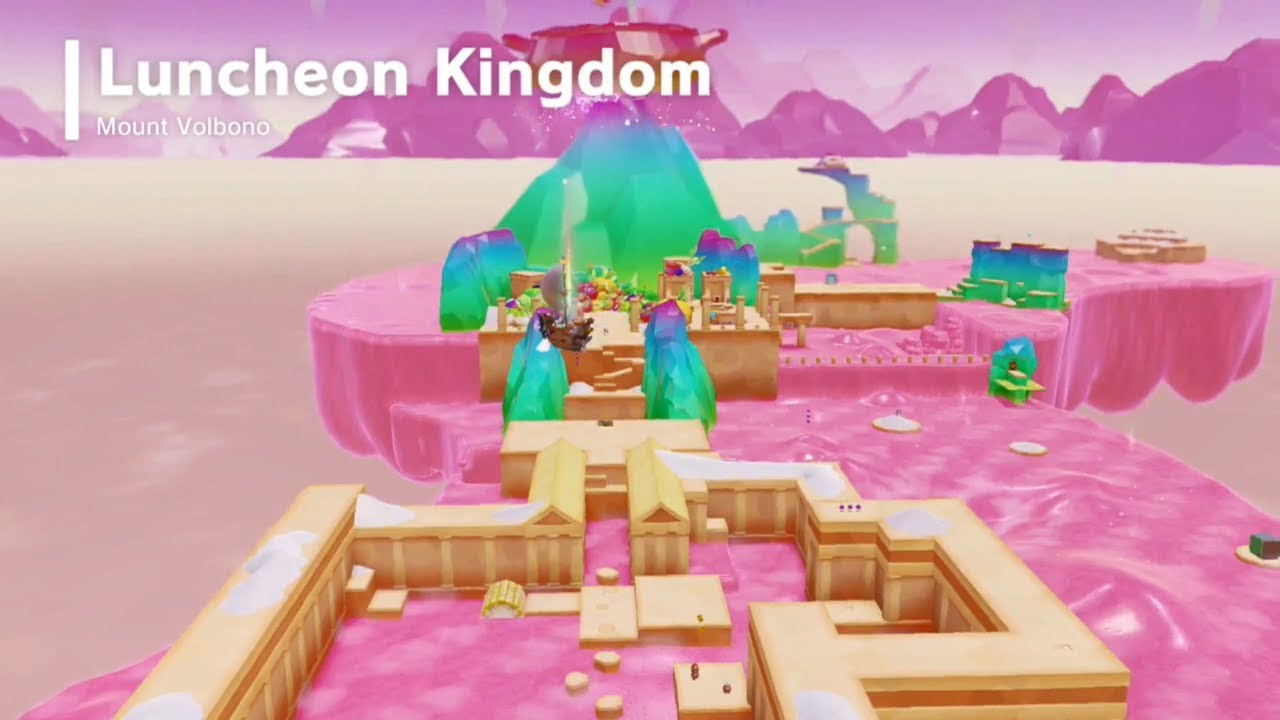 The Luncheon Kingdom, as will prove to be a trend on this list, presents an idea unique from the rest of the series with their standard cast of grassy planes and snowy mountains. Far from just capitalising on the wacky idea of a world filled with gargantuan food, it further expands on this wackiness with the inclusion of strange fork creatures that are native to the land and a beautifully voxel-based visual style drenched in some of the brightest colours my TV’s screen can push.

Basking in the spectacle of the massive food against the active volcano is unique enough, but this is coupled with a myriad of options for platforming based around the idea of food. The members of the kingdom’s fork-shaped population unlucky enough to be attached to walls serve as elegant tools for scaling walls in one gargantuan flick. Pink lava can be traversed thanks to capturable lava bubbles which can also be used to break through the food cooking in the brightly coloured fluid, and the kingdom’s pan-wielding Hammer Bros. serve as makeshift miners using their projectiles to chisel away at the ridiculously solid cheese blocks that litter the landscape. 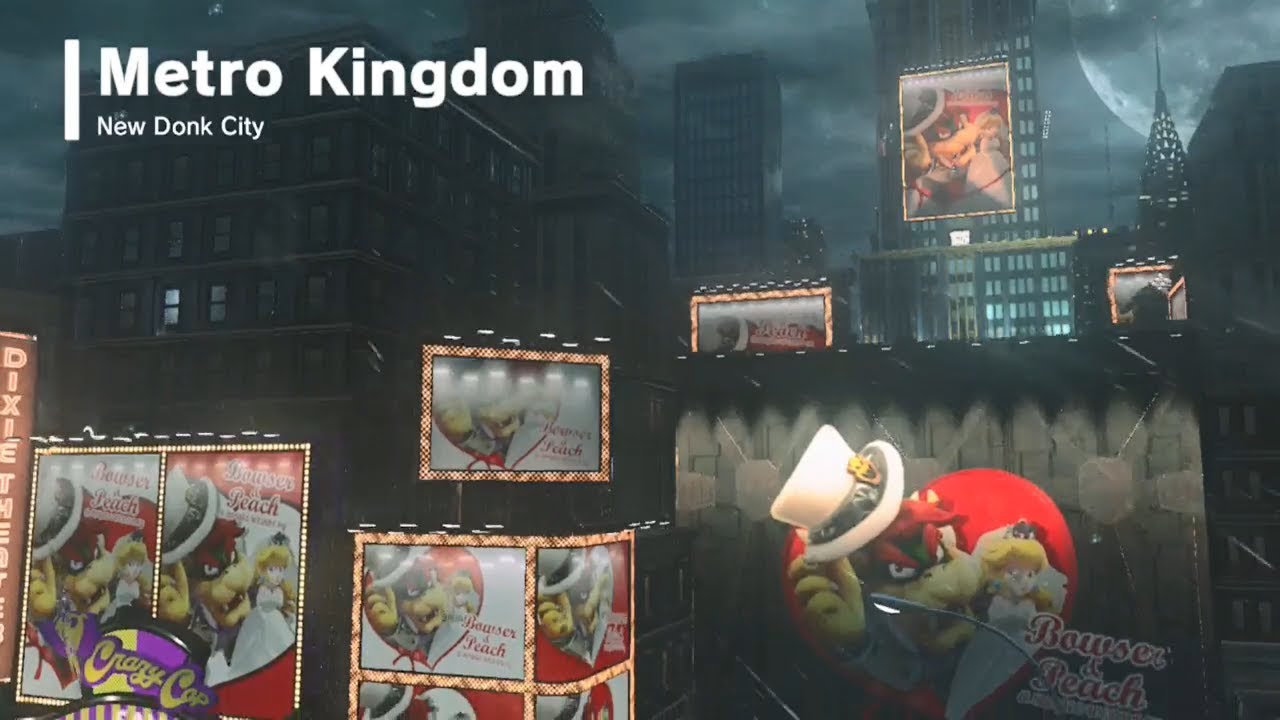 Several hours into the game, our moustachioed protagonist’s adventure take him to the Metro Kingdom, a cartoony and condensed take on New York featuring all the skyscrapers, taxi cars, mopeds, flashing billboards and (strangely realistic) people you would expect. It’s unsurprising that Odyssey’s flagship kingdom, the one that featured most heavily in Odyssey’s marketing, is the best the game has to offer. From the get-go, Nintendo’s confidence in the Metro Kingdom level was obvious, being the first real glimpse of Odyssey we saw, it perfectly encapsulates Odyssey’s core philosophy, a unique and fresh Mario game. Few would have envisioned Mario venturing from his normal cartoony landscapes and returning to New York after his bizarre live action TV appearances of the 90s, but it’s this uniqueness and unexpectedness that is the basis of Odyssey.

Not only is the landscape something that is unique, it also presents a large sandbox to explore. Your first visit to the city is fairly linear, placing you in a version of the city filled with enemies, but it soon opens up. More so than any other area in the game, the map is particularly vertical, with skyscrapers to climb almost everywhere. That no one has previously thought to set a Mario game in such an urban area is surprising as it’s a natural fit for the genre, with the pudgy plumber able to use his array of abilities to scale the buildings, haphazardly climbing higher and higher above street level to find an assortment of collectibles. Finding new ways to scale the skyscrapers is tremendous fun, with a particular highlight being getting to the top of the tall town hall to the back and ascending the pole at the top to get a view of the entire kingdom.

Of course, another highlight of the level is the celebration, where the game’s toe-tapping main theme serenades a nostalgic 8-bit section as you run and jump along the sides of skyscrapers. The climax of this ends with a remix of the original Donkey Kong game, as you ascend the side of the city’s town hall dodging barrels to defeat Nintendo’s famous monkey. It could be accused of being yet another attempt by the company to capitalise on nostalgia, but most of those who have played it can agree it’s ridiculous fun, spinning a novel twist on the plumber’s first adventure with yet another of the series’ catchy melodies blasting away in the background.

This list was a hard one to make, and I’m sure most will disagree with at least one of my picks, which is a testament to the quality of Odyssey’s kingdoms which have some of the best worlds the Mario series has ever featured. 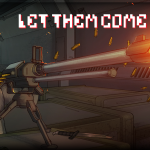 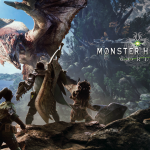