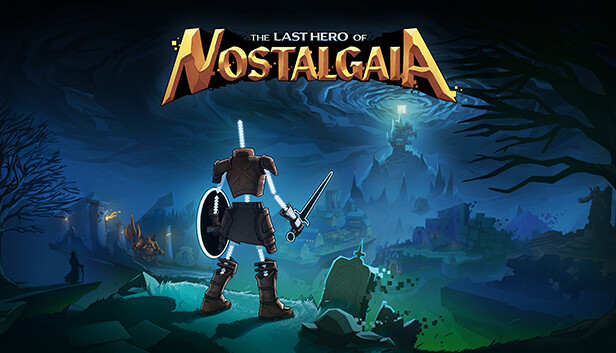 The world of video games is on the brink of collapse. Nostalgaia’s heart has dwindled to nearly irreparable measures, and only one hero can save it: a faceless, voiceless stick figure made from pixels. In this love letter to the Dark Souls franchise, The Last Hero of Nostalgaia is a game within a game riddled with fourth-wall breakers and satirical comedy elements. Players will need to traverse a disintegrating, dangerous landscape whilst being taunted by a narrator playing God, pulling the strings along the player’s adventure to save their world and bring back order to Nostalgaia.

Before I began my no-hit run (I wish), I was greeted by one of the most intricate and detailed character customization screens in recent memory. There were so many options to choose from, such as skin type, height, age, and more. Our pixelated hero can be switched between a young white stick figure, an old white stick figure, a male or female white stick figure, and best of all, a very, very, very white stick figure. You really thought a game like this would let you create the most handsome being in all of Nostalgaia? Yeah, so did I. We settled in with the comedy right off the bat, but the real customization comes from the actual large variety of weapons and armor that can be equipped by the player as they progress through the game. Once you’ve spent your 30 seconds fiddling with the customization sliders, you can choose one of five classes that favor certain individual stats. One example is the Randomaster, the walking four-leaf clover metaphor that thrives on luck, a surprisingly useful stat that enhances gameplay elements for the player. For instance, the higher the skill, the more attributes are made available to the player, such as the ability to take no damage or harvest twice as much memory (the in-game term for experience) than usual.

Everything you need in a Souls-like is evident in The Last Hero of Nostalgaia. Our beloved bonfires are replaced with beacons, Estus Flasks have become Hero Icons, and there’s even a small hint of Dark Souls II inspiration with Green Herbs, acting like Lifegems with a curious description related to a well-received horror franchise. Enemies can kill the player in just a few hits, and with limited healing, sometimes being chased on low health feels more tense than the biceps of the world’s strongest man. As stated above, the game’s only safe havens are beacons scattered around Nostalgaia. However, players can forget about fast-traveling from one beacon to another as they can only tether themselves to said checkpoints, allowing for quick access to a single, previously explored area to search for secrets or farm for materials. The downside to this mechanic is players must constantly run back and forth between areas, which can be a drag if one has teleported from a late-game area to an early-game one. Luckily, the game provides shortcuts in the form of corridors and elevators that can quickly get players back to their chosen areas. The trick to these is just figuring out where all of these shortcuts are, in addition to the fact that most corridors have the same exact aesthetic, and it can be confusing as to which shortcut will take players to the right area.

The Last Hero of Nostalgaia is teeming with a huge assortment of weapons and armor that the player can equip. Crush enemies with hammers, slice and dice foes with swords, or stick them a new one with daggers. The heaviest armors have the best physical defense, some give better resistance to magic (known in-game as Source), and others may as well belong in the fashion souls category, including a pair of spectacles and a funny pair of briefs. One main difference that sets The Last Hero of Nostalgaia aside from other games is Remembrance. Many of the items in Nostalgaia have lost their essence and are fading, being reduced to 8-bit texture models. Heroes of Nostalgaia can explore the world and find certain locations of memory and help the item to remember what they once were. In doing so, the player can simply open their inventory once close to the precise memory location, float over the forgotten item and choose to Remember to bring the item back to life. In doing so, this strengthens the item and allows for additional attack opportunities, and it increases the attack power of weapons whilst improving the physical damage degradation of shields. Written within the lore of each item is a clue to where the memory is located, encouraging further exploration, and after a specific number of items are Remembered, the player gains Insight bonuses, enhancing gameplay even further with better equipment loads, increased maximum health, and many other rewards.

Plenty of Pixels to Spill

Nostalgaia is brimming with dangerous foes just itching to take our hero down. For example, smaller mob enemies range from zombie-like, sword-wielding maniacs to more mythical beasts, like gargoyles and werewolves. Many enemies take their homes within individual locations around Nostalgaia. For instance, goblin-like foes that have the ability to transform into cardboard animal cutouts to confuse the player roam the lands of the Warlock Wilds, whereas flying gargoyles and source-devouring humanoid monsters stalk the halls of Festival Row. Boss enemies are few and far out but are surprisingly tough, despite the fact that the game definitely seems to prioritize its satirical elements. As much as their appearances are memorable, their names are not. One simple but humorous title is Gnom, the Consumer, a hulking beast that dances around the arena, looking like the flamboyant cousin of Smough from Dark Souls. I, however, challenge anybody to perfectly pronounce the name of the main Keep of the Stolen Crown boss without late-game areas including bosses that resemble simple NPCs with inflated health bars, indicating that maybe the developers ran out of ideas for unique encounters or ran out of time in the development cycle. Regardless, most of the actually unique boss encounters feel good to experience, especially the swifter variety that keep the players on their toes.

Souls-likes have become a huge main staple in 2022, and I can’t get enough. As one of my favorite genres in modern gaming, the souls-like has manifested another fantastic entry in The Last Hero of Nostalgaia. It’s a different kind of RPG, taking a turn towards being self-aware and how it can portray this element within a video game in ways greater than one.

Developer: Over The Moon Games 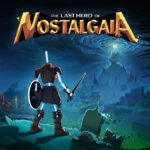 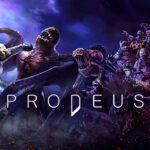 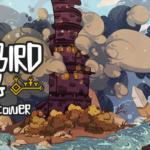