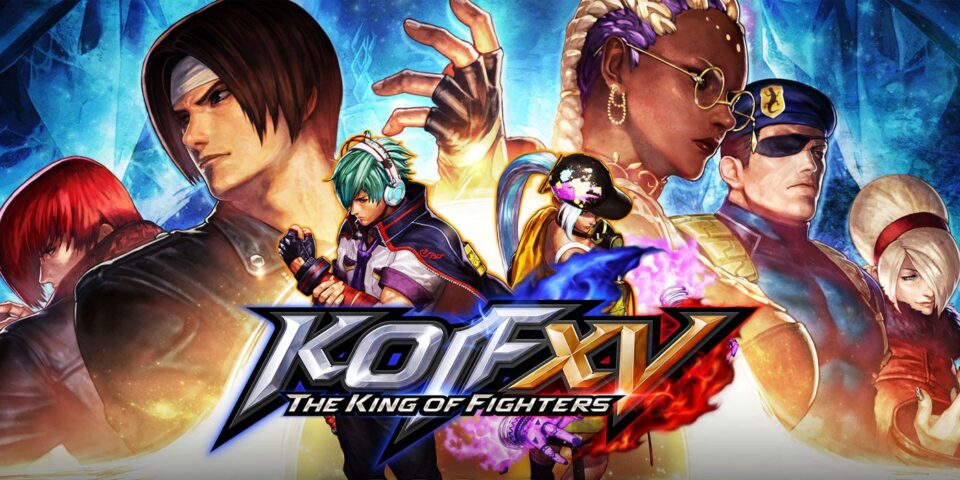 The King of Fighters franchise started off as a way for developers SNK to bring characters from all their different arcade classics, like Fatal Fury, Ikari Warriors and Art of Fighting, into one game and have them fight it out in the King of Fighters Tournament that had previously been used as the setting for the events of the very first Fatal Fury game. First released all the way back in 1994 for arcades and initially an annual game, similar to modern sports titles like FIFA, a new King of Fighters game would come out in the arcades every year until 2003. As video game development got more ambitious and time consuming, SNK decided to stop the yearly KOF releases, as well as the year of release in the title. Fast forward to February 2022 and The King of Fighters is back with The King of Fighters XV. 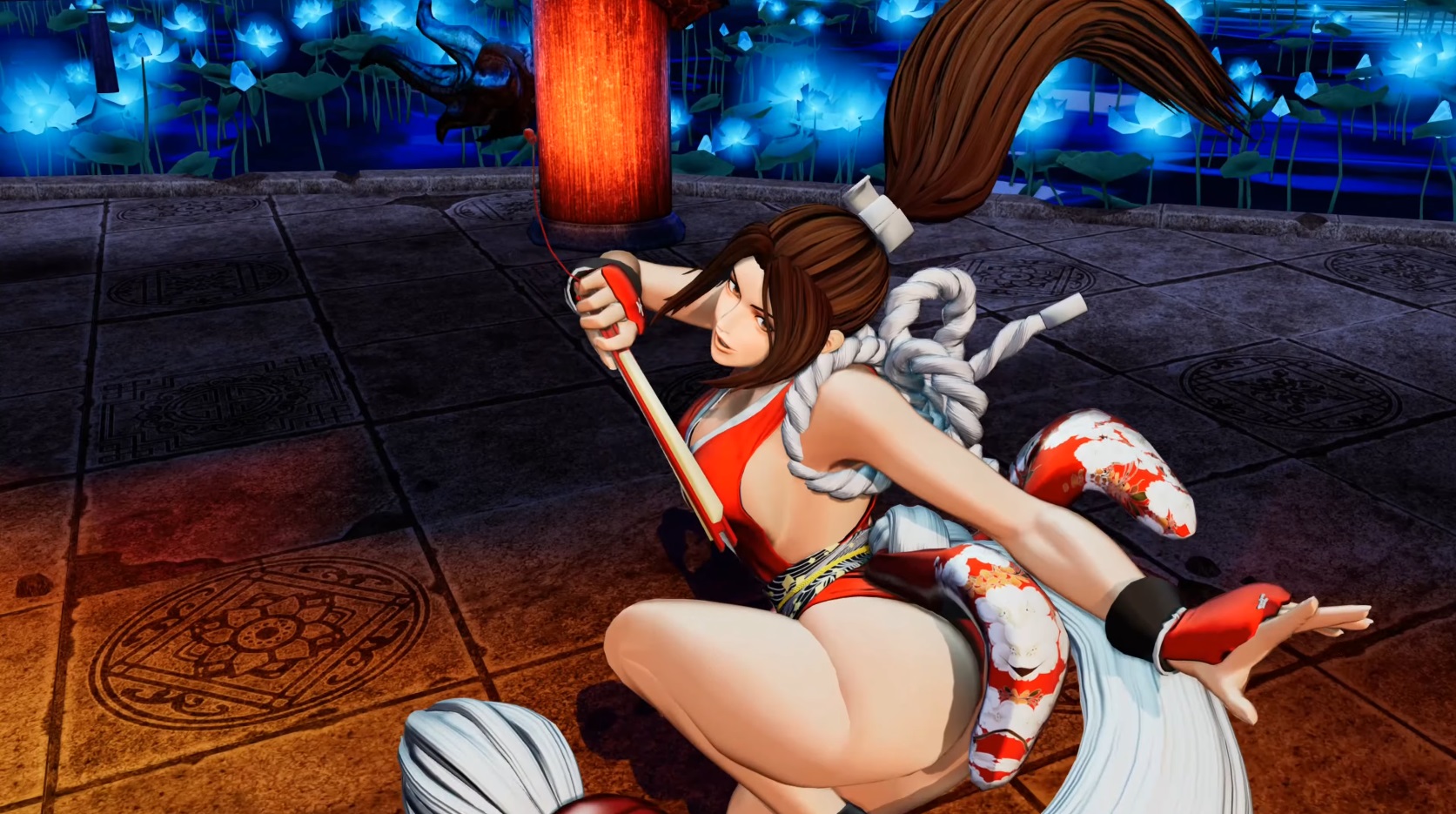 The King of Fighters XV aims to ‘Shatter all Expectations’ with its newest instalment, and after the lacklustre reception of KOFIV from the community, developers SNK seem to have gone all out to make sure this is one of the best modern-KOF games yet. The most obvious upgrade from KOFXIV is the graphics. XV is a massive improvement over its predecessor in terms of lighting, stages, UI and character models; the only thing that lets it down is some of the particle effects on certain special moves with characters like Kyo or Terry. I don’t know if it was an art style choice or what, but some fire-based moves don’t look as good as others. Despite that one criticism, the game looks sharp and crisp, for the most part. Character models especially look fantastic in the match intros and outros, and I like how your super metre for Maximum Mode is a mix of blue, black and yellow, making it stand out and look like a warning sign to your opponent that you’ve got some big damage stored up, waiting to be spent.

As someone new to The King of Fighters mainline games (I’ve played KOF ALL STAR on mobile, that’s it), learning how to play the game was an interesting experience. The tutorial isn’t any more helpful than just telling you which button does what attack. There’s virtually no context or help given to new players on what to do in a match, which is disappointing when compared to recent games like Guilty Gear -Strive-. You can watch replays of other players to get an idea of how to play “real KOF”, and the Mission Mode does try to pull your focus on using your Super Meter for extending your combos, but some extra advanced tutorials to push that concept further and then expand that on how to build up your Super Meter would’ve been really useful. 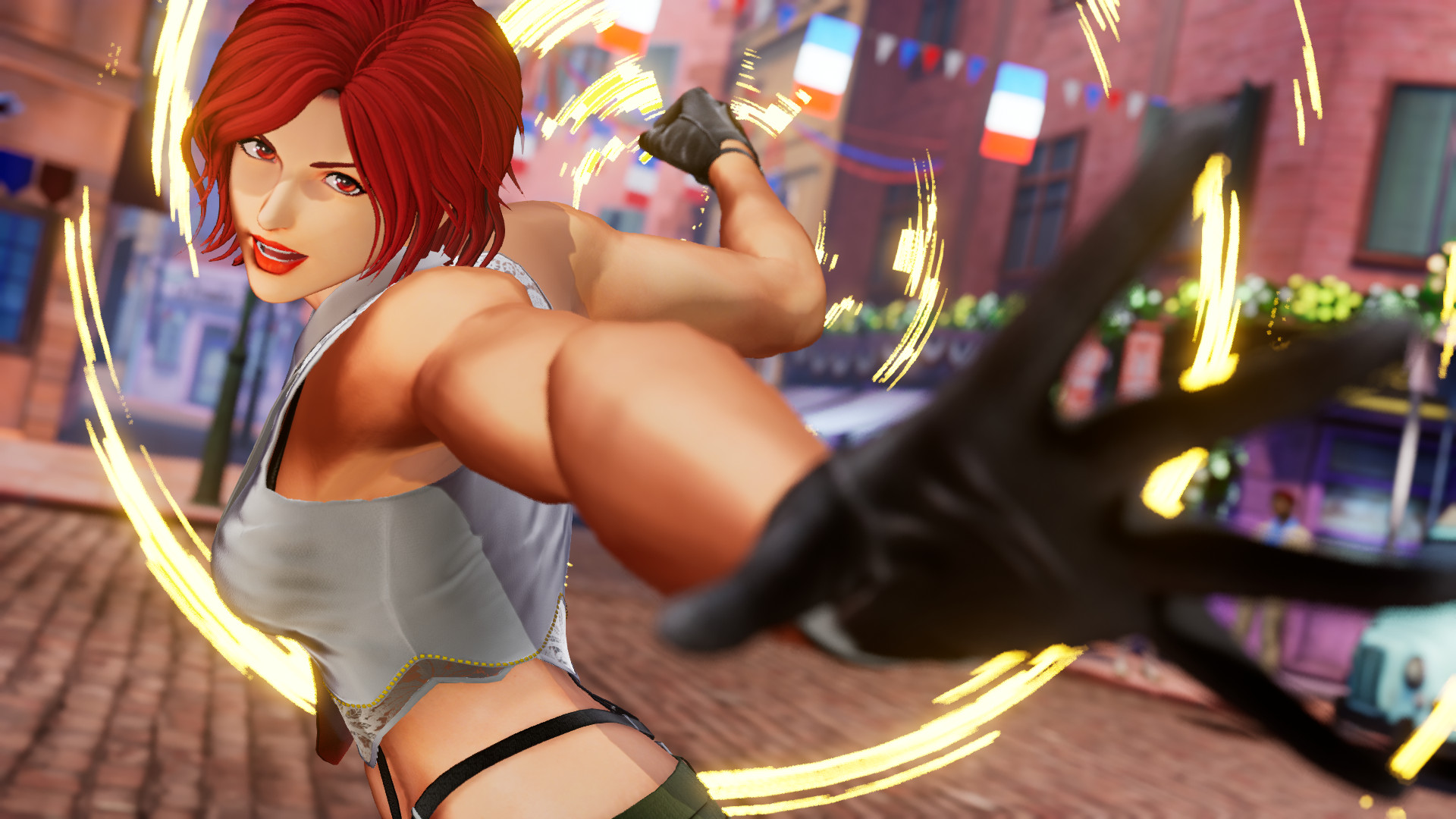 As a ‘team-based fighting game, KOFXV sees you pick a team of three fighters to battle opponents; however, it isn’t ‘tag-team’ rules, so instead each fighter takes their turn until KO’ed, and your next character comes into a new round start. The winner of a round recovers a little bit of health, a bonus that decreases the longer it takes you to beat your opponent, and your Super Meter carries over into the next round or character as well.

This is how character selection and what role they can play in your team can become deep as you usually want the first character to either be able to do a lot of damage without Meter, or you can quickly build up Meter for other characters. Normally, you would save your best character for last because that’s when (in theory) you’d have access to the maximum five bars of Super Meter for the most damage potential.

During a fight you want to use your long-range moves, projectiles and various jump-in attacks from short hops and regular jumps to wear down your opponent, then when they make a mistake and let you get close to them, that’s when you get the opportunity to put those Mission Mode combo trials to good use. The King of Fighters has a very distinct playstyle that sets it apart from other fighters, and I think how you build combos plays an important role in that.

A lot of modern fighting games now have you build combos with Move A into Move B cancel into special. KOF sort of changes the rules when it comes to what moves can be cancelled into specials and when they can be cancelled mainly by using “proximity normals”, which basically means your Heavy Punch and Kick buttons do a different attack depending how close to the opponent you are. This allows you then to start chaining moves together with your Command Normals and Special Moves. As a result, because the game has a lot of characters with tools to keep you at distance, use of the game’s various different jump mechanics is essential in closing down the distance to your opponent. 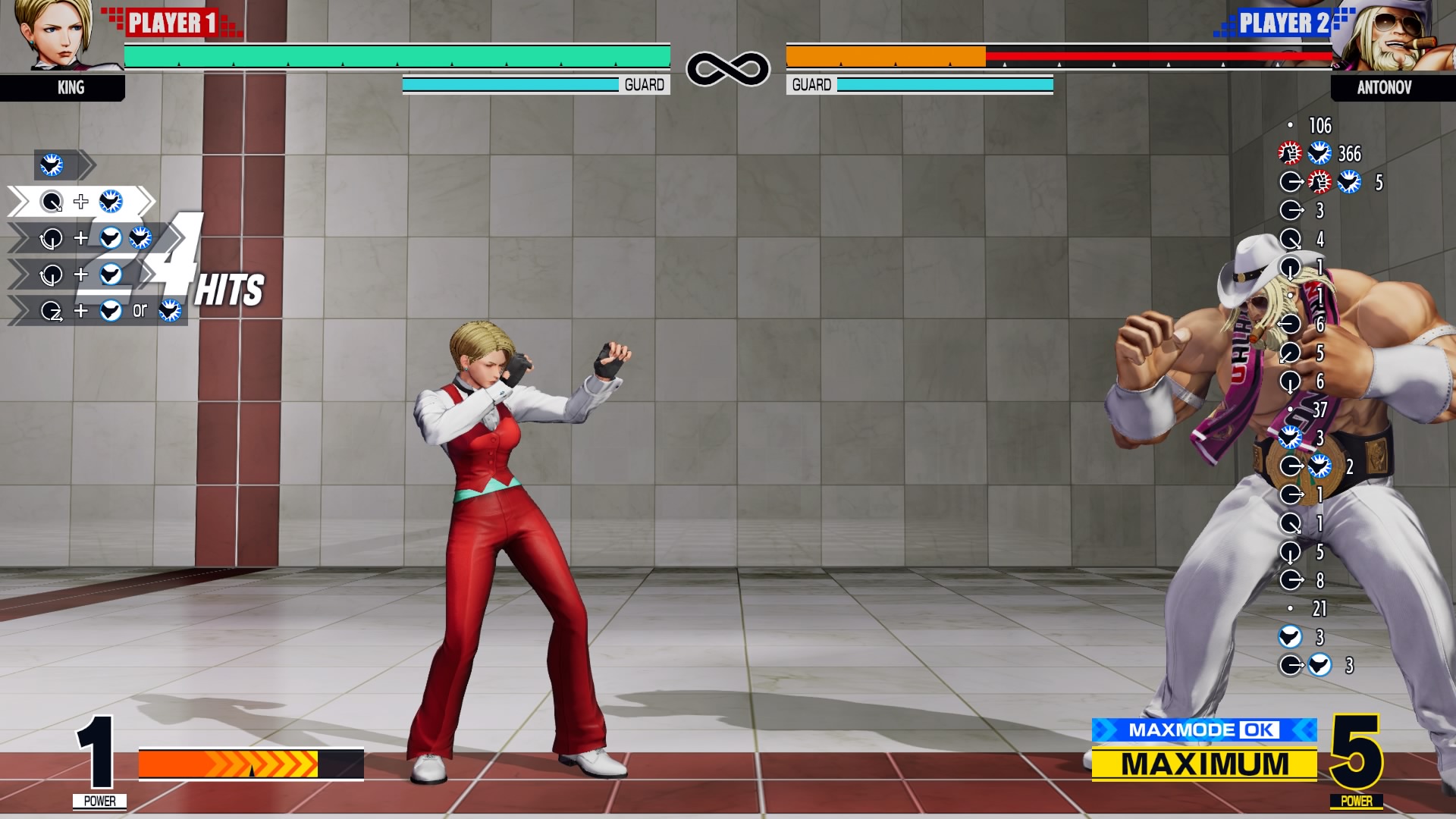 Boasting a roster of 39 characters from launch (with more already confirmed for future DLC), I’m confident in saying there is at least one character in the game suitable for everyone, no matter what your experience level is with The King of Fighters or fighting games in general. The large roster allows for a multitude of characters with unique gameplay styles, execution complexity and ease of use, and because of the way the combo system works for pretty much every character, once you’ve learned your first character and feel comfortable playing as them, learning a second and third one to complete your team becomes a lot easier.

The game’s Story Mode does a decent job at adding some context as to why the team members are fighting together and in the KOF tournament with lovely picture and text endings, which are actually quite long compared to what you might expect from a fighting game. A lot of the cast are familiar faces to the series, with a few newcomers like Dolores, who’s basically an earthbender, and Isla, who’d fit right in with the other Stand users in JoJo’s Bizarre Adventure. 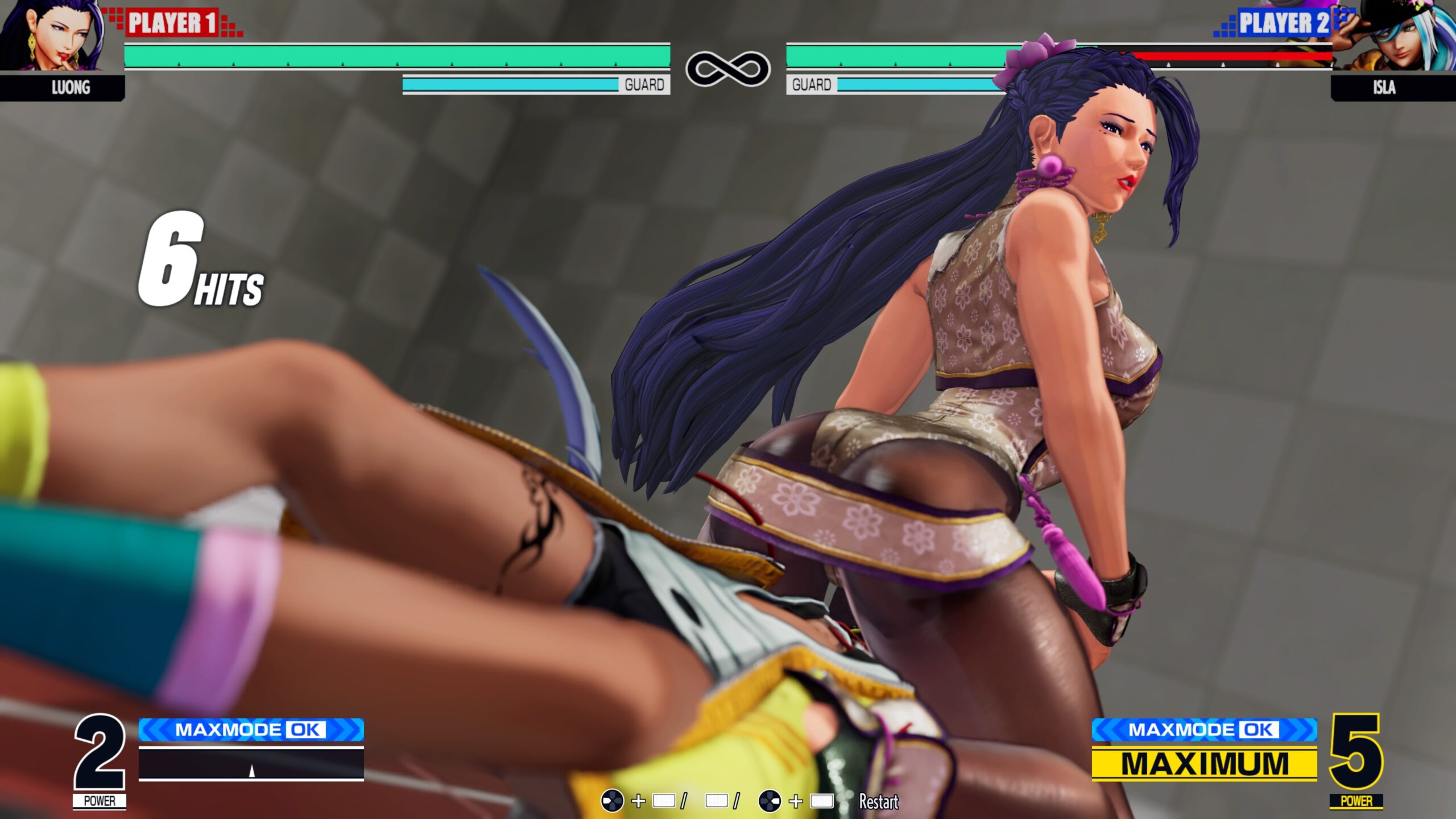 For me, I settled on using Robert Garcia, who I’m dubbing the “ultimate shoto”  because he has it all: fireballs, tatsu, Dragon Punch, plus a Dive Kick and Chun Li’s Lightning Kicks to style out your combos. Then we have Vanessa, the game’s boxer who has a motion blur effect on her Light attacks, really emphasising the speed of her jabs. Then finally Kukri, a hooded man with an attitude problem who uses sand-based attacks, including a drill-type Super Special Move that looks like Bison’s Psycho Crusher.

After some practice it was only right to try out online and KOFXV’s online play, and its infrastructure is good but suffers from the same issues as a lot of other modern day fighting games. The Rollback netcode means matches are smooth, but there are issues with connecting to rooms, random disconnects after matches, or issues connecting before a match. Thankfully, SNK are looking to resolve these issues with an upcoming patch. The inclusion of a 6-player, 3 vs 3 mode for casual online play is also a brilliant way for new players to dip their toes into the online environment.

KOFXV is a great return to form for the series and a refreshing alternative to other fighting games out there right now. If you’ve never tried the series but always wanted to, KOFXV isn’t a bad place to start, but you may want to use some learning resources outside of the game’s Tutorial to help you along.

Once you’ve found your feet and got a team you’re comfortable with, the game really opens up as you start experimenting with line-ups, creating and practicing combos in Training Mode and unleashing them on your opponents online. The unique approach to how combos work and the hit-and-run style of gameplay make fights thrilling, and you really feel the payoff when you are able to get inside your opponent and pull off a combo with your Level 3 Super. Whilst there will be some growing pains along your journey into KOFXV, if you stick with it for a bit, you’ll soon be rewarded with a frantic and over-the-top fighting game that doesn’t need to take itself too seriously and is all the better for it. 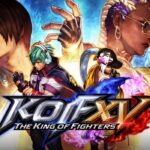 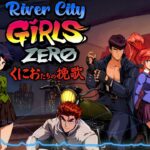