I haven’t played a Metroidvania in quite some time, possibly not since I completed Blasphemous, developed by The Game Kitchen. After noticing high amounts of praise for Ender Lilies: Quietus of the Knights, a haunting but beautiful 2D fantasy Metroidvania, I decided to play it for myself on the Xbox Series S. It’s worth noting that Ender Lilies seems to take inspiration from Hollow Knight, one of my favourite Metroidvania games of 2017, and I believe it will help scratch the itch for anyone waiting for its sequel, Hollow Knight: Silksong. 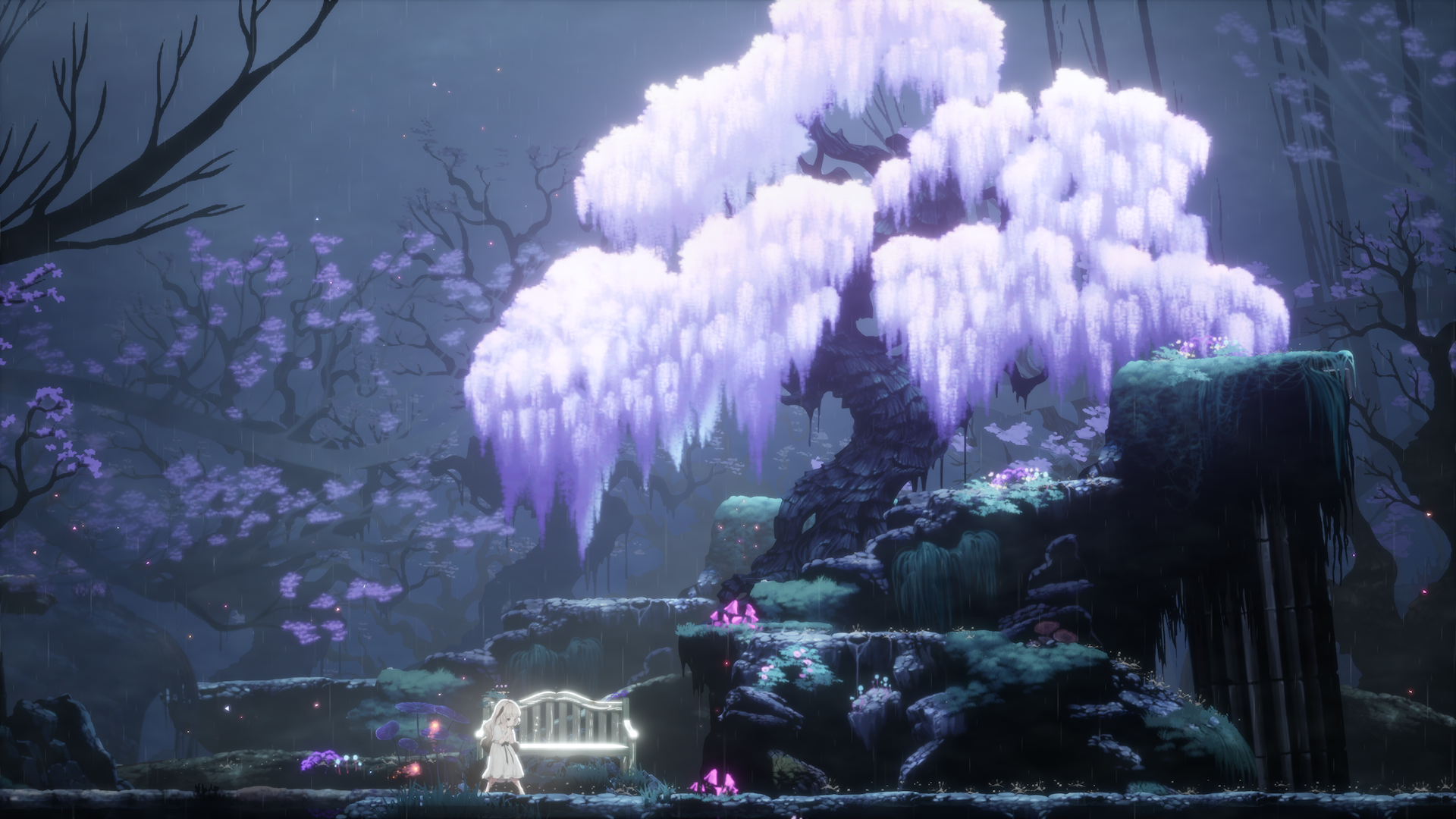 You play as Lily, a lost, young priestess who escapes the safety of an abandoned church to uncover the origins of the rain that has left the world in an apocalyptic state, having turned citizens into Blighted, undead creatures who roam the land in a crazed state. By herself, Lily is defenceless but can use the power of Spirits to combat those who seek to destroy her, including your average enemies and a wide variety of bosses. Spirits can be claimed from defeated bosses to gain new combat abilities that may determine the outcome of a particular battle. For instance, one Spirit may use a giant hammer to cause high damage at the cost of being slow and leaving the player open for attacks, whereas another Spirit may shoot projectiles towards a short distance to keep enemies at bay. Players can assign Spirits into slots within two sets that can be switched mid-battle but can only be assigned first through a Respite point, portrayed as the game’s checkpoint system. Combat sections themselves are not too tough unless approached by multiple enemies at once. However, defeating enemies feels satisfying, and hitboxes are responsive and balanced fairly, meaning players shouldn’t feel too frustrated battling the various enemies located around the world. Ender Lilies utilises a defensive dodge mechanic assigned to a single button on the controller that feels easy to pull off and contains a fair amount of invincibility frames, especially useful during the tougher boss battles. 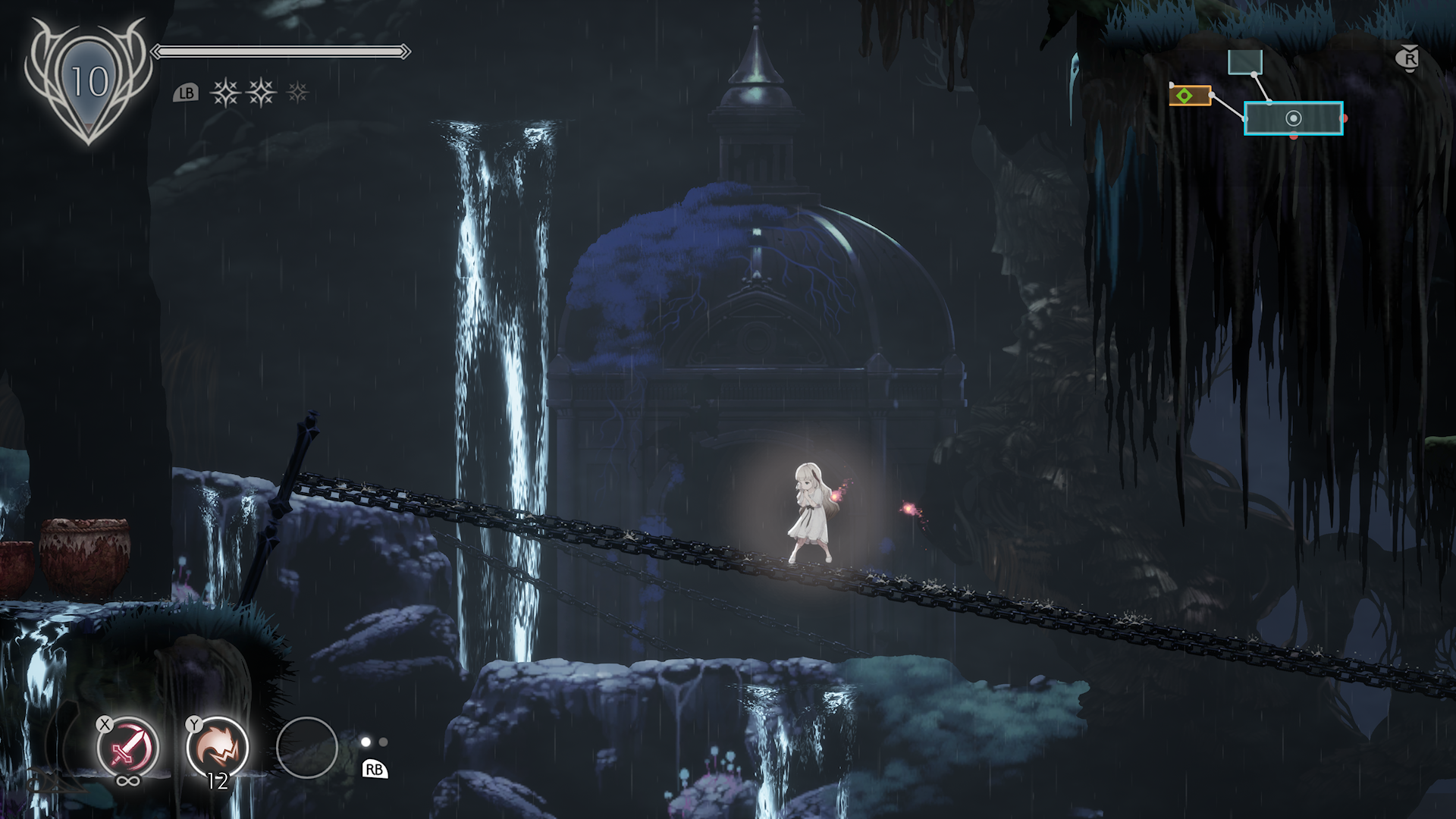 Checkpoints are obtained through Respites, acting like the bonfires in Dark Souls or the benches that are also present in Hollow Knight. Players can save the game, assign Spirits to different slots, and even assign items known as Relics that are hidden throughout the world and increase the player’s passive abilities, such as reducing damage and increasing your maximum health. Relics are scattered around the world to encourage exploration, and players may need to backtrack to uncover hidden secrets that were unreachable on the first visit. Some Relics can be found through previously inaccessible areas, and others are behind hidden walls, meaning the player must look through every nook and cranny to really upgrade their character. Alas, the map system for Ender Lilies is colour schemed, similar to Resident Evil 2 Remake by Capcom, where any floors without items are shaded orange, and any floors that are not yet fully explored are shaded blue. I absolutely love this design because it means I don’t have to waste any time trying to find items on a level that is already fully explored. Relics are also presented as objects with descriptions that help explain the meaning of the item, further expanding on the world’s lore. 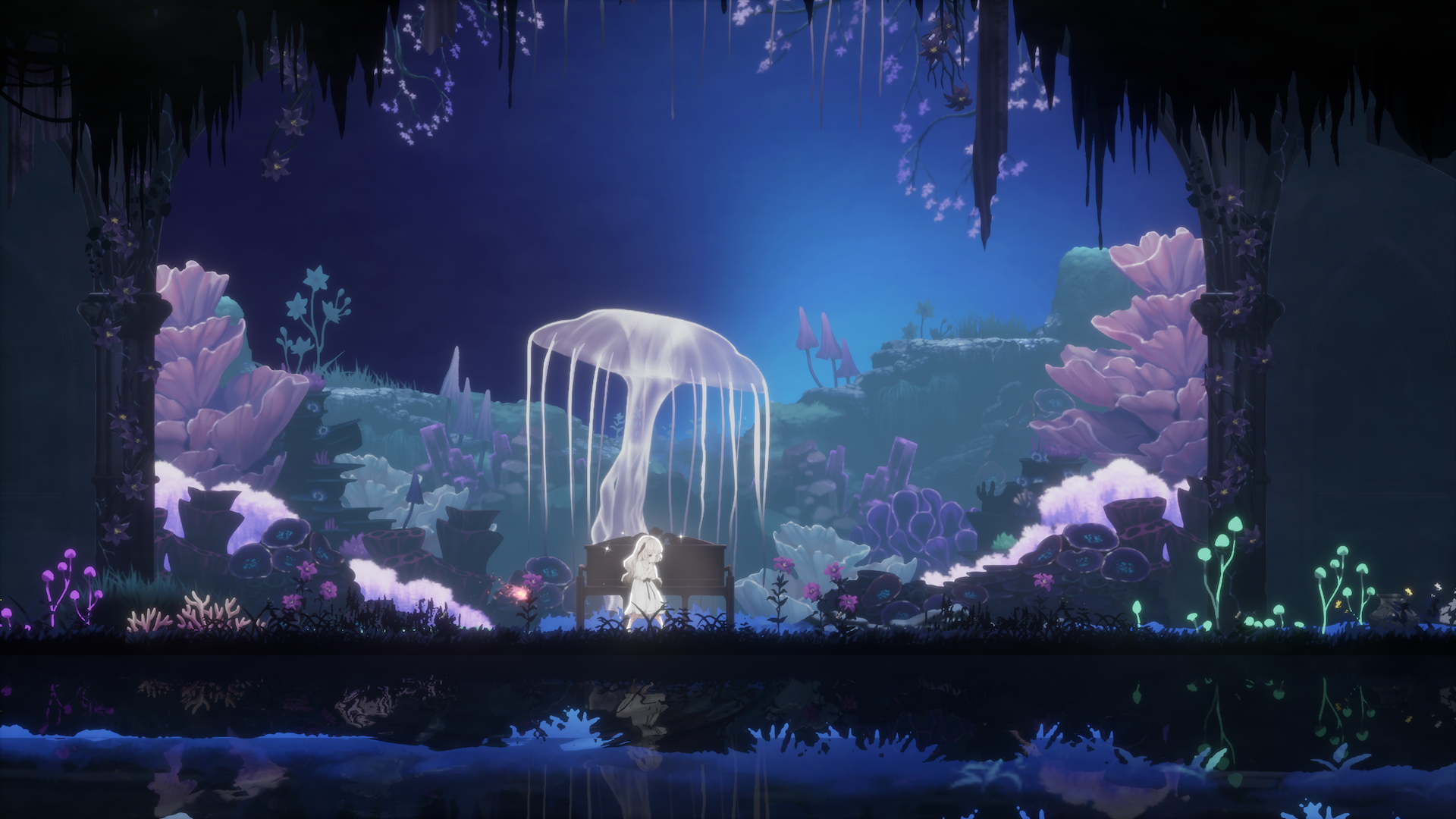 Developers Adglobe and Live Wire have enriched the world with an immense amount of lore, which can be learned through cutscenes, notes and through dialogue provided by the Umbral Knight, who aids the player since the beginning. These notes, or Findings, as the game calls them, can contain different pieces of information depending on where they are found. For instance, notes found early on explain the Blighted, giving the player more of an idea as to how the world became dark and nightmarish. However, whilst it appears that the characters of Ender Lilies are rather literate, it also appears that many of them are mute as the game severely lacks any aspect of voice acting. To me, this hinders deeper character development because, without a voice, the characters are limited in how their personalities are portrayed.

There is no lack of enemy variety throughout the game whatsoever. You face off against your typical enemy grunts like archers, sword-wielding zombie soldiers and what I can only describe as slug people who jump at you like grasshoppers. Further into the game, you meet much more terrifying abominations, which you have to really experience for yourself. Each enemy has its own animations and combat styles, which really keep players on their toes when facing a new threat. 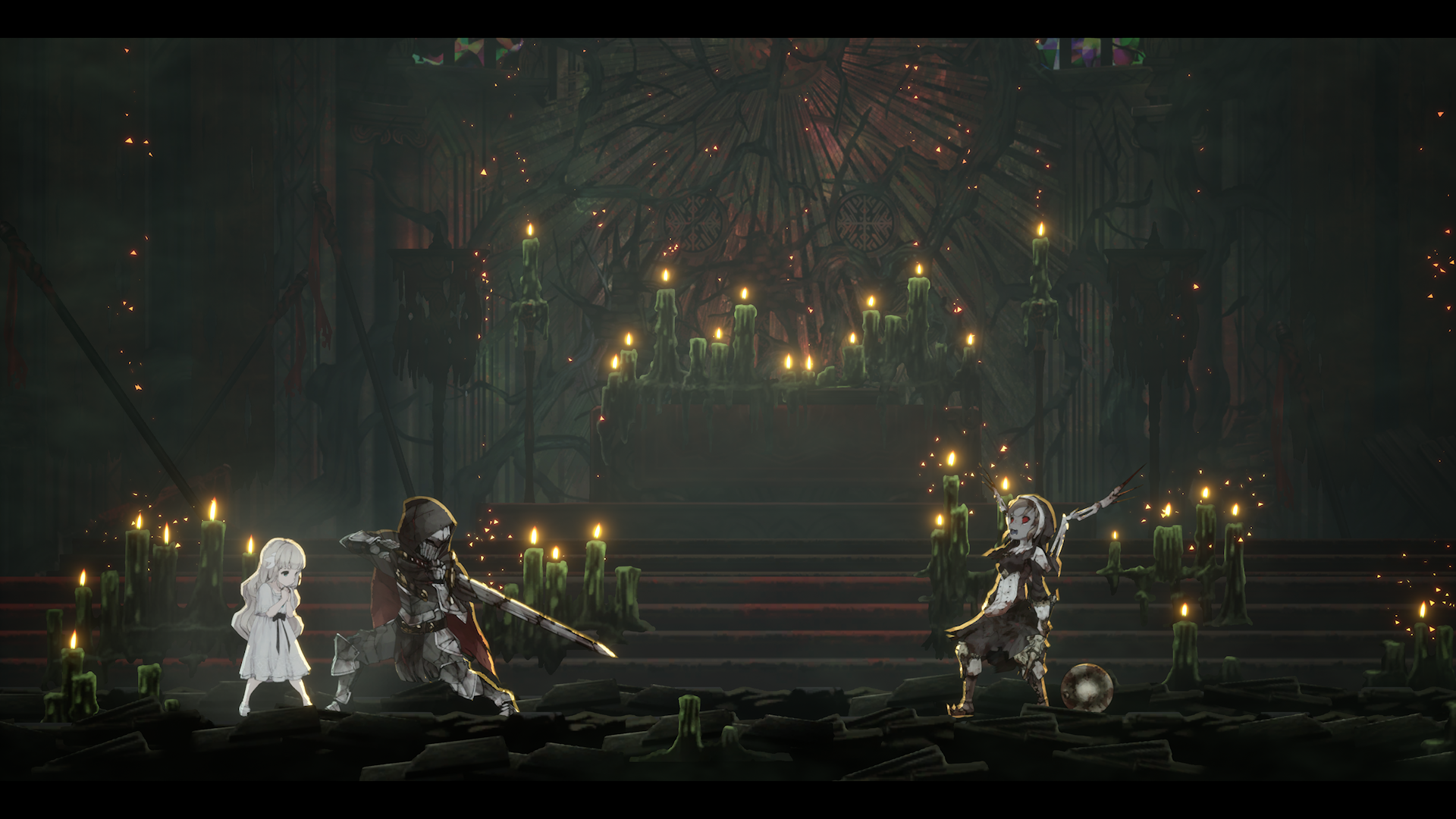 The soundtrack for Ender Lilies is mysterious and blends in well with the atmosphere for each zone. Most of the time, levels will contain subtle piano notes, sometimes using a female vocalist for a more sombre tone. During underwater sections, the music becomes sunken and almost drowned out as if the character had a set of Airpods fixed onto her ears when going for a swim. In boss battles, the music may be calm at first before erupting into a cinematic orchestra when halfway through a boss’s health bar, helping to hype up the thrill of the battle before striking the final, satisfying blow. 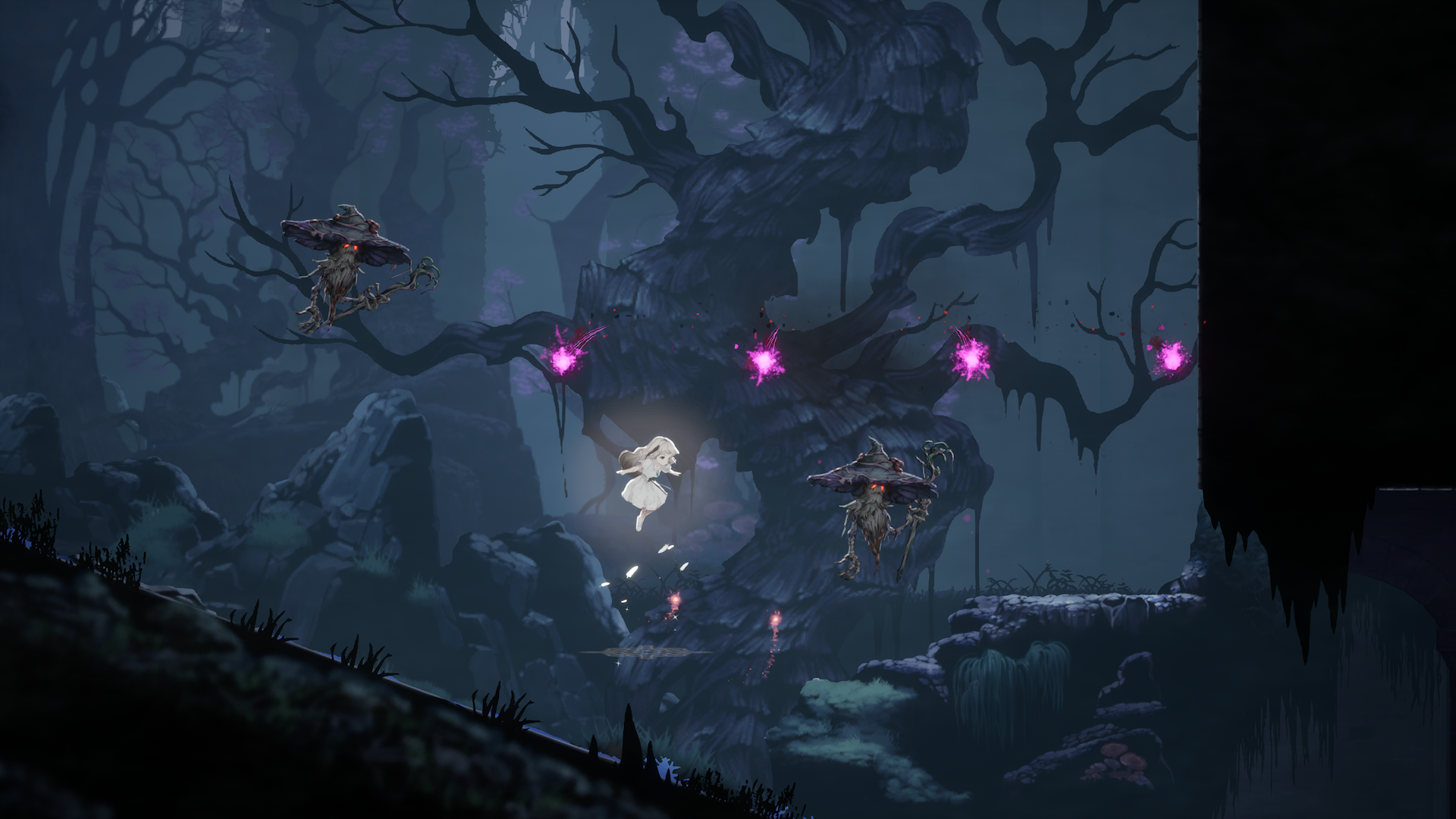 Overall, Ender Lilies: Quietus of the Knights deserved more marketing than it got. The game was first released in early access on PC in January 2021 but later made its way to consoles in July of the same year. I didn’t even realise there was a trailer for the game, so if it was advertised more, I think more people would see what a beautiful and enchanting game this truly is. Ender Lilies is a magnificent addition to the Metroidvania genre, adding a unique story that will definitely touch the heart and soul of many who play the game. 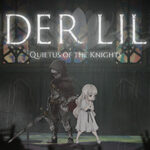 Gaming Respawn’s copy of Ender Lilies: Quietus of the Knights was provided by the publisher. 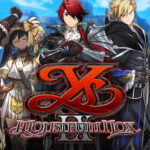