The Big Easy. Home to many people from all walks of life, all looking to have a good time in the sprawling streets. Well, that was until the city fell into total disrepair and anarchy due to the undead taking over. The Walking Dead: Saints & Sinners is a VR game like no other. You get to live out the dark, gritty, and brutal world of The Walking Dead. Every decision is based upon your actions, and their outcomes will shape your story. If you decide to help others, will that get you what you need to survive? If so, at what price? Likewise, if you take what you want without any measure of sympathy, will this have an impact on the people you come across? Will you be a Saint or a Sinner? The choice is yours. 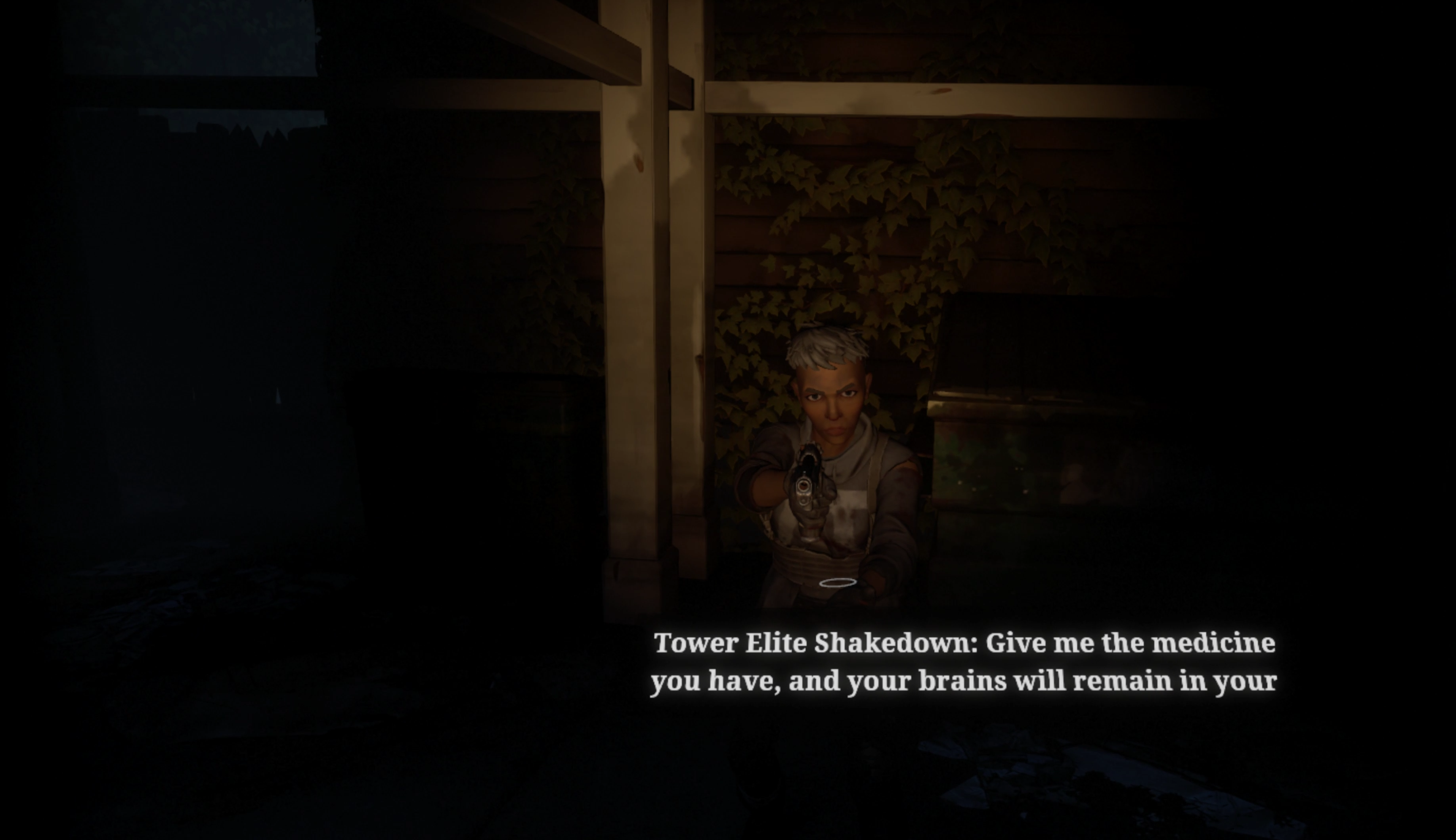 Released for the PC on Steam and the Oculus storefronts on the 23rd January, The Walking Dead: Saints & Sinners is retailing for about £30.99 for the standard edition and about £38.18 for the Tourist edition, but what is Saints & Sinners about? Well, in a nutshell it’s about you. You play as an unnamed survivor known only as the Tourist. Your mission is to find the elusive bunker known as the “Reserve”. Inside is every apocalypse survivor’s dream: meds, supplies, food, weapons the lot. However, the only problem is that you’re not the only one looking for it. In the flooded streets of New Orleans, there are two factions fighting over territory and resources. They are the Tower, a group whose sole dedication is to bring order back to New Orleans, mainly “their” order, and then you have the Reclaimed, a fanatical group who wants to abandon the old ways and embrace freedom. Each have their own agendas. 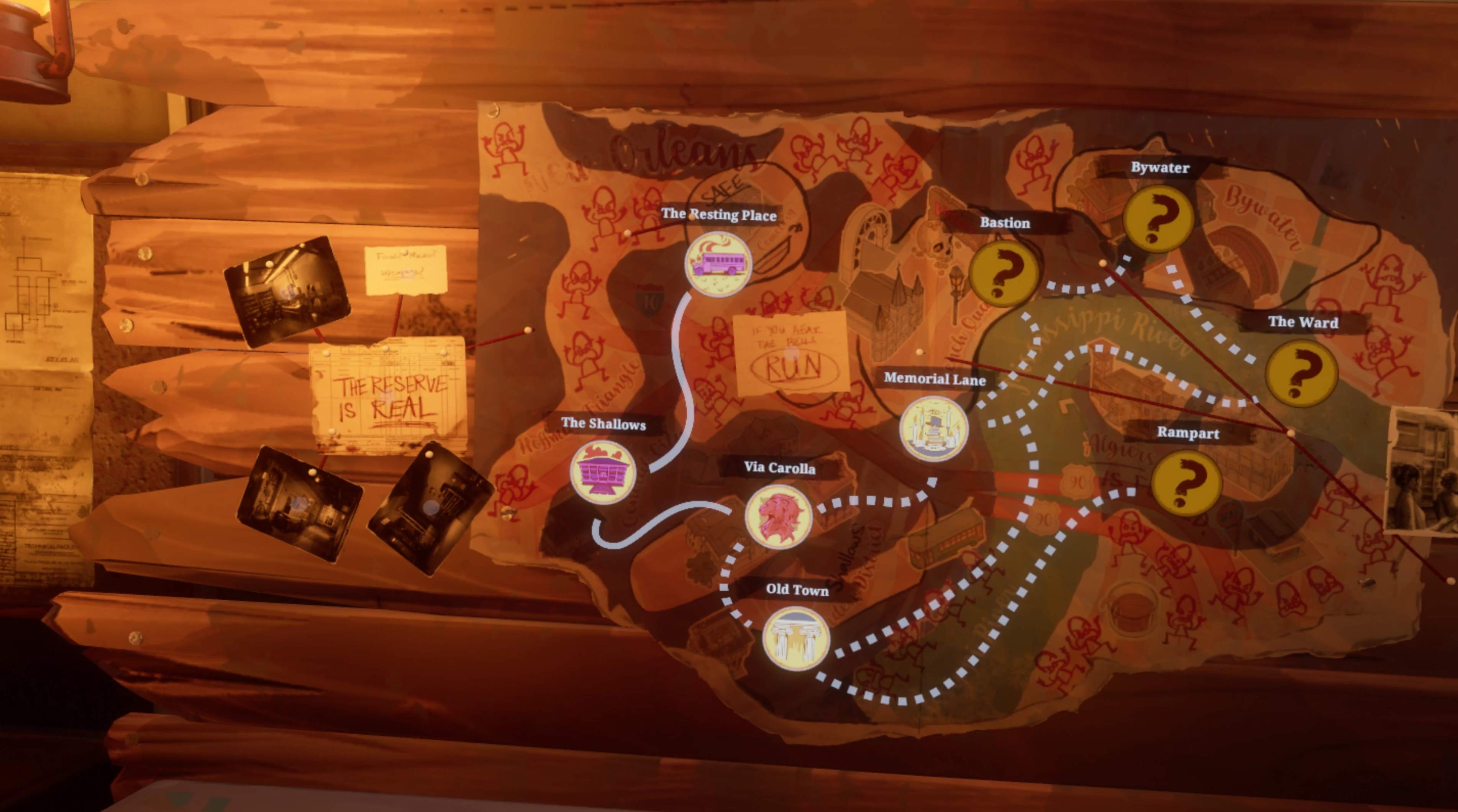 Usually at this point, I’d dive into the mechanics of the game I’m reviewing, giving out the pros and cons of what it entails and why some things work over others, etc., etc. Not with this game, however. Saints & Sinners has nailed it from the get-go. Every weapon feels weighty, balanced and responsive and can be handled with ease, making you feel like Daryl from the TV show in the way you dispatch the recently deceased and decaying populace. Weapons are literally everywhere, so being able to quickly pick one up in a panic as you’re set upon by the walkers is really handy. I can’t count how many times a discarded bottle of beer has saved my life. 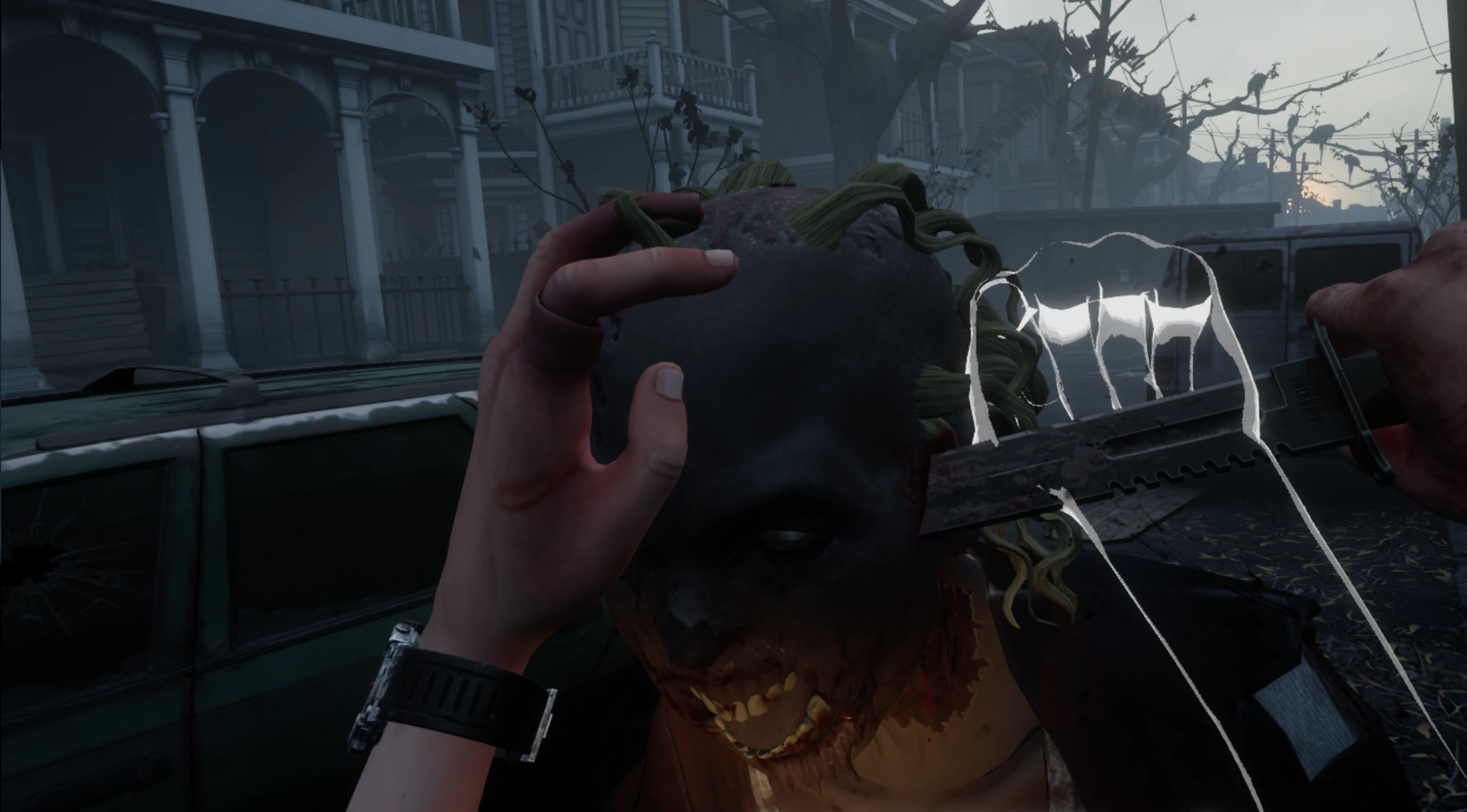 It’s these frantic encounters you have with the undead that satisfy the inner undead slayer within. Grabbing them by the head and using your tool of destruction to put them down permanently is cathartic every time. Plus, the added bonus of having to wrench your weapon free gives the realism and immersion factor a nice touch of embellishment. This is what makes the game so enjoyable.

Scavenging around the pockets of the city you get to explore is both tense-filled and frantic. Items, meds, guns, and crafting materials are all scattered throughout the dark corridors and streets, but you only have so much space in your backpack and time to gather what you need. Missions are available by means of your journal: gathering supplies to fix radios, gathering intel from rival factions to further your own search for the reserve; it’s all a game of priority. You’re constantly watching the clock as you get about half an hour-(ish) before the “Tower” faction rings the bells. What this does is it riles up the walkers, and basically, if you’re caught out in the open, you’ll have a really, REALLY hard time escaping the undead, assuming you make it back to your base of operations, which is the cemetery. Here you can deposit your scavenged goods for getting better gears, food and weapons. 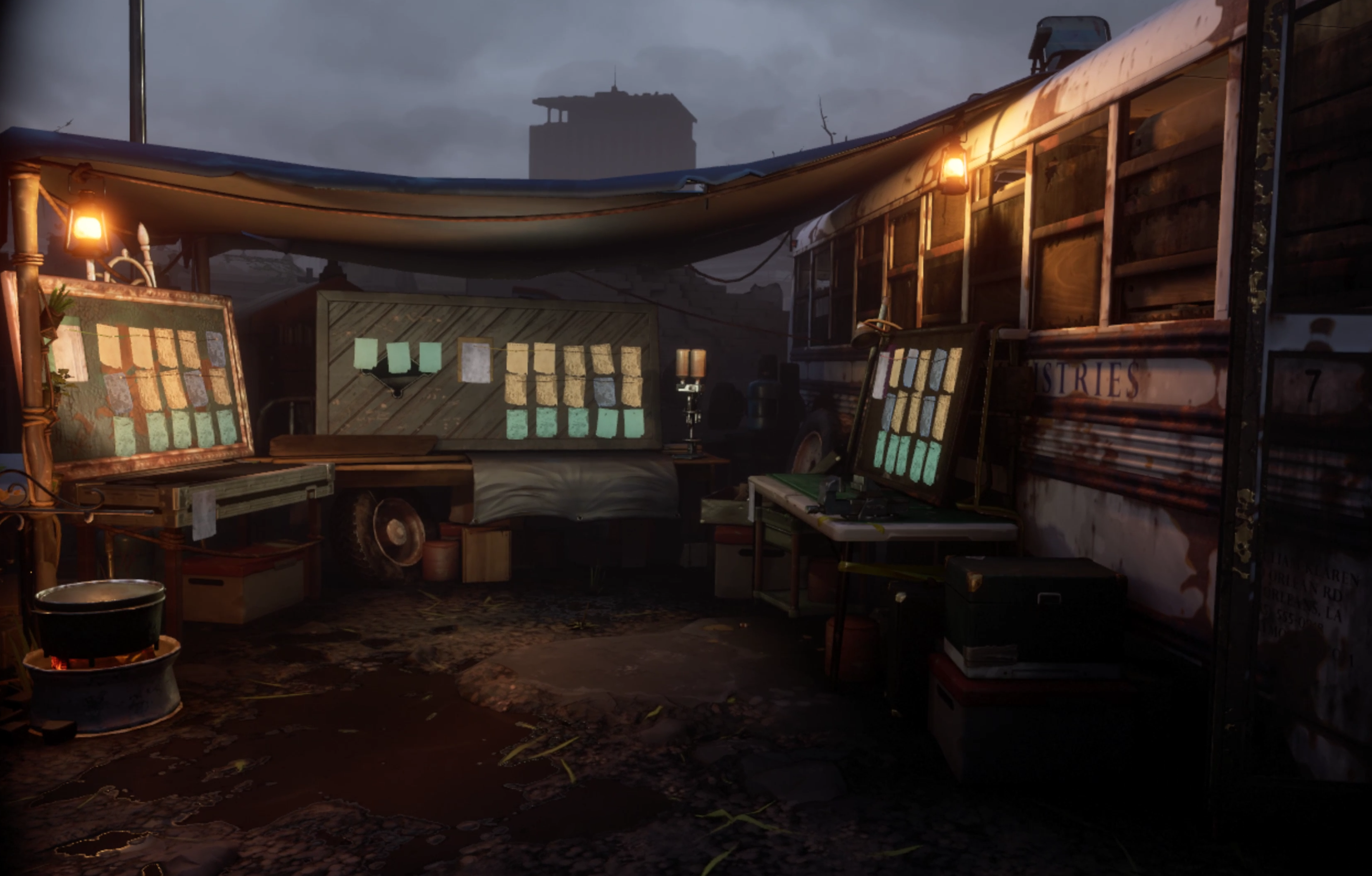 What you’re able to gather will determine what you ultimately make, thus, shaping your play style. Crafted gear is always better but costly to make. It has the benefits of lasting longer, so having your favourite go-to zombie-slaying weapon of choice is vital. Just be prepared to make more than one. Guns are also responsive and feel like they deliver death very quickly. But be prepared as when I played, I found guns were my LAST point of call. Yes, they can quickly deal with any walkers/humans that may want to see your brains all over the floor, but the problem is that they are loud and attract more walkers when you use them, so they’re a double-edged sword. In any case, however you decide to go about playing this game, you’ll have a blast, from the many, many scenarios you’ll find yourself in to the gear you’ll craft.

Every ounce of this game oozes attention to detail. Immersion is key with VR, and Saints & Sinners has nailed it on the head. A personal favourite touch is the option to turn on the speaking function. So, remember Alien: Isolation’s trick with noise being detected through your controller? Same thing applies here but from your VR headsets built in the mic. I truly recommend turning this on. It all helps with the immersion. So, depending on how creative you can be, you’ll see scenarios play out differently. An example of this is when I was scavenging a house on the very first mission. Walkers were amassing downstairs. I only had a badly damaged screwdriver and a bottle. The exit was beyond the walkers, so my only choice was to throw the bottle down the hall to see if the noise would lure them away. I wasn’t expecting anything at first to happen. But, it worked. I was able to slip by them and away to freedom. The prospect of fighting my way through a horde with only a screwdriver wasn’t something I was relishing. 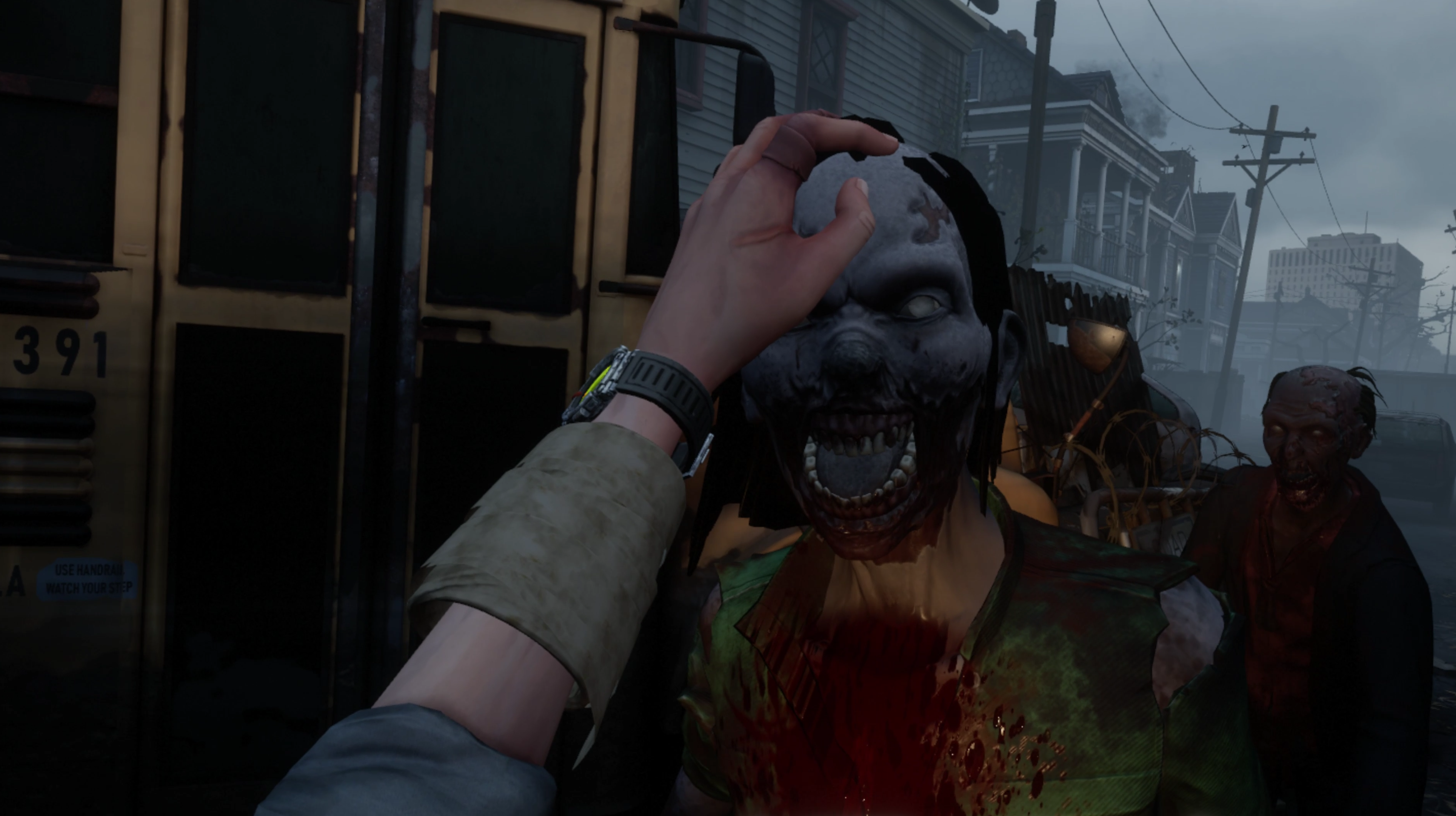 Another neat little feature is the ability to blend into the crowds by, you guessed it, chopping up a recently slain zombie. You can harvest the organs to rub over your clothes, essentially masking your presence. This is both exhilarating and nerve-wracking at the same time. You have a limited time to make use of this tactic, so use this when there is no other choice. But being able to walk among the dead from the fist-person perspective is a unique experience. This can be used to get the drop on your enemies if you’re cunning enough. Just don’t run whilst in this mode. It doesn’t end well. Trust me.

In closing, I would say definitely get this game. It has the thrills and spills of The Walking Dead universe all tied up in a neat package and is filled with thrills, chills and zombie-slaying goodness. Everything a VR gamer is looking for.

As you can tell, I really like The Walking Dead: Saints & Sinners. From the attention to detail down to the mechanics of the combat and scavenging, everything has been thought out. Nothing is wasted, and with the rich and detailed story running alongside the gameplay hand-in-hand, it all just clicks. The ever-increasing threat from both the living and the dead intertwine into a rich, expansive experience that certainly leaves an impression. There are a few niggles, mainly with the crouch function being mapped to a button and not a physical crouch. But other than that, it just works. I highly recommend it. 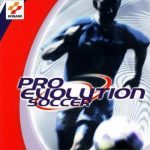 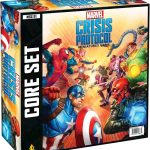