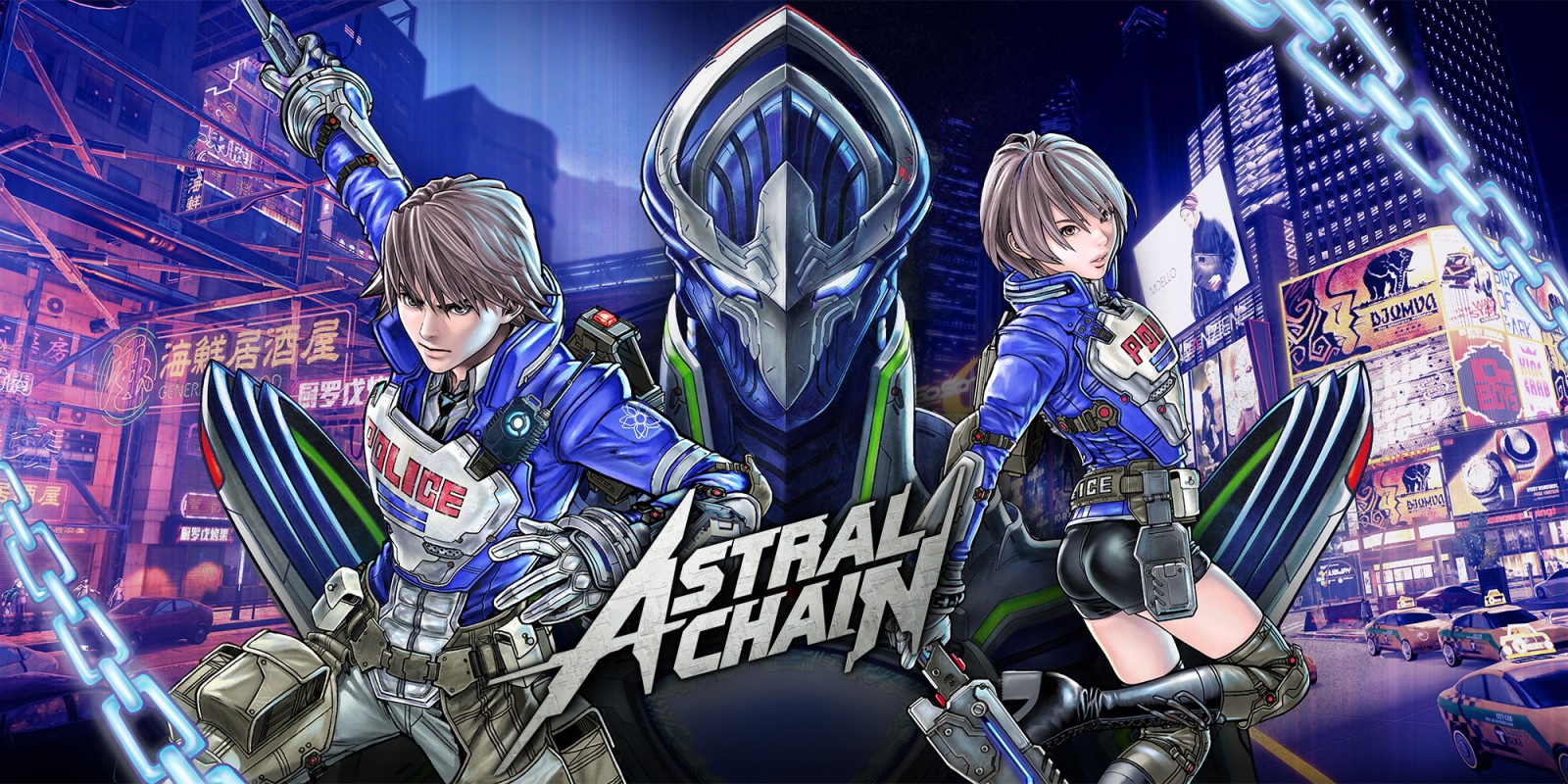 Spectacle over substance is an interesting dichotomy. On one hand, a game without substance can feel shallow and uninteresting. On the other hand, a game without spectacle can be dry and boring. PlatinumGames is a company that truly embodies spectacle over substance. Most of their games have been known to look beautiful and feature insanely stylish combat, but they also have a tendency to run dry pretty quickly thanks to a lack of actual substance. Their latest title, Astral Chain, might be the first game to depart from that trend.

Astral Chain is a hack-and-slash RPG game set in a futuristic floating city. The player takes control of a police officer working in a special division of law enforcement that is set to deal with Chimeras. What is a Chimera? Well, basically there are these monsters that seem to leak into the real world from some sort of astral plane. The main issue is that they cause a lot of trouble for normal people, and most normal people can’t actually see them. As a member of a special division who uses captured Chimeras as weapons, you must protect the world from these dangerous monsters to keep the floating Ark in peace. 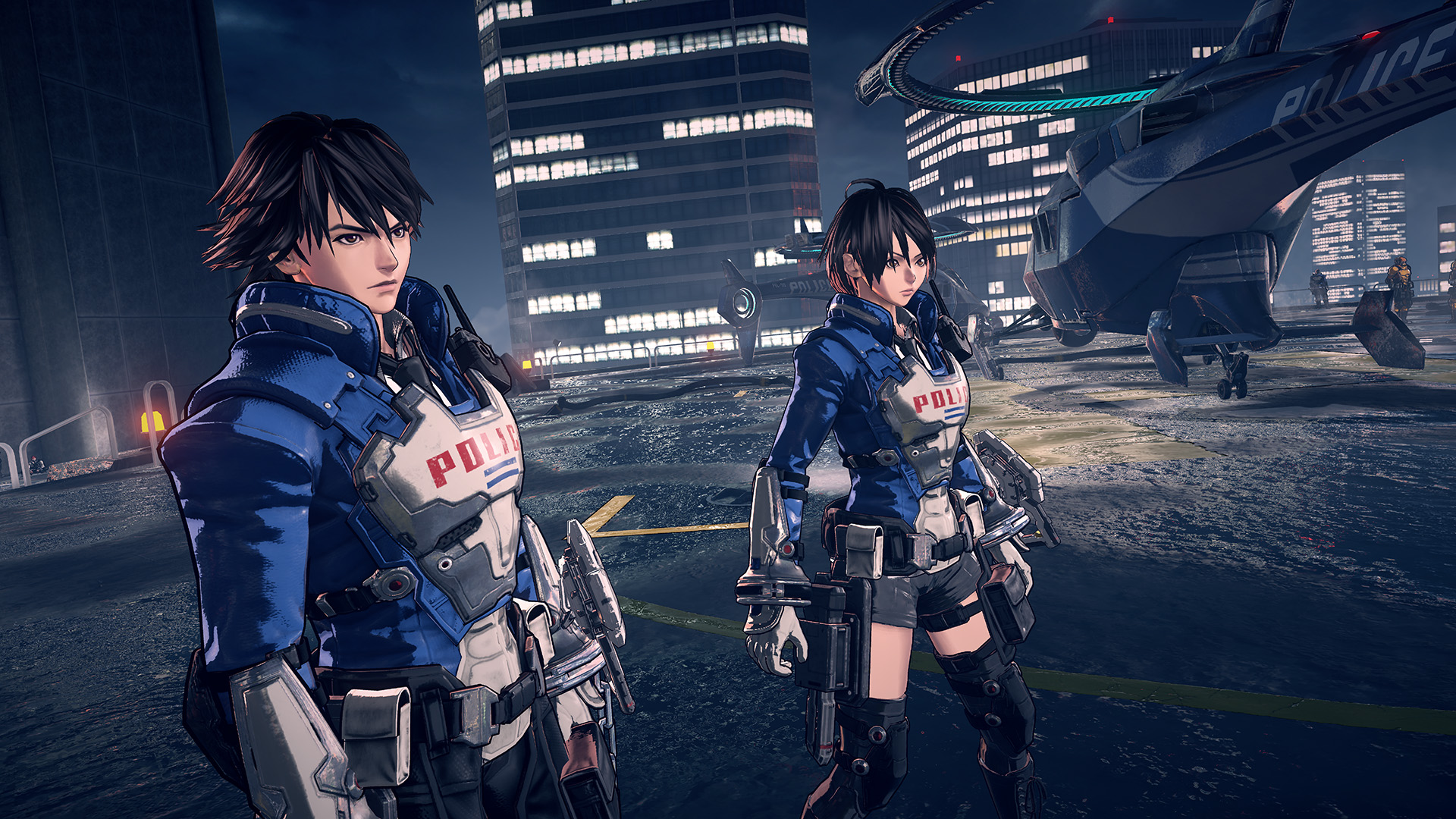 The combat in Astral Chain is about as hack-and-slack as it gets. You basically only have one attack button and have to spam that to perform combos. The main nuance to the combat is actually based around your captured Chimera. Throughout the course of the game, you can get your hands on several different Chimeras, each with their own attack styles and weapon types. During combat the Chimera will attack by itself for the most part, but it’s up to you to activate its special abilities and use it to perform combos. While attacking with your own weapon, you will occasionally flash, which indicates a brief opportunity to perform a link attack with you and your Chimera working together.

This link attack system is the main way that combat evolves as you get further and further into the game. Your different level-ups often add new circumstances under which your character flashes, making the link attacks more common. You also gain a variety of weapons as you go through the game, which affects how the link-attacks are performed and is a nice touch. Well, technically, it’s the same weapon that can transform because FUTURE! 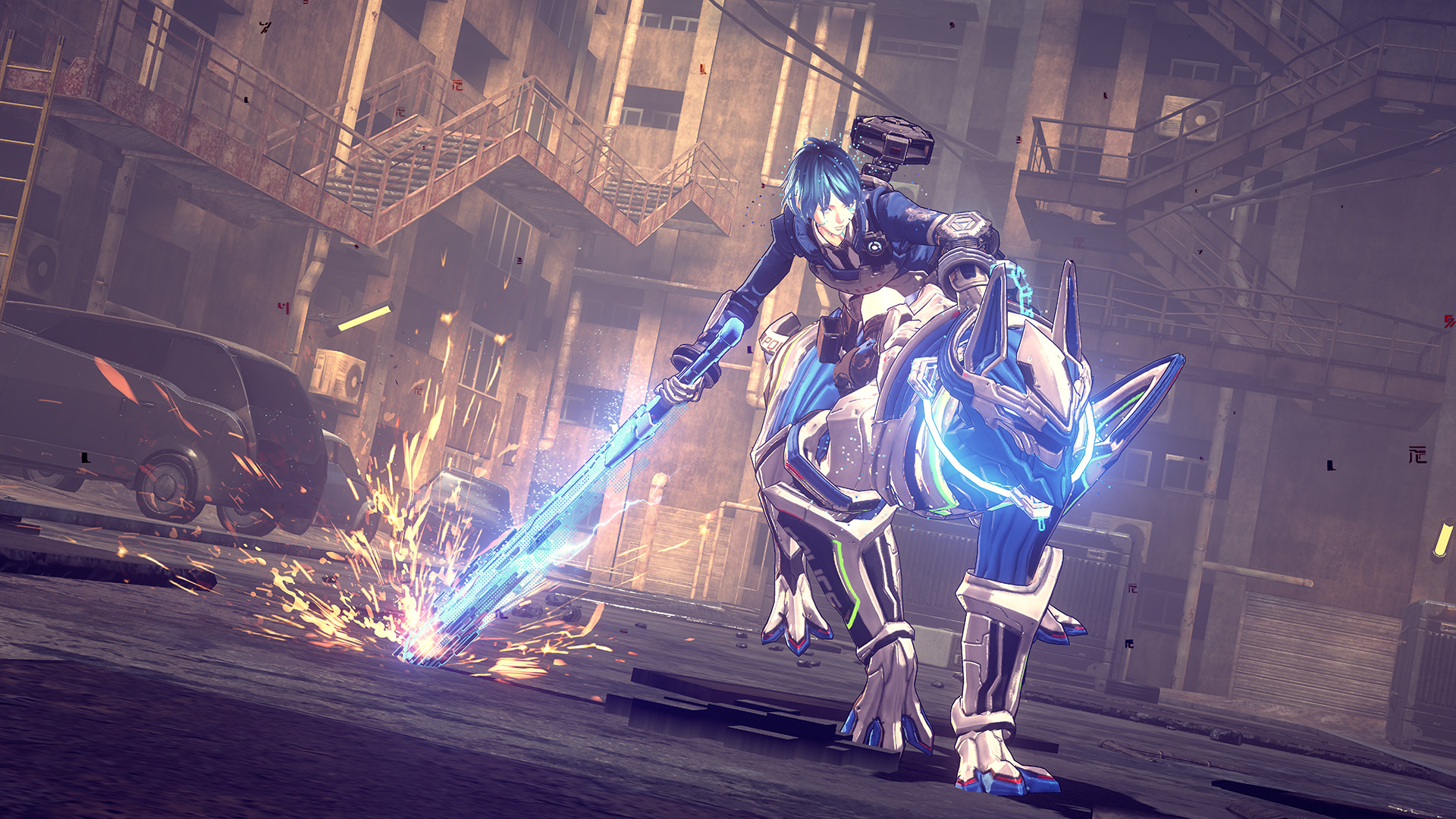 As well as commanding him to use his specials or bouncing combo attacks off him, you can also actively move your Chimera around, which has interesting effects. Because you’re tethered to your Chimera, you can use the chain that ties you together to affect combat in a variety of ways. You can use it to tie enemies up, immobilizing them, and you can use it to spring back a charging enemy, which stuns them. You can even use it to slingshot yourself into an enemy and do a fair amount of damage. The best part is that you can actually chain a fair number of these attacks together to get some truly stunning combos going.

This is where the departure from tradition comes in. Astral Chain certainly looks pretty spectacular at times. There are a lot of flashing neon lights and sparks during combat, and the angles do give it a fair amount of flair, but the substance here is just as big a part of the game as the spectacle is. Realistically, this trend started with Nier: Automata, which managed to look good and was deeper than the bog of eternal stench. Astral Chain also pulls this off with panache. There is a lot going on with the combat without it being overly complicated. It’s more depth than complexity as your attacks mainly rely on 2 buttons. 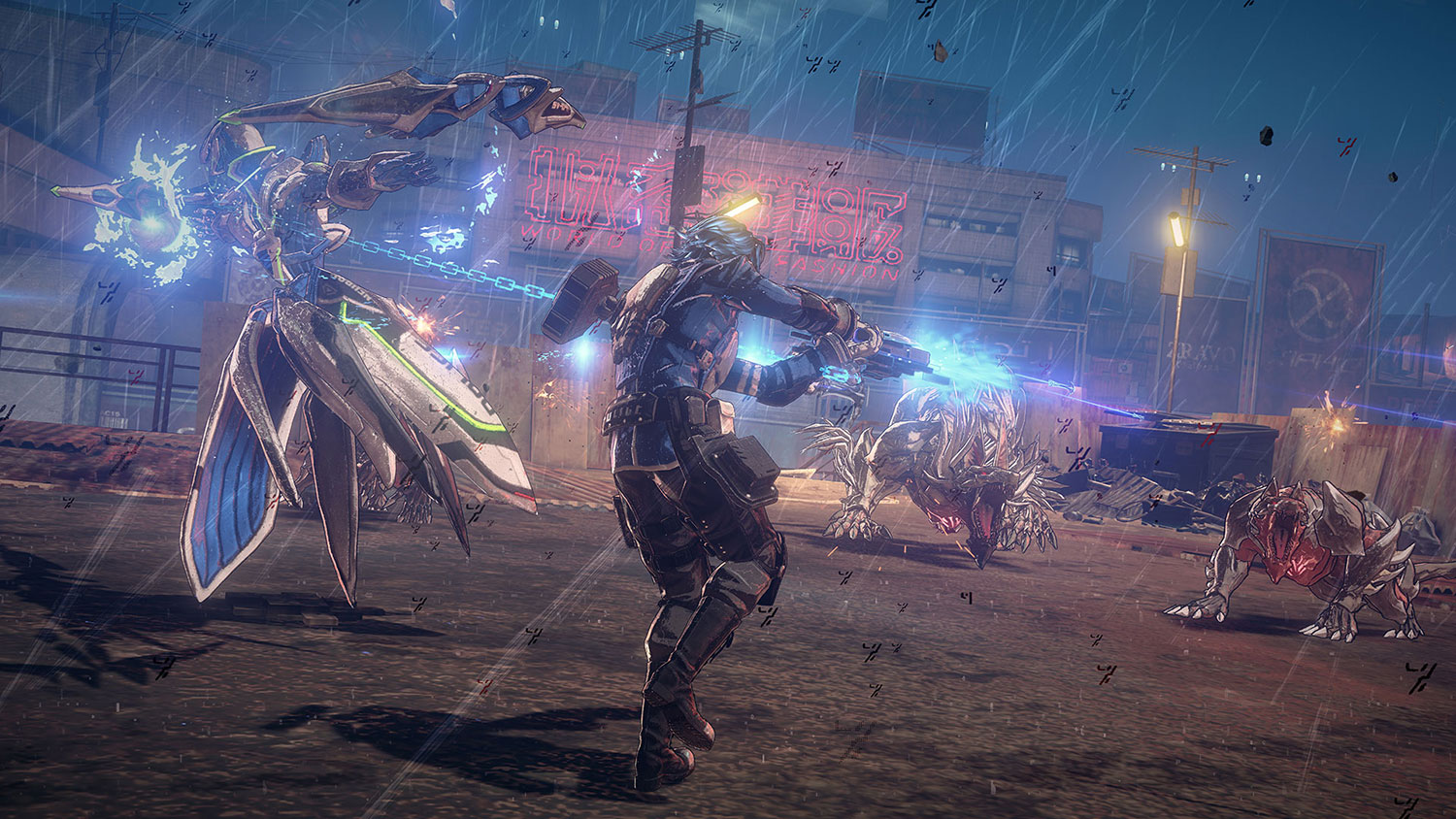 The combat isn’t the only string to Astral Chain’s bow, however. As a police officer, you also have to actually investigate crimes. When you first go out on most missions, you have to examine a crime scene to see if you can figure out what has been going on. The trouble with crimes committed by invisible monsters is that often times crimes will actually just be regular crimes for the regular police, so it’s your job to figure out if you’re even required, which you usually are. These investigation segments take place in mini-sandboxes where you can wander around collecting things and talking to people, as well as picking up and completing side-missions.

The sandbox segments are usually filled with secrets to find and items to pick up. They’re nowhere near Yakuza sandbox level of stuff to do, but that’s not necessarily a bad thing. You actually come across a fair few of these small sandboxes throughout the different chapters of the game, so having too much going on would have been a bit overwhelming. The sandboxes do bring to light one issue with the game: platforming. As I said before, you can actively move your Chimera around and use him to slingshot yourself forward. There are times when you need to do this to get around gaps for items or to progress the story. For the most part, this works okay, but there were a fair few times where I fell to my death over and over again doing this, and by the time I was done, I was glad to see the back of the platforming segments. 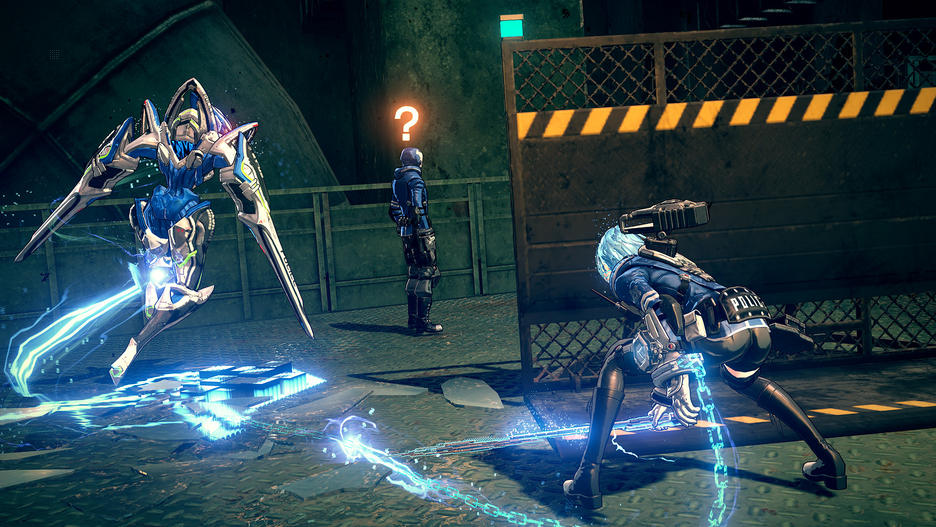 Visually, Astral Chain has that modern game ‘thing’ of being filled with neon. Apart from your attack sparks and your floating Chimera companion, the cities of the Ark are all filled to the brim with glowing neon signs and lights, especially at night. The effect doesn’t look bad or anything, it’s just a little overly prevalent. There was also a stunning amount of effort put into your hero’s customisability. As you level up and explore the world, you come across different costumes and color schemes that you can dress your character in. While this is a nice touch from a player perspective, I have to imagine that it makes him harder to identify as a member of law enforcement.

Overall, Astral Chain is a great hack-and-slash game. Looking as stylish as it does, I was half expecting it to get boring and repetitive quickly, but the combat was deep and involving, and the crime-solving asides helped to break up the gameplay really well. The secrets in the various sandboxes are great for adding some replayability too, not to mention the various difficulty levels and side-missions you might miss your first time through. With any luck, this new style of involving gameplay will become the norm for Platinum because I for one can’t wait to see if they produce something this entertaining again in the near future. 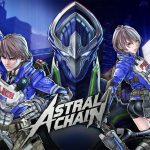 Astral Chain is a great game that manages to combine style and substance in a perfect way. While the platforming may leave something to be desired, and the game over-uses neon effects a bit too much, it also provides a great hack-and-slash RPG experience alongside crime-solving elements. The miniature sandboxes do a great job of breaking up the action and stop it from getting stale. If you've enjoyed PlatinumGames' work in the past, then you'll probably enjoy this, and if this new, deeper approach to their games continues to hold, then I can see them gaining many more fans in the future.

Do you agree with our review of Astral Chain? What are your thoughts? Tell us in the comments below. 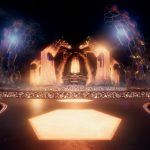 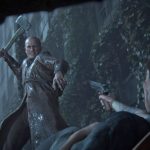