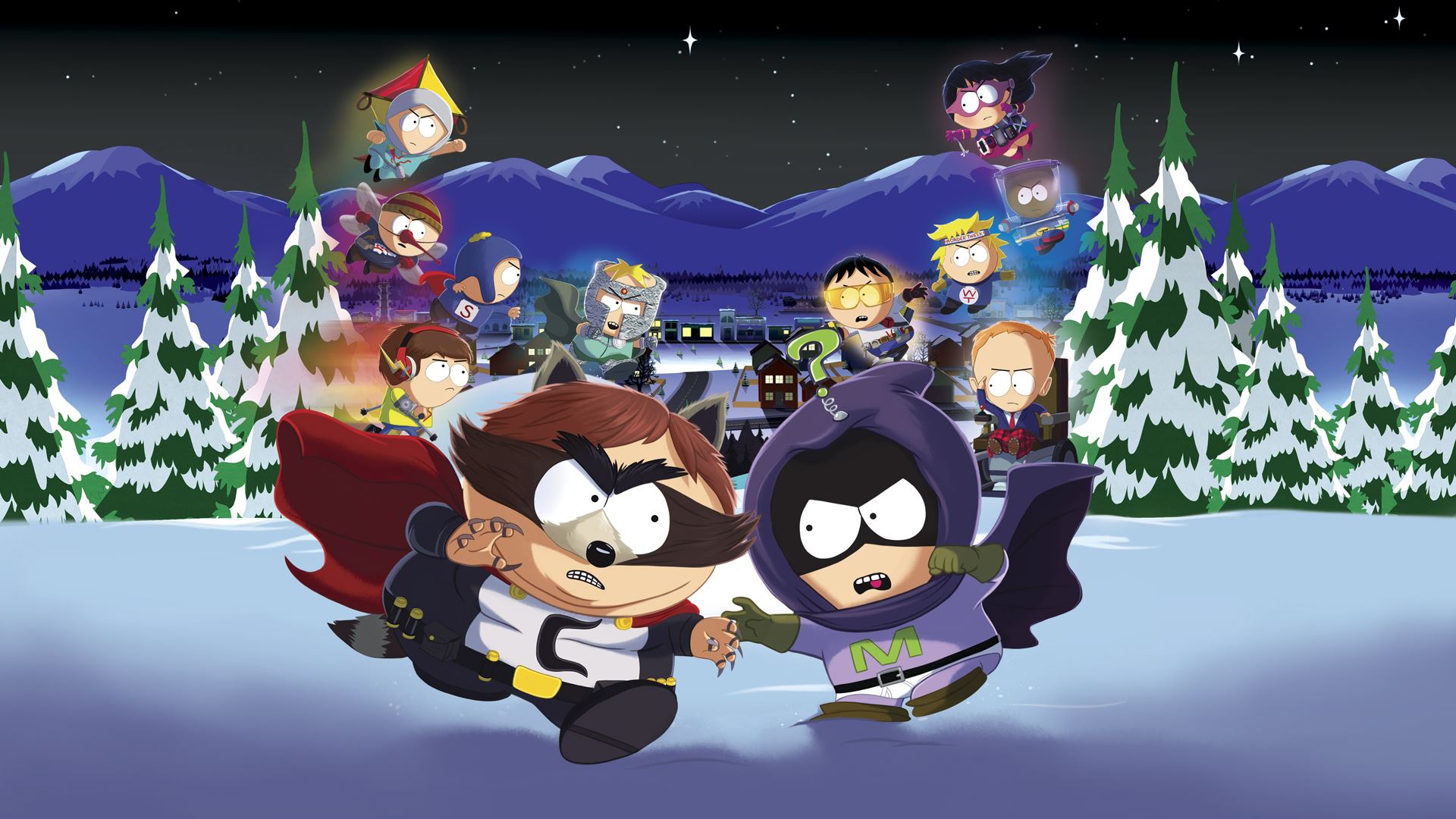 Ever since The Coon appeared in the thirteenth season of ridiculously popular but highly controversial TV show South Park, Eric Cartman’s Batman-like superhero persona has reappeared over the course of South Park’s remaining seven seasons. He’s the leader of Coon and Friends, a team of heroes conjured up from the minds of the ten-year-olds who have similar goals and look up to Eric as their leader. It makes sense to create a video game centralizing around Coon and Friends and the evil within the “quiet little mountain town”; not only that, but a rivalry with another set of superheroes, the Freedom Pals, who have the same goal but hate Cartman. South Park: The Fractured but Whole is a roleplaying game with strategic elements that follows on from 2014’s The Stick of Truth, which was a huge success. But does The Fractured but Whole come anywhere near its predecessor? 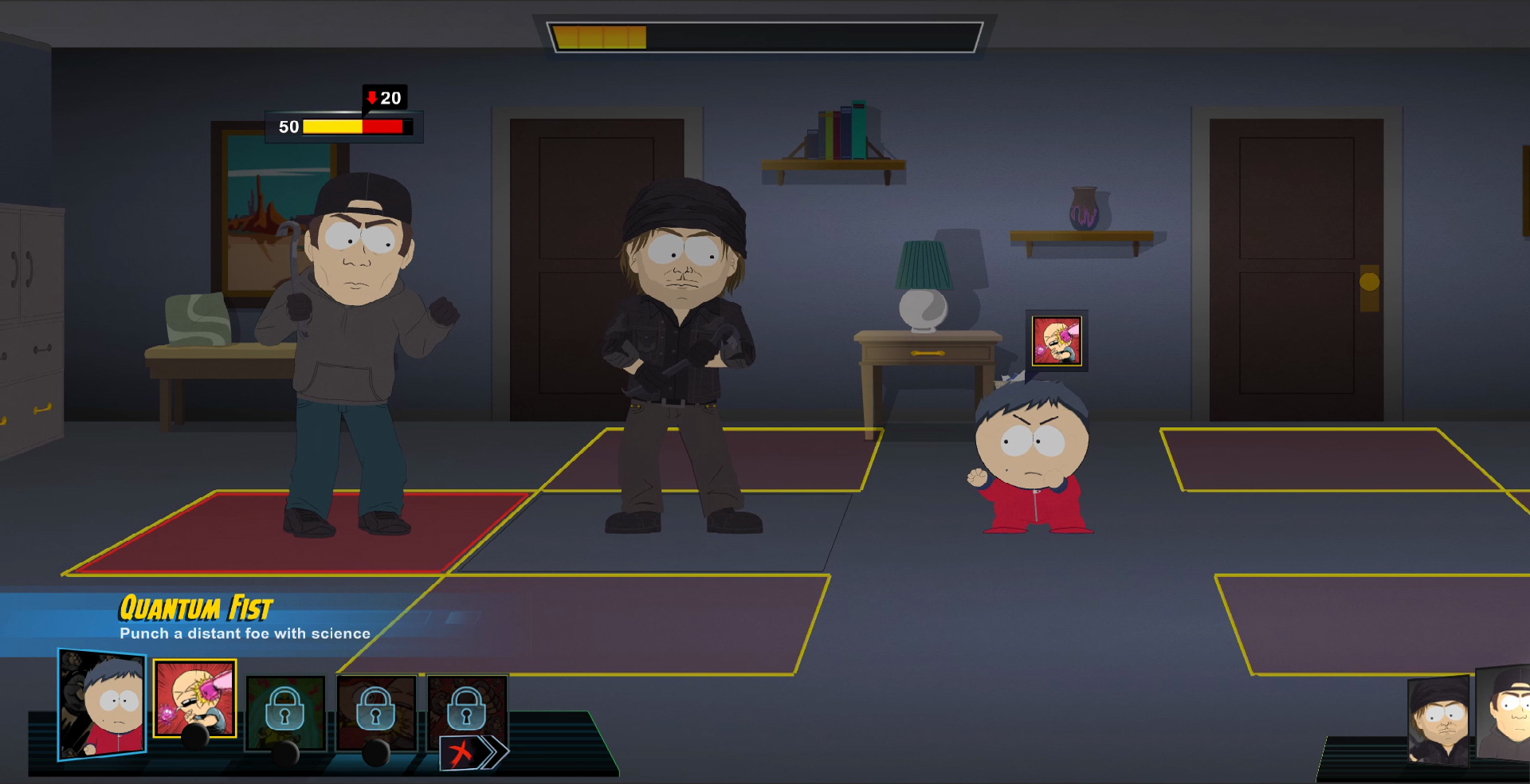 Once again, you play as the “new kid” who must become a superhero to join Coon and Friends and help hunt down Scrambles, a cat that has gone missing with a $100 reward. That reward would be helpful in the success of Coon and Friends, but there is a much deeper plot here. The South Park humour is here in all its inappropriate glory, I mean Cartman’s make-up backstory for your character is that you woke up one night and found intruders in your house, and after dealing with them, you caught your dad having sex with your mother. It doesn’t stop there either, it’s non-stop throughout the 20 hour campaign that is like playing a huge episode of the TV show. It’s a gripping plot that quickly deepens and gets very sinister while cramming in a lot of characters from the show.

As with The Stick of Truth, the town of South Park is fully explorable in The Fractured but Whole, allowing you to enter any house or shop, the school and also the Community Centre. As you walk around, you can rifle through cupboards, chests, bins, anything highlighted by hints of yellow for scrap, materials to craft with and health-replenishing items. It’s hard to stop yourself from covering the whole of South Park as every inch has something to look at referencing something from the show. 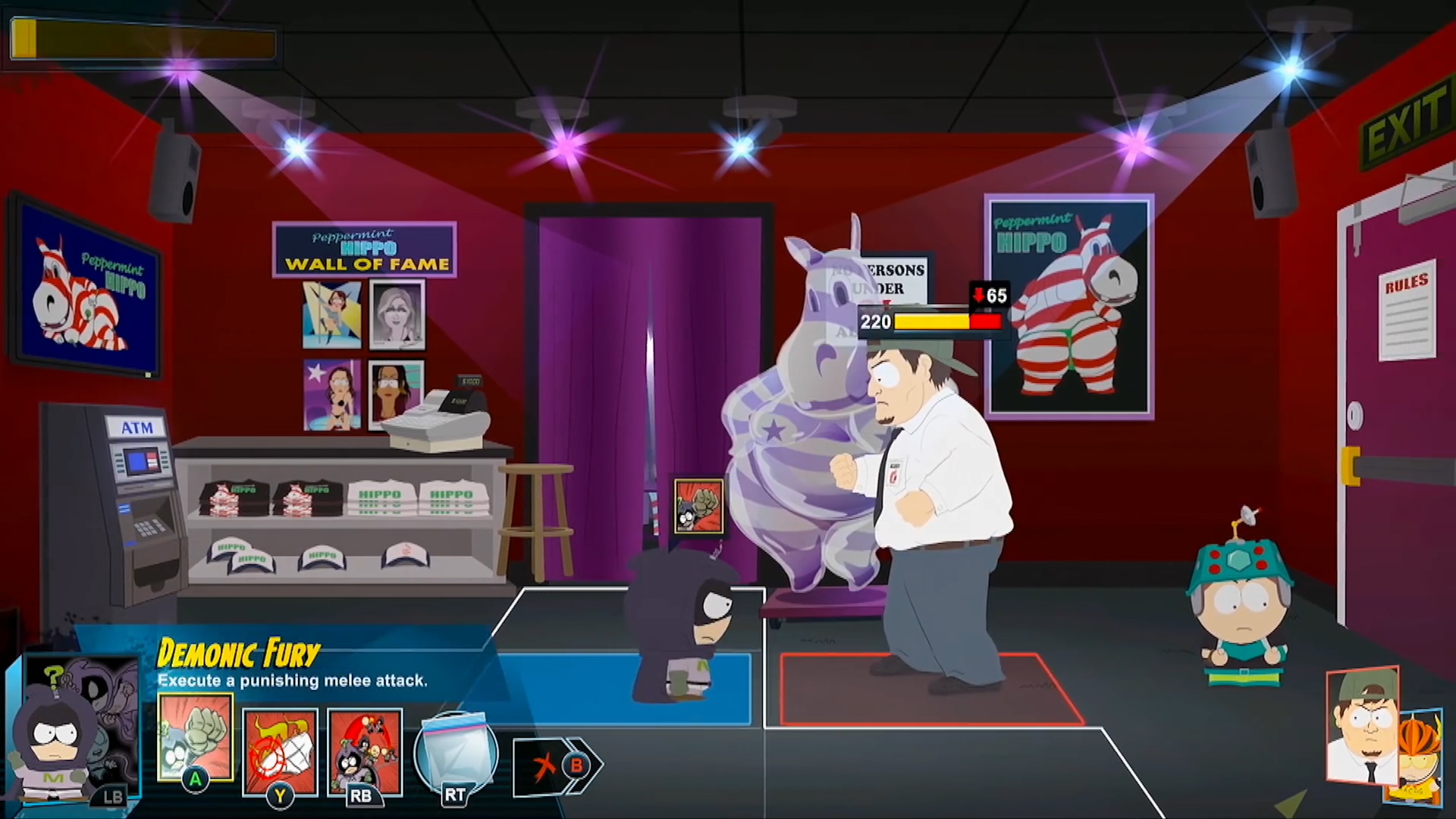 Encountering sixth graders or Professor Chaos’ minions activates the combat, which has improved from The Stick of Truth’s Final Fantasy-like system. This time every character has movement squares allowing them to freely move within them; however, you can’t perform a move on squares already occupied. Each of the three moves available to each character has an area of effect which must be taken into account. This inserts a strategy element that deepens the combat system, and it’s extremely fun to play. Your moves are determined by the classes you pick throughout your journey. Speedsters, like Jimmy’s persona Fastpass, can use their speed on the battlefield to unleash some devastating punches, or maybe you’ll be a Gadgeteer, like Cartman says is “like Iron Man but not as cool”, as you create exploding dummies and turrets. You’ll end up with three classes, but you can only have three moves, so choosing a nice, varied moveset is important. Sustaining a hit slowly fills up an Ultimate Meter that is displayed across the top of the screen. Once filled, any of your team can unleash their most powerful move which comes with a really stylish cutscene that never gets old. As a fan of the show myself, I wanted to see them all.

Aside from the problem at hand, you will come across characters that require jobs done for them, such as Big Gay Al, who has lost his cats, and Super Craig, who wants his laptop back from Wonder Tweek. The side missions are just as fun and hilarious as the main quests. Stan’s dad, Randy, may want you to find out who keeps keying his car, only to find the culprit is closer to home than he may think, sparking a hilarious fight. Your entire journey is full of these encounters, and they kept my eyes glued to the screen. 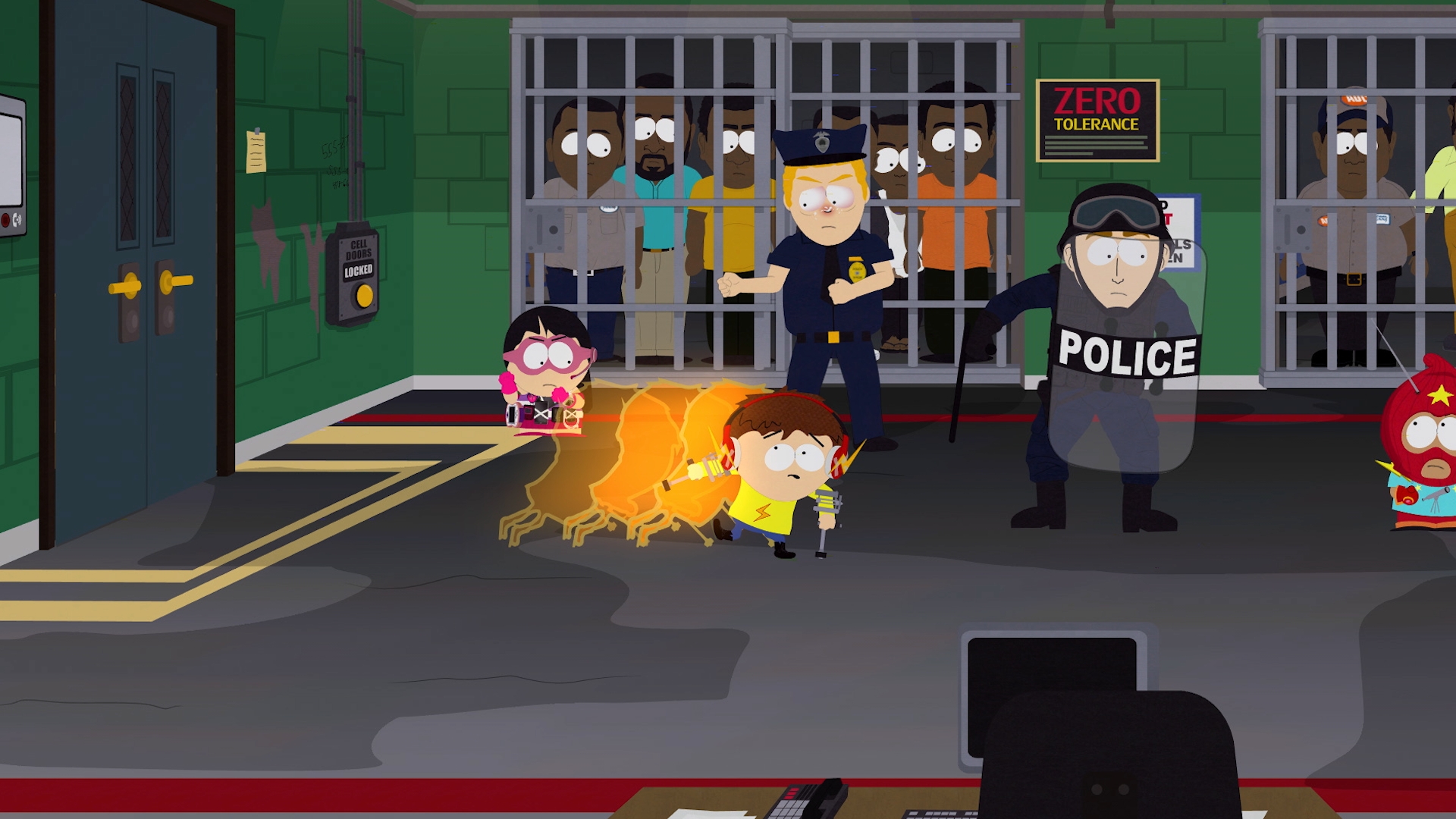 The Fractured but Whole’s progression system is a massive improvement over The Stick of Truth. As you fill up your character sheet by completing goals such as beating up so many sixth graders or performing TimeFarts (which are also used to complete the really easy puzzles throughout the town), you’ll level up, unlocking artifact slots. Artifacts are objects that you find or buy that enhance certain properties during battle. A fidget spinner may give you a knockback damage bonus, or a doll may give you extra Ultimate Meter juice per hit. There are hundreds to find, and each one has different effects. 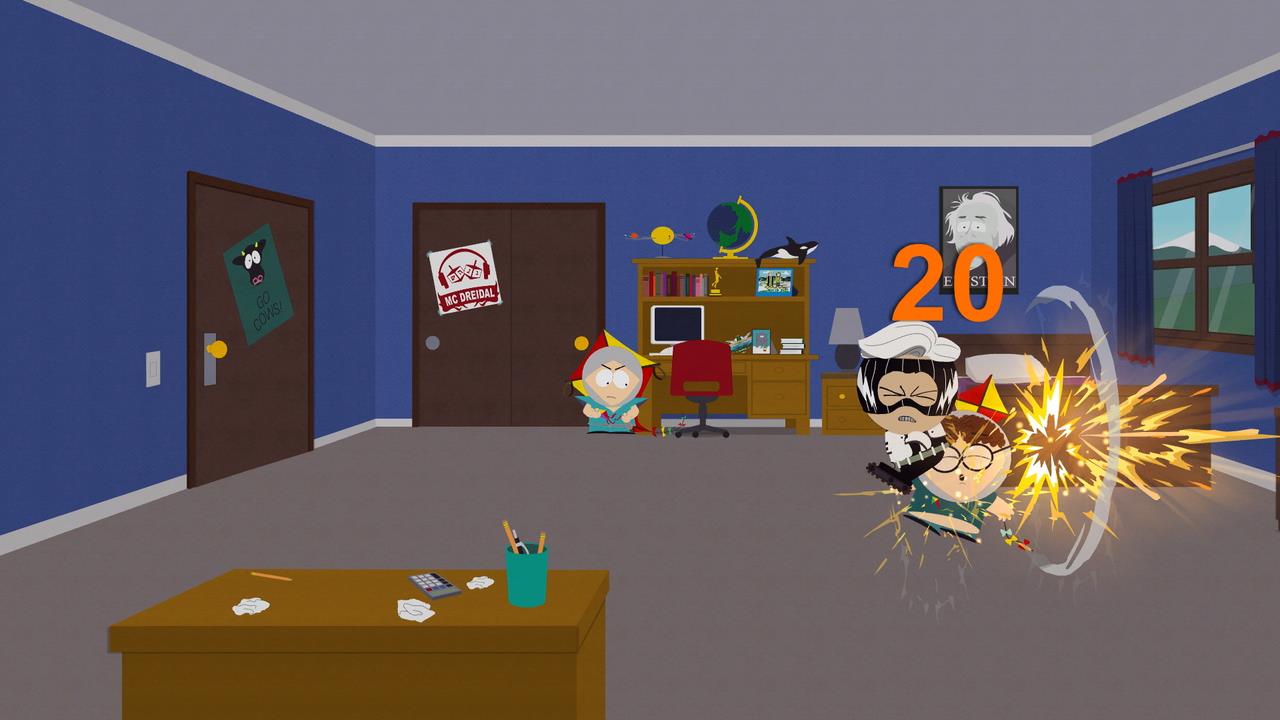 Puzzles are easy and require hardly any thought. Something as simple as having the right ability at the right situation is usually all that’s required. The TimeFart mechanic, as silly as it sounds, allows you to use your bowels to rewind time on certainly glitchy objects or briefly freeze time to cross electrified water or catch a critter that is too fast. Using TimeFarts also has its uses in combat as rewinding time during an enemy’s turn makes them skip their turn, or freezing time allows you to slip in some sucker punches before a lengthy cool down period.

South Park: The Fractured but Whole is a fantastic roleplaying game that is a must play for fans of the series. The fully explorable town, the hundreds of featured characters, the deep plot and combat and the constant South Park humour is more than enough to keep that controller in your hand. 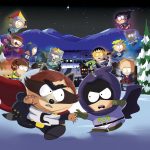 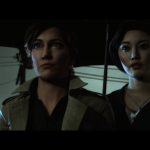