I have something of a love/hate relationship with the Souls series. It started back in 2009 with the release of Demon’s Souls. Drawn in by the great feedback I’d heard from hardcore gamers from all over the world, I imported a copy of the US version. Going in, I didn’t really know what to expect, but it soon hooked me in, grew on me, and I quickly became addicted. I eagerly awaited the follow-up, however when Dark Souls arrived, I ended up rage quitting the game midway through as I couldn’t beat the infamous duo of Ornstein and Smough. As a result, I didn’t even bother with Dark Souls II, and whilst I enjoyed Bloodborne, I didn’t get to the end as other games dragged me away. Fast forward to Dark Souls III and I vowed to finish the game, and having done so I can officially say I’m done with the series, regardless of whether it’s the last entry in the franchise or if they go on to do something similar, just under a different name like they’ve done before.

Now Dark Souls III isn’t a bad game, it’s a very solid RPG and another display of greatness for the Souls series; the quality has been turned up a notch in order to truly send the franchise off in style. But the overall experience is let down by a number of design problems, as well as the fact that the game is simply too frustrating for its own good at times. Dark Souls III’s vertiginous learning curve also makes it extremely difficult to recommend to newcomers, with even seasoned Souls campaigners likely to have moments where they’re forced to put the controller down and Google or YouTube for answers or to find out where to go next. Ultimately, Dark Souls III, although frustrating and annoying at times, was never intended to cater to anyone but its fans, so you have to respect the developers for that. 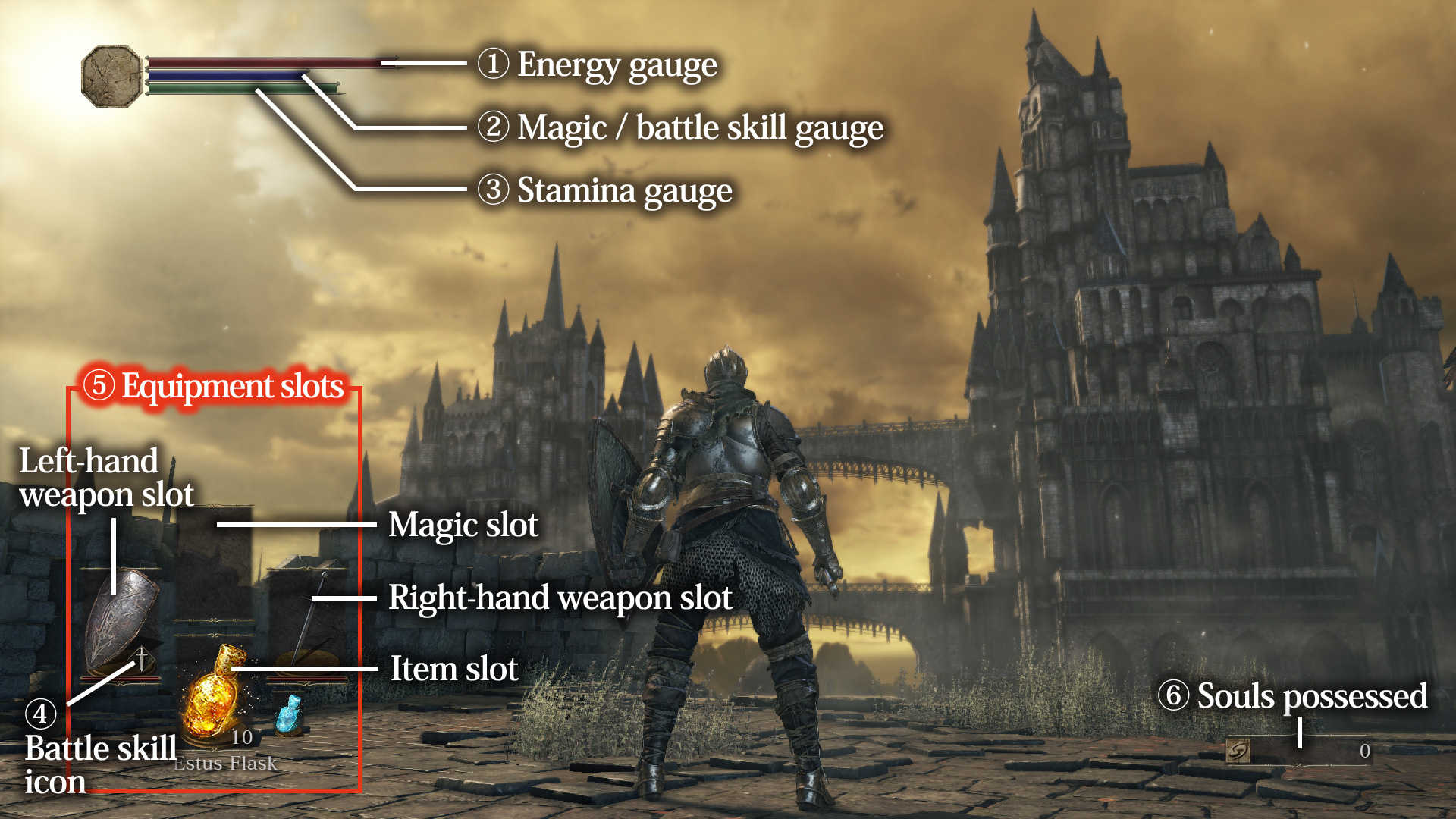 The story isn’t shoved in your face and cut-scenes are a rare sight, instead the very deep lore and twisted story of the war between light and dark is told via the numerous characters you meet in the dark fantasy world of Lothric. If you want to fully involve yourself in this twisted tale and truly immerse yourself in the nightmarish world of Dark Souls III, you’ll need to dig deep to uncover all of the secrets, twists, and turns. The basic premise is that your character, the “Unkindled Ash”, is risen by the mysterious Fire Keeper who needs to restore the link to the First Flame to prevent the cycle of an oncoming apocalypse. This is only possible by defeating and bringing back the Lords of Cinder, four past heroes, to their thrones within the Firelink Shrine. It’s no easy task. They are powerful adversaries Aldritch saint of the Deep, Yhorm the Giant, Farron and his Abyss watchers and Holy King Lothric himself all require taking down in order to drag them back to their rightful places.

Dark Souls III‘s best quality is without doubt its gameplay, with a number of improvements added to make it the best in the series. Combat is brutal, and you’re pitted against merciless enemies that will make short work of you given half the chance. A key improvement from the first two games is that combat is now faster and more fluid than ever before, a great decision that hugely benefits the game and significantly improves movement, rolling, and general fighting. Another fantastic addition to the combat is the weapon arts that are gradually added to a weapon’s move-set, essentially they are special abilities that can be triggered when your weapon is wielded two-handed or in your left hand. Some of these abilities give your character temporary buffs, with War Cry boosting attack power and Galvanise increasing stamina, while others are powerful attacks that can decisively shift the flow of a battle. Highlights in this latter category include Onislayer, which can destroy foes in one hit and Spin Sweep, which lets off a barrage of attacks that hit multiple foes. There are many more depending on the weapon type you have, but the use of these game-changing special attacks is sensibly rationed, with each weapon art using the player’s  Focus Points (FP) bar. 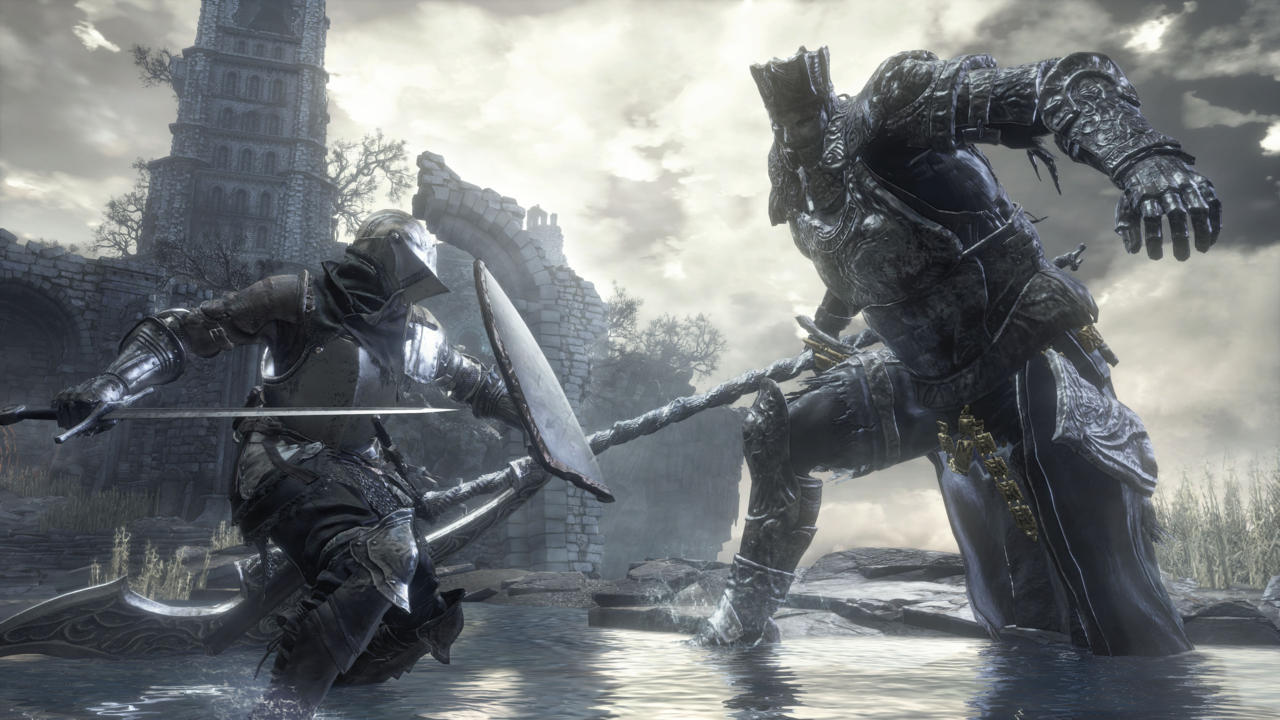 Dark Souls III is also among an increasing number of games that seamlessly combine single player and online play. Fundamentally, although you are playing alone in your own world, you are always online and will occasionally see the ghosts of other players from another dimension in your world, enabling you to briefly see what they are doing. If a player dies in their world, you can see their bloodstain in yours and watch the last few seconds of their life before they died, using that as a warning that something might be ahead that can kill you. Players can also leave messages, which generally either give tips on how to beat an upcoming boss or inform other players that there’s an ambush up ahead or a secret area or item nearby. While the community is often very good, it cannot be trusted entirely, with a number of players having taken to leaving wrong or misleading messages in order to cause havoc in someone else’s world. This can have serious consequences, as vital NPCs can be killed by players following malicious messages, permanently ruining that player’s save. In short, be very careful and never attack an NPC just because another player told you to.

Another key strength is the huge world of Lothric, which is made up of over 15 areas, some brand new to the series and others returning from previous games in new and challenging forms. For example, Anor Londo, the legendary city of the Gods makes a welcomes re-appearance, and it was fascinating to see that where it once shone with radiant sunlight, it is now entirely dark due to events in the previous game. Each of these areas is vast and very varied, with unique enemy types. Moreover, some areas are optional and easy to miss if you’re not paying attention. A vital pillar of Dark Souls III is exploration, and if you don’t explore you will miss out on progression, key items, weapons, and characters you can invite back to the Firelink Shrine. 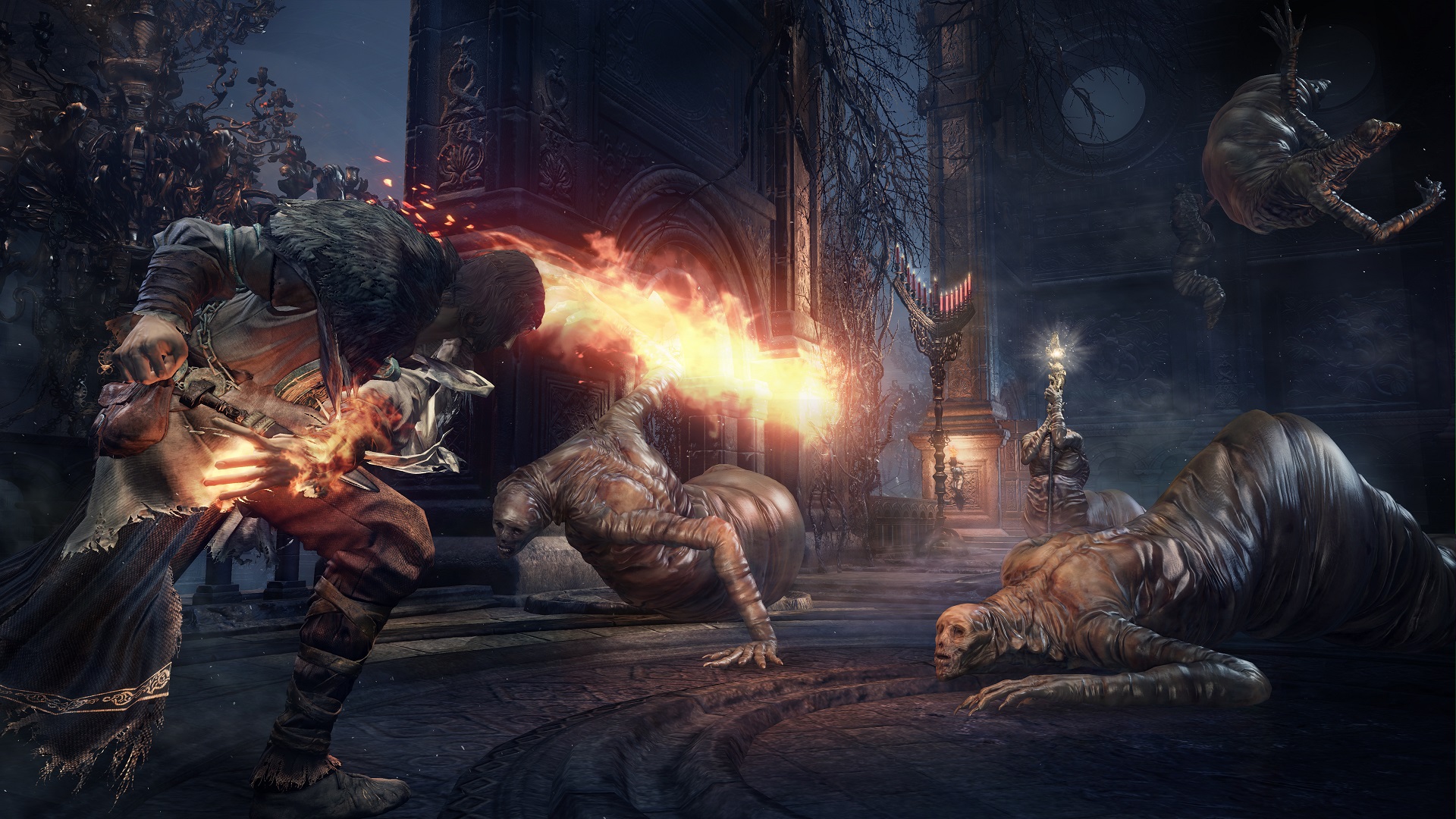 Another important element in Dark Souls III is Player vs Player (PvP) combat. This system is extremely unpredictable, once you invade or someone gets summoned into your world all hell can break loose, with up to six players able to join one session and battles including 1vs1, 3vs3, or even 5vs1 encounters. Servers are dedicated, but lag frequently, one of the main technical issues with the game. Covenants are smartly implemented and strongly tie into these PvP encounters, overall there are eight, with each covenant essentially being a faction that is tasked with performing a certain role in the Dark Souls III universe. If you join the Watchdogs of Farron for example, your task is to defend the forest woods and you will be summoned to eliminate anyone who enters that area, which then earns rewards specific to that covenant. Aside from the lag, the other major issue with PvP combat is that you can’t test your skills out in circumstances of your choosing. An arena mode which allowed players to decide the parameters of the fight (such as 1vs1 with no health potions allowed) would be a fantastic addition.

One final tip for newcomers to the Souls universe, the key to beating Dark Souls III is to have patience, the game’s biggest and hardest enemy is yourself, if you let frustration get the better of you, you will fail frequently and painfully. You will start to do stupid things like rushing into mobs and ending up getting killed time and time again, you’ll get wiped out easily in boss fights, and you’ll forget the simple basics of the game, such as blocking, parrying, and backstabs. However, once you get over the fact that Dark Souls III is a hard game and start to play sensibly, the game is easily beatable, especially with all the help via signs and online co-op.

So I’ve finally completed it. Dark Souls 3, the toughest game I’ve ever played. I quickly abandoned previous Souls games but Dark Souls 3 gripped me and wouldn’t let me go. After promising myself that I would stick to it this time and actually finish one of these games, my determination soon paid off and, once the credits rolled. Dark Souls 3 has surprisingly became one of my favorite games of all time.

What makes it so good? Firstly, its structure is easier to understand than previous Souls games. The Firelink Shrine acts as your hub to level up, buy and sell items or buff up weapons and is a vital safe haven, an ideal location for a much needed breather from the terrors of Dark Souls. The world of Lothric, which is a thing of beauty in itself, is full of expertly designed, tough opponents ranging from iron clad knights wielding huge swords to hulking monstrosities that want nothing more than to tear your face off. Thankfully, the combat is sublime, a nuanced and finely balanced system in which even the smallest grunt can become a big problem is not attacked with careful thinking and timing. Then there’s the slew of bosses that truly bring the game to another level, and have quickly become infamous among the Dark Souls community.

Vitally, Dark Souls 3 gripped me more than previous Souls games because it’s so much more playable than previous entries in the series. If you’re stuck, summoning other players or NPCs to help is a given, a strategy that saved my bacon and helped me progress on many occasions. The game’s PVP combat is fun but I enjoyed playing through the story so much more, uncovering lore and backstory by speaking to friendlies scattered around Lothric and reading the descriptions that accompany the discovery of hundreds of hidden items.

Finally, as you’d expect from a serious candidate for all-time gaming greatness, Dark Souls 3 has some amazing moments. In fact some are truly breathtaking, involving huge dragons, gorgeous sights and epic fights that live long in the memory. This unique combination of intricate combat, immersive lore and stunning showdowns means that Dark Souls 3 proudly takes its place up among my favourite games of all time. It’s by no means a walk in the park, and at times is seriously unfair, but that only makes it all the more satisfying when you overcome what seemed impossible. It is the struggle and eventual triumph that defines the Souls series and Dark Souls 3 is its perfect realisation.