When I was a wee boy all them years ago, and gaming magazines were the only real source of news, they always had a section in the back of the magazine that showcased the best games voted by people.

I always saw Civilization pushing the top three all the time. So after a few attempts of shrugging the temptation off, I gave it a try. It’s fair to say after owning all the Civilization games since Civilization II and all their spin-offs, I can understand people’s obsession with the series. Civilization VI is no exception and is perhaps the best in the series too.

First impressions for an avid fan of the series tell me that, visually, the game had taken a step back rather then forward, but after countless hours of playing, I actually like the art style they choose. No longer is there crummy fog of war, instead a crudely drawn map is shown which is authentic. The music is actually nice to listen to this time around and not dull or boring, but after longer playthroughs for many people, it gets there, but a bit of your own music would remedy that. The classic style still remains though like the hexagonal tiles of which you settle cities on to advance your Civilization. Desert, Forest, Jungle, Grass, and Mountain tiles litter the map and make up the world of which you will conquer in your unique way; my way always seems to end with war, but to each their own, I suppose. That’s the beauty of Civilization games. 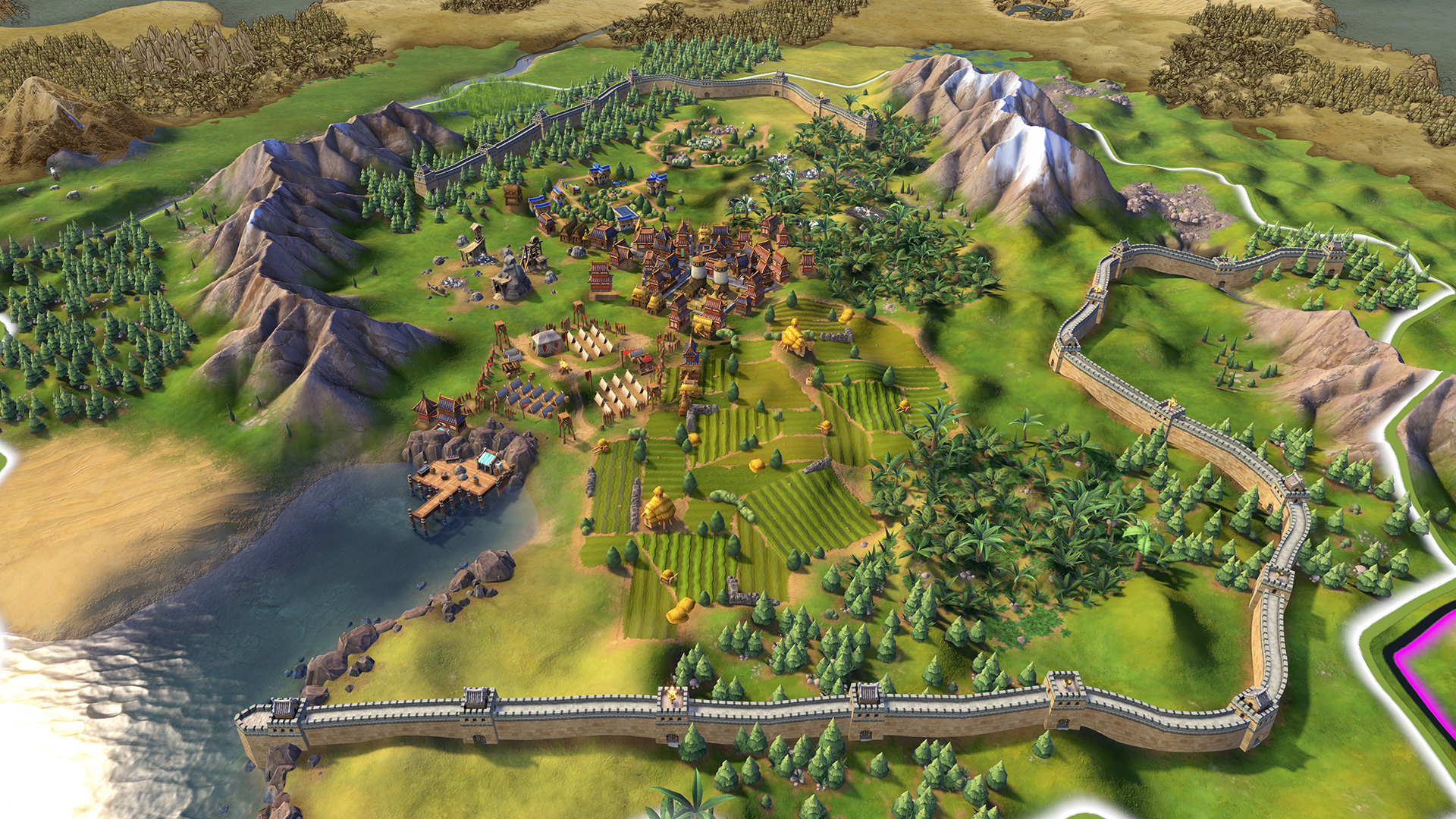 When selecting my race and maps at the start, I was greeted with a very dumbed down ‘Advanced’ tab on single-player creation. A few options like the ‘Raging Barbarians’ option have been done away with, and considering the AI of the barbarians have had a boost to their AI functions, it would have been nice for the challenge at the start, but hey, maybe in a later stage we will see it added.

Most races now have more than one leader too, for example, the Greeks have Pericles and Gorgo. These two different leaders have different capitals and different unique units, but not all races seem to have multiple leaders which leads me to think DLC? The lack of maps is also an issue and further leads me to believe that future DLC is on the horizon. Each race has an animated leader that speaks occasionally in their own dialect. Diplomacy is a lot easier this time around, but actually striking a deal with an AI leader proved difficult, and it seemed the higher the game difficulty so was the chance of success. War was also inevitable with higher difficulties; AI leaders seemed to declare war almost instantly in every playthrough. It almost felt like a rushing technique from StarCraft II, and it certainly added to the difficulty rating, no doubt.

The UI is much better this time around. Everything I need to know is displayed at the click of a button: Great Persons, Research, Civic Tree, and your Great Works can all be seen at the top left corner. The opposing factions can be seen in the top right and can be spoken to directly by clicking on their portraits. It’s a much needed improvement over V, and the improvements don’t stop there. AI recommendations are no longer split into different categories like Culture, Tech, and Military. The recommended unit or building is now identified by a simple icon which is a relief. 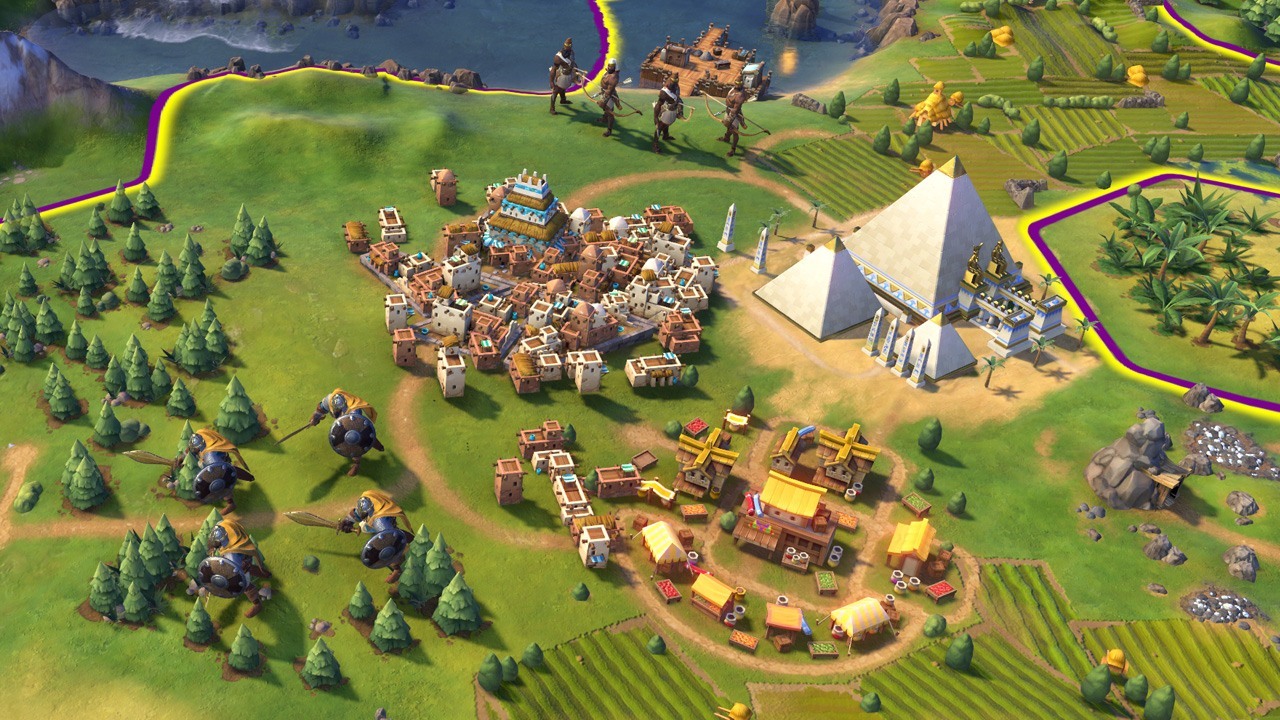 Civilization pros returning to the series shouldn’t really have much of a problem learning the new mechanics. Builders now replace Workers, and they are limited to 3 uses for improving tiles around your city, which means you need to be a bit more tactical in their use. But as you progress further into your civil tree, you will unlock cards that give builders more uses by being able to improve them more than the basic three times. Along with this change tile improvements are instant, and gone are the X amount of turns for improvement.

The changes continue with the new Tech and Civil Trees, and gone is the massive Technology tree. It is replaced with a more simplistic Tech tree and another tree, The Civil tree. This is a move I like, the Tech tree was very confusing in Civilization V with just too much to choose from, but the new tree seems to do things right. My only grief is the pace of the game and the speed at which it progresses. Technology seems to progress far too quickly with a new feature brought to Civilization VI. When certain criteria are met such as settling a city next to the sea, you have a ‘Eureka’ moment in which you receive a bonus to that tech. Yes, you can turn the pace at which the speed of the game progresses, but all that does is pump up the amount of turns it takes to train units and build buildings too. I felt like there was further balance needed between the Tech tree and Time itself; some eras I flew through without even enjoying that era’s units and buildings. 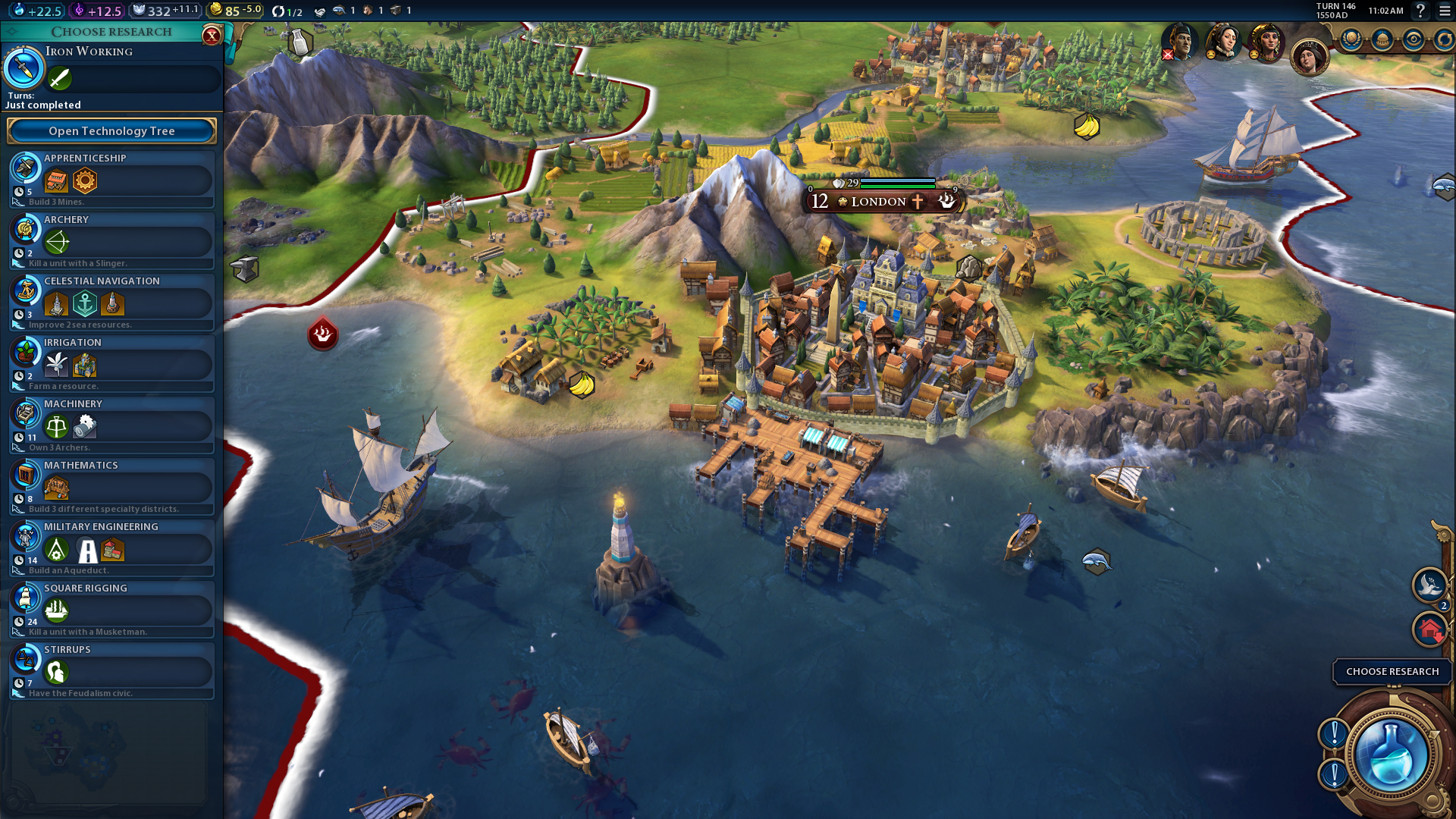 The map is perhaps Civilization VI’s biggest upgrade. Wonders now also take up tiles rather then just being built in the city, meaning you now have to be tactical in how you place your wonders and districts. Certain tiles belong to certain wonders, which is correct in theory. The Great Pyramids belong to a desert tile, etc. Districts are new to Civilization VI, and certain districts like the commercial district improve your wealth gains. There is a district for each resource: Faith, Research, Gold, Cultural. These districts are then able to progress with buildings: Banks are built in the commercial district, universities built in the campus district, and cathedrals built in the holy site district. It adds a new layer of thinking to how you process your turns and your resources. Improving tiles has always been around, but what sets it apart this time around is a little thought has to go into how you place your districts. As you progress through the eras, new technology unlocks; the tile you put your Holy Site district on could possibly have been better used for your Industrial District later on. This type of gameplay leads to some frustration for perfectionists like me. I found myself restarting a map time and time again until I felt I had done it right, only to get to a later age and notice I forgot about the National Park I could have constructed but can now no longer build. Some sort of utility tool would have been nice so you could see what you can build at a later stage, but it kind of adds to the randomness that is Civilization.

Combat this time around has been improved yet again. Civilization V saw the end of the ‘Stack of Doom’, so now troops had to be tactically placed one per tile. This still wasn’t the best way to tackle the situation. Civilization VI improves on this yet again with troops of the same kind being able to form a corps and then an army, making that unit a much stronger version of the first, and it actually sounds correct. Units can also share with support type units and can be linked so that they move together. Early in the game you can produce Siege Towers and Battering Rams, and these can be linked with your troops to negate the city walls, and it doesn’t stop there. As you advance medics and other support units unlock. Great Generals are another powerful support unit.