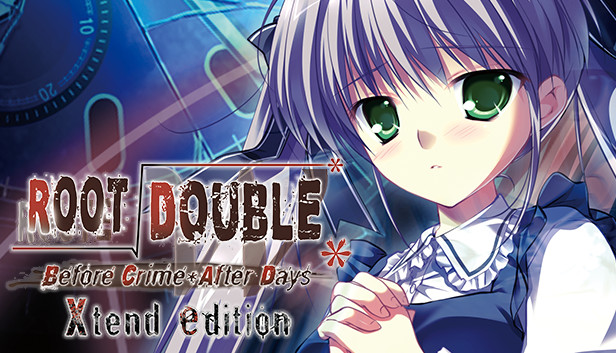 After its initial release in 2012, Root Double – Before Crime * After Days by Sekai games was granted an extended edition and was released for PC in 2016, and after four years, it is available for the Nintendo Switch, which is, in my opinion, the perfect way to experience this visual novel. I’ll admit that I’m not usually the biggest fan of visual novels as they just aren’t interactive enough to keep my attention, but both the story and the innovative progression system for this title had me intrigued enough to give it a try.

There’s not all that much to say about the visuals – it’s an anime-style visual novel, and it looks pretty good on the Switch, even if some of the scenery is a little repetitive (I’m talking about you, broken staircase). Obviously, there wasn’t a lot going on on-screen since the majority of it is static artwork, but there was enough to keep me engaged. The music was effective and fit well with each different situation, and there are 34 tracks to uncover as you progress through the game. It’s fully voiced too, which is always a positive in my book. 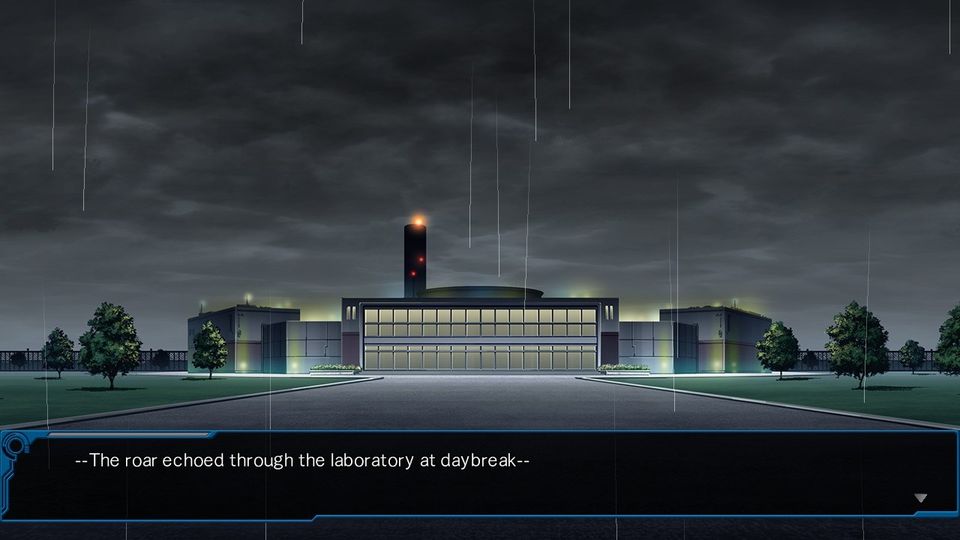 In the year 2030, where telepathy and empathy aren’t just something out of a sci-fi movie, a series of explosions tear through the city of Rokumei’s nuclear research facility, LABO. An elite rescue squad known as Sirius is deployed to deal with the explosion, but when the facility’s nuclear reactor goes into meltdown, the whole facility is put into lockdown with the rescue squad and several survivors still inside. If the raging fires weren’t enough to deal with, radiation is leaking throughout the facility at an alarming, ever-growing rate, and our survivors don’t have enough anti-radiation medication to keep them all alive until the lockdown ends.

There are four different routes that make up the story of Root Double, but only the first two are initially available – “Before” and A”fter”. “Before” follows the story of Natsuhiko Tenkawa, a student attending a prestigious school dedicated to teaching those with the aptitude for BC (Beyond Communication, which means your telepathy and empathy). Natsuhiko’s story alternates between the present, where he and his friends are attempting to escape LABO before the facility goes into lockdown, and the past few days that led up to the event as he searches for clues within his memory that may help him survive. “After” follows amnesiac Captain Watase Kasasagi as he attempts to survive the hours after the initial explosions alongside his squad members and the survivors he finds along the way. 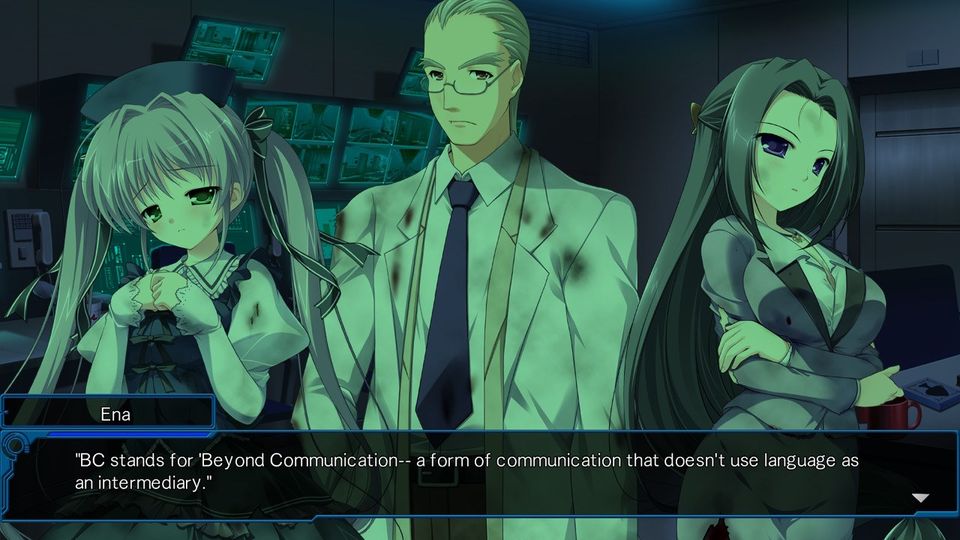 The “After” route was, in my opinion, the more enjoyable of the two. It was much more nerve wracking – the sort of story that you don’t want to put down so much that you easily find yourself losing track of time. While the “Before” route had a lot to offer in terms of context, especially when it came to the depiction of BC, it felt like it was being dragged out more than necessary. Natsuhiko’s memories are definitely relevant to the plot, but there was far too much time devoted to the gang simply sitting around the table eating or talking about books, which made it feel a little too much like a slice of life story for my liking at times.

It is only through playing all the routes that you will uncover the full story. 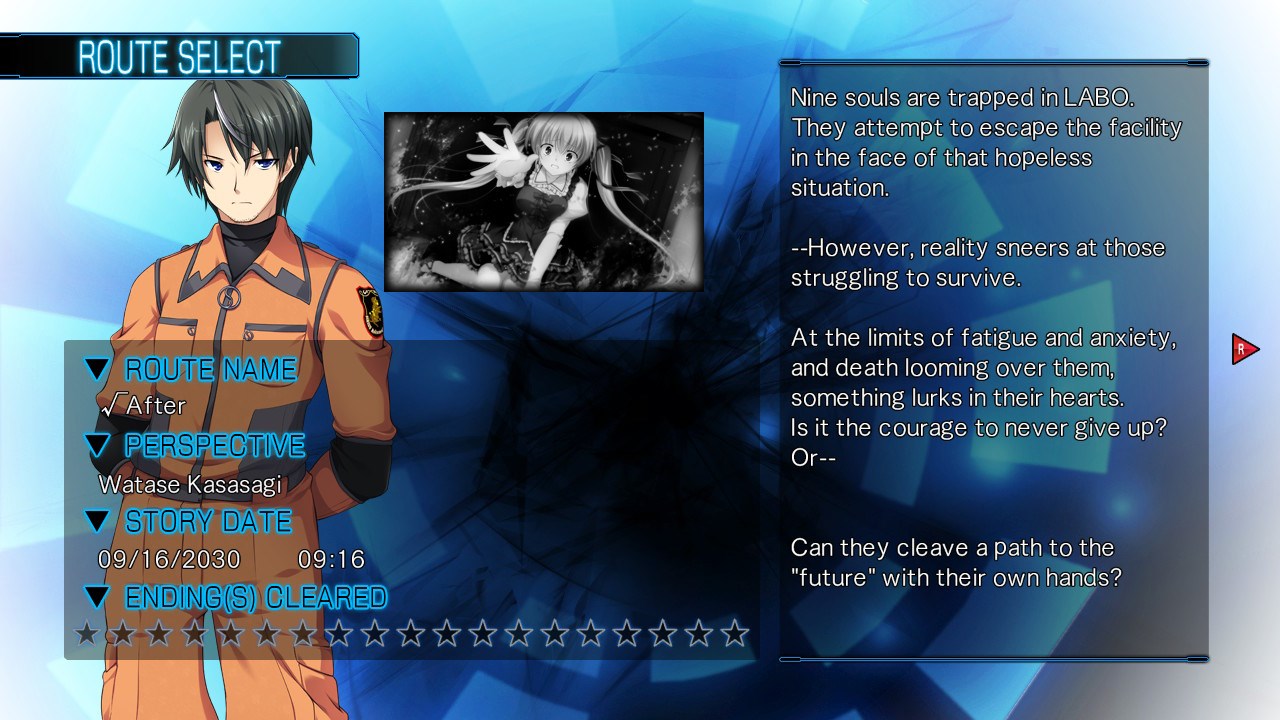 Root Double – Before Crime * After Days follows the same basic structure as an average visual novel and boasts 39 different endings. Unlike a traditional visual novel, however, the process of driving the story forward is a little different from the familiar choice-based structure. Instead, Root Double uses the Senses Sympathy System (SSS), which allows the story to unfold through emotion. It does this through a nine-pointed diagram that allows you to set the value for each character relevant at that time using a slider. Essentially, too much or too little trust in a character can lead to certain death, and confrontation from a low SSS score can waste valuable time and drastically alter the course of the story.

The system took a little time to figure out as it isn’t as clear cut as selecting options with an at least somewhat predictable outcome. Of course, you can assume that if it comes down to a situation where you have to choose between characters, the protagonists will choose to side with the one they have the higher SSS score for, but apart from that, it’s fairly ambiguous, which in my opinion, adds to the appeal. Too often in choice-based games do you pick options purely to lead to the outcome you want. Root Double effectively eliminates this with some of the SSS scores you pick not showing much of an impact until later on in the game. Root Double doesn’t leave you entirely blind though – the importance of an SSS decision is shown by the colour on the diagram. A blue outline means it’s mostly inconsequential (though these can add up and become very consequential), a yellow outline means it’s pretty important to the story, and a red outline means it’s very important. 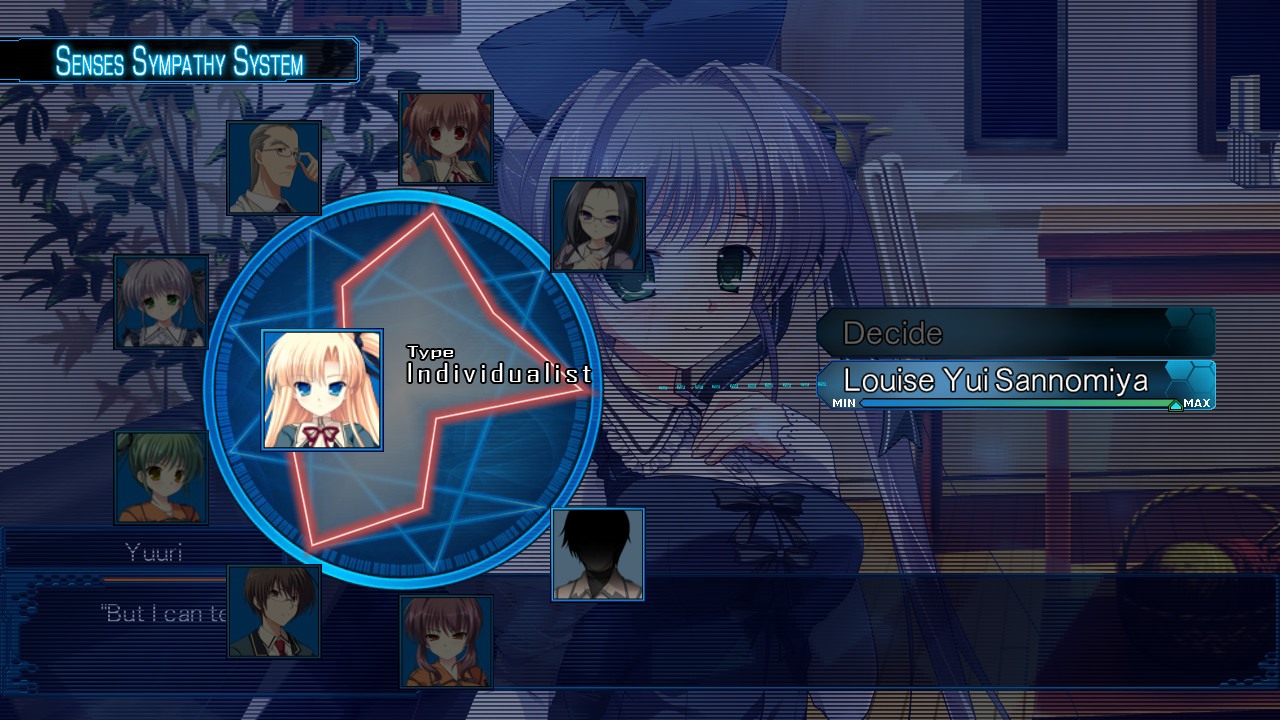 As I mentioned before, there are multiple endings spread throughout the routes – the majority of them bad. There are many ways in which our protagonists can snuff it, but when you reach the dreaded Game Over screen, Root Double gives you advice on how to avert your fate. It can be a little time consuming to backtrack, but Root Double systematically saves before any SSS score is submitted, so as long as you have a general idea of when everything went wrong, it isn’t too much trouble, and once you’ve managed to complete a route, a more traditional choice-based mode becomes available for that routem which makes it easier to complete the rest of the endings.

Root Double – Before Crime * After Days is a prime example of a visual novel done right. It’s classed as an adventure visual novel, but there are definitely aspects of mystery and horror mixed in there too, along with some other deeper themes that are touched on, such as discrimination and human nature. There’s a whole sea of visual novels out there, but its Senses Sympathy System is what makes Root Double truly shine, so if you’re a fan of the genre, Root Double definitely shouldn’t be missed.

I’ve never been a fan of visual novels, but Root Double might just have converted me. 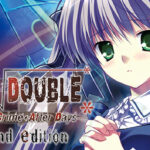 Gaming Respawn’s copy of Root Double – Before Crime * After Days – Xtend Edition was provided by the publisher. 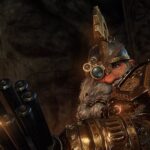 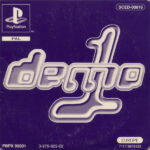