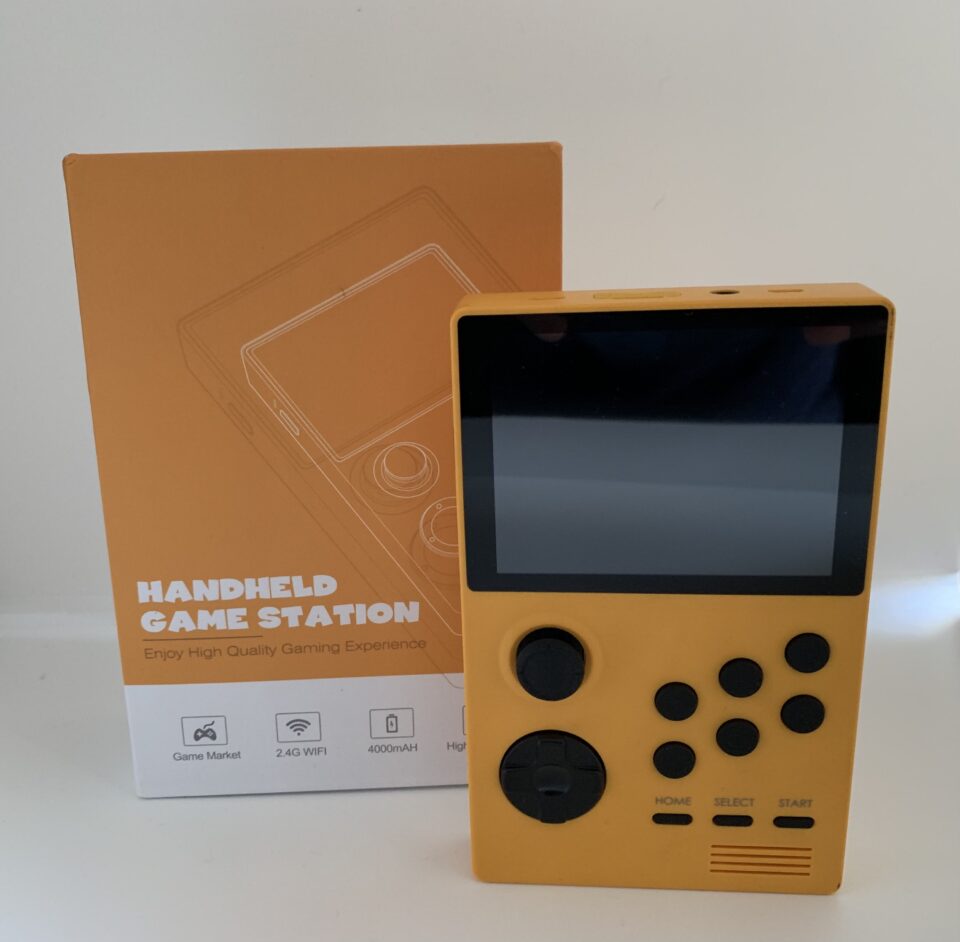 It really is a jungle out there when it comes to retro gaming handhelds. The majority of them are just re-packaged with a different branding but with exactly the same specifications. This particular one falls into that category. Provided to me for review by PloyLab, we have the ‘Handheld Game Station’ as it is named on the box, or is it the ‘Powkiddy A19’ as it’s listed on the Ploylab website? But wait, boot it up and the boot screen calls it the ‘Pandora Games Mini’. Do you see where I’m going with this?

A bit confusing, yes, but to be honest, regardless of what you call it, they all do more or less the same thing, and that is to play retro games from some of the best gaming platforms from our childhood eras.

This is the second generation of this particular handheld, as you can tell by looking at the D-pad as the previous one before it was poorly designed, which many complained about. So, is the A19 (we will call it that name for ease) able to compete against other handhelds of this type and similar price point? Priced at $99.99 on the Ploylab website, which is equivalent to around £80 in the UK, it’s not going to break the bank.

I recently reviewed the Anbernic RG351P,  a handheld which could play almost every emulator that you could throw at it. Even then it still struggled to play some PSP, Dreamcast and N64 games, even with its 1GB of Ram. The A19 only comes with 512MB, which straight away will tell you that it’s going to be nowhere near as powerful as the RG351P. But before you give up on the A19 and stop reading, this is still one very capable handheld.

So, let’s take a closer look at the A19. The packaging is no thrills, with a simple two-color cardboard box with a retro feel to it. The box comes in 3 different colours, depending which one you buy, mine being the orange version, which I think gives it a nice retro feel. In the box you will get the console and a micro USB cable for charging, a 32GB micro SD card, and that’s it. No instruction manual or screen protector, and no Wi-Fi dongle like the RG351P, which I will get to later. 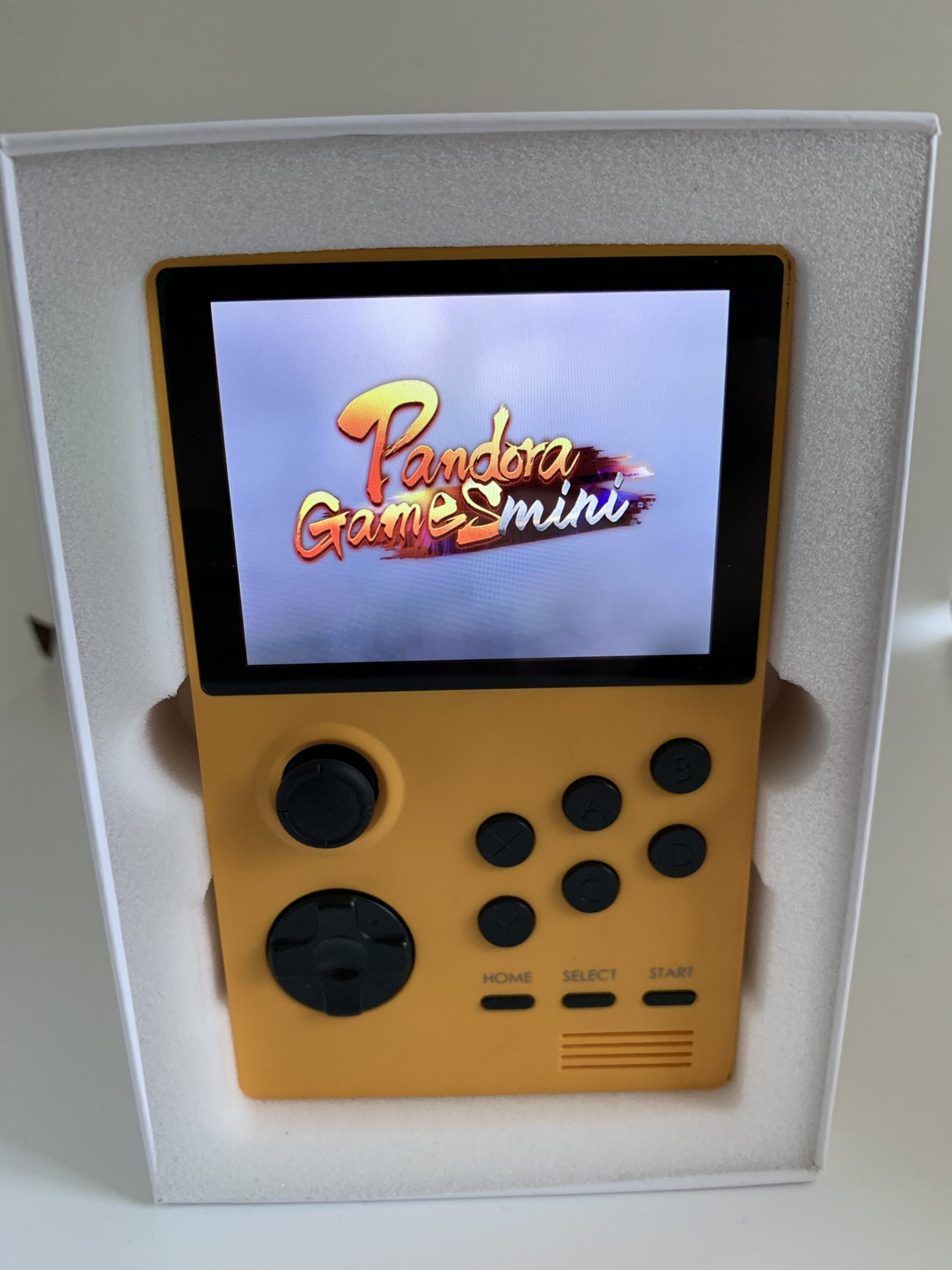 Available in 3 different colours: white, orange or blue, the A19 is made of a rather basic plastic, resulting in some light leakage from around the screen, particularly in the dark. It also feels very light in the hand compared to other handhelds, particularly the RG351P, which had fantastic build quality. This does cheapen the A19 somewhat, and for some, this may result in wanting to upgrade to something a little bit better in quality.

On the front it offers a large and bright 3.5 inch IPS screen. I have to mention the quality of this. If you compare it to the screen on the RG351P, this one is excellent with a resolution of 640*480 compared to 320*480 on the RG351P. It is bright and very sharp, making it gorgeous to play the many thousands of games on it. 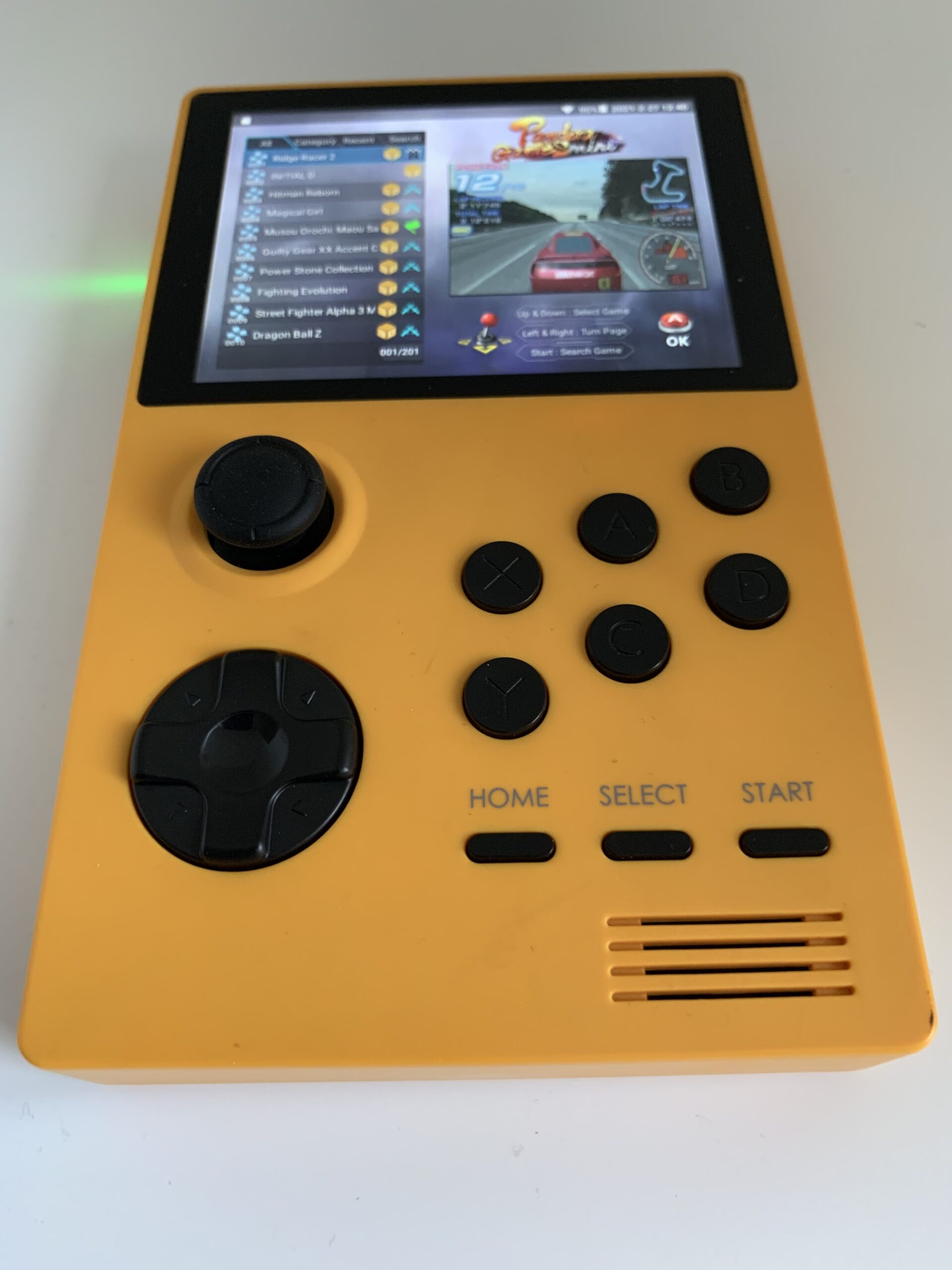 Below the screen you will find the controls. There is a small analog joystick and a traditional D-pad, both of which feel very good quality and great to use. There is only one caveat, which is a big one that may put many off from buying this handheld: Both of the control types are not independent to each other.

This means when playing some games, you will not have enough buttons to utilize, which will make some games unplayable.  It would have been prudent of the designers to change this setup from the original A19, particularly as many gamers were quite disgruntled by this. 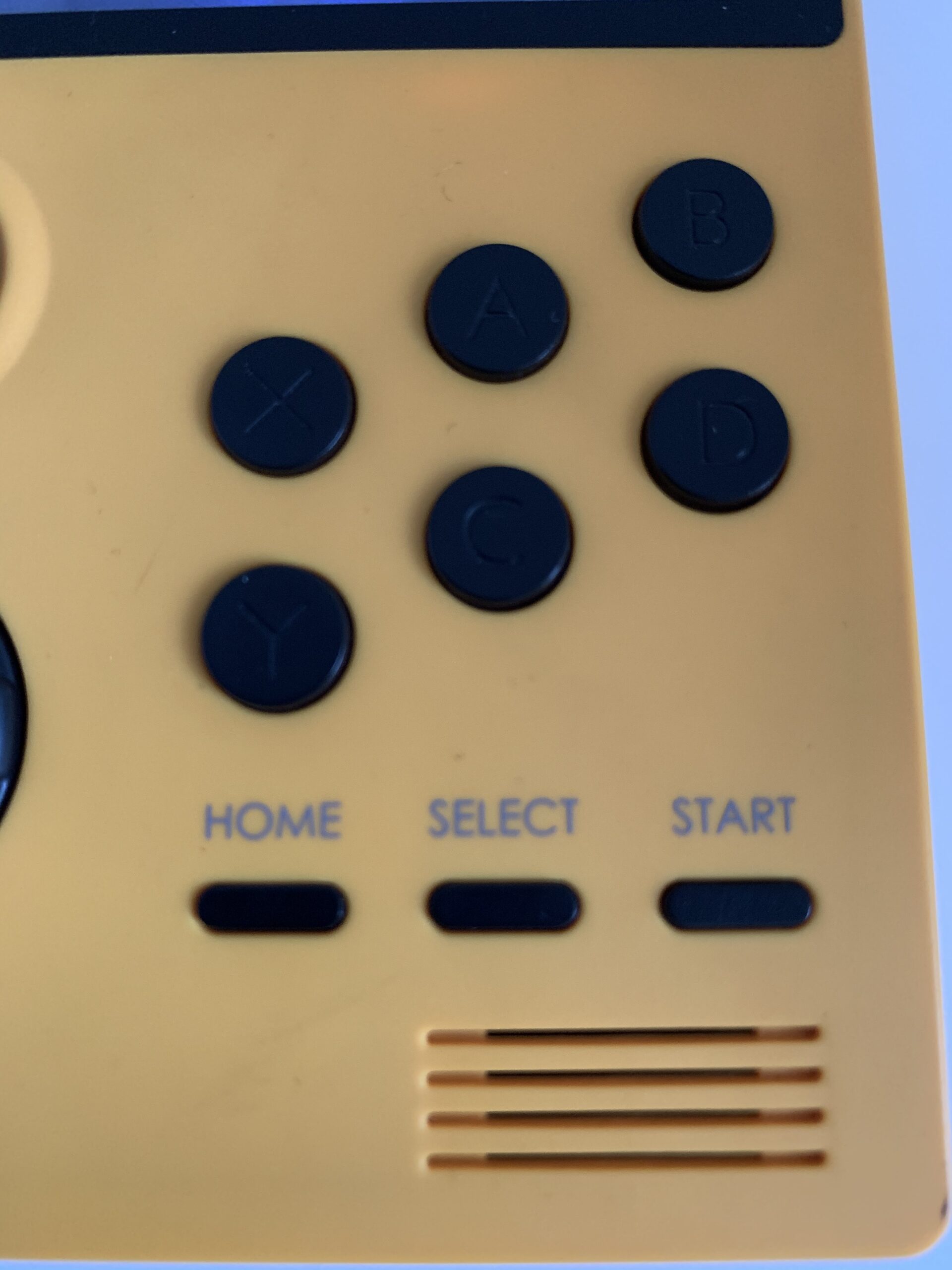 Along from the D-pad you will find six buttons: A,B,C,D,X,Y. The two additional buttons will come in handy though as, unfortunately, there are no L1, L2 or R1, R2 buttons, which again is a downer for some games requiring those buttons, such as some Dreamcast games. However, all is not spoilt as you can map the buttons for different games, and you can also connect a bluetooth controller to it. I was able to test connecting an Xbox One controller to it, and it worked flawlessly with no input lag at all.

Then there are also Home, Start and Select buttons, which you will use to launch games, add credits and to access the main system menu. 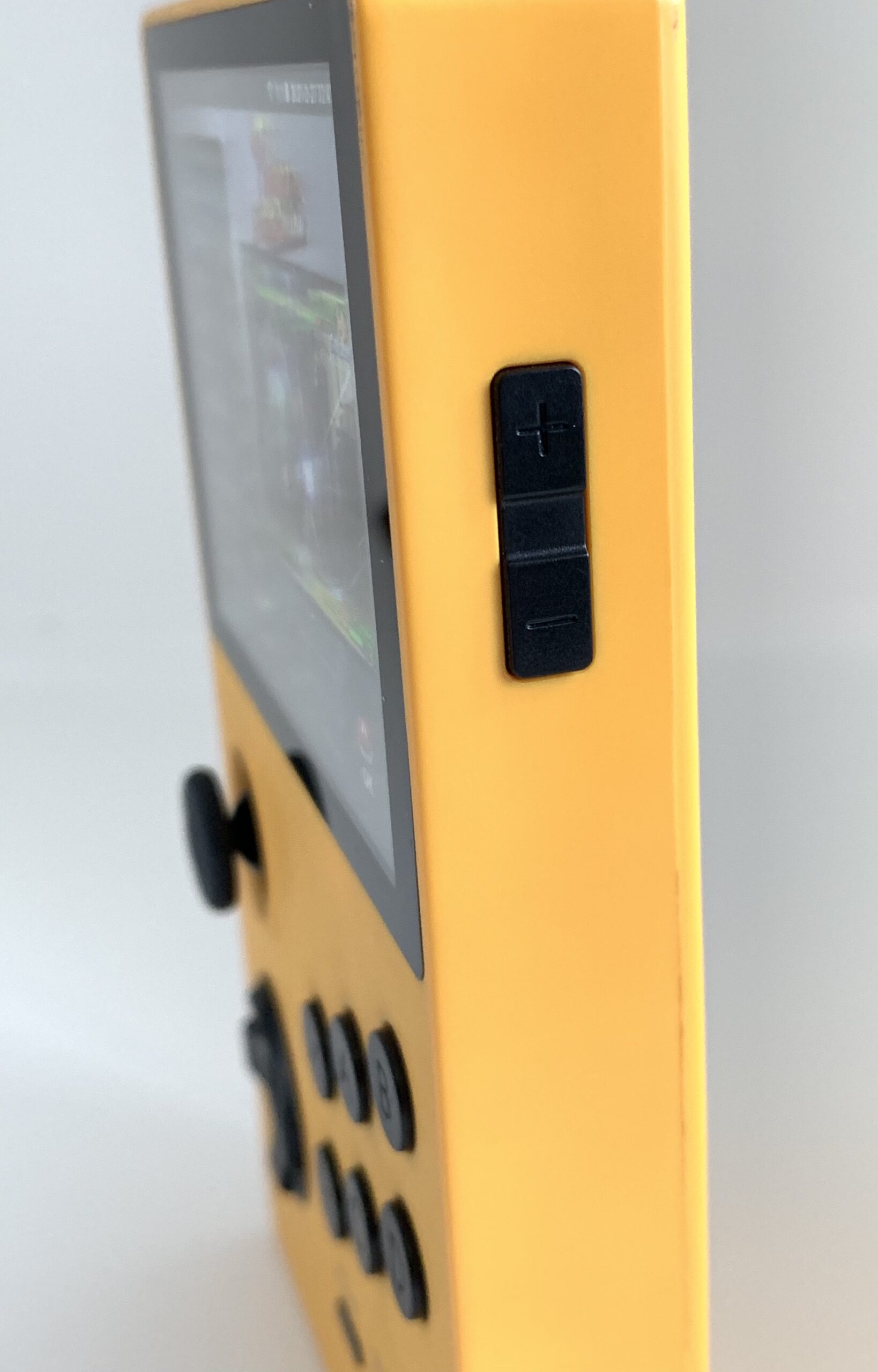 On the left side of the A19 is the power button and a green LED indicator, which is far too bright and very distracting if you want to play with the lights off. On the right side is the volume control. 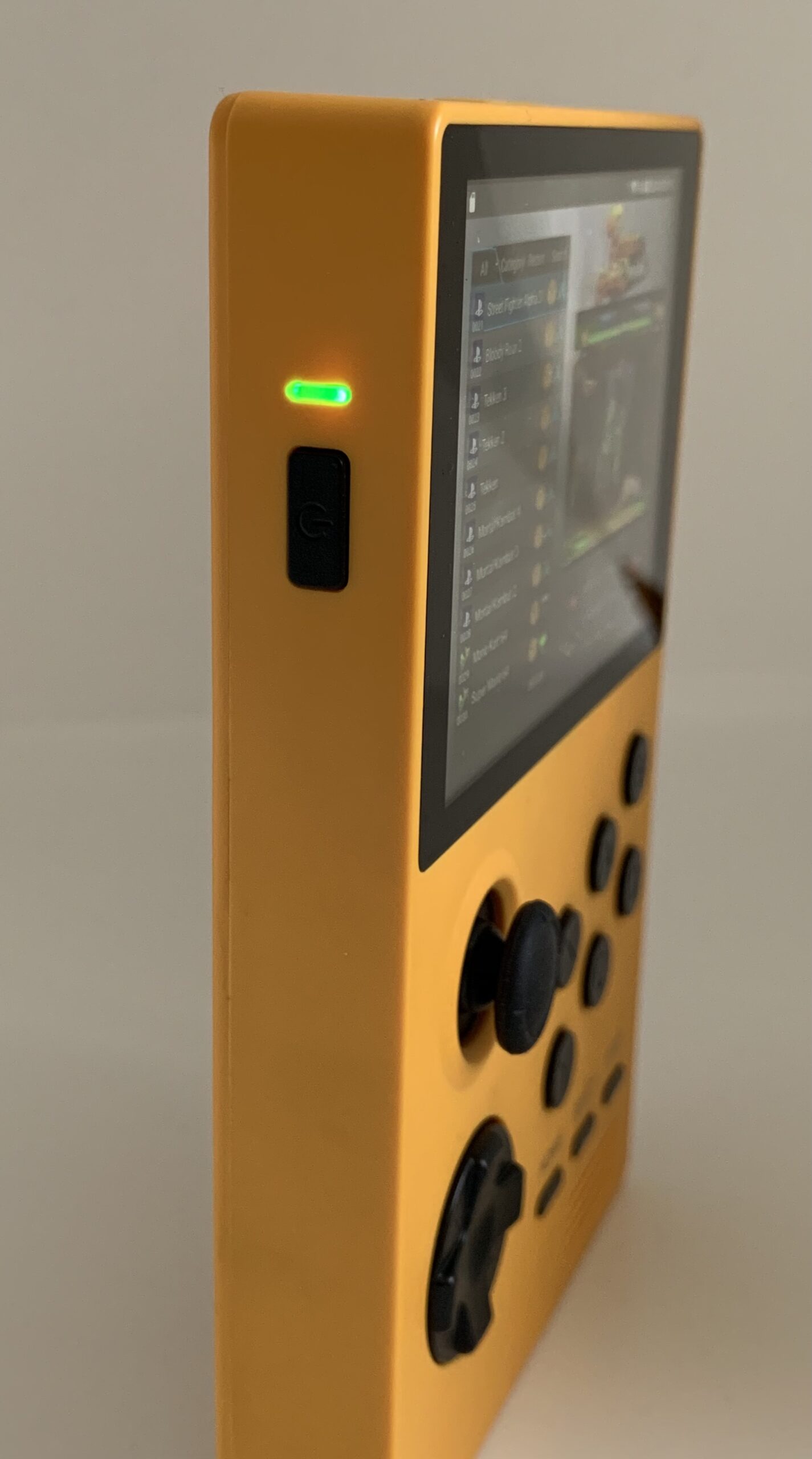 Looking at the top, you will find a micro USB port for charging, a micro SD card reader, 3.5mm headphone socket and a micro HDMI video jack. The A19 came with a 32GB micro SD card, with included games pre-installed. However, as with many imported handhelds, it is always better to upgrade the SD card with a named one, such as Sandisk. 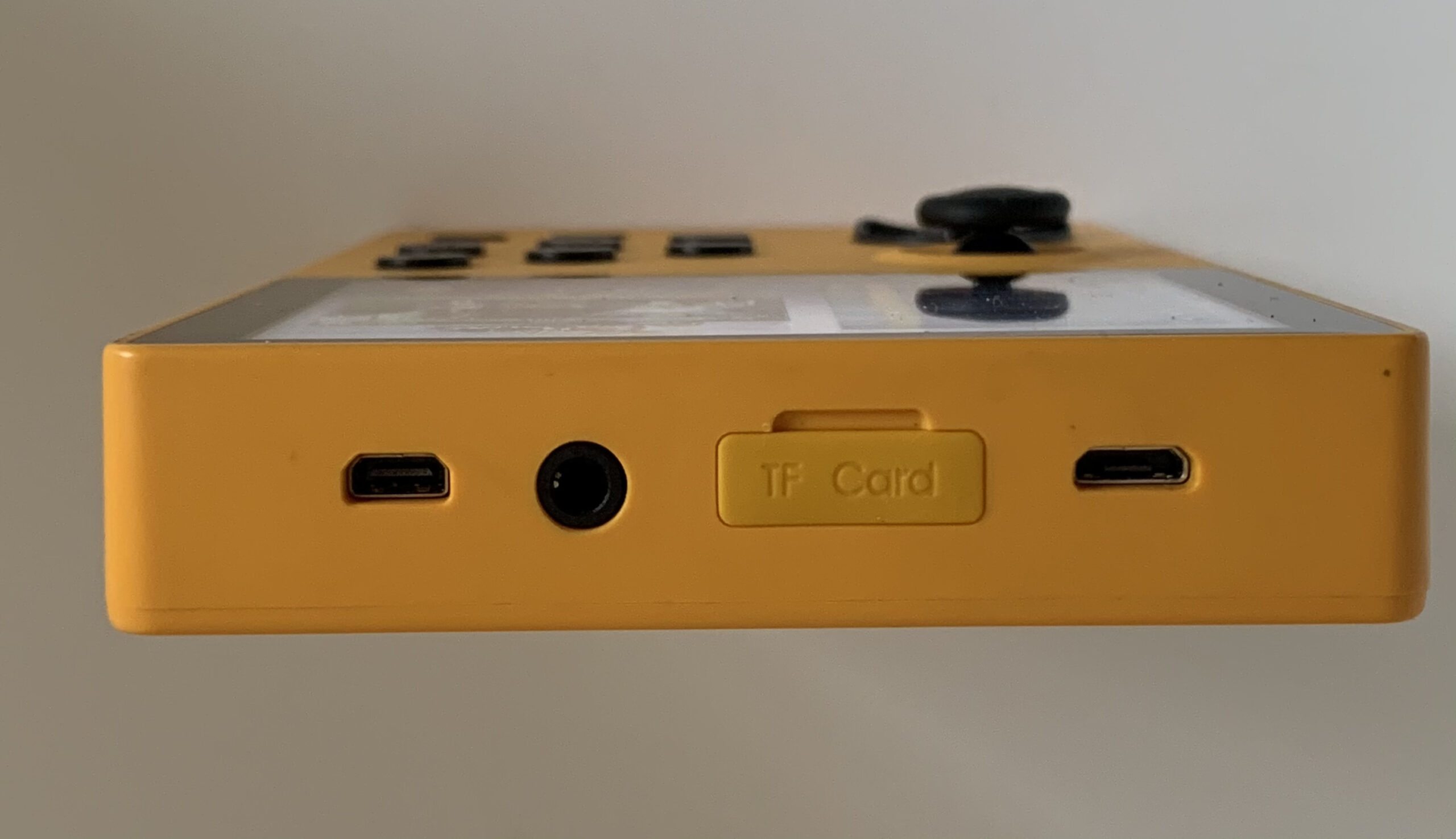 The A19 is powered by a Cortex A7 quad-core Soc clocked at 1.3GHZ. As mentioned earlier, 512Mb of RAM, 4GB internal storage as well as a 32GB micro SD card. Whilst it runs on Android, the software is dedicated to running the games and is hidden by the system

The A19 interface consists of several tabs along the top: All – which allows every game and system to be listed and requires you to scroll down the screen. I can’t see many people using this option as there are far too many games to list. Category – allows you to choose a particular gaming system, such as PSP, and you can scroll through all the listed games in that category. Recent – allows you to see which games you have previously played. Search – allows you to search for a particular game, and it will show up on the left side of the screen as you type.

Whilst the A19 may not be able to play every emulator out there, it can still hold it’s own when playing the main ones. 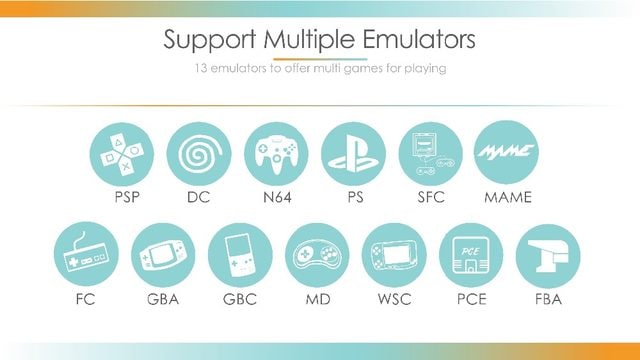 The main selling point of the A19 for me is the Games Market, and whilst I don’t condone downloading games you don’t already own, this is still a great feature and literally gives you access to thousands of games. 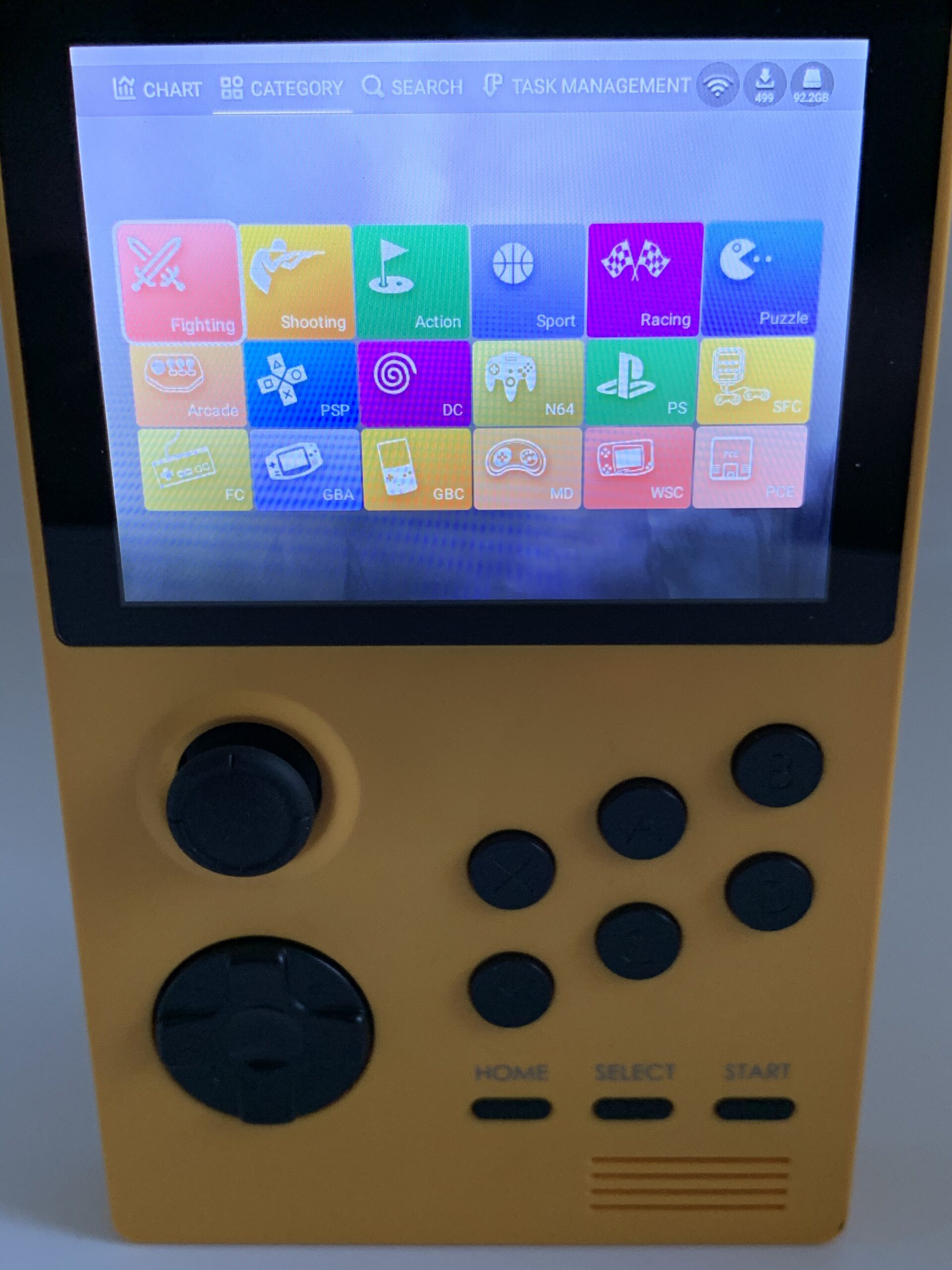 Performance tends to be a mixed bag, with emulators for the  PSP and Dreamcast struggling to play some of the more intense 3D games. But generally most of the other platforms stand up well and work as they should. Just don’t expect to be playing the God of War series, and you won’t be that disappointed with what’s on offer here.

Overall, the A19 is a decent handheld gaming device. It has a nice screen with decent buttons and plenty of games to play. If only it wasn’t as underpowered as it is, this would have been a remarkable device to own. 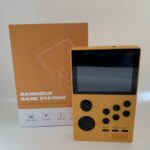 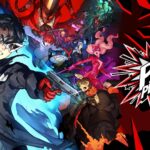