I was quite young at the time, but one of the things indelibly etched on my mind from the days of owning a Speccy and an Amstrad, aside from screechy loading sounds, is the Gremlin Graphics logo. The bold green design, slanted rainbow and futuristic 3D lettering seemed to jump out at you from the cassette inlays that it graced. And it was absolutely everywhere.

That’s because Gremlin were one of the powerhouses of the British gaming scene that exploded during the mid-1980s, publishing and developing a tonne of games for a variety of 8-bit formats, including the much-loved Monty Mole and Thing On A Spring games, Jack the Nipper and Footballer of the Year (I still occasionally find myself humming Ben Daglish’s catchy theme tune in the shower).

They later moved onto the 16-bit platforms to produce Amiga mascot Zool (he’s an alien ninja not an ant!) and some of my favourite racers of all time, the Lotus and Super Cars games (not least because of the music). Then eventually onto PlayStation and PC to bring us the ground-breaking Actua Soccer games, over-the-top four-player shooter Loaded and wacky 3D artillery game Hogs of War (under Infogrames). Impressively, over the best part of two decades they were involved in bringing over 200 games to market and at their peak employed around 300 staff. 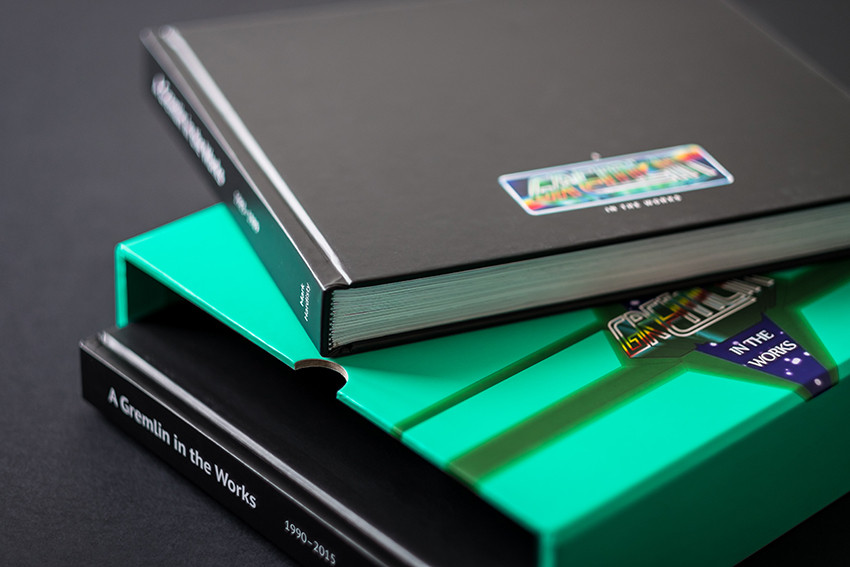 Chronicling the stories of many of these games and the people behind them is Mark Hardisty’s A Gremlin in the Works – a massive tome totalling 572 pages divided between two landscape hardback volumes and presented in a rather nice cardboard slipcase sporting the aforementioned iconic emblem.

Hardisty, an avid 80s gamer and Gremlin fan, grew up in Sheffield where the company was established and even used to visit the shop from which it all began. In 2011, he launched Games Britannia, a series of school festivals in collaboration with Sheffield Hallam University that celebrate the city’s gaming heritage, which is how he first came into contact with former Gremlin supremo Ian Stewart. Hardisty wanted to bring the story to a wider audience and after securing Stewart’s endorsement and help in contacting other Gremlins, work on the book commenced in 2014.

Like many other published gaming histories, the narrative of A Gremlin in the Works is stitched together from a series of interviews with those who were actually there. Numbering more than 80, contributors include many of the designers, coders, artists and musicians that worked on Gremlin’s best known games, as well as the managers and business partners, and even journalists.

Together, they provide a warts and all account of a pioneering software house that enjoyed an incredible amount of success and helped launch the careers of numerous gifted developers, many still leading the industry today. It charts Gremlin’s rise and fall, from its humble beginnings in 1984, born out of the bustling Carver Street software retailer Just Micro, to their first commercial success with Wanted: Monty Mole, through to the boom years of the mid-1990s and the tragic closing of their doors for good in 2003. 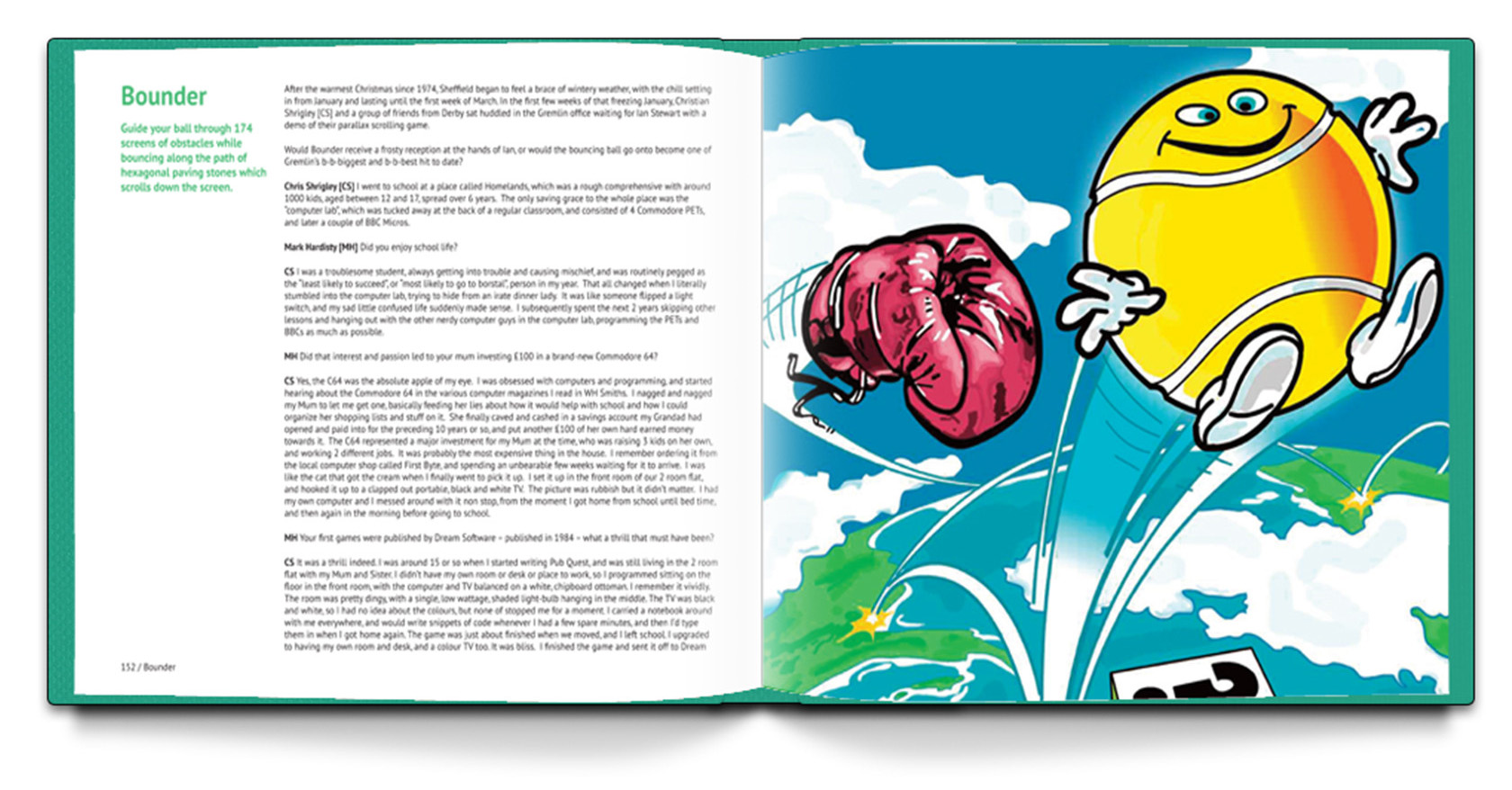 Book 1, 1983-1998, recounts the 8-bit years, beginning with the shrewd recruitment of the sweaty but talented bedroom programmers who used to hangout in the shop below and how they went on to knock out a string of critical and commercial hits for the studio. Then moving on to the complex and often fractious relationship with CentreSoft, U.S. Gold and Ocean that led to Gremlin’s stagnation and a staff exodus in the late 1980s after a slurry of uninspired licenses, sequels and conversions.

Book 2, 1990-2003, moves on to the 16-bit era and beyond. A revival in fortunes and period of huge growth thanks to a reversion to original and innovative IP, clever marketing and their willingness to embrace new technology and ideas. Followed by a disastrous floatation in 1997, which was compounded by a number of troubled projects and ultimately resulted in their buyout by Infogrames in 1999.

The over-arching narrative is one of visionaries, ruthless deals, power struggles, moments of brilliance, poor decisions, disenfranchised employees, colourful characters and touching relationships, all punctuated by humorous anecdotes and quirky trivia. The fortunes of closely-associated developments houses, like Magnetic Fields and DMA Design, as well as the independent studios set up by former Gremlins, such as Core Design and Sumo Digital, are also very much a part of Hardisty’s biography. And Gremlin’s role in the maturation, growth and professionalisation of something that began as a provincial cottage industry and ended up as the global multi-billion dollar phenomenon that we know today, is rightly emphasised. 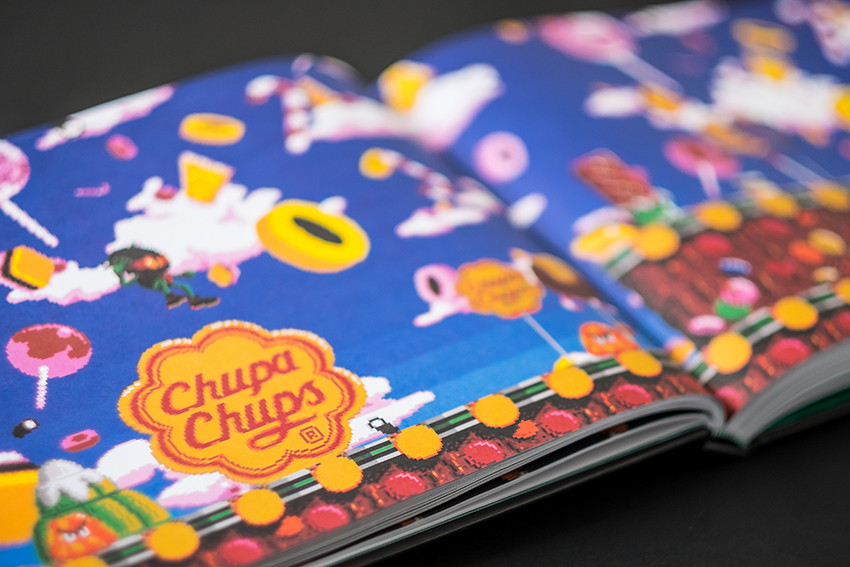 I enjoyed A Gremlin in the Works. It’s an authoritative and exhaustive account, and I learned a lot in the process. Hardisty’s passion for all things Gremlin and the eras they spanned pervades the entire book. It looks great and it’s well made. The layout is clean and crisp and the text is occasionally enlivened with beautifully reproduced screenshots and artwork, some of which the author painstakingly restored himself as the originals had been destroyed in a flood, as well as a raft of staff photos and archive material. Though I would have preferred additional game-related imagery in place of some of the less interesting letters and administrative documents that featured.

He also does a good job on providing multiple perspectives to many of the events that take place in the story. However, I felt that the business and logistics aspect of the narrative took too much precedence over insights into the creativity and technical ingenuity behind the classics we loved and still revere.

The excessive amount of detail can make it a difficult read at times. The flow disrupted by too many overly-long tangents on peripheral characters, occurrences and companies. In Hardisty’s zeal, he’s just a bit too determined to tell everyone’s story. Consequently, I do feel it would have it would have benefited from a more assertive editor. It certainly lacks the focus and succinctness of Gary Penn’s superb account of Sensible Software or the tight editing and accessibility of Britsoft: An Oral History.

Moreover, it’s length, text-heavy nature and lack of any kind of index means that it’s not something you can easily dip in and out of or flick through at your own leisure. As such, I feel A Gremlin in the Works is really only one for diehard Gremlin fans and era enthusiasts.

A Gremlin in the Works is available to buy from Bitmap Books for £29.99